Here are the new figures from Alpine Miniatures: All in 1/35 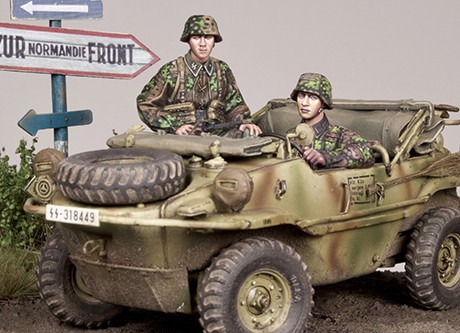 So I am going to sound like a broken record (yet again) here, these are nice, but definitely not my cup of tea - can we have some more figures other than WWII German?

I, too, will sound like a broken record, but have you checked Alpine’s previous releases?

I agree with Taesung. He has already put out American and British Figures in the last two releases, which are sublime, and I snatched them up when they were released. I am happy to have them. The latest releases will pair well with the beautifully sculpted driver and officer with the MP40. The only complaint is why the newly released figures are not paired since I already have the driver and office with the MP40. Oh well, I will just order the new figures separately. BTW Taesung has already released an American GI pair that fits well with the Bronco Jeep. We need a couple of Figures that go well with the Tamiya Schwimwagen. Looking forward to receiving the new figures.

OK, acknowledged. I hope for more American and British figures and no more WWII Germans (we have Germans in 100,000 different poses already including eating, peeing, sleeping, yelling, laughing, crying, running, etc., etc.). Unfortunately, those sell better than Allied ones apparently so no stop to more Tigers, Panthers, Panzers, etc. in the future to go along with them. I know Taesung said that he doesn’t plan to do modern figures (due to research involved and cost/benefit analysis) but I wish he maybe changes his mind and produce some cold war figures…

FWIW I agree, out of a range of 300-odd releases there are 6 British/Commonwealth figures, all tank or armoured crew, is it too much to ask for a few infantry to the same high standards as the rest of the line? I’d snap up a couple early war BEF era infantry, same for post D-Day NWE.

I love the Alpine range, the best available as far as I’m concerned, I just wish there were more figures I’m interested in to spend my money on.

To be honest there are a fair few resin figure sets of British,American & even
Soviet jeep crews out there, however most of the crews designed for the Schwimmwagen are in Winter clothing - this is the first I have seen of
a German crew in temperate clothing - Waffen-SS or otherwise, in fact
they could be easily converted into Luftwaffe troops of the HG Division
if so desired , these figures are indeed of the usual excellent Alpine standard
and perfect for a “temperate” European setting Schwimmy !