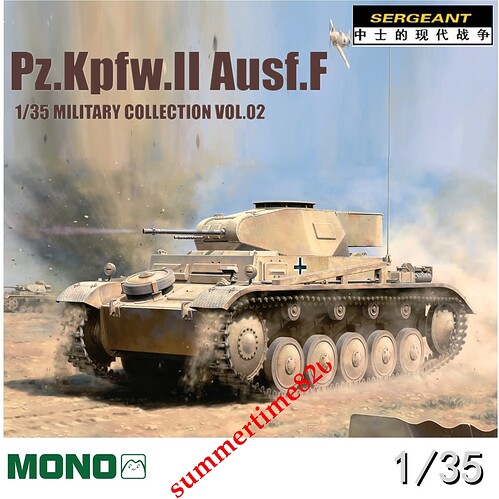 variously claims “Sergeant”, and “Mono” brands, but is also listed as a Dragon kit, and contains “Magic Tracks”.

It all looks very “Dragon-ish”!

It’s a partnership with a Japanese company named ‘Mono’ but beyond that it is just a rebox of the Dragon kit. From what little I can find, this is just some kind of distribution deal for the Japanese market although you’d think they’d already have had one by now.

They are only doing select vehicles for the program and I assume they are all in Japanese text.

Well Magic Tracks are a good thing,better then having to replace DS Tracks.

Pretty expensive for such a liitle guy though.

Pretty sure the Academy kit is cheaper. Don’t know the quality though.

That’s a lot of detail to be hidden under that one hatch on the turret.

Will they offer one without the interior?

No, because Dragon doesn’t have one anymore since they discontinued a large number of their older and duplicate kits. And this is a rebox of the 2007 release, which the interior was added to in 2015.

At any rate, not likely worth it at twice what it originally sold for.

From what I understand, it is all to do with how the Japanese taxes are calculated. Japan has a higher cost for importing wholesale goods (aka Dragon labelled complete kits), but import as a manufacturer of parts and wholesale out under your own Japanese owned label, and the cost is greatly reduced. One of the reasons why Italeri is sold under the Tamiya label.

Yeah…I’ve noticed that. Chinese manufactured kits (Flyhawk, in this case) cost almost 3 times (from Japan) what you can get them from ebay Chinese vendors (with often low, or free shipping). Why do they (the Japanese) even bother?