NEWS: Fonthill How to Kill a Panther Tank

How to Kill a Panther Tank: Unpublished Scientific Reports from the Second World War 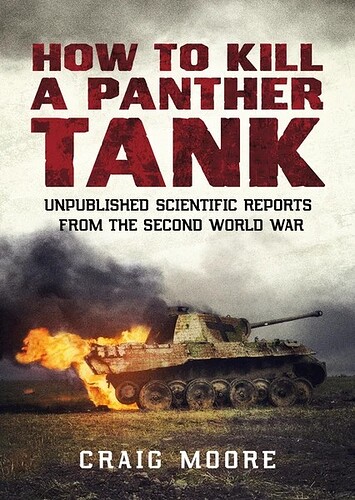 The first book to list all surviving Panther tanks, provide photographs and give their current location
Using only original official period documents from the Second World War, How to Kill a Panther Tank: Unpublished Scientific Reports from the Second World War provides the reader with the same information on the Panzer V Panther, which was available to British and Commonwealth senior officers/tank crews during the war.

As soon as intelligence reports confirmed the existence of the Panther, the hunt was on to find reliable information on how to knockout the new German tank. It was widely believed that the only way to stop a Panther was to penetrate it with an armour-piercing (A.P.) round.

Luckily, the British 17-pdr anti-tank gun could do just that, but the British were also looking how to destroy them by using other weapons. They tested high-explosive artillery shells and 20-mm AAA cannon rounds to penetrate and damage the tank’s rear engine deck and puncture the vehicle’s radiators. Loss of water would cause the engine to overheat and seize.

Tank radiators were large, and spares were not carried on the tank. If the Panther could not be recovered back to a maintenance depot, the crew would abandon the tank and disable it with internal explosive charges.

Interesting, where do you get this information from?

Directly from the publisher:

How to Kill a Panther Tank: Unpublished Scientific Reports from the Second...

Using only official period documents from the Second World War, this analyses how to kill a Panzer V Panther tank...