Not really WIP but a failed casting work :D

Just something funny and sad to share. I read somewhere that you can’t use a rubber original part to make a silicone mold. Had to try it myself and a total fail.

Some chemical in the rubber original reacts with the silicone mixture and prevents from curing.
Here’s what they look like after trying to cast resin copies of 1/35 RFM M-ATV wheels. 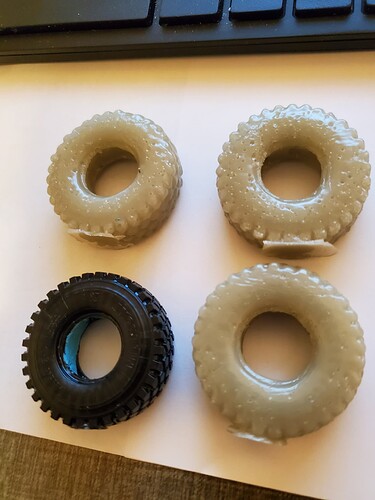 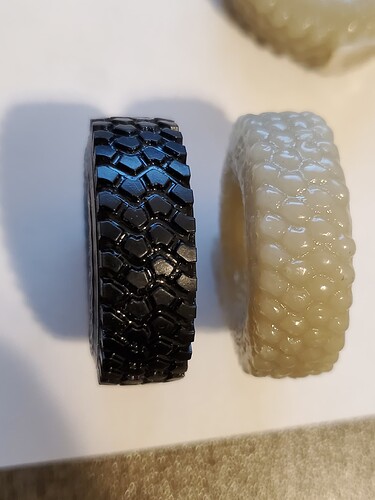 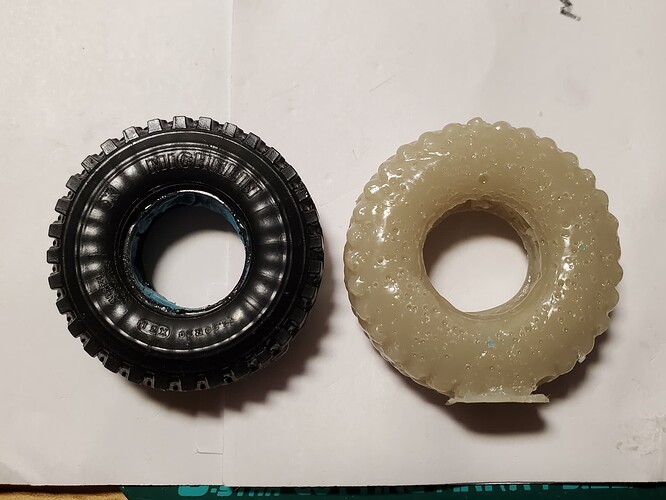 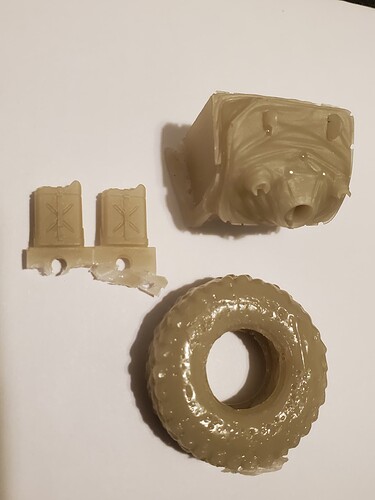 Live and learn I suppose.

Looks to me like your resin is old and not fully curing. I have had this happen before. Best bet is to throw out your current resin and replace it. The rubber tire should have nothing to do with it.

I don’t think it’s the resin b/c other copies I’ve made with the same resin (which is fairly new btw: bought a few months ago) came out fine. A Google search turned up some blogs saying that petroleum product can prevent silicone mix from curing fully.
Maybe some of you successfully resin casted using petroleum rubber original?

Perhaps a coat of primer on one of the tires would act as a barrier between the silicone and vinyl, preventing the chemical reaction and allowing for a good casting.

It may be possible to test if primer works as a barrier without painting an entire tire. If the tires came attached to a sprue, use that for the primer test. Otherwise, perhaps take a thin sliver of vinyl from inside a tire where it will not be noticed. Mount the sprue or sliver on a flat surface and paint it with your favorite primer. After the primer cures, place a few drops of silicon molding compound onto the primed sample, making sure the silicon does not touch anything but primer. If the silicon molding compound cures, there is strong evidence the primer will serve as a barrier and allow casting. Such a test would only require a small amount of material.

Anyway, I hope you have better luck with your next casting effort.

I well know it sucks to waste a bunch of time and material on a project, only to discover the result is toxic glop.

Ditto to what Damraska wrote above.
That softener in the “rubber” tires can also affect the styrene in the hub.

You need to use a different mold material. Ask your local friendly dentist to get some poly vinyl impression material. It’s very accurate and the rubber original won’t be a problem.

I would try a different batch of resin from a new container and see what happens.

Probably not worth the ROI b/c dental impression materials are not cheap. I plan to use a resin original next time or apply a coat of primer on the rubber original first like Doug suggested.

Your dentist may have some stock he no longer uses. We’re a curious lot. Some new product comes along and we can’t resist trying it. Or… sometimes we get samples and never use them. It’s worth asking.

The problem may just lie in your resin being expired. That can happen too.

I cast resin copies of rubber tires for tamiya dessert rats truck.reason being I found the original rubber tires to split after not really much time,I used Shep Pains method to cast the new,lol,that’s when I found I had to recast the tire mounted to the rim cause thr resin tire wouldn’t stretch to for fit,after recasting them all over,they came out just perfect and I had 4 spares without rims,sorry I got windy,hope your next attempt works better and did you use a cast realese agent

I’d say wrap those (failed) donuts in a tarp and use’m as cargo.

Yeah, that sounds like a great idea! Thank you for sharing.

I’ve got a bit of casting experience and I would try using Mann Ease Release on the original tire. Unlike a primer it is easily applied and removed. It sprays from the can in a super fine mist that coats the subject in a incredibly thin layer of a waxy substance which doesn’t obscure any detail and yet creates an excellent barrier. I think that would prevent the chemical reaction you’re seeing. While I don’t know if the “rubber” wheels are the same formula as the ones I have dealt with, I have made excellent molds of original kit tires using this technique.

BTW, you can use Mann’s Mold Release on the mold the way it was intended and it makes the removal of the castings a breeze. While some hobby shops might still carry this I’ve found that a good source are any local fiberglass repair or manufacturing shops that might be nearby. They use it all the time to help keep fiberglass from sticking to molds etc.

Thank you so much for the tip, Jim! Good stuff.