To make the old style camo nets used before the current type came out, what do you guys suggest using to replicate the burlap or other fabric that was woven thru the netting to give a disruptive pattern? I know that gauze works fine for the netting in 1/35 scale, but what would work for the burlap?

Carlos, I might be the man here (!), not least as a young soldier being detailed-off (tasked) to “garnish” - as was the military term back then, at least in the British Army - both types, that is the Hessian strip type and the then, new plastic scrim. There’s 2 x days of my life I’ll never get back. However, in 1:35 I’ve tried a couple of experiments and to be honest, the jury is still out. I’ve used strips of Tamiya masking tape, which being relatively untextured doesn’t quite pull it off, but I’m somewhat at a loss to provide anything better. We are talking, after all, about 1:35. However, see my “FV 4101 Charioteer Tank c.1955” for a depiction of such a stowed net (somewhere within the Cold War bit). Sorry, I don’t quite know how to cross-reference this.

For a deployed net, ie draping a tank, perhaps my Conqueror is worth a look (using Tamiya masking tape): 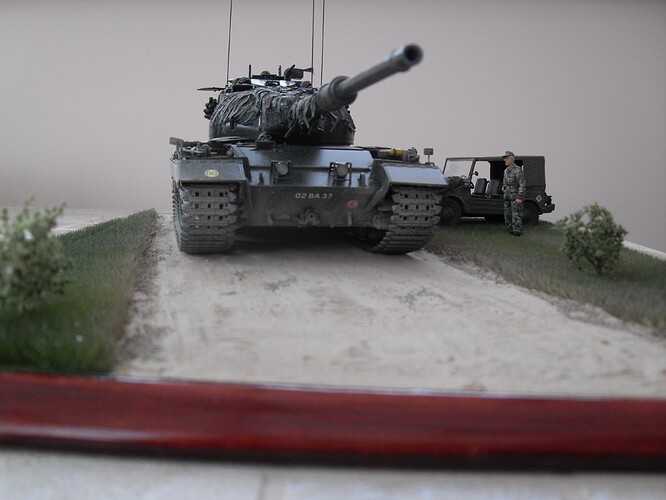 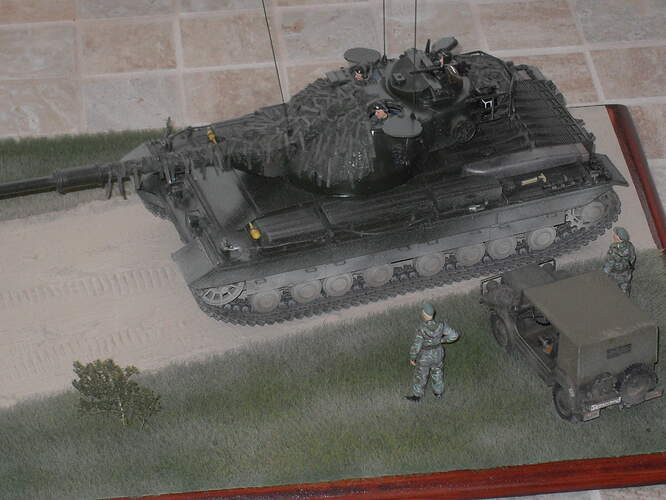 I think if the tape is rendered perfectly matt then it might work; I’m aware that my model falls short a fair bit.

If we’re talking the more involved net say, on fixed artillery positions, and the inter-woven effect, than I’m afraid I haven’t gotten around to that just yet.

There was a useful article in a recent Tankette magazine (subscriptions from only £16 a year - see mafva.org for details) about these garnished nets. The hessian strips were woven in and there were several patterns used. As I recall, the redoubtable Mike Starmer was the author.

I realise this is sod-all to do with modelling!

@RLockie, thanks for the tip about the article in that gazette. I’ll keep that in mind.

@BootsDMS, Brian, thanks for the direction to at least think. I recently used some fabric medical tape as aircraft seat belts. I was kind of put off by the fraying edges. But… the fraying edges and texture of the tape would be worth a shot as hessian scrim/burlap… two peoples indeed separated by a common language

No worries about the family stories of life during wartime. I am always good with such yarns. I remember my mom’s tales of the time. Not to mention those of other family members. Of course your family’s were probably more like the film Hope and Glory. Gotta love how that one ended for the boy… every schoolboy’s dream! Thank you Adolf!

Yeah, my family was sort of surreal in that I ended up with an uncle who was in the Waffen SS(!) I mean what the hell?

I have used a similar method as mentioned above, gauze and painted Tamiya tape.
This is what it looked like in the end. Perhaps if I was better at painting it would look better. 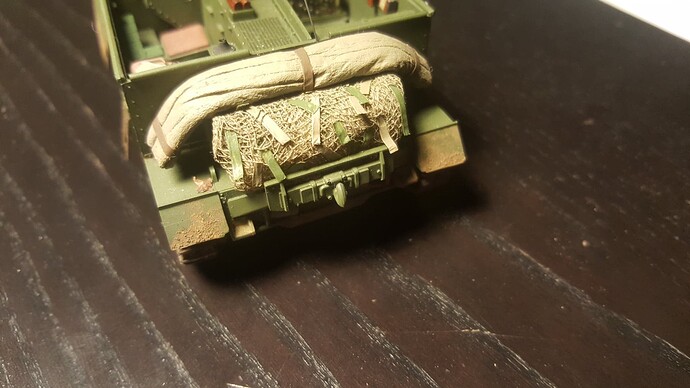 @VladPanzer- Thanks for that… That’s along the line that I’m thinking.

One other item for consideration, that fine shredded cellophane used in Easter baskets. If it is shredded fine enough. But it has zero texture.

In an attempt to help make it look more real, it was applied in layers as I found one application just looked too thin. It was simply manipulate gauze, add strips, let dry, then repeated maybe two more times. 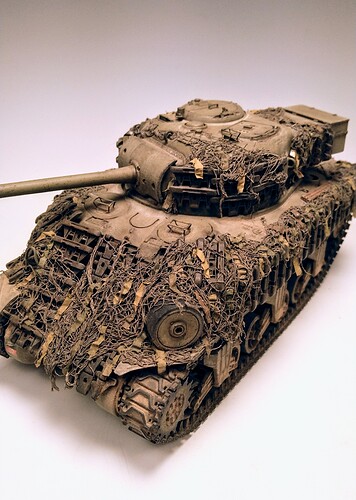 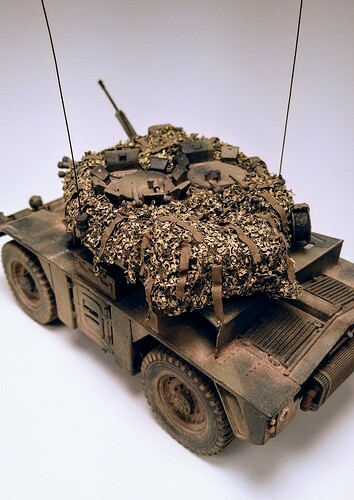 As for the other style mentioned, I’ve messed around in the past but have yet to complete one to see if it’s worth all the painstakingly tedious work. It requires another type of gauze and carefully cutting the fuzzy strips from it and attaching them to the regular gauze.

I eventually gave up, but I think it has promise. 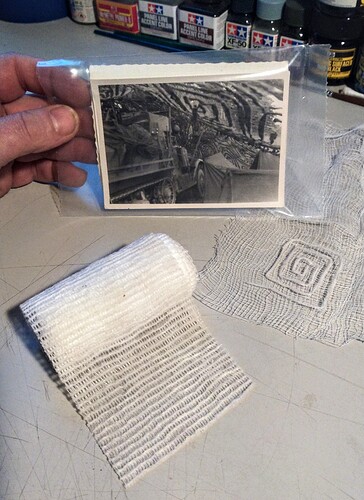 Now if you just wanna show a rolled up one stowed on the vehicle and don’t want to bother with making it, you could try Thachweave. Scroll down the page a bit.

They are wonderful people and I believe all the products are hand made by his wife.

As I see it, packed or stowed cam nets aren’t too bad to model; it’s the deployed nets, either on something static or draping a vehicle which can be difficult to master, and I certainly don’t claim any such mastery; my Conqueror achieved a certain effect but that was about it (and I’ll try and get some better pictures soon). The thing is, in addition to Hessian strips in around the mid 60s - or at least in the British Army - the Hessian rolls which I recall came in 2 x colours, were augmented by a plastic strip-type. This came in rolls, olive green one side and a brown the other. This was also used on cam nets, together with the older Hessian tape, or in its own right. All strips, whatever their origin, in my experience were tied on at least at one end, before being wrapped/woven into the net itself. This means that whilst say, Tamiya masking tape may appear to be too smooth, lacking much texture, it at least can be used to replicate the plastic-type.

I have a plan, not to be augmented anytime soon I’m afraid, to experiment with fabric-type plasters, the sort one applies to a grazed knee or similar wound. I’ve used this before to replicate a Belgian-type cam net which was extremely finely meshed (and actually incapable of having any scrim attached, but as a concealment medium it certainly dulled down the vehicle). I just wonder if strips of this might work as decent Hessian strips on a deployed net.

Just an idea and sadly I’m not in any position to experiment anytime soon - I’m currently booged down with far too many modelling tangents!

try Thachweave…They are wonderful people and I believe all the products are hand made by his wife.

I second the Thatchweave recommendation. I used their products for the bumpers on my Ford GPA a while ago. They are easy to work with and look great. Since they are actual thread, you can stain them any color you want as well. I soaked them in coffee for a while to get a natural color. 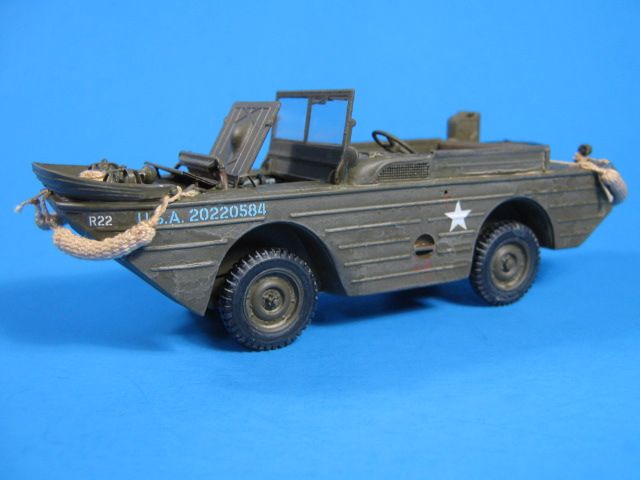 Gino, I have to say that at first glance, their nets don’t quite cut it for me; they’re just a bit too neat in my opinion and the mesh appears to be quite large; of course, it may well be that they can be adjusted and modified, but for a stowed net it isn’t that arduous to make your own. My personal opinion of course, and those bumpers look just fine

To replicate a decent net I fashion a ball of Milliput to conform to whatever vehicle I’m stowing it on, and add medical gauze to it, and then apply some Tamiya masking tape strips; I then repeat this a couple of times ensuring that some of the tape strips protrude though the net mesh and dangle or scrunch up as per the real thing. Some decent tweezers help here and you may wish to tackle this in stages allowing the Milliput to dry between layers. Repeat until you achieve a decent density of both net and scrim.

You can then add thread around the bundle to represent securing straps and pull it as tight as necessary to replicate it being lashed to a vehicle’s securing bracket; make sure this marries up with said brackets; in most cases the strips/net will obscure the thread which would normally represent the real thing whereby the bundle of Hessian and netting sort of bulges everywhere. Let it all dry thoroughly and then superglue to the model. It’s all a bit laborious but isn’t that taxing.

Thatchweave is prob’ly the best. If you want to make it yourself, try first aid materials. Gauze and bandages come in a variety of materials and textures. I use gauze with a wide/coarse weave for the netting, and really tight material for the burlap/hessian bits.
Ken.