Panther that sat out behind the Patton Museum for years with my digitally repaired road wheels and tracks.

Panther on the Hunt; Battle of the Bulge??? 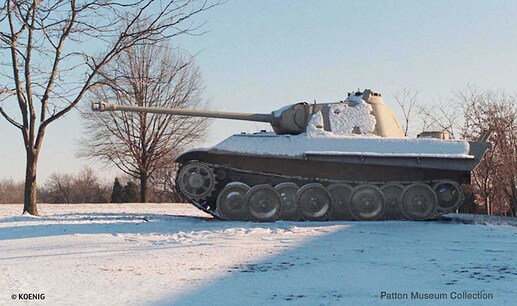 I remember that one when I was stationed there from 88-92.

Those are some really good looking Panthers. I have a fondness for them as well but only three built, none in dioramas.

How did the Wehrmacht have Panther hulls to spare for Bergepanthers?

Rouge - that is a question for someone else to answer. Clearly they made recovery a priority. I thought at least some Bergepanthers were based on rebuilt older tank hulls.

You make a good point – perhaps they used old, recovered hulls for which the turrets were unusable, but the hulls still functioned. I hadn’t thought of that. I assume they were able to at least slowly drag panthers with whatever other recovery vehicles they had before.

The Germans (by necessity) where definitely into salvage, reuse and recovery of any/all damaged equipment (regardless of source country) hence the Bregepanthers, Berge t-38’s and the Famo recovery vehicles. Then throw into the mix some heavy Famo mounted cranes, towed flatbed trailers and any number of Bilsten cranes mounted on various wheeled and tracked vehicles. These being used for considerably more than just engine and transmission change outs.