I tried searching through the “search” function, but didn’t come across what I was looking for. Regarding the Panzer I Ausf. A in North Africa, records indicate “On 17 March 1941, Inspectorate 2 ordered that equipment in North Africa should be painted two-thirds yellow-brown (gelbbraun RAL 8000) and one-third gray-green (graugrün RAL 7008)”.

I understand it was deployed to North Africa in Jan/Feb 1941, so just one month after this new scheme was ordered. All Panzer 1 Ausf. A’s references refer to only RAL 8000 being used over the previous grey RAL 7021. I assume that is accurate, and based on black and white photos I can source (google) it seems accurate. But now I wonder, were there any surviving ausf A’s (after Jan/Feb) to be painted in the new scheme? Or because the RAL 7008 is so close in color to 8000, and with dust covering the vehicles/black and white photos it was hard to see it was actually there? Pictures of the two colors for reference. Any armor experts able to verify for me, just RAL 8000? 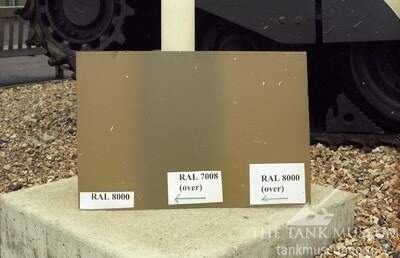 I was under the impression that most of the vehicles in the new scheme were painted prior to shipping to Africa. They also had orders to use up the old colors first which may or may not have been followed to the letter. How likely they were to repaint vehicles in the field has me siding more on them not getting repainted unless the need was really pressing–such as commandeered Allied equipment. Considering the overall lack of decent support for Rommel and the priority to service the Russian Front with material I would not think much effort was made to repaint stuff. A lot of Dunkelgelb vehicles remained free of green or red-brown markings even though they had those paints to use.

But don’t quote me on this as I read that stuff a while ago and may not have it 100%.

There were certainly not stocks of paint available early on and hence the mixture of fuel and sand/dirt to smear Panzer grey vehicles was legendary. Dust did alot to cover the grey ( much more than one might expect ) and so I often do a coat of dust or even better “aged concret” on vehicles that would not be at the front like a Krupp radio van, but use the RAL 8000 on vehicles subject to enemy fire. Paint was in such short supply that sometimes just a cross hatch or graph paper dapple was all that could be supplied over the grey. By 1942 units arriving from Europe might have the two tone camo applied but in a week in the desert, with dust it was reduced to a yellow brown. Greens didn’t come into much use until after El Alemain and in Tunisia where plant growth made greenish colors more useful. I think part of what makes the DAK more fun to model was their lack of strict use of colors, the sun and bleaching of uniforms and all of the lack of standardization of things that characterize an elite force. Think uniforms of Rogers Rangers or of the 95th Rifles. They were on their own and a long way from home and they made due with what they could find. French yellow shirts were preferred, shorts and lace up ankle boots were preferred, British jam and canned fruit were preferred, and one Panzer I Befehlswagen even used Italian pea green paint. So take your pick, but use less from Heer group orders and more from the pictures and the writings. I hope this helps in that it is hard to go wrong with any color scheme unless it looks like new.
DAK junkie

Think uniforms of Rogers Rangers or of the 95th Rifles. They were on their own and a long way from

I have a hard time finding good reference photos where I can actually determine multiple colors. I’ve just noticed the Arsenalen Swedish Tank Museum has a “persevered” Panzer I Ausf. A tank in Afrika Korps “desert camouflage”. The lighting is poor, but it is described by the Curator (I think) as dunkelgelb, not RAL 8000 gelbbraun, and with no hint of 7021. I assume they did their homework to display an authentic vehicle, but dunkelgelb isn’t until 1943, I thought?? Now I am confused, haha. 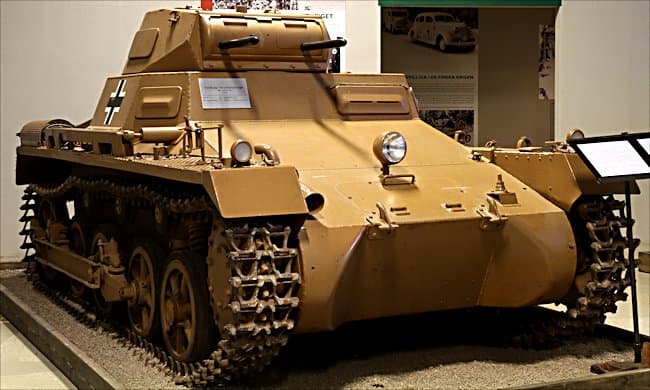 I wouldn’t rely too much of the colours on the German WWII vehicles at Arsenalen. Most of them were bought from Norway after the end of the war and they were repainted in the 70:s I believe. Some of them had a really bad job. The Stug III Ausf C is not on display for that reason for instance.
I visit Arsenalen at least every year so I have seen the pz I several times and to my eye it’s a bit too brown

Good information, tack själv, Matlev. From another form it was said that “For colour, all 5th Light arrived in Tripoli in dark grey paint. The introduction of the Tropen Scheme no.1 occurred March 17”, as I originally noted.

I guess the safe bet is a RAL 7021 basecoat with an appropriately weathered RAL 8000 top coat, as everyone else does.

Interesting discussion, I have a few DAK armour projects gradually moving up the pile, so always interested to read up on the paint schemes. 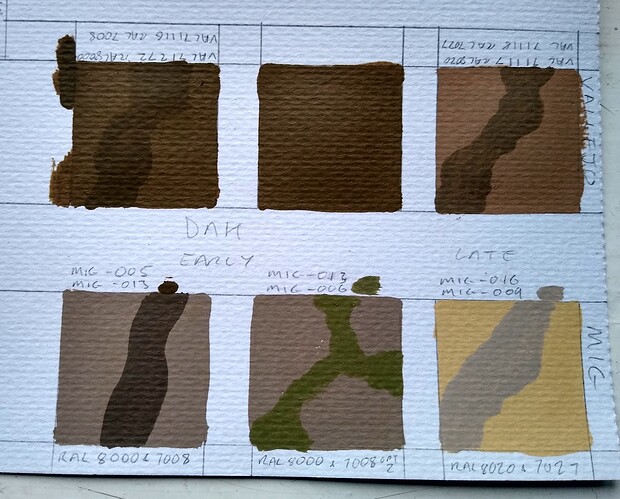 The top row is Vallejo and the bottom Mig. The photo was taken in natural daylight and with no flash.
How can we get a difference like this? I would say that the Vallejo 8000 and 7008 is close to the Tank Museum test piece above.

Are any other brands closer?

I recently bought some of the AK Real Colors and they are real close to the surviving paint samples still available.

And they don’t match what you have, although the Mig late base color is close to AK’s, maybe a tiny bit darker.

I second AK. I trust the process they went through on getting real paint samples from surviving equipment (that was original). I didn’t buy their book, but I’ve flipped through it and it seems pretty legit. Perhaps a bit of marketing, but none the less the colors look good.

I bought the African colors after discovering my old Model Masters were dried up. I liked them so much I went back and got the gray and dunkelgelb era colors to try as well. The Panzer gray looks sufficiently dark. The yellow-redbrown-green triad will make a nice variety from the colors I have been using so all my builds won’t look like the same body shop did all the work.

Thanks for the input. The Vallejo RAL8000 does come out a lot darker than expected. Quite like their RAL8020 and 7027 though.
I’ll have a look for the AK version, I do have their DAK Profile book somewhere. A bit self promotion yes, but had a lot of very useful profiles for German and Italian vehicles.

Somewhere in the stash I do have some small scale DAK vehicles to try them on before committing to a larger project.

The AK Real Colors are absolutely outstanding in both accuracy of color and sprayability. They shoot like silk and are very good brush painting also. I liked what I tried so much, I bought the entire line. Now they are all I put through my airbrush. (With some Tamiya backup.)

On everyone’s recommendation, I’ve ordered the set of AK DAK paints. Be interesting to see how they compare.

I found this video from the Tank Museum helpful too. They give an approximate paint color for all the RAL paints used (all though not reliable on our computer screens), and more particularly make mention of how they had a requirement to NOT fade.

Yes a very useful video. A lot of interesting information can be taken from that, especially the point about resistance to fading. I’ll be using dust and pigments to tone down the colour.

Don’t want to hijack the thread, but thought I would share my results with the AK paints which arrived on Friday.

The AK colours are painted on the centre test card between the Vallejo (top) and MIG (bottom). 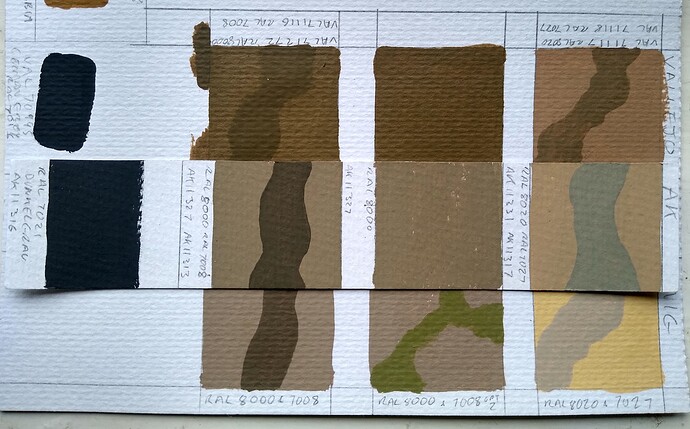 Deepening the mystery even further, here are the colours printed in AK’s DAK Profile Guide book. Again very different. The RAL 8000 seems closer to Vallejo than their own! Do have to take the printing process into account though. 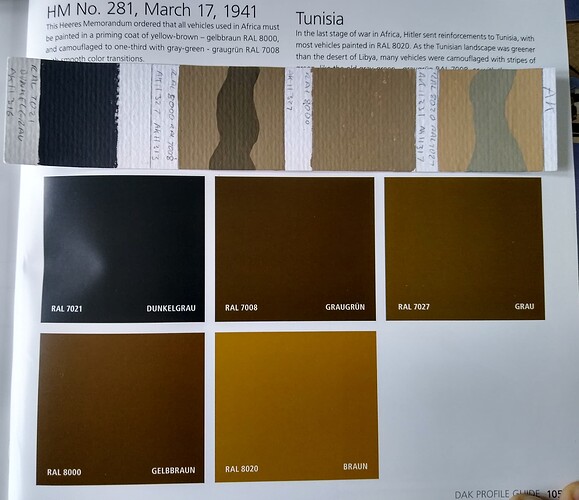 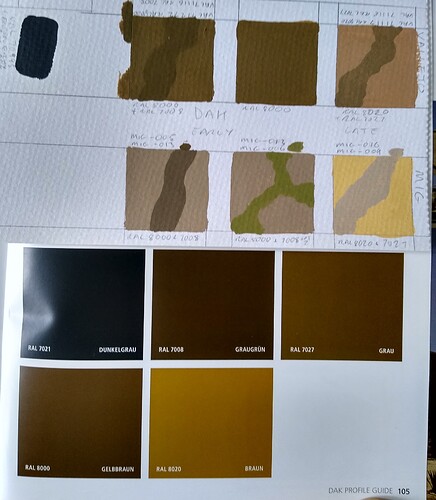 I’m even more confused as to what are the right colours! 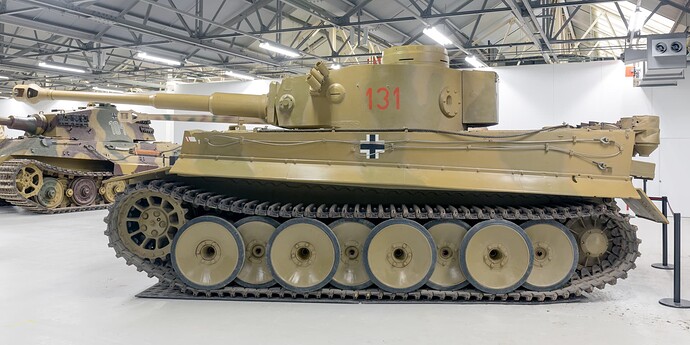 image1920×960 189 KB
Interestingly, I think both AK and the Tank Museum used a spectrometer on surviving paint chips to formulate the colors. Not sure about the other brands. Maybe try the colors on a plastic spoon instead? RAL 8000 looks entirely too dark on all of your samples… weird. Also, here is Tiger 131 in black and white. You can see the color variation, but it doesn’t stick out like a sore thumb.

I am holding my bottles of those AK colors to my screen and they are very close to the ‘131’ image. I could argue the 7008 on the ‘131’ is a touch grayer but I’m also comparing a bottle of paint to a photo on a computer LCD screen that is used mostly for gaming and not photo-editing.

Lighting and all the other variables will also make this hard, haha. I think at the end of the day if the look on the model is accurate enough for you based on reference material, then it is accurate.

It does look close, but yes we seeing through screens, so it’s never going to be exactly what the eye sees.
The AK RAL7008, looks very brown to me. Vallejo’s looks more green.

I’ll have to try them on something and see how they actually look on a finished kit. Probably totally different to on paper.
Thanks.