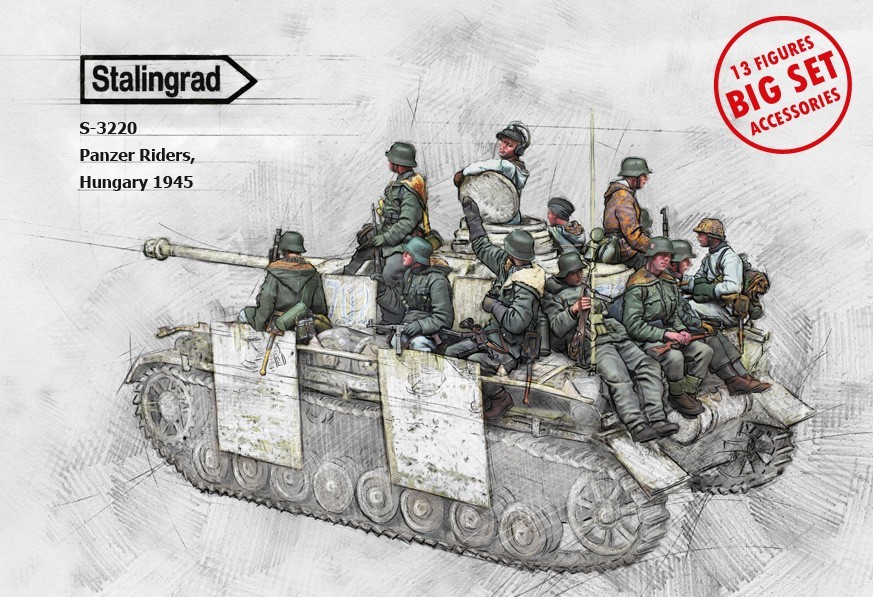 These are superb figures, but I would guess a set of thirteen is going to come in at least £50! The infantry figures are wearing the SS parka, first seen in photos of Kharkov, so belong to 6 SS Panzerarmee.

Assume you forgot to the 1?
if this set would cost 50 GBP I would by it immediately!

I think it will be around 150 Euro. Their infantry big set contains 10 figures and I saw that costs around 130 Euro…

Hope that they offer them in smaller sets as these -while terrific- will undoubtedly cost considerable.

Eek! I was thinking £4-£5 each not £10! Think I’ll stick to plastic, although I do really like the look of these figures, just can’t justify the price…

On the other hand, they often offer them individually as well so you can get the ones you want.

Some really nice poses there…

However, given the fuel shortages Germany faced in 1945, they are very likely to quickly become Panzer Walkers

Can anyone identify the type of panzer IV and unit from the inspirational pictures?
Best regards

Given 1945 in Hungary, I’d favor an early to middle production Pz IV J build before October1944.

There isn’t an air cleaner filter assembly on the radio operator side of the tank that’sso typical of the H model. I didn’t see an auxiliary muffler that an H or a G would normally have either so again favors a J model in my opinion. Seems like I see a Zimmerit pattern on the other photos, so roughly before October 1944 built Pz IV J.

It could be a beat up missing air cleaner & auxiliary muffler but that seems less likely.

Thank you very much for your answer.
I’m no expert but I was surprised to see zimmerit at this late stage of the war, but your given date of fabrication makes sense.
I was thinking of a late ausf. H and was wondering what were the chances to see a ausf H surviving this long…