Patton vs. Other US Generals

The popular image is of him being particularly flashy compared to other generals during WW2, and the Master Box kit depicts him that way. I do wonder if that is a myth, and how other generals of that era were like in that era.

Every photo I have seen of him he was dressed in his style. Part of the performance. I think it was expected of him and he expected the highest of those who followed him, including neck ties. I read that MacArthur changed his uniform multiple times a day so it always looked fresh and unruffled so everyone would think he was cool under pressure. Teddy Roosevelt Jr. dressed just like the soldiers under his command. Ridgeway always had his 1903 Springfield, hand grenade and smoke grenade.

Wonder what Patton did before entering the military?

Seem to recall he was a West Pointer?

apparently General Patton thought Pearl Handles where only appropriate for a “ pimp in a Louisiana whore house “ - his were ivory.

I’ve heard that too. My Dad mentioned he once saw Patton from a short distance, while making damn sure he wasn’t seen himself: he was on one of his trading expeditions supplying the U.S.Army with illicit alcohol… If I recall correctly my Dad’s opinion of the gentleman was along the lines of a “Loud-mouthed W@nker”; apparently a view shared by not a few of the soldiers under Patton’s command!

Author Tom Kratman, an ex military man himself, has said that flag officers are essentially politicians themselves, having to be approved by politicians to gain their offices. He served under Norman Schwarzkopf and wasn’t impressed by him.

Ivory not pearl. Patton’s career goes from West Point to chasing Pancho Villa with Pershing. Believe Patton was first to use cars in a motorized attack there. WW1 tanks in Europe. All before WW2.

Certainly more flashy than Bradley, the “G.I.General” who always dressed down until he became Army Group Commander and wore issue steel glasses.

Petraeus, who as I recall did not win anything: 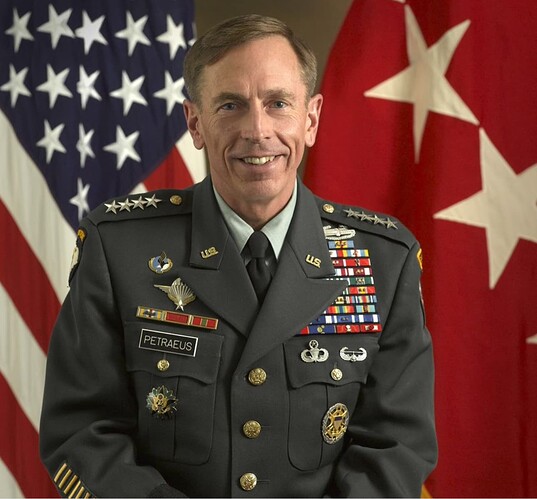 Eisenhower, who, well, you know… 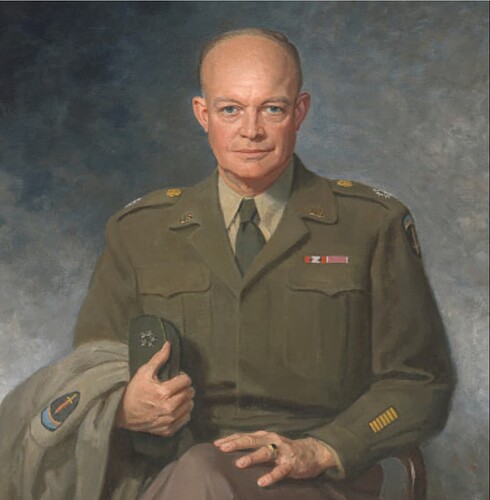 Patton considered that discipline, to include self-discipline was essential to good, effective moral, spirit and pride. To him, the proper wear of the uniform was an external reflection of this discipline and pride. He also believed that leaders led by example, to include being in the proper uniform, so it was only natural for him to “dress up” for the occasion. He thought that his troops expected it and that reflected in their pride in their units (quite literally, their “esprit d’corps”).

His appearance was the physical manifestation of his philosophy of leadership and command.

You can agree or disagree with this philosophy, but you can’t argue with the results, winning battles and campaigns in time and space conditions that others considered impossible.

Not only did Patraeus not win anything of note, he got his metaphorical (and his division’s literal) a** handed to him during Operation Anaconda by the Taliban and ISIS.

He left his division’s Apachi’s and DIV ARTY back in the rear at Ft. Campbell while he ignored all the intel about the Shah-i-Khot valley, had to rely on the USMC Cobra’s to bail him out, while he flew his troops into predicted hot LZs through identified AAA kill-boxes.

FWIW, I think he’s a totally incompetent douche bag. He would fit right in with the current Russian army.

Might I recommend Carlo D’Este’s excellent biography of Patton. Well written and well researched it does much to explain the man vs. myth. You should also consider Patton’s War as I Knew It. Kind of diary like but gives great insight to Patton’s psychology during the war. Stay away from Ladislas Fargo who wrote the book that the move was based on. Recent scholarship has shown him to be somewhat of a fraud.

“If this story was to have a moral, it might be this - Just name a hero, and I’ll prove he’s a bum.”

Yeap, the D’Este book is fantastic I have to agree.

Is that still in print DV ?

Thanks DV… Will be looking into that little gem