So I thought why not show what you had as a ride during your service years. I for one would be very interested to see what people used and abused in their military life (vehicles only lol

)
I did the Golden memories group build but that is now closed, but this thread will be purely for completed builds that show what you were crewed in etc, they can be ancient builds that you kept photos of, or recent builds.
A bit of a back story as to when you were crewed on it etc would be good as well…

I will start the ball rolling …
When I was first posted to BAOR I was crewed on Chieftain, upto Stillbrew Mk10s and Mk11 TOGs.
This is a recently completed Mk10 I was on in BATUS during one of many Medmans… 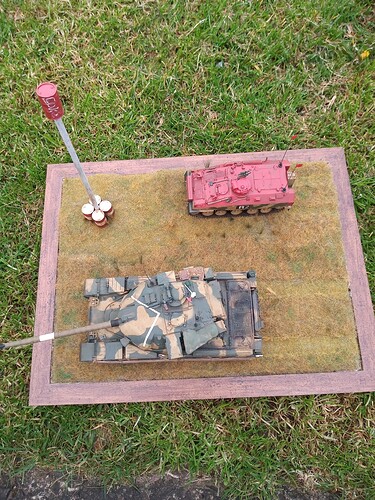 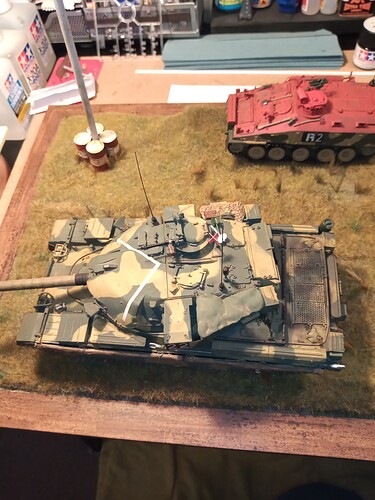 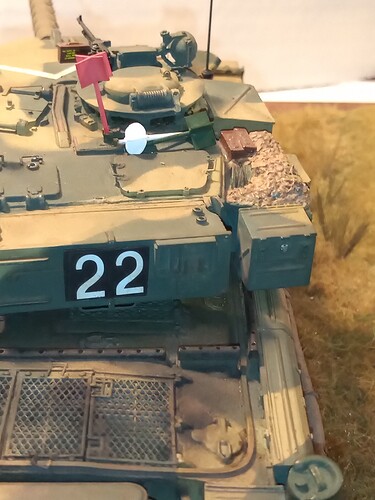 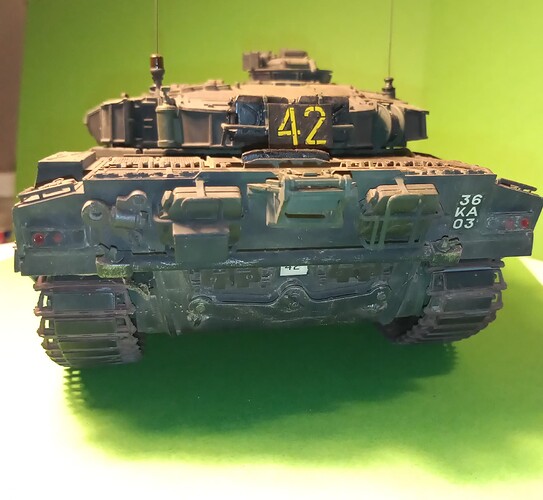 On moving back to UK, we retrained onto CVRT. Spent a few months attached to A Sqn on a Scimitar. 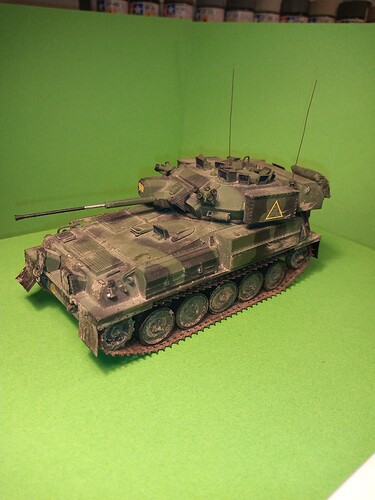 But my most favourite ride has to be my little CVRT Striker, 34b. I was it’s commander from about early 91 to 99. 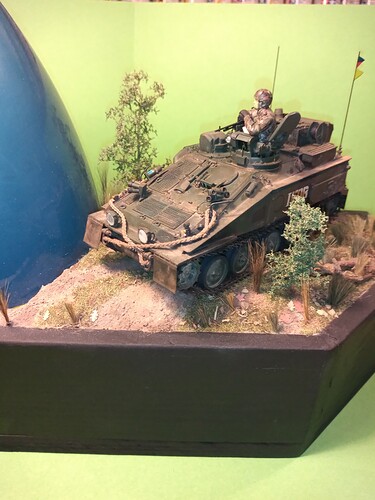 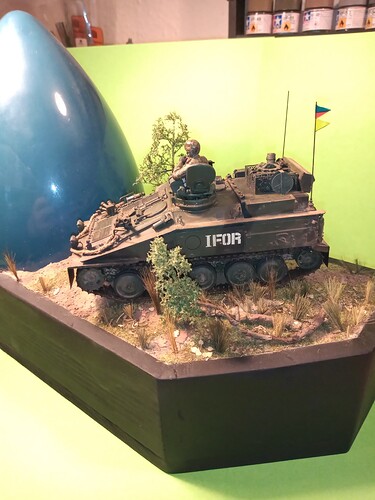 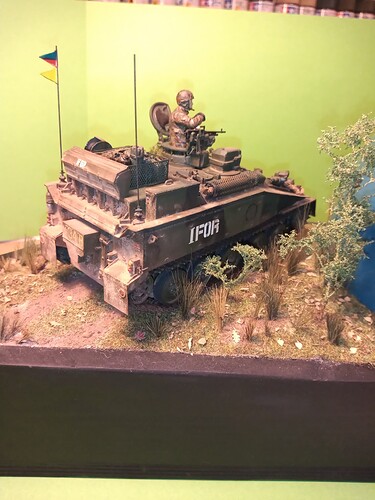 Builds which could also find there way in here if they do kits would be Landover Mk 2, 3 , 110 defenders and Wolf. LR 1 tonne, Bedford MK, TM, Leyland DAF drops, CVRT Sultan, Samaritan and Spartan, 432 Ambulance… To name a few lol… Hope others will jump in and show their rides … Fingers crossed.

Great idea….like the golden memories campaign except this one can go longer. Maybe one day I will build my hog and a representative Humvee, hard to find the Revell M998/1038 kits.

In Desert Storm I was a Tank Commander on an M60A1. Here is the kit I built of that Tank. It has taken a few bumps and needs a little work. 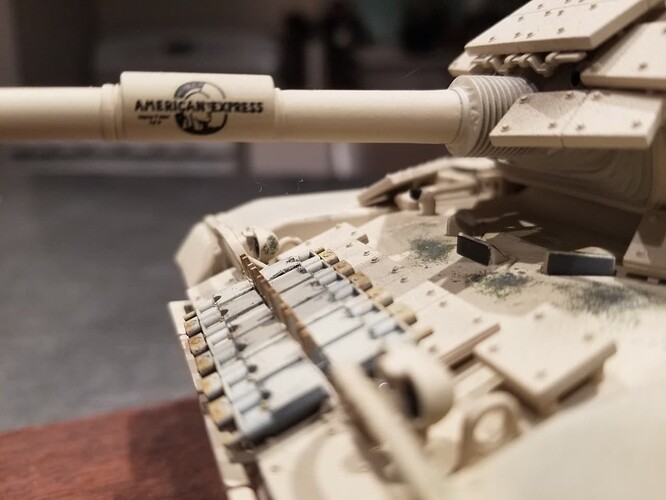 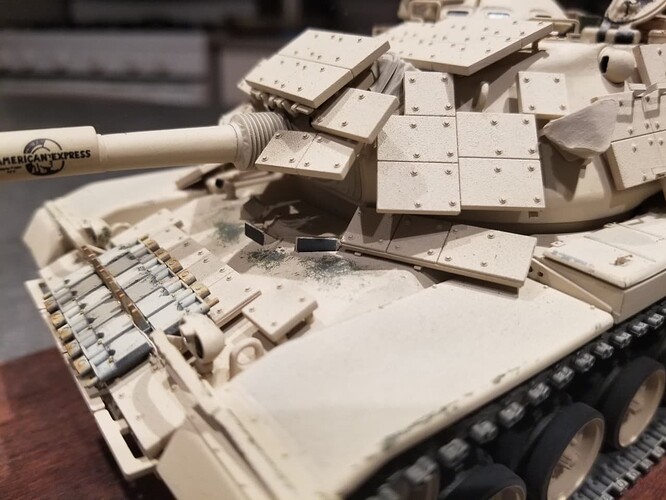 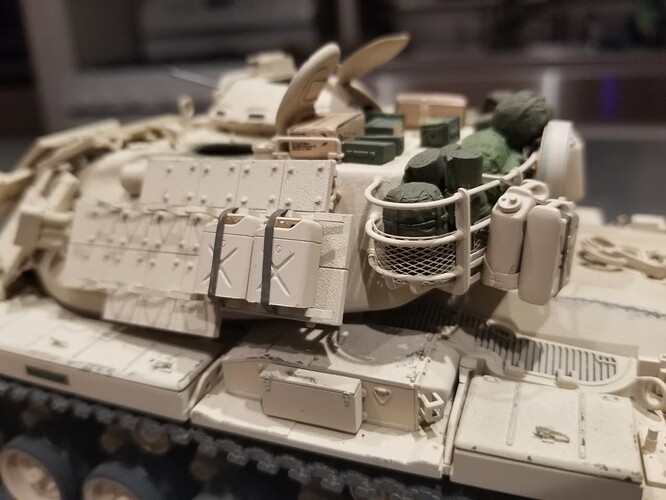 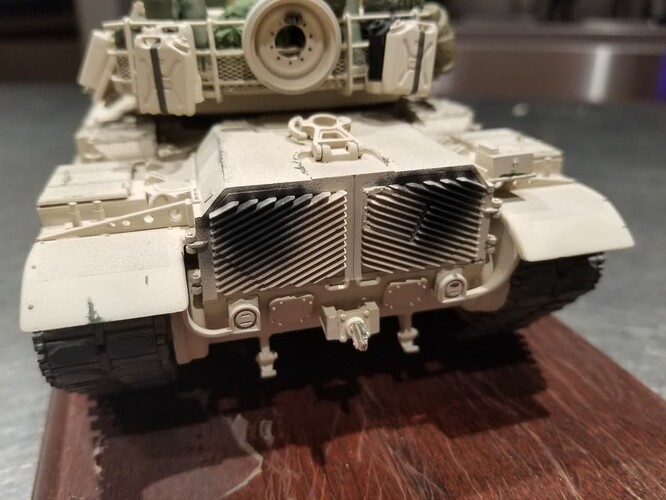 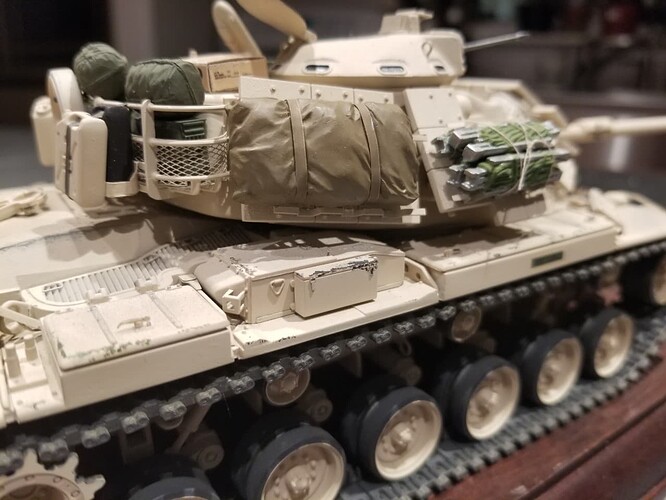 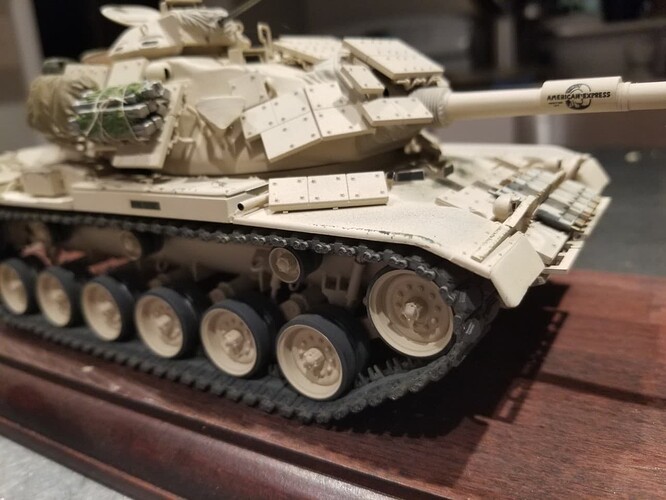 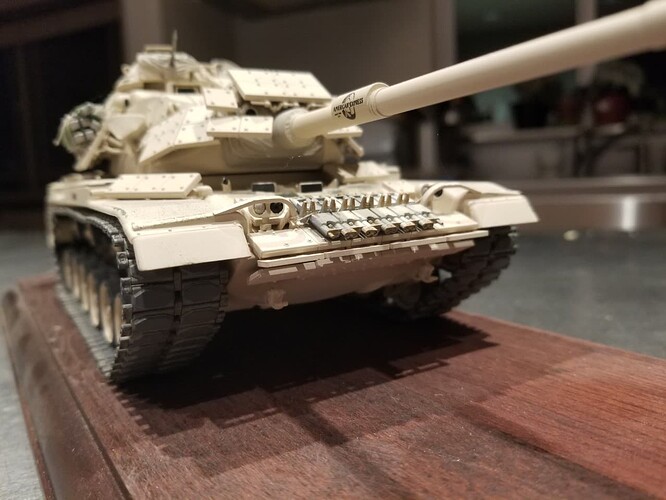 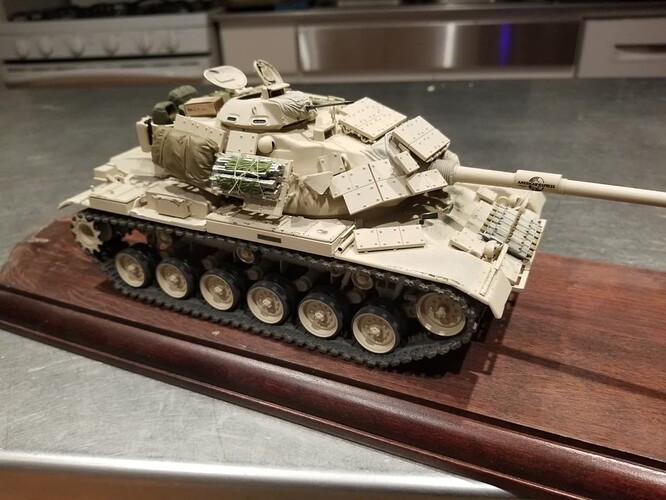 Thanks for Sharing Greg. Exactly what I hoped for. That build looks really nice as well, I like the barrel name as well. It has a nice subtle finish as well. I do like the M60’s and the add on armour gives it a meaner look I think. Great job

Hello there,
you have posted a challenge for me, that i am not able to respond due to a lack of models and resources for them - som of them being a bit pricy!
I served as AT infantry (AT Sagger missle), and later as Military policemen. I used to drive in the following vehicles:
TAM110 truck TAM 110 YUGOSLAV MILITARY TRUCK, Triglav model TB1005 (2017) but 80eur is a bit off my preferred limits
Other than that we used to be driven in Puch jeeps, none of them available in the market as OOB
Revell does short wheeled Mercedes g300, but with soft roof, and i used to be in hardtop one.
Also, the only available long wheeled version is ancient ESCI in 1/24.
I started my conversion of hardtop one at my blog and i posted progress on old armorama
(n)ever finished models: Puch - Serbian Military police
(n)ever finished models: Puch, Serbian Armed Forces

Thats a shame the kits are not easily available Marko, would be great to see them and what you used while in the military. The good thing is, the thread wont close, so if and hopefully when you can get hold of kits, we can see maybe one or 2 posted here … They will always be very welcome

My Ride(s). Got to Germany in 75, after M60A2 training at Knox.But was assigned to an M60 until we received our M60A2’s. A2 is the Tamiya kit with massive detail correction, M60 is recent Dragon kit. 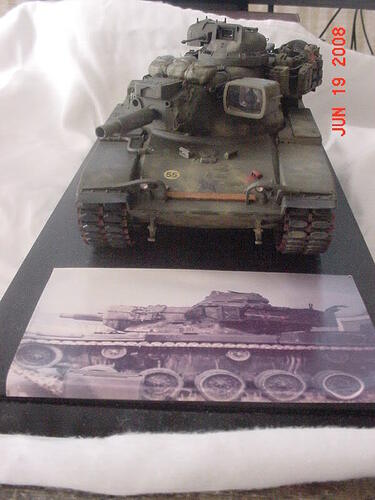 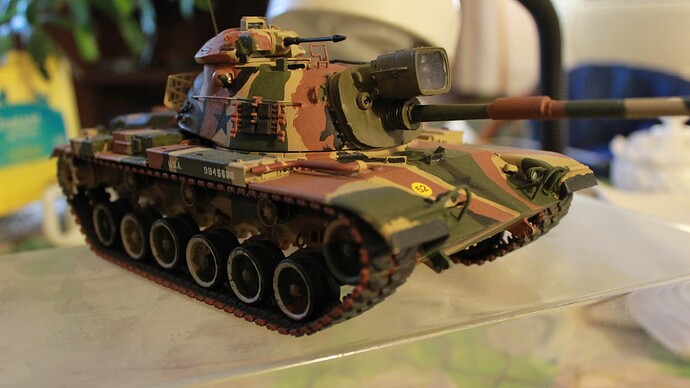 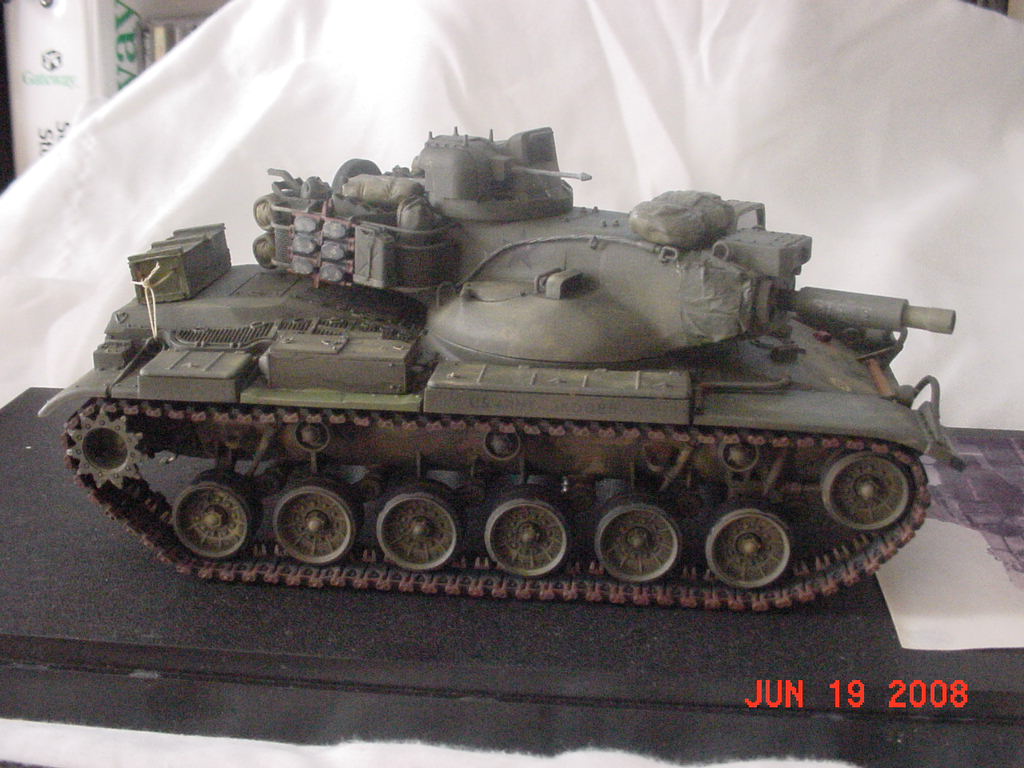 Nice rides. Great you jumped in and have shown us what you were on. The A2s are the missile firers as well arent they ?

Yep, the M60A2 was to have the Shillelagh missile system on a real tank vehicle, not like the Sheridan aluminum can. From 76 to 78 when I left, I shot a total of 13 missiles. 2 were bad.

My ride (back in the day) wasn’t nearly as cool as some of yours. It was an M927 5-ton with the PATRIOT Engagement Control Station on it (Internet photo): 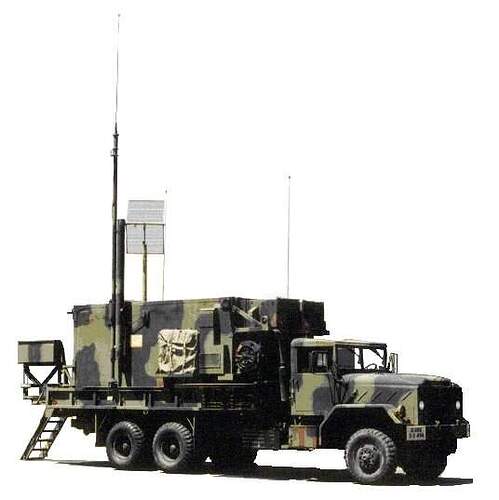 I have no idea how I would make that, and I’m not even sure I’d know where to start. Maybe the Italeri M925 shelter truck?

Besides the R-142N Deymos Radiotruck I was attached to some 26 years ago, I took frequent rides in the “Operations” UAZ 469, traveled once with the Medics UAZ 452(aka the Pill), and took many rides in the loadbeds of various ZIL-130’s and GAZ-53’s. 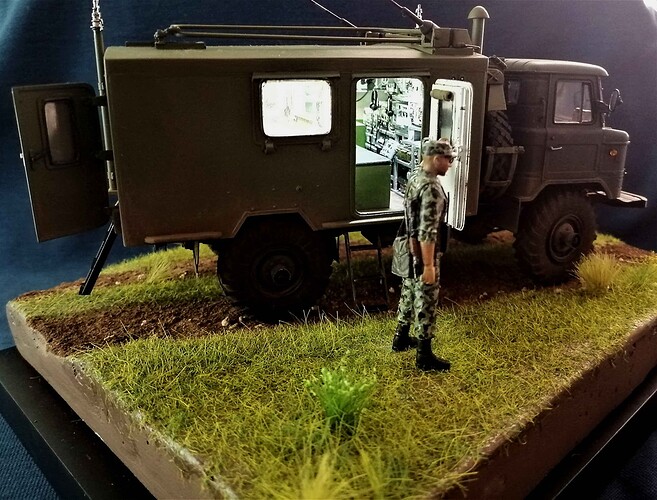 And I have plans to build both the UAZ-469(Trumpeter with some Microdesign AM) and the UAZ-452(from Zvezda’s UAZ 3909 with some AM parts)- the kits are in my stash.

Both the early ZIL-130, that we used, and the GAZ-53 are only available in resin(Balaton Model, the ZIL-130 is a Red Iron Models kit re-issue)and require substantial investment, but still they’re on my wishlist.

Oh, and not exactly a ride, but we took training to overcome “tank fear” with one of the BTR-60PB we had, so Trumpeter’s 60PB is also on my wishlist.

Great that you dropped in Angel, and reminded us about your ride … I still love the fantastic detailing and effort you put into the Deymos, that radio rack was perfection

Here is my ride. Have not built the kit(s) but have several in the stash. I did however build the Monogram kit a few times when I was aboard ship only to toss it over the side to see if it floats… Not. 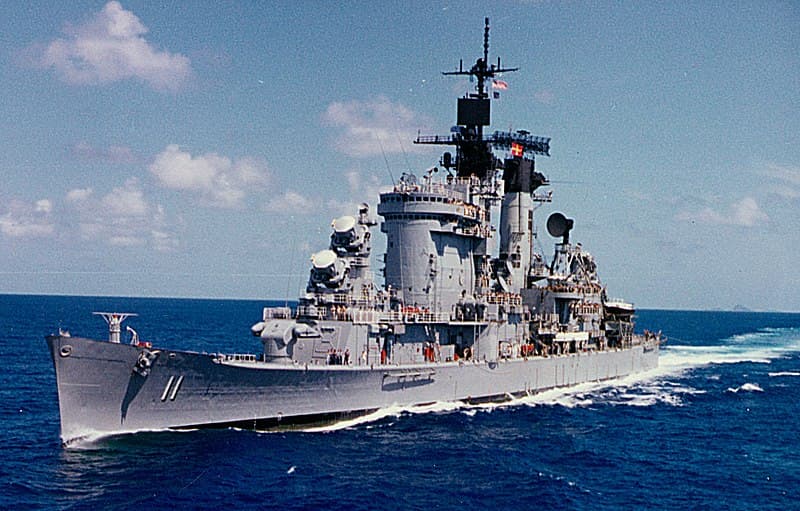 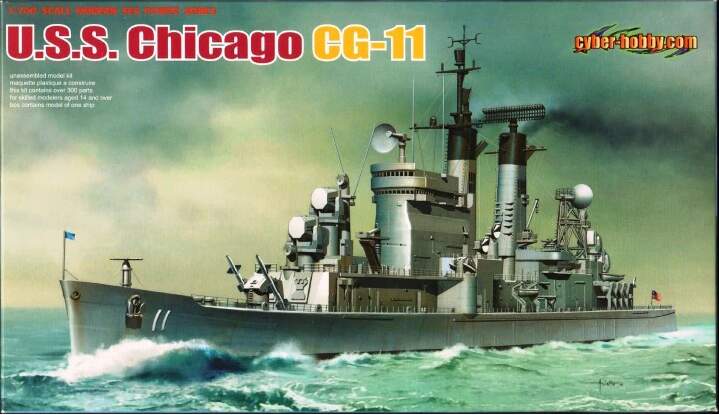 When I was drafted into the West German Bundeswehr, they made me a reconnaissance tanker in Augustdorf (Sennelager for the Brits). So, I spent large parts of 1965/66 on an M41 as gunner and TC. They never told us what M41A? it was, but it had one detail you’d never forget once you’d had to open the loader’s hatch from the inside after a rainfall, as it was countersunk into the roof, which would give you an unwanted shower.
I super detailed the Tamiya kit in 1987, making the mantlet cover and muzzle protector from silk fabric and everything else from bits and pieces. Much later, I exchanged the running gear for AFV Club’s tracks and wheels/suspension sets, which is why the model now has perforated idler wheels whereas I rode around with standard rubber tired road wheel as idlers. 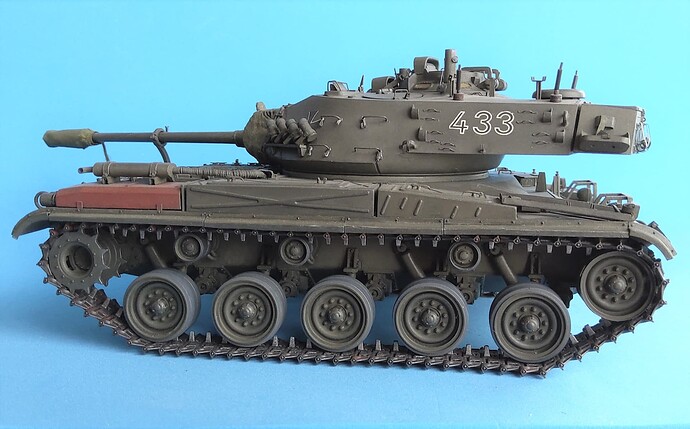 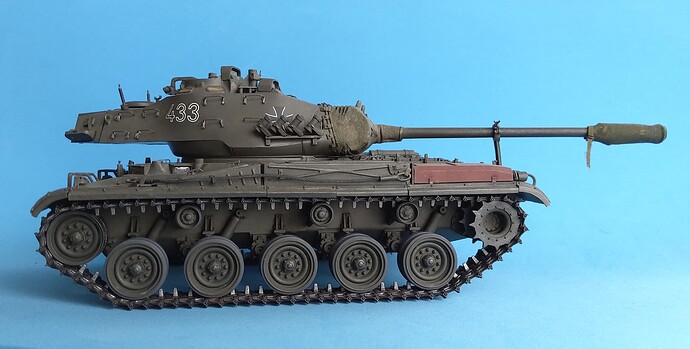 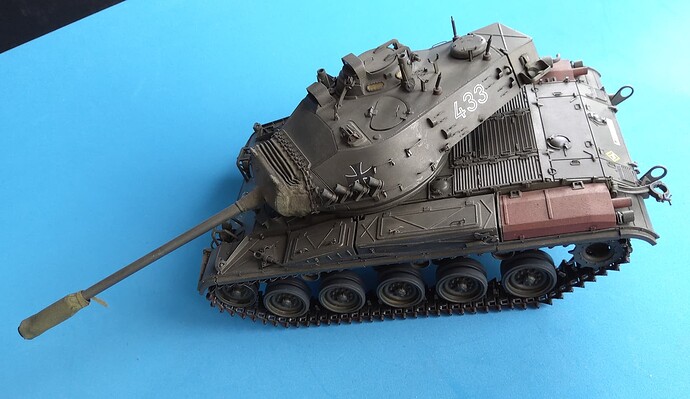 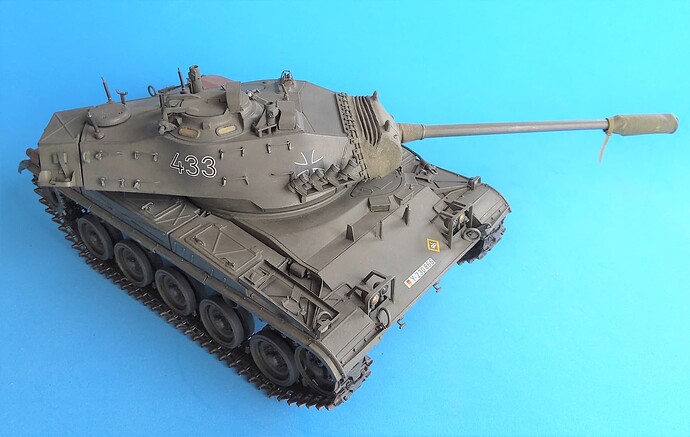 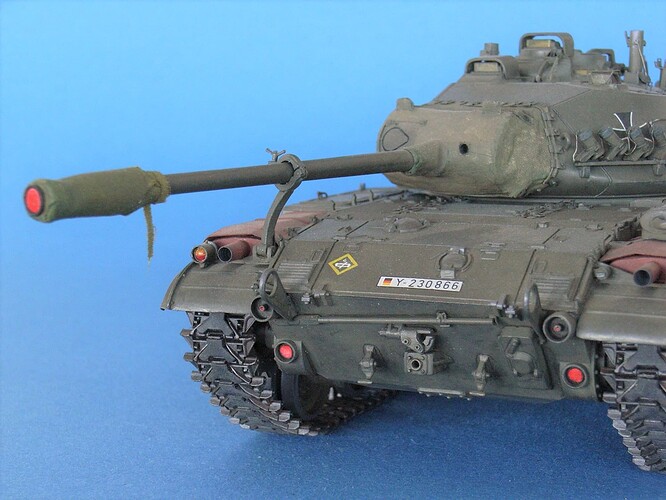 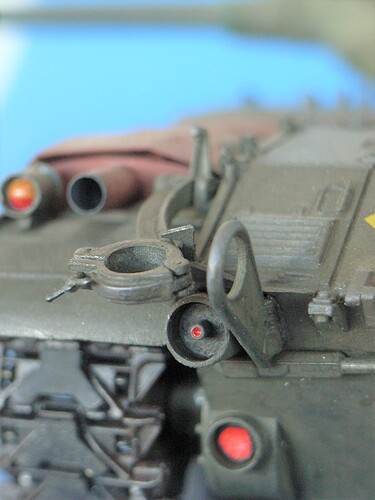 Great build Peter and equally nice history about your time on it. I know Augustdorf (Sennelager) very well, I was there at Athlone Barracks on Chieftain, then Ch1. Schloß Neuhaus down the road was a lovely place, and before that I was in Detmold which was a beautiful town. Which Barracks were you at ? Rommel Kaserne by Stapel training area ?

Yes, Rommel it was, and we lived in former officers’ quarters, four guys in one room with an own sink and parquet floor that we had to wax and polish once a week…

haha … those were the days. We had so much fun polishing those barrack room and corridor parquet floors LOL…