Well, I don’t know how epic it will be actually.

I built a 1/72 Hasegawa phantom for the phantom group build. It was a bit of a let down. I was so excited I couldn’t wait to start, then I made some mistakes, I realized there were some kit mistakes (I wan’t going to fix), and some kit fit issues that made it less than enjoyable. But, it looked good when it was done (if you don’t look too close). 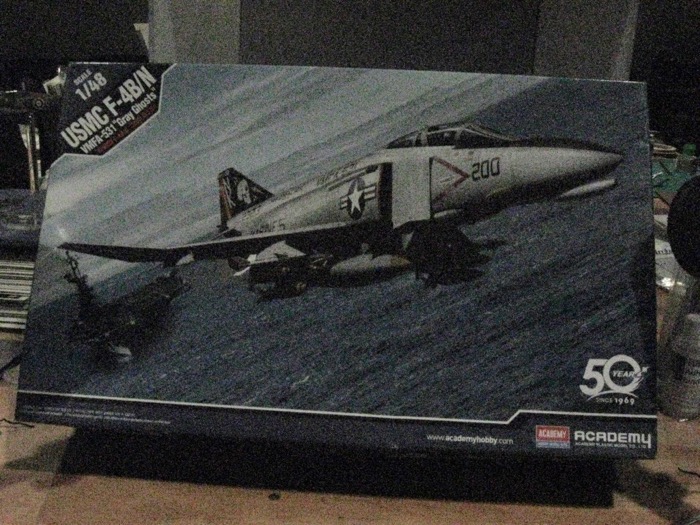 Lousy pics, here, I know, still experimenting with the camera. It looked good on the camera, I swear.

I ordered some AOA decals separately for some marine mud movers. 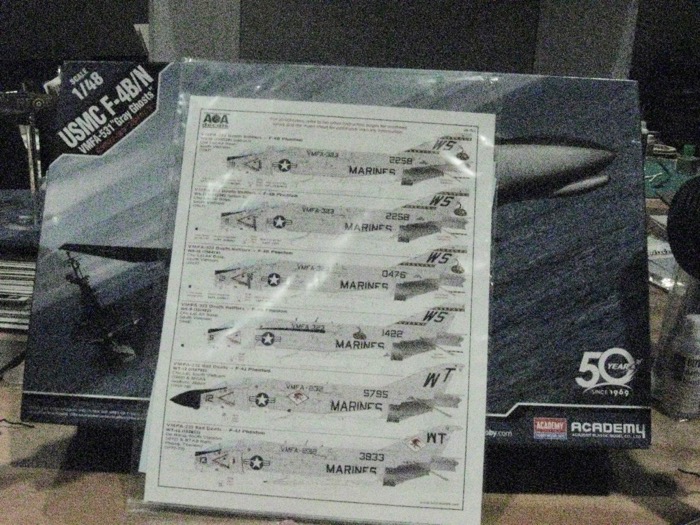 My inspiration is this cool video about phantoms in Vietnam. There isn’t that much footage of them, but I’m taking my inspiration from it and intend to do a Death Rattler:

I’m mostly doing out of the box, but do intend to get some after market bombs to load out like the planes in the video.

Honestly I don’t know anything about phantoms, but they are very cool looking, so I may be asking a lot of questions here as I go.

And I already have my first question. In the back seat there is a plate that looks like it is intended to have a control stick it but none, just a hole. It’s my understanding that in f-4bs the guy in back could not fly the plane. So, I’m guessing that hole should be filled? And there is a pair of pedals on the floor in back that look like rudder pedals. Were they there?

It doesn’t matter that much as I intend to have the crew seated and that won’t be visible, but for future reference (am I already thinking of doing another one???)

I’ve built the seats and dry-fitted them to the cockpit to allow me to put the arms on the pilot and rio and not be embarrassed when I go to permanently attach them. Have primed the tub and all the cockpit panels, and primed and mostly painted the crew. I need to figure out where the air hose attaches and bend it accordingly, then I’ll finish painting it, and tidying up around the helmet. The some filters and applying decals to the helmets and they will be done. 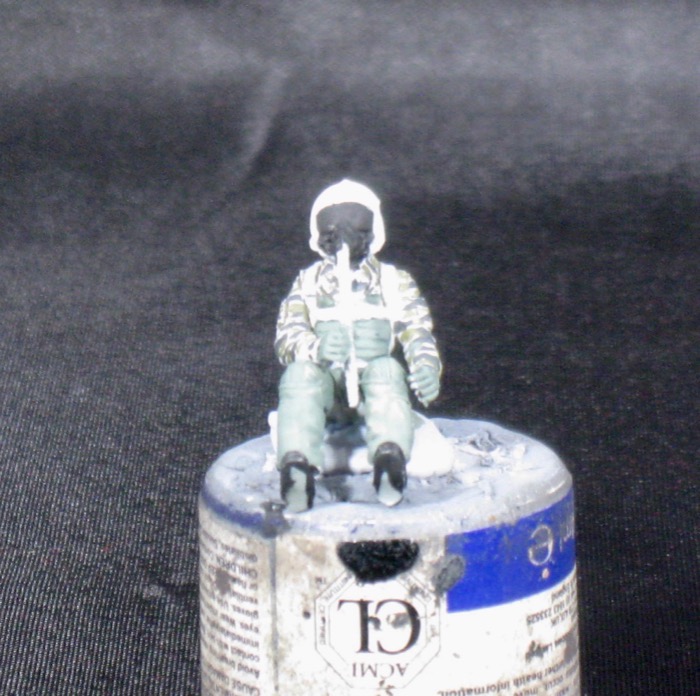 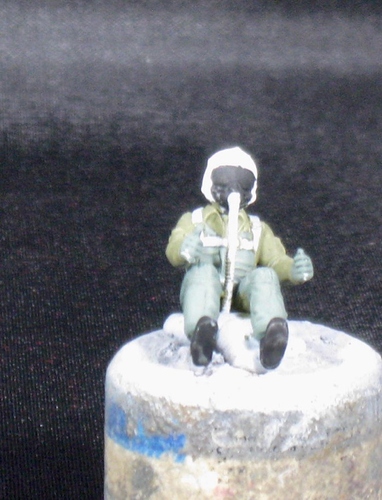 Looking good Phil. I will be checking in with this one as you progress. Like I said last time, I totally agree about the 1/72 scale, I feel exactly like that with the Phantom I’m building. I’m also going up to 1/48 for the Mud movers, a Tornado so hopefully I will enjoy that build more.
You doing this one wheels or down ?

Wheels up! Though I’m not sure how I’m going to display it. With 1/72 planes smaller than a phantom I stick a magnet underneath and put it on a clear stick with a magnet. That’s not going to get it done with this beast!

Ha, that’s the problem with these bigger birds… the end result will look impressive though.

Which jet are you thinking about doing from the AOA sheet?

Not sure on the specific plane. I’d like to do one of the planes in that video linked at the beginning. I have all the unit specific markings from that sheet. I think the stencils in the AOA sheet may be late for those planes. One of them in the video has the same serial number (is that what you call it), but the plane number is different. So I haven’t sorted that all out.

In the end I may just do one exactly as specified in the AOA sheet. It will be a death rattler plane though - I’m about to stick the helmet decals on my flight crew helmets.

From my research plane numbers were sometimes changed. I have the same sheet, and the Furball USMC sheet.

Hypersonic Models have Martin Baker Mk5 seats, and they are super nice. 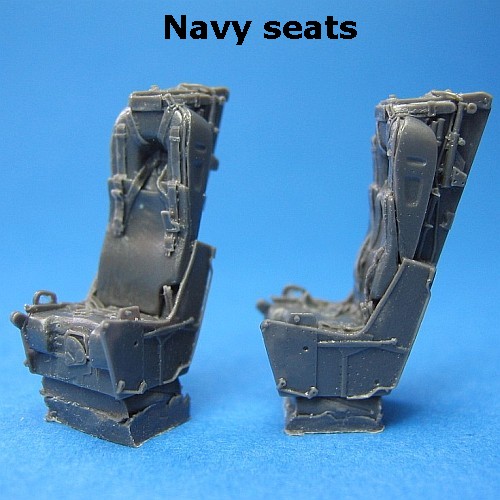 See if you can find this book. It’s a goldmine of info. 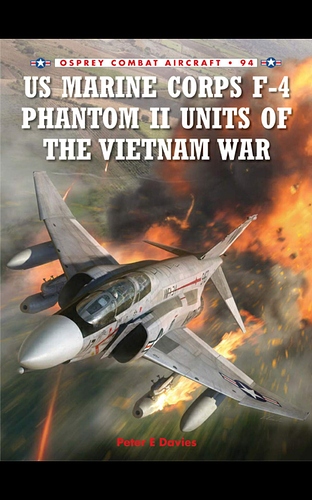 I have read it and it is great! Do you have the furball stencil sheet? It says on the website they were the factory applied stencills which is i think is different than the AOA sheet?

I do have the Furball stencils. They are more refined and the AOA stencils that yellow are more of a light brown on the Furball set. With a few other differences.

Yep. Fill the hole. I’m not sure about the pedals.

Has anyone used the Trumpeter in flight display stand? I see Academy makes one too, so thoughts on either of those would be helpful.

So I’ve been noodling on the exhaust. I put the exhaust together already and wish I hadn’t. I’m not sure if this really makes any sense, but I’m wondering if there is a way to make the engine glow since I’m doing the model wheels up and in flight. I don’t want to be on full afterburner but watching videos of the phantom it’s usually glowing deep inside the engine. If I hadn’t glued it all together, I could paint the deep parts of the back plate yellow or orange, but I’ve missed that opportunity. Thoughts anyone?

And the thing on the wing, what is it? On the top of each wing there is a small bar used only in option 1 of the planes. Option 1 is late ('73 or '74? compared to the '67 versions in the other two options). I imagine it is some kind of reinforcement to strengthen the wing or something? If you have the kit, it’s part G27, one for the top of each wing.

Those are for the landing gear attachment points. From the references I could find, they are on the F-4B. I can’t get to my reference books (They are in storage). When I build my Marine F-4B, I will install th em. 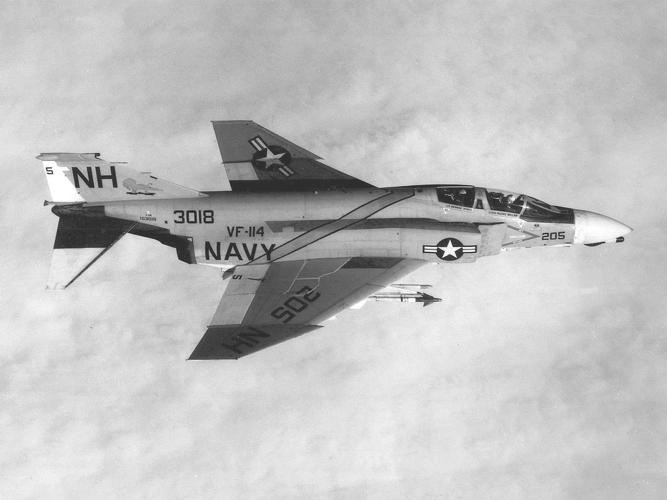 Interesting. They only specify it for the late version which they label an “n”. I can believe they are landing gear bits as now I look there are a couple of parts on the underside of the wing also (K17) although they are behind the landing gear parallel with the air brake.

I see the lower wing bits as part of the an/alq-126 antenna fairings. I need a good one place reference…

I’m going off of memory. As I recall, Navy and Marine F-4s had the wing “bumps” for the sturdier landing gear. I know on the old Hasegawa F-4C and D, you had to scrape off the landing gear “bumps” (for lack of a better word.) If I come across any more info, I’ll drop it here.