No, I’m pretty sure it was the later iterations - “B”; I’ve noted over the intervening decades - since its introduction - that many commentators (not your good self Carlos!) have derided the T-64 for being less than capable, with an over complicated this, difficult that, problematic engine, automatic loader etc etc. I think there is a danger of conflating the issue and ignoring the fact that soldiers will play the cards they are dealt with and whatever the failings of a particular piece of kit, will endeavour to make it work (pace Chieftain perhaps?).

I’m sure the crews within GSFG may well have struggled but they would have tried to get the best out of it and I’m sure it would have been just as deadly as NATO feared.

I’m clearly not qualified to any extent to comment on the M60A2 (and not really on the T-64!) but isn’t there at least one modeller on here who has crewed them? I seem to recall that whilst a bit of a 'mare, they got the best from them - or is that (my) wishful thinking and/or duff memory?

Boots.
I was a gunner on an A2, when we were issued them new, in Jan '76. If a crew pulled maintenance as needed, they ran fine. The issues with the missile guidance system were occasional. Getting some replacement parts was more of a concern.

Thanks Carl; sort of proves my point re my comments above (viz soldiers getting the best from etc etc). Always good to hear input from first hand experience.

I’m pretty sure that if I was a GSFG crewman in T-62, T-64, T-72 or whatever, I would not welcome 152mm worth of Shillelagh approaching my glacis or turret(!)

You can see the Six Day War and Yom Kippur wars in Israel, where Israeli M48 (Magachs), alongside British Centurions (Sho’ts) and the even older M50 and M51 Shermans faced off against both old tanks, like Syrian and Egyptian (former German) Panzer IVs and Stug IIIs and IVs and Soviet era T-34s, as well as newer T-55s and T-62s; the M60A1s faces Egyptian T-62s and T-64s when the Egyptians breached the Suez Canal during Yom Kippur.

A great picture that i like is the stand-off at Checkpoint Charlie between American M48A3 tanks and Soviet T-55 tanks in 1961. The American Patton tanks of the 40th Armor regiment; Berlin Brigade, and I think the M38 Jeep is from the 287th Military Police Company. 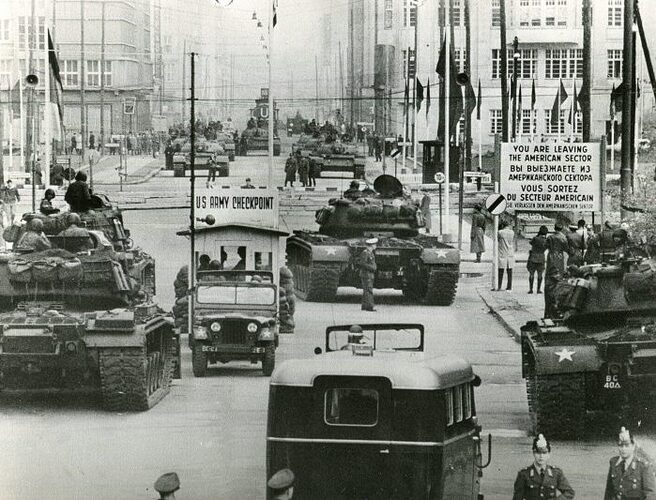 A very evocative picture but I must disagree with your mention of the Egyptians possessing T-64s; I’m pretty certain they didn’t.

The stand-off at Checkpoint Charlie was also covered in colour (found on the www for discussion purposes): 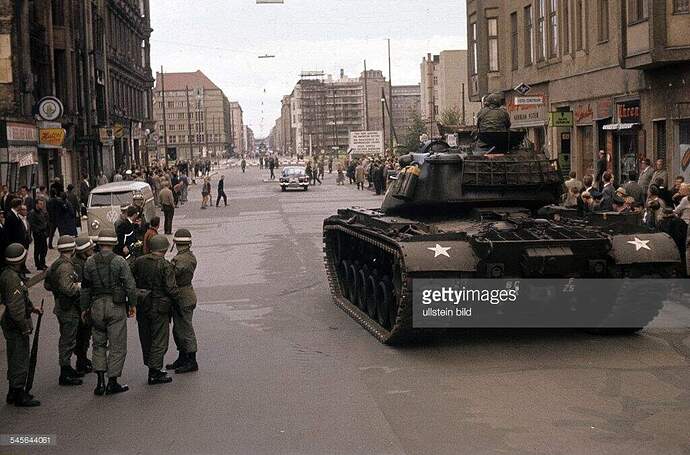 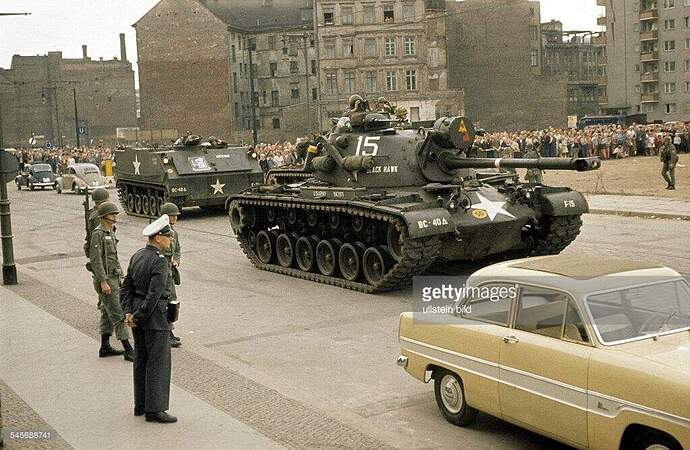 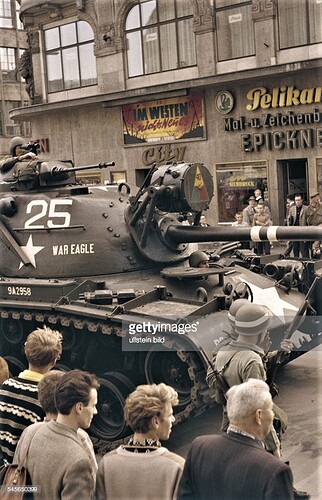 I must disagree with your mention of the Egyptians possessing T-64s; I’m pretty certain they didn’t.

I stand corrected then… After doing some further research, I agree. The T-64 was almost exclusively used by the Soviets during that time. Thanks for the correction.

'Hope I didn’t sound too pompous!

Mind you, it would make a great “What-If” model.

Mind you, it would make a great “What-If” model

Always wondered what it’d look like if the Soviets came down the Fulda Gap in full force; 20 divisions deep… How would the US and allied forces stationed in West Germany react?

If you’ve ever played the “Twilight 2000” RPG game; that idea is discussed broadly in the game, with the Soviet Union and the US slugging it out on the European battlefield.

There’s been a fair bit of discussion on this within the thread “NATO v WP, 1970s”; sorry but I don’t know how to link it.

The T-64 was almost exclusively used by the Soviets during that time.

The T-64 was never exported by the Soviets. It was their top of the line tank until the T-80 was developed from the T-64. The T-72 was the export equivalent, with a simplified fire control, engine, and other downgrades. The Ukrainians ended up with so many after the dissolution of the USSR because the factory that produced them was in Kharkiv. T-72s were produced at Ural factory, and T-80s produced at Leningrad/St Petersburg.

Still one of my favourite tanks - probably for all the wrong reasons - but it does resonate with my time.

Now I find I can’t get an image of an Egyptian one out of my “What-If” head(!) Overall sand? Camouflage patches, markings? Aaaagh!

Thanks John - what would I do without you?!

The T-64 was never exported by the Soviets. It was their top of the line tank until the T-80 was developed from the T-64.

Five T-64s were delivered to UNITA forces at some point during the Angolan Civil War.[44] The origin of these tanks is not clear, but some number of them were also captured by MPLA forces.[45] According to video evidence, at least one was destroyed in combat.[46]

Aside from that, yes; the T-64 was a strictly Soviet used tank. Yes, the main Assembly Plant for the T-64 is in Kharkiv in what is now Ukraine, and it’s the main battle tank for the Ukrainina Army, aside from all the T-72s being diverted from former Com-Bloc nations, along with the newer tanks being captured and repurposed from Russian forces.