Question to IPMS (and similar) judging

Is 3D designs and printings considered scratch-building in competitions? A person with little or no model building skills is able to produce a better than an OOB kit. Seems to be a very unfair advantage over the modeler who studies plans, measures, and cuts sheet plastic, and makes them into something the hard way.

Great question. Perhaps it will be a separate category or there will be different criteria for judging. Wonder if it’s been discussed at all?

I think most have miscellaneous category and it would be added there.

For the Richmond show coming up, I would say category 71. If enough 3D print entries then maybe a spilt.

Every show can be different so ask the Contest Head Judge.

Don’t forget the issue of deciding if the part has been made by the modeler,
designed by someone and printed by the modeler, designed by the modeler
and sent to a printing service, designed by someone else and bought from a
printing service.
Many years ago I read an article by some ship modeler who had competed with
a totally scratchbuilt sailing boat. He had used photoetching, a stamping tool and
some DIY-chroming set to produce a domed ventilator.
He had to make the ventilator holes slightly oval on the flat metal so that they
would become circular when they were stretched by the stamping tool.
Really skilled work, many failed attempts before he got it right.
He got disqualified becuase nobody believed that he could have made it himself.
Needless to say but he stopped competing … 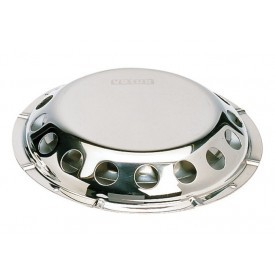 A person with little or no model building skills is able to produce a better than an OOB kit.

In my opinion this is a not fair statement… 3D design requires also skills and knowledge, and you have to do the same research. Moreover, printing needs careful split parts so each one is printed in its optimal orientation.

If you can consider sculpting, creating photoetch or using styrene is all scratchbuilding, despite they are all completely different processes, I see no reason why 3D should not be considered too.