Recommend me a kit

I got back into modeling after a couple year hiatus and have since built 3 tanks. It’s been a long time since I’ve built a plane kit but think I want to get back into it. I’m looking for suggestions of a good kit to get back into it. My main interest is WW2 but I am also interested in modern stuff too. To help narrow it down my top 6 interest would be:

The 1/48 Tamiya Lancaster is awesome, but a bit pricy…
(On the plus side you can build it as RCAF)

Kinetic has some great CF-18s

I only build 1/32, so my suggestions are based on that.

Don’t know if that helps any, but there you go.

Thanks for all the great suggestions. I’ll look into some of these. Leaning towards a Corsair or F-16. The F-16 is my favourite modern fighter, I’m not sure why I like it so much but it just looks mean.

Idk, it just one of those things. Could be the production runs are smaller. Most 1/32 ac are well over $100 and seems new 1/48 ac are moving that way too.

Fair enough was just curious if I was missing something that would make 1/32 worth it. Will probably star with an older 1/48 scale, so I don’t have to sink $100 into a kit I might butcher

I get that. Here is good cheap option link.

Thanks for the link, think I might order it. However being in Canada I think I’ll add some things to make the shipping worth it. I’m thinking of adding metal barrels for my Panzer II build, and was also thinking of adding an F-16.

I was wondering how small the 1/72 scale F-16 are? I don’t like tiny kits but I know aircraft are larger than armor so maybe a 1/72 won’t be too bad 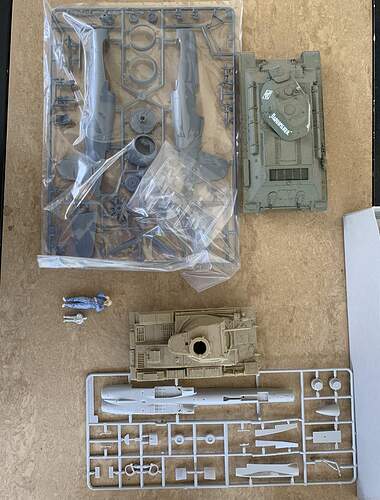 8” sounds like the box size and not the completed model.

That would certainly make more sense.

Alright sorry for my ignorance on the subject, like I said I’m more used to armor but like aircraft and wanted a change of pace. I’ve settled in a 1/48 F-16 (the Tamiya F-16 CJ) and a F4U Corsair. I am ordering these from Hobby Easy. I can get the F-16, Corsair, and PE for the F-16 for cheaper than just the F-16 locally.

I am stuck on deciding between the Hobby Boss F4U-1 early and late variants. What is the main difference between these two variants?

One difference is the Canopy.
The early is more of a challenge to mask while the Late is much easier.

I though the bubble was on the F4U-4. I prefer the birdcage one, I know it’ll be harder to work with but I like the look. I was curious in difference between the F4U-1 early and F4U-1 late.

Ooh your right the bubble is just on the F4U-4.