Removing very fine (and fragile) PE from its sprue

Continuing to work through the photo-etch on my Bronco Valentine. There are some extremely fine pieces of photo-etch - so small they are almost invisible. I’m not sure I can work with them even but I intend to try. The first task will be getting them off the sprue. I normally cut photo-etch with a scalpel against a tile and it’s fine, but fragile parts will bend. I’m wondering whether there is a tool for this that would minimize that?

This PE is fairly fragile even on larger parts. I broke a couple just bending them. (And they didn’t break where I was bending them but under the bending tool further up the piece)

I don’t know whether this wil help but you could cut the “eh” sprue in a few places first. When cutting a tiny (and therefore weak) piece that is connected to a solid sprue then it will be the piece that will bend to make way for your cutting tool. Braking up the sprue first avoids such tension.

I use that trick often for tiny plastic parts.

Your problem might be the piece of tile which could have small imperfections in the surface so that it’s not perfectly smooth and flat (despite being very hard). Another problem might be your cutting blade. If it’s really dull, the rounded edge will tend to bend the PE more before it cuts.

Try using a piece of glass to cut on. I use a piece taken from a small picture frame. These little picture frames are often on sale for less than a dollar each, and I’ll pick up three or four when I see them to keep on hand. When I happen to break one on my work bench (usually because I’ve got a bit a trash under it and it cracks when I put pressure on it to cut), I’ll just toss it out and replace it with one from my supply of spares.

This is also a superior cutting surface for trimming and cutting painter’s tape for masking small jobs, etc.

Also consider putting a piece of double-sided tape down on your cutting tile if you have trouble with small PE parts flying off into space when you cut them from the fret… Lay the PE fret with the part in question on the tape so that the small part is stuck to it.

Cut as normal (perhaps also pressing one finger of your non-cutting hand on the part, too). The tape shouldn’t be so thick that you get too much distortion at the attachment paint during the cut. Keep the point of the cut away from the very edge of the PE part and deal with the bur later.

This “tape trick” replicates the same way that “connectionless” PE parts are marketed with all the parts stuck to a vinyl backing with no attachment points to any fret.

For cleaning up the small burs that remain PE parts after cutting from the fret, I generally hold the part in a pair of medium sized, pointed tweezers with just the bur and the tiniest bit of the part proper exposed. I then use a Flexi File to sand-file the bur away.

Finally, I generally leave a “generous” bit of the PE attachment on the part to keep the cut and any distortion away from the edge of the part proper. Holding and supporting the part close to the bur also prevents the sanding-filing action from distorting it and results in very smooth and clean edges.

A glass cutting surface as mentioned above definitely rocks when working with PE. My desk top is covered with sheet of tempered glass.

Or you can buy the PE Cut Off Set by The Small Shop.
I have the Standard one for 4 years now and it still has to let me down while cutting the tiniest of PE bastards: 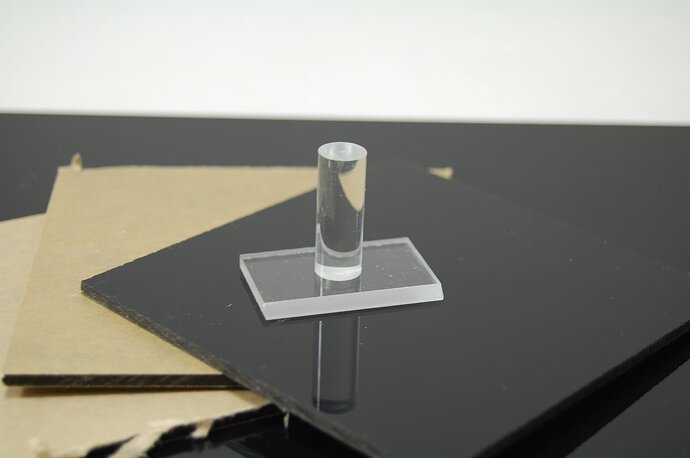 Features:   100% Made in the USA by The Small Shop® Three 4" x 4" black Plexiglass bases (kit comes with protective paper on both sides - remove one side and leave paper on the other side until read to use) Clear Press with Knob Makes removing...

I cut on a stainless steel block I found at Hobby Lobby for some other craft project that use a hammer and stamps-jewlery making or something similar. This gives me a nice solid and mar free surface to cut against that also doesnt get scarred up easily. I try to cut smaller parts that might launch into the stratosphere inside a clear baggie and that has worked for me. I remove PE using an X-acto blade thats similar to a #11 but rounded off instead of the steep angle of a #11, allows me to roll and rock the blade along the fret attachment, think its the #10 or 22, not at home currently but that should narrow it down. Hope that helps in some way for you.

Thanks everyone. I use the tape trick to keep things from flying. I got a Swann Morton surgical scalpel to use for this - incredibly sharp blade but it wears quickly. I’ve ordered the small shop tool Angel suggested. And I have a diamond file that my work had (and I got to dispose of when it went out of business). I will report back.

Thank you for the excellent information on the Small Shop Cut Off Set. A++

I ordered one and tested it tonight. The trapper helps with precision cuts and keeping small parts pinned. The black acrylic sheet is a good staging area as small PE parts are easy to see. As for the cutting surface, I will stick to my glass desk top. Both cuts made on the acrylic sheet left slight marks one can feel. I maybe heavy on the pressure etc. Definitely worth while purchase. Just the clear trapper being well worth the price.

Can never have enough tools, I recently found a knife that I had never seen before. Had to pick one up, awesome tool and doesn’t roll. 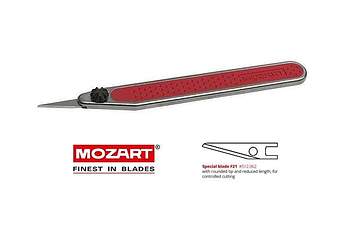 Also the tool Angel mentioned, looks like something worth getting.

Both cuts made on the acrylic sheet left slight marks one can feel. I maybe heavy on the pressure etc

No, you’re not!
The acrylic sheet is softer than the blade so blunting is prevented.
I have the same marks on my sheet but their presence is not an obstacle in any way.
With moderate PE cutting-meaning not every kit I built had PE to cut and attach- the first sheet surface I used lasted for 3 years.
Now it’s flipped and will serve me at least till 2023.

Angel, Thank you for pointing out that out. I’ve been going through a lot of #15 blades over the last two weeks working on PE. I will give the acrylic sheets another chance.

I like the small shop tool, been awhile since I last used because I have not done much pe work, ship later this year will fix that.

The knife looks great but how is the ergonomics of using it and what is “special blade” replacement cost?

I have an old Ausfwerks ‘The Block’, it looks like the Ausfwerks website is long gone but this is basically just cutting board material, I’ve since found similar items on ebay when it comes time to replace this. 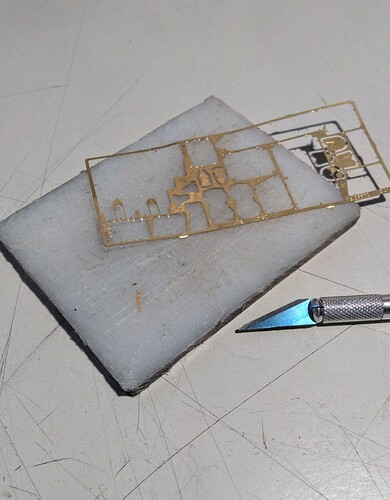 The knife can be held like you hold a pencil and the sides have embedded rubber grips.
It comes with a pack of 10 spare blades and extra blade packs are @$5.00 each.

Best advice so far this year. I picked this up and used it for the first time tonight. It was kind of perfect. Thanks, Angel!

Glad you liked it, Phil!

Information not shared is lost, so spread the word,

Acrylic sheet of various thicknesses is a fairly basic commodity and should be possible to source locally. The difference between black acrylic and clear plexiglass with a black paper underneath (or even painted black) is minimal.

Thank you for the tip.

I’ve continued to use the set and it works very well.