Hi folks, I posted this on the old site, but it’s connected to my previous post on the Salvage boat as I used a few parts from the old UDT kit, engine, propeller and side runners. The boat is based on a resign hull I had made and the rest was scratched built from plastic card and a few old jeep parts. 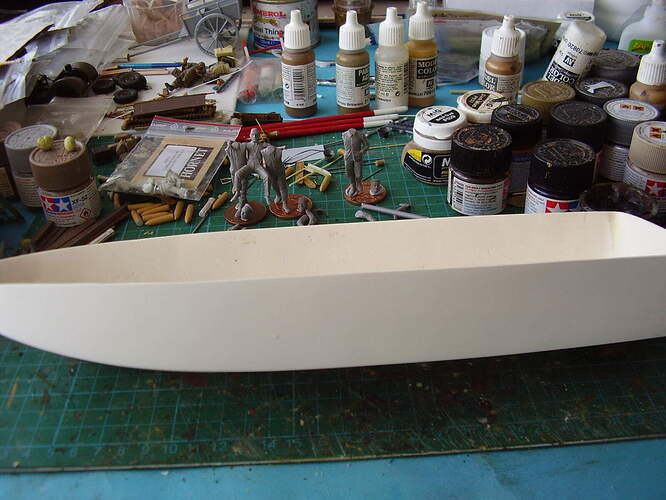 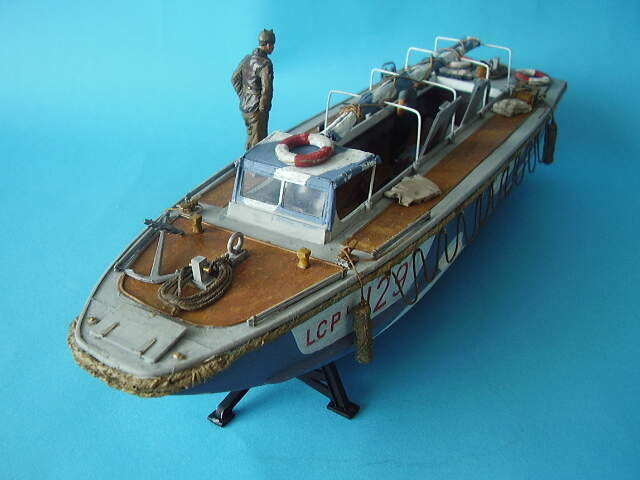 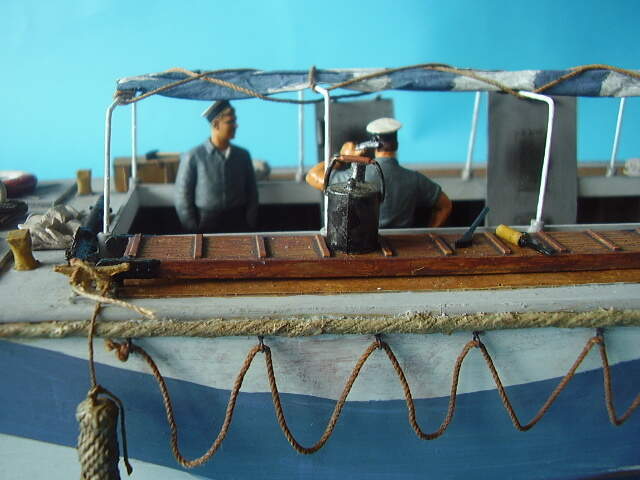 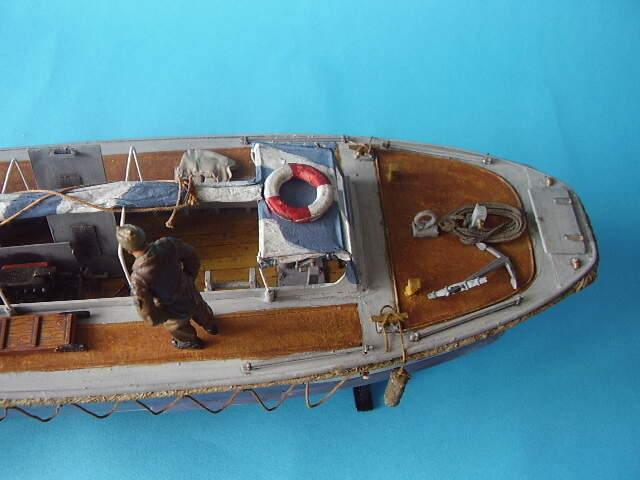 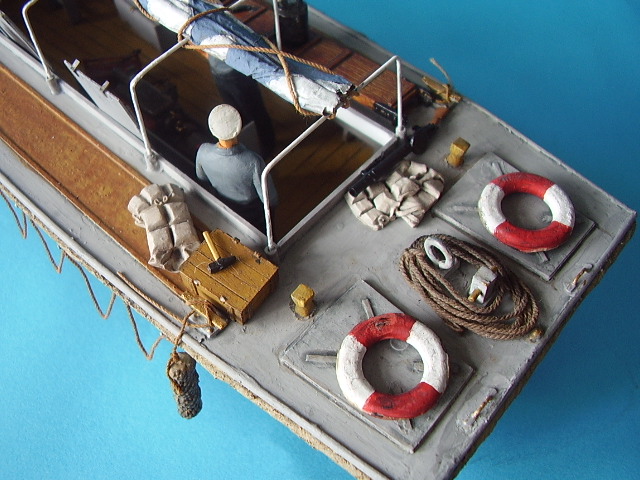 Well, I’m not a ship builder, but I think it looks fandamtastic ( nautical term ). When I consider this is not a kit, it is more amazing. I had one of the UDT kits as an 8 or 10 year old. Many years of tub, pool and pond useage until it was too broken to use any more. That first experience with rigging the raft onto the side of the boat was enough to make me swear off of anything requiring rigging. Except that now I am hanging helmets, canteens, and grenades off of turrets. I am trying to fold tarps and awnings onto the sides of vehicles and I have to ask my wife to sew the covers for cargo truck bays. If I had only learned how to do all of this on ships, detailing my vehicles would be so much easier. Consider telling us how you did the ropes and rolled awnings sometime.
DAKjunkie

Hi, Thanks for looking in. The ropes come from Caldercraft (rigging thread) which you can get n various sizes. Modelling Timbers also do a range of Egyptian Cotton thread which is useful. Grandt Line do a large range of plastic rivets and bolts and a useful set of eye hooks. For tarps I just use large tissue cut to size and treated with PVA. Once ropes are cut coiled to size they get a soaking in PVA too. These are a couple of Bedford Trucks I made some years ago, tarps are all paper tissue as is the awning on the boat. Hope that helps 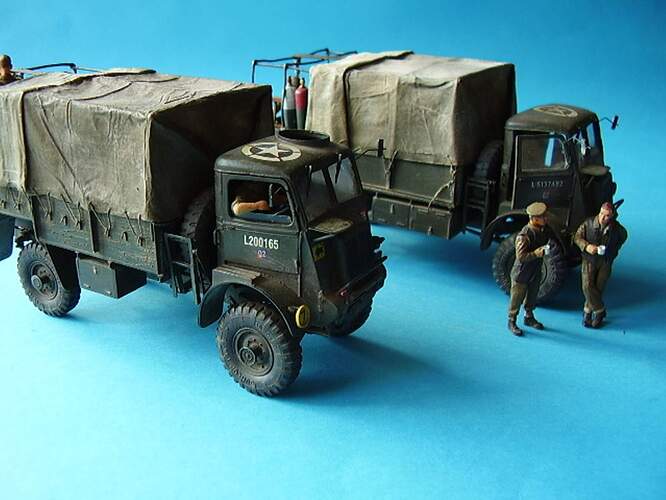 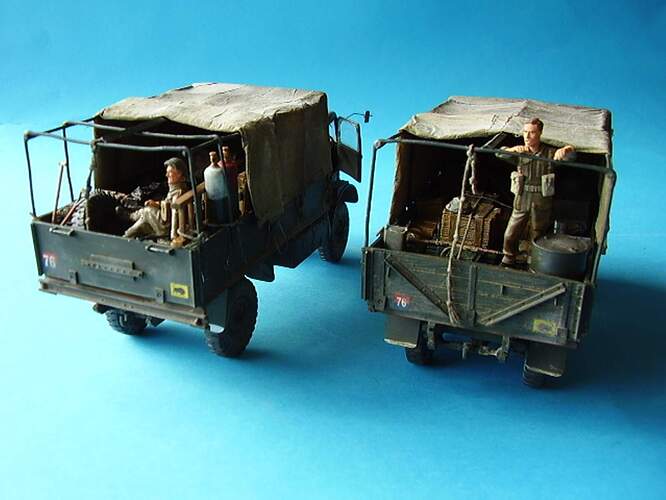 Often I just improvise with what’s spare, the cabin is mainly from left over parts from the Tamiya jeep modeled to suit. 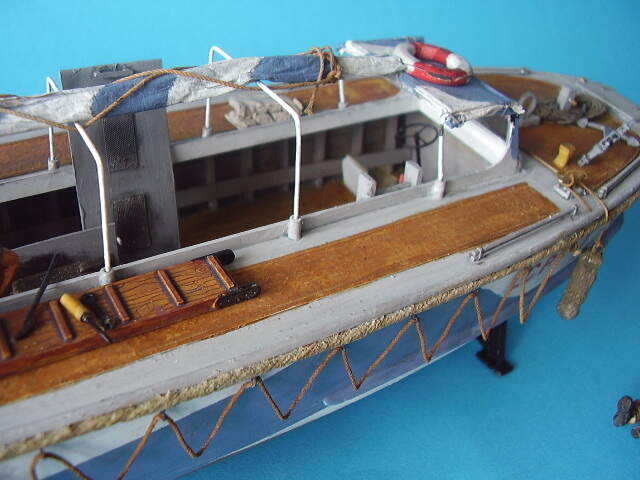 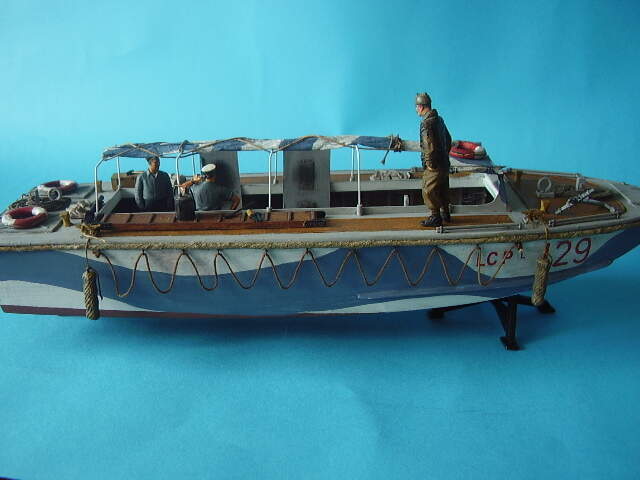 I don’t mean to be so dumb. What is PVA? I have used tissue for tarps, but it is fiddley and tears so I’ve only used it in bundles, ie partially rolled up. Thanks for the info on sources and techniques.

PVA is a white glue. If you dillute it with water it should keep your tarps from tearing and make them very solid.
One kind of PVA glue: 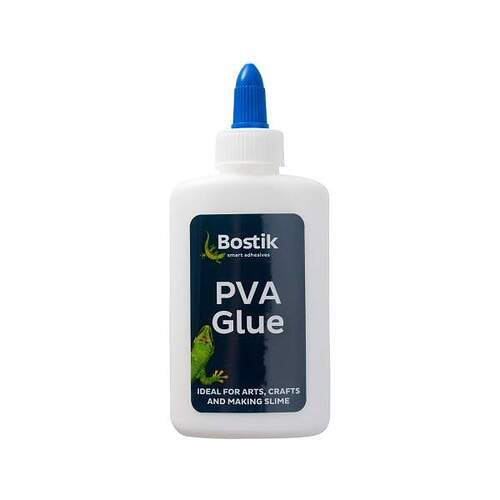 Pretty much any white glue that can be cleaned up with water and dries clear works though.

I have some white silk fabric, very thin. Do you think I could treat that with PVA with a similar outcome? I was thinking of dying it first.

The other thing I noticed were the tie down ropes on the sides of the lorries. It looks like they go thru the tissue and are taught. Was that done after the tissue was in place? Lastly, the german covers often had window covers sewn into the canvas. I don’t have to have them open, but would it be better to just add them onto the cover or omit them altogether? It’s too bad that the kits don’t come with covers already. They were often used in North Africa to disguise the contents or to keep things in the shade.

thank you for all of your help.

Hi Jack, PVA should stiffen up whatever it is put on. I have never used fabric so can’t say what the outcome would be. Soak them first in watery PVA, then lay them over the truck frame in the fashion you want. The eyelets and rope can be added later once the cover has hardened as you will have to punch some holes in it to feet the rope through. If you need to soften up the fabric, just add water. I tend to pant the tarps when they are wet and remember you will need to do both sides if the paint hasn’t soaked through.

Trial and error is a good way to start.