I forget where I saw the comment, but someone was looking for…

I guess this doesn’t come with their Sturmtiger interior kit?

Dan, I just checked my RFM Sturmmorser Tiger kit for you. This sprue is not included in the kit.

Thanks, Dan needs this Sprue.

Why wasn’t this included to begin with? I hadn’t really looked through my 5003 kit when I got it and never realized those bits weren’t there.

I don’t know! I really think this is a cheap out by RFM! When they charge you $85 for a kit and it says “FULL INTERIOR” in huge letters on the front of the box, it should include everything they make for that “full” interior! They shouldn’t be doing this money grab with issuing supplemental aftermarket kits!

As I understand, these are new parts that have only just been designed and included with their latest release.

At least they’re offering the parts as a regular, separate release so that they can be found and purchsed through normal vendors.

So, what is the gouge for this sprue?

Where have you heard that?
Dan needs this Sprue.

The crime here is that, yes, these should have been in the kit to begin with, but 90% of the asking price will be packaging, given how little plastic there will be in the box. Ok, rant done.

Where have you heard that?
Dan needs this Sprue.

The photo at the top by the OP @Newtonk lists the product number (2007) and states that the plumbing set will fit any of the listed RFM Tiger I based kits.

However, it’s not listed on RFM’s website or FB page, which is odd, but not too hard to believe. As @brekinapez says, though, it is llisted on the Scalemates site.

I posted my comments about 5003 five years ago, and I said that the pipes were missing, in this page in my overall summary.

Yes, and I even read it as I have read most of the stuff on your excellent site. However, during the time my particular purchase has sat on the shelf I just plumb forgot. Five years is a long time to think about tiny plastic bits.

Thank you, I’ll be looking for it.

It would be very sporting of them if they did like Academy and sent you a set if you mail in the bar code from your kit that is missing them from the FULL interior…
I know, I know, keep dreaming. I’ll be buying a box of these, too. How are cooling hoses optional?

I believe that these are quite hard to see if only the engine hatch is open.

Dan I was thinking of doing my Sturmmorser Tiger in an exploded view on clear plastic rod. I’ve even got a set of Fingerprint Designs internal stenciling for it. And zimmerit and a few PE sets. Really go bat shit crazy on it.

I’ll be looking forward to seeing that! 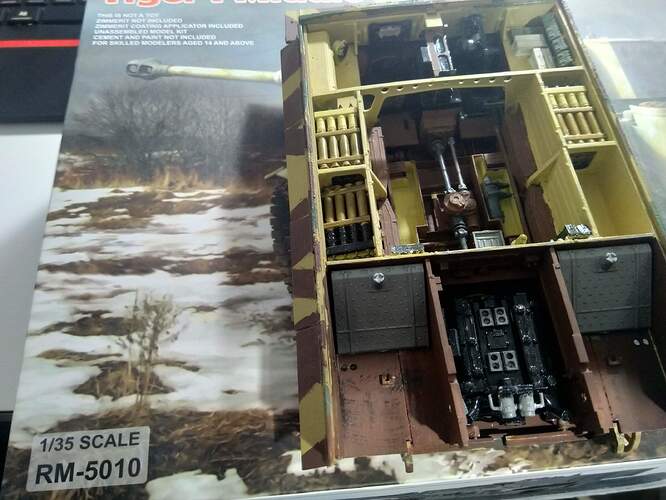 Here is mine, build back in 2018. (colours are not correct since I have limited colours back then)

On my good news, the engine can be removable, it can be fixed in without glue, which is great. 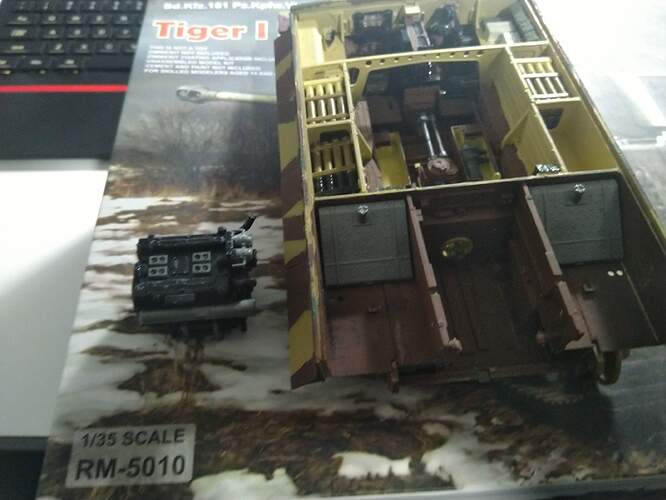 On my bad news, my local store where I bought this kit will close next week… So I have idea how to get that last spue. And even if I do. it is still a 10 CAD shipping to start with…