Looking for some band style duckbill tracks for a Jumbo sherman. I have the Meng kit, and no time or inclination to deal with the multi-part links. It suplies some nice rubber band tracks, but without duckbills. And the duckbills they supply for the plastic track cannot be glued to the band type. aaarrrgggh.

anyhoo, hoping someone may have replaced their band types from a tamiya/academy/asuka kit and have them left over…

Im sorry I dont have any Rubber Band tracks, but I DO have a set of duckbill end connecters I could send if you decide to do multi part tracks.

Thanks, I have those.

I just want a nice quick build for a change. 7 parts per link leaves me a bit sad.

Thank you for the offer.

Are there even rubber band tracks with duckbills?
I need to do somerthing similar for an 1944 M4A3 in the Ardennes, but the replacement tracks are kits in themselves.
It has gotten ridiculous…

Yes, there is at least one lot from academy and another from a asuka kit.

Theres also a set of DS from Dragon with duckbills.

I’m pretty sure one of the Tamiya Sherman kits has rubber band tracks w/duckbills.

@Mousemuffins i will have a look tonight after work, I believe the academy M10 I have may have rubber band duckbill tracks, if so would you be interested in trading for your Indy link versions?
Mike

possibly. I say possibly because I did at least attempt assembling them before I threw my toys out of the pram. I’ll have to check there is still sufficient bits…

I DO have the end connectors though.

Okay, I think I’ve come up with a solution. 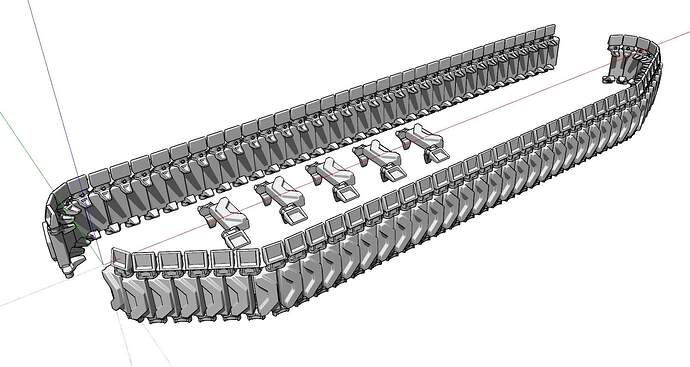 Curious as to how they would turn out. I am dubious, however some of the 3D stuff is getting pretty good so my curiosity is peaked.

I checked my Academy M10 & it does have rubber band duckbills, if you are still interested in them?

How much would you like for them/postage to Australia?

Were in Aussie are you? I am in Melbourne? I am happy to do a trade if you want? I do mainly 1/35th WW2 & Cold War Soviet stuff.

I don’t have much of a spares box for swapping.

Where abouts in Melbourne are you? I’m in Bundoora, but work in Brunswick.

I’m in Truganina, but work in Keilor Park, I belong to IPMS & we have our usual club meet on the 3rd Tuesday of every month at Ashburton library , if that is easier for you?

Hopefully this may help. Find the old Tamiya M4A3 Kit MM122 circa 1981. It has the rubberband tracks. They are the rubbish tracks that you fold and use a hot knife/small screwdriver to melt the pins to loop the whole track together.

Update:
Found the instructions online to help you see what I am talking about
132554-42-instructions.pdf (scalemates.com)

Hmm. Seems despite being in the same location, we are about as far apart as we can be…

Would it be awkward to throw them in an envelope and post? Otherwise I could wander along to the IPMS thingy. Which could be fun. Do you guys have a Facepage or somesuch?

Yeah, I saw that but was unable to find one for a price that I couldn’t just purchase a new academy kit for.

I am happy to do either, as a club we always enjoy having guests for the meetings, some even become members, if they have enjoyed the experience lol