Watch at your own risk after ~:42 seconds

Uh… what is that guy wearing?

I thought the little black dress was traditionally accessorized with a pearl necklace but that may be later in the video.

Thank you for the risk warning

Cameraman is a real profession.

It may or may not be a little black dress on a rather large modeler. Can neither confirm nor deny. Whatever the garment is, it appears stuffed beyond capacity.

Definitely in need of an experienced camera operator…and editor…

Uh… what is that guy wearing?

In the video one commenter wrote:

IS that a work apron… or a little black dress?

now it appears you’ve revealed an aspect of your personal life which I do not find offensive… . yet others might. If wearing women’s lingerie makes you a better modeler then so be it.

I will say this: the video gives a whole new meaning to the term “man boob.”

I’m dreading a new thread in the offing: ”So what do YOU wear when modelmaking?”… 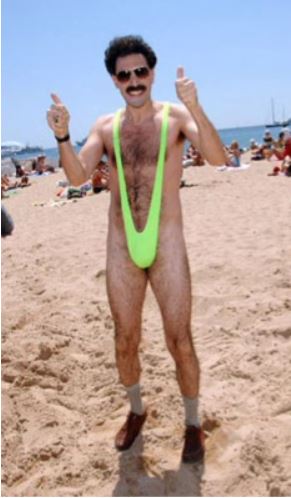 Wonder if he’s wearing sandals ( or flip flops, Or thongs I believe the Aussies call them??)

FWIW - the background behind this “discovery” I was researching build reviews of Meng’s Early Panther A on YouTube with the Roku in the living room. My wife is kind enough to tolerate an occasional kit review video or two.

We both erupted in laughter at this video.

Gross,it will take awhile to unsee that.

And I bet he’s in his Mom’s basement and he hasn’t showered in way too long.

Actually, I kinda feel sorry for MENG in this video.

Many years ago I read a story told by a model building airline pilot who took a special case with him on flights where they would stay the night at the destination.
One time the airconditioning in the hotel room didn’t work so he built the model he had brought on this flight in the hot hotel room, wearing extremely little, well, … nothing actually …
After a while he managed to fumble and almost drop the model airplane (what else, he WAS a pilot after all), he saved the plane but spilled CA-glue on a very inconvenient spot.
Did I mention he wasn’t wearing anything?
CA-glue works very well on skin, especially slightly humid skin (hot room, no A/C).
When the crisis with the airplane model was under control he realised that his “pride and joy”
was glued to the inside of his thigh …
Call the reception and summon help or don’t call anyone?

I think he managed to get unstuck after a while …

I once thought that getting superglue in my eye was the worst cyanoacrylate related modelling incident I’d heard of. Not anymore

There was another, British, guy. He was assembling some figure (medieval knight??) and had finally gotten the parts lined up.
One hand holding the parts together, one hand holding the CA-bottle,
and the third (dang we only have two) so he bit down on the CA-bottle cap,
got it unscrewed, dang it was blocked so he bit the top to get it open. Got the figure glued and realised his teeth were glued together.

Phone one of the flight attendants and ask her to bring him some remover??

Actually, I kinda feel sorry for MENG in this video.

Indeed, MENG definitely didn’t ask for their name to be associated with that!

That’s scared me for life …