I’d like to show you my latest finished project, Zvezda’s T34/85, done for the T34/85-campaign. It was a build with some bumps and pitfalls, many if not most caused by me not paying proper attention or simply not “getting into” the model.
Anyway…

What I worked with and what I hoped to achieve: 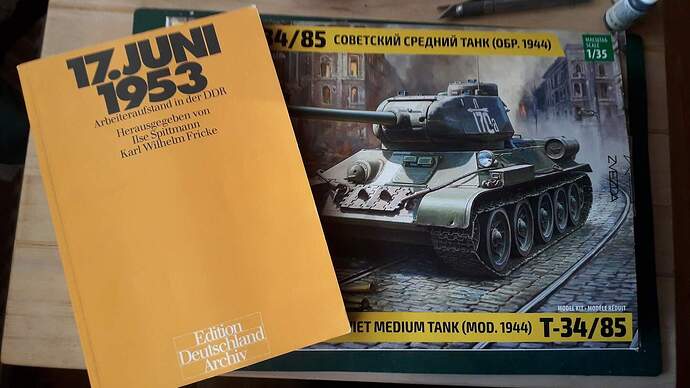 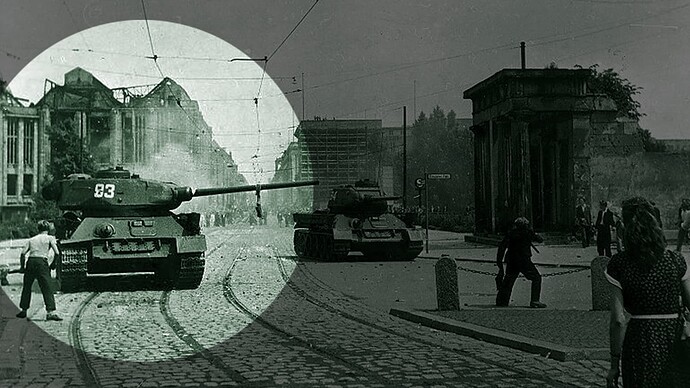 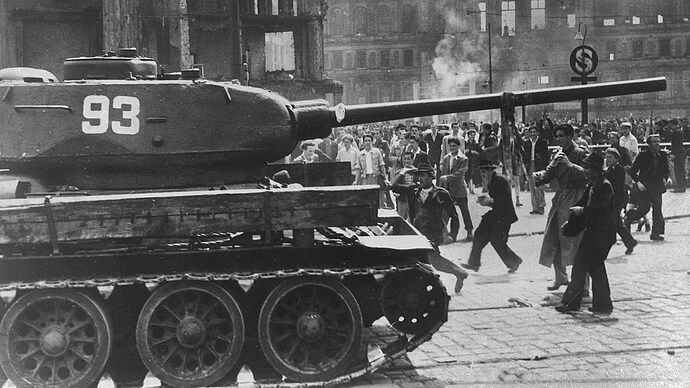 Zvezda has included this nifty jig for assembling the link’n’length tracks, which I ended up using for my Kursk T34/76. For this kit I used Dragon’s single link tracks, a first for me. 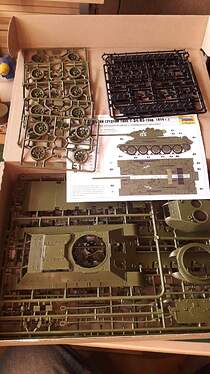 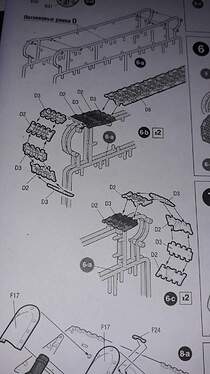 Initially the build was pretty straight forward and everything went together well. Fit is good as are the details; nice and crisp. The turret has a nice cast texture to it too.
One downside I encountered were a good number of very small parts, which in quite a few case could have been avoided. And inevitably some went airborne, to be never seen again. 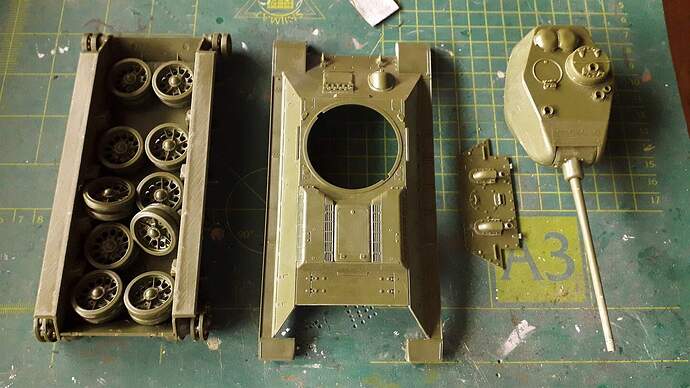 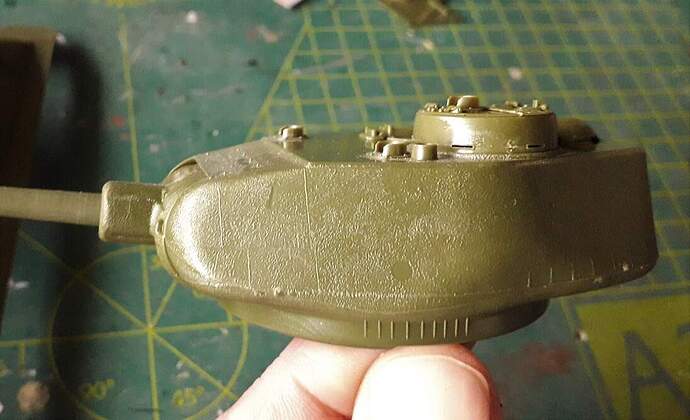 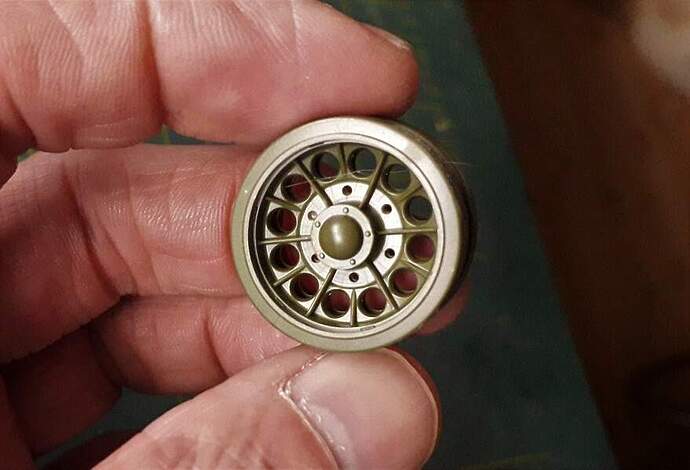 Great stuff Ron! I too have plans (amongst a zillion others) to depict something from this event - probably this one: 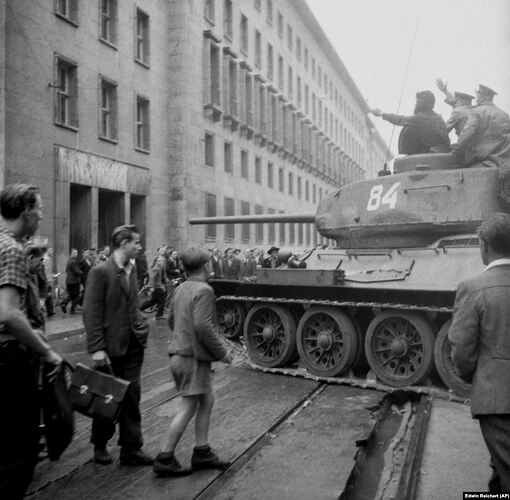 and I also identified the same model. So, I’ll certainly watch with interest.

Like I said I did not get into the flow with this kit. Don’t know why, but it felt like grinding on. Which resulted in me not paying proper attention, causing a number of mistakes. Like the external fueltanks. Which meant having to tear them apart again, not adding to the overal neat finish and adding to my frustration. 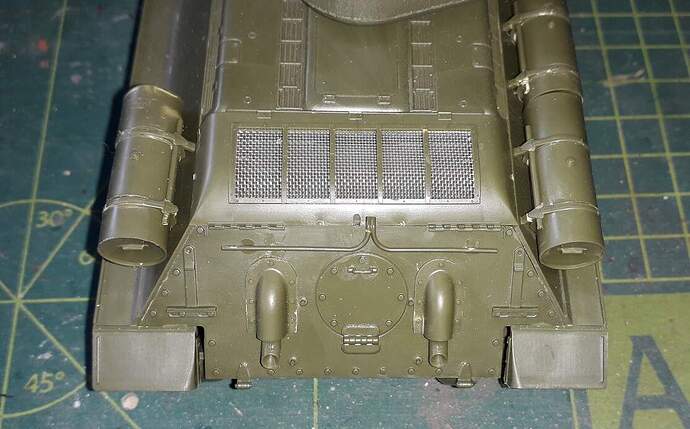 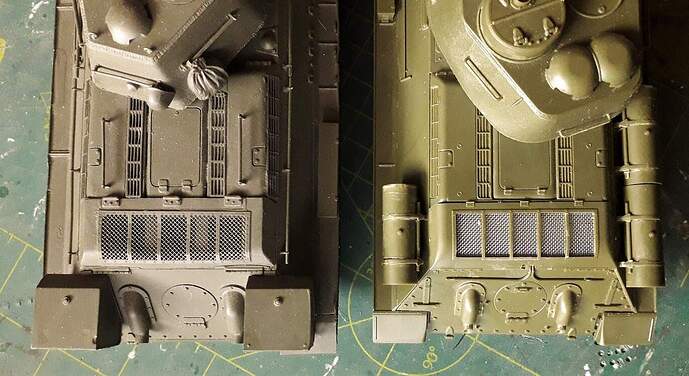 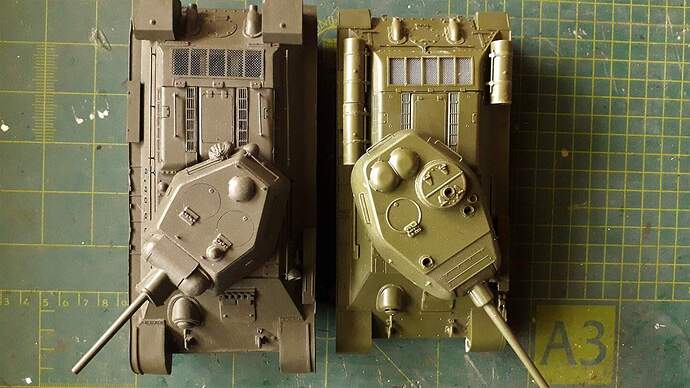 I painted the tank in Tamiya Field Grey and, together with the clear coat, this turned out a nice green. The simple “93” decals (from another kit) were added… and these went on smoothly.

The characteristic beams are the tails of firework arrows and I thought they had the right size. Problem was that I measured/compared them to the tank before the toolboxes had gone on. I also made the supports to high,so the whole construction was too high. The turret could not traverse! Which meant taking off the whole thing, including the tiedown brackets and start over. 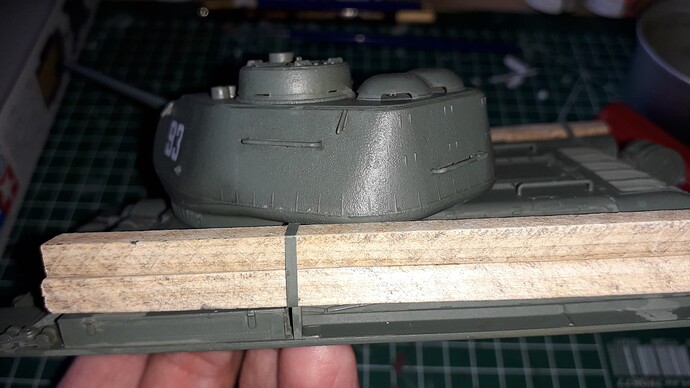 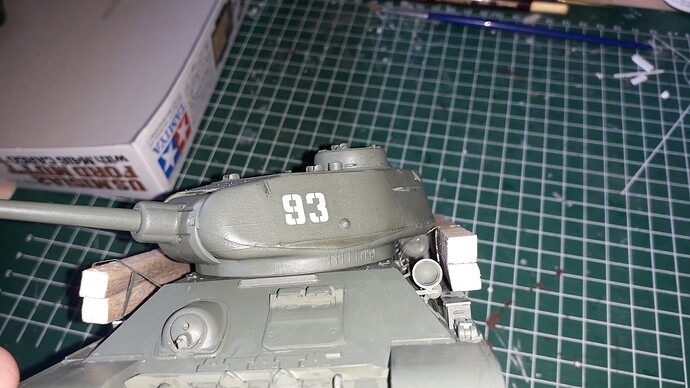 Additional tracks and a board were added to the front. 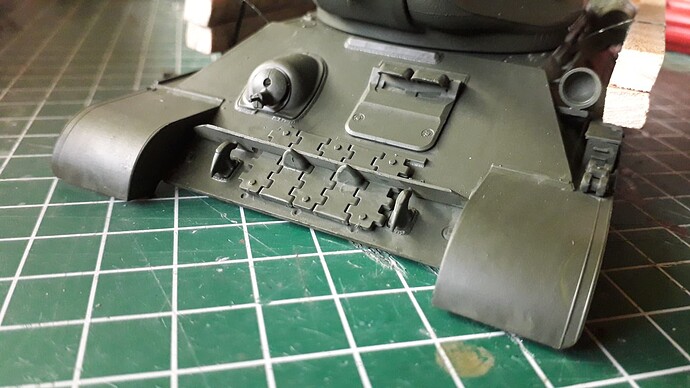 And then came the tracks. Single links for the first time… a fiddly business!
The right side went together without an issue. The left side however… 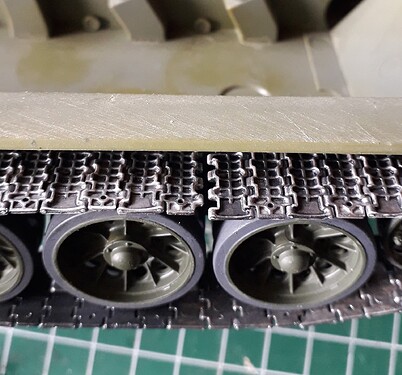 I ended up cheating a bit, elongating one track by a cutdown piece of another. 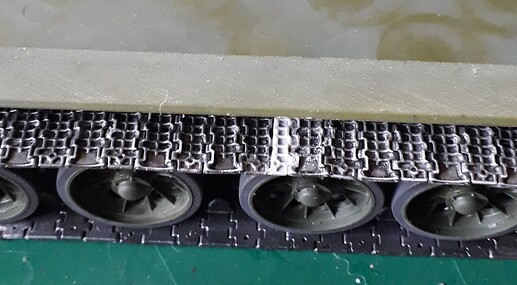 Painting was done with gunmetal as a basis, then a black wash, then drybrushing in natural steel, a brown wash and rust along the outer edges.

A tip from a fellow modeller; look at the idlerwheels and their axles… and indeed, these can be turned and tightened every so slightly!
Just so you know.

I kept weathering to a minimum.
It is a garrison tank in a city, so very little in terms of mud and dirt.
A simple neutral wash had been applied earlier on and the whole thing was completed with a dark one around the lower half and pastels for dust. 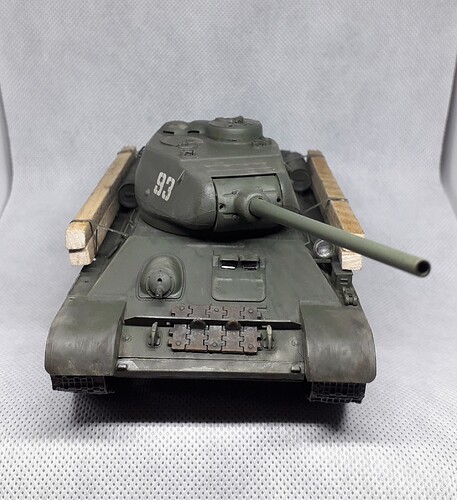 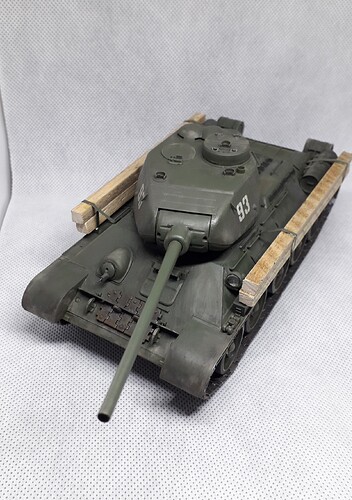 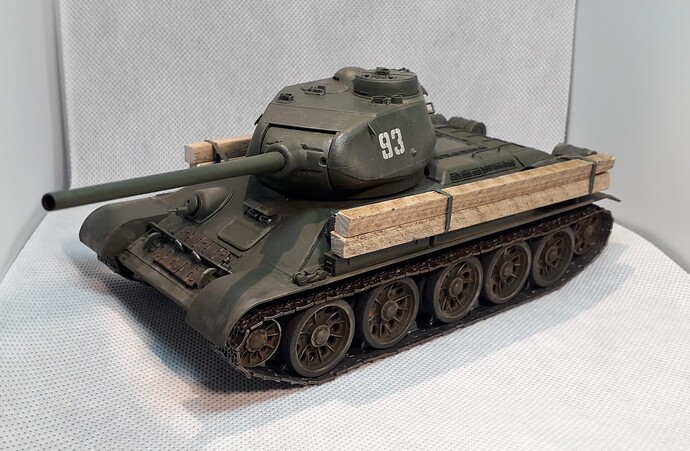 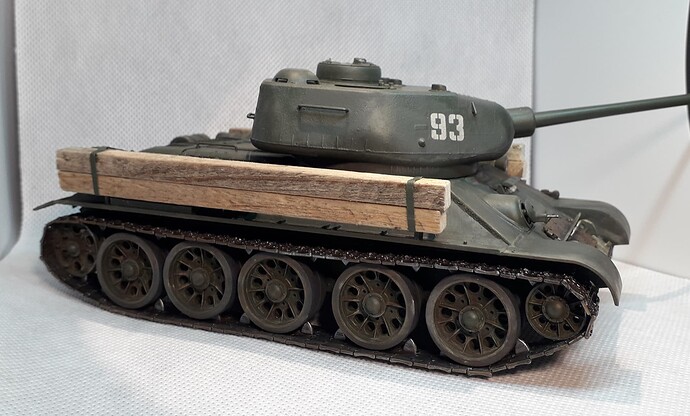 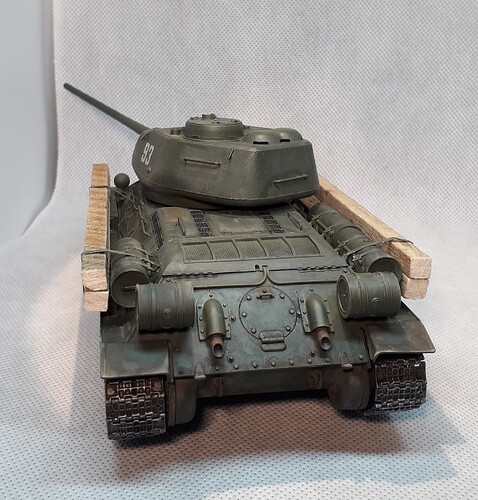 And I have taken to displaying the finished models with some real items from the era, preferable with the appropriate year on it. Small, personal things like coins, letters, postcards or insignia. In this case a DDR cap cocard and a 1 pfennig coin. 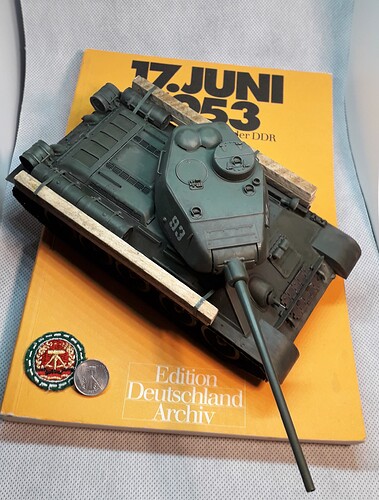 I have several more of this one, together with one of its sisters. 83 or 85. Can’t recall right now.

Great job on this one Ron! Despite all the pitfalls! Nice save on the track. That’s the way you do it. Devise a solution, work it, and motor on. I’m glad you were able to struggle through this with little mojo but you came through in the end. Excellent overall finish and I really like the wood beams.

Ron, this is seriously good stuff, and very useful info re the Zvezda kit. I also like the final portrayal.

All redolent of the way the Soviets dealt with any dissent whatsoever. A timely reminder that the Cold War wasn’t all bratwurst and beer.

Thank you.
It indeed is and this is my second build depicting such action. The first one was a T-62 during the Prague Spring in the Czech Rupublic '68.

Next will be a JS-3M in Budapest, Hungary 1956. Same scenario, but much more violent and much more bloodshed.

Thanks for campaign addition, the build looks great.

This is getting a bit spooky(!) I also have in my stash a couple of Trumpeter IS3Ms although I wish to model them as opponents on NATO’s Central Region eg “What an M48/Centurion gunner might see through his sight c.1950 or suchlike” but have also earmarked a Miniart T-44 (with sadly, a million parts) to represent the following: 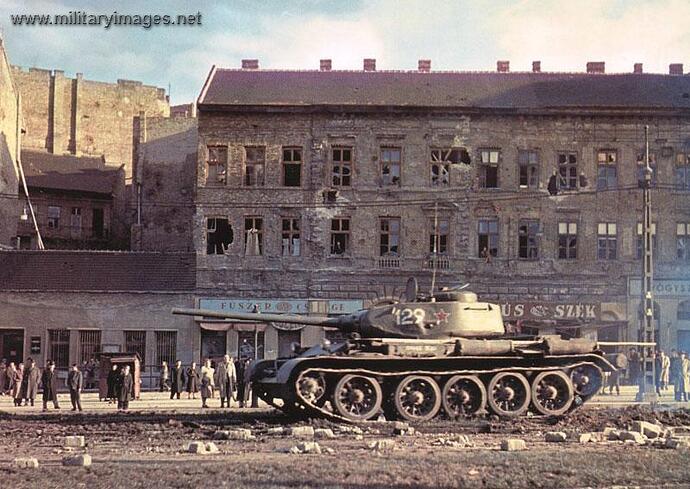 Keep at it Ron.

Nah… I’ll stick to the JS-3.
But when we are thinking alike… Any suggestions for Poland 1956, Poznan? The Poznan June? I only find images of Polish T34/85’s and was hoping for a JS-2 to pop up, since I (think I) know the Poles had them at that time.

Interestingly enough, the early NVA had the IS-2 (some good images in a Tankograd book somewhere).

Reagrding Poznan '56, was the OT-64 a player that early? I’m at a loss as to how to get one as Armo don’t seem to be in business anymore. (I would like one despite it’s probable non-appearance at Poznan).

I saw some BTR-152’s. I guess the Poles mostly had redundant equipment in those days.

Again, in my stash! They’re the Skif ones but I’ll build them and try and get the best from them.

yes, good savage!
i prefer remove indler wheel pin and put a mobile part to glue in corret position, but it’s not so easy