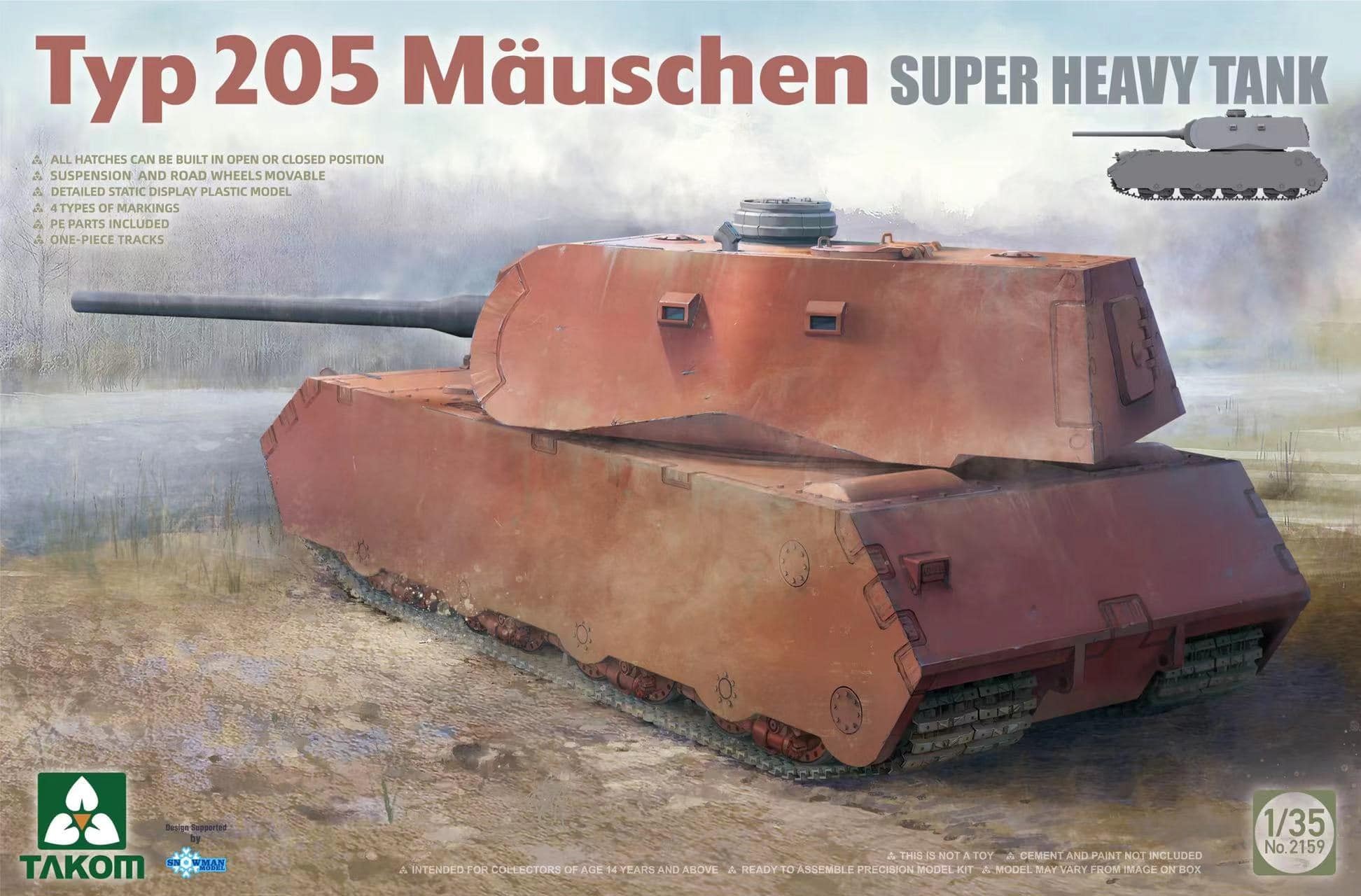 This is partial text from the full article (usually with photos) at https://armorama.com/news/takom-super-heavy-tanks
brekinapez July 30, 2022, 3:37pm #2

The next paper panzer comes with a small ball which seems at first to be a children’s toy but upon examining the painting instructions you realize it is actually the Earth and that you are supposed to place the tank atop it, crushing it underneath as the Germans realize too late they finally made one just too damn big.

The Japanse tank looks as though the were trying to reinvent the super heavy battle tanks of the 30s. Maybe this was from the 30s. Why don’t paper panzers have the Porsche and Henschel versions?

The crazy thing is that the Japanese OI tank was built. It was a product of the 30’s as well. The armor consisted of to plates of armor bolted together to achieve the desired thickness. As you could imagine, the tank tested poorly and the projected was abandoned. The Japanese kept this project a secret and dismantled the tank some time before the allies landed. All that exists of the tank is a track link in Japan as well as the drawings. Fine Molds bought these drawings and came out with a 1/72nd kit. I actually want to build this model. I get the point of wanting models of vehicles that actually existed, I feel the same. But I am in with this Sort of paper Panzer.

Why do these companies bring out useless fantasy krap kits like this instead of say, a M-56 or an M-55 SPG ?

Because they sell perhaps?

I always suspected consumers buying them had something to do with it.

I’ll say the same thing I say to everyone who asks why…this stuff sells. There are people who only build this kind of stuff. I actually would like to get the Maeuschen. It looks like a cool kit. I’m sure these companies do their research before releasing these products.

Dion’t get me wrong - I would love to see an M56 and the mighty M55 in plastic, but I fear both are some way off.

Paper projects will always fascinate; I remember gazing in wonder a million years ago at a Bellona 1:76 scale drawing of the E-100, never thinking we’d see one in plastic, let alone all the wierd and wonderful stuff since.

I get they sell and I can’t fault companies for that! But there are some very important machines that have been seriously neglected in styrene that would also fly off the shelves

and there is always World of Tanks.

You honestly think an M55 or 56 would fly off the shelves? More than these paper panzers? That is why you are a modeler and not model company owner. Plus. Of all companies to complain about, you chose Takom? Really? The one company that put out an M114? Or a fv432? Or a Luchs? Or an M9? Or a M60 with both a dozer blade and a mineplow? Come on man. Takom is constantly pushing those boundaries. Stop complaining. Remember the 90s? Where we might get a new kit every 3 or 4 months? Those days are long gone. Be happy we get all kinds of companies doing all kinds of things. Today, there is a chance we can get an M56 or M55…oh by the way, takom is doing an Ontos in 16th scale. So there is that.

Bleagh. how obscure, unlikely or even just made-up does a German subject have to be before even the die-hard fans won’t buy it? This ones not even pretty or sufficiently different from a maus to make it interesting. The Panther Kugelblitz was at least cool looking.

Perhaps not a M56 but there is precisely 1 comet in styrene. And it’s 17 years old and it’s neigh impossible to get. Tamiya is finally bribing another out, but in the last 17 years many fictitious paper panzers have been made.

I get why companies make them, they are popular, but I am willing to bet the Comet with sell better, as did tamiya Hellcat.

I don’t fault people for liking the paper panzers though, to each their own! I just prefer vehicles that had a place in actually history

I don’t fault people for liking the paper panzers though, to each their own! I just prefer vehicles that had a place in actually history

I’m weird. Nowadays the first thing I do when seeing an accurate kit of something that existed (often in quantity) my first thought is how to turn it into something that didn’t. This is because if you want to do your own thing with regard to a SciFi/Fantasy build, it’s best not to start with something from that genre as it’s origin will be all to identifiable to aficionados whatever you do with it. Then there’s also the problem that with my declining skills even an OOB build will probably end up looking like a “What if?” anyway…

I understand where you are coming from, but it is notable that all of those vehicles you listed were real and put in service.

Takom has the beginnings of a FV 434 and Abbott, and considering the FV 432 flew off the shelves and is one of the rare beasts that they have done a second production for, likely a very lucrative market. In fact a lot of the overlooked cold war stuff would likely be big sellers - the Ferret and Fox armoured cars, Saracen, Eland (the extension of the AML series), and on and on. Even new versions of the Kanonenjagdpanzer and Fuchs would tap a market (the Revell ones are abysmal)

And if I read things right - These are vehicles in WoT and the like, so likely would have appeal there too!

Nah. Assuming the FV 432 was a good seller because it sold out doesn’t take into account the number produced. I’m thinking Takom and the like frequently make lower cost aluminium tooling rather than expensive steel. From memory, Aluminium runs about 15 to 20,000 units before needing replacement, vs virtually unlimited for steel. Also time in the molding machine costs money. Selling all units just means they probably estimated well the number of potential sales.

Just as well it’s not me who has to work that crap out.

Like i wrote. We are in a golden age pf modeling and with 3d printing, it just keeps getting better. I don’t care if a new company or an old one comes out with another tiger 1 or a zero or a p51 mustang. The more the merrier. An example would be takoms tiger 1 with interior which had just released pictures. Does any of the other companies tiger 1s make takom money? Nope. Plus, takom has all the actual interior stuff that is missing in other companies command tanks. Just remember that takom making brand new kits and selling them, leaves the door open for other things like the M55 or an OPFOR sherman. Maybe a new line of m113s? Or warriors or Bradleys. Wanna talk about missing kits? Warrior has 2 kits on the market. The bradley, 5? Semi modern versions of the bradley and only Tamiya does an M2A1 ( academy is literally the same molds)or an M2A2. What about all the spin off versions? Do i complain? Nope. I know sooner or later they will show up. Onward and upward!! Now where is the T18 boarhound or the wolfhound? Or 80s military caterpillars or a nice Tamiya 32nd korean war era F4U4 corsair? Haha.