More done to this. 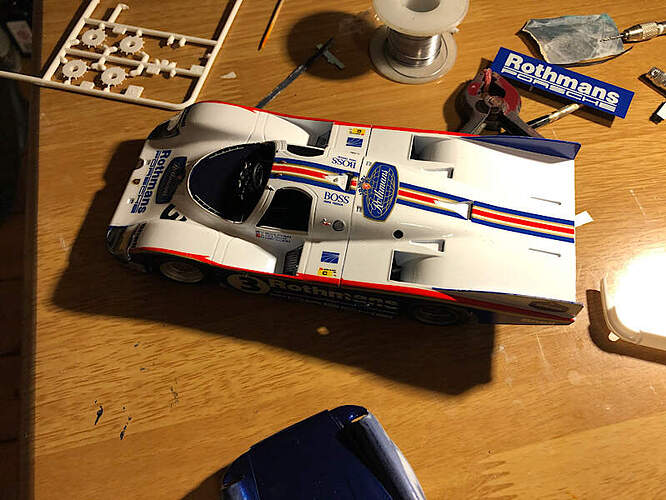 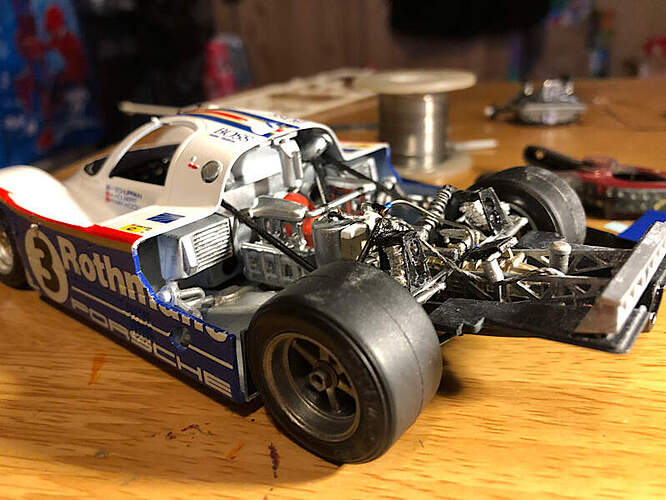 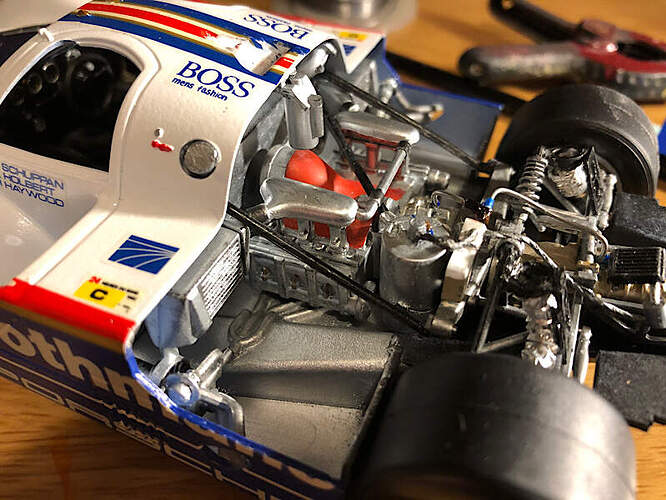 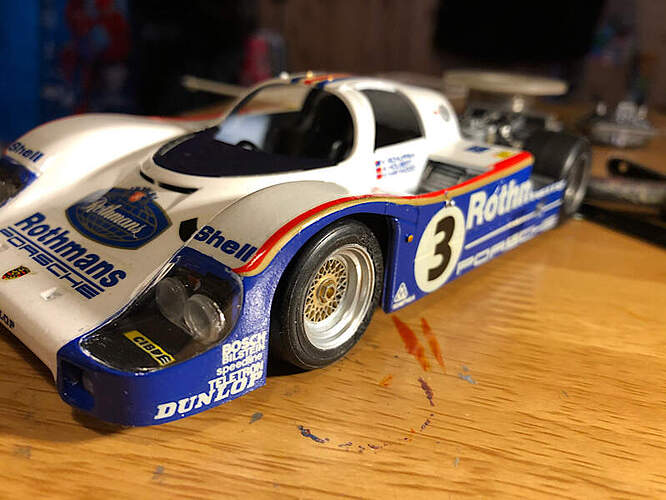 Ken,
The Rothmans 956 is really look spectacular. Decaling, especially those Red/Gold stripes look dead on center. And the detailing in the engine compartment really has paid some dividends for sure.

Every time I see that dry sump, I can’t help but wonder just how much oil it really does hold.

Really knocking this one out Ken. Looks great, under the rear cover looks spectacular. 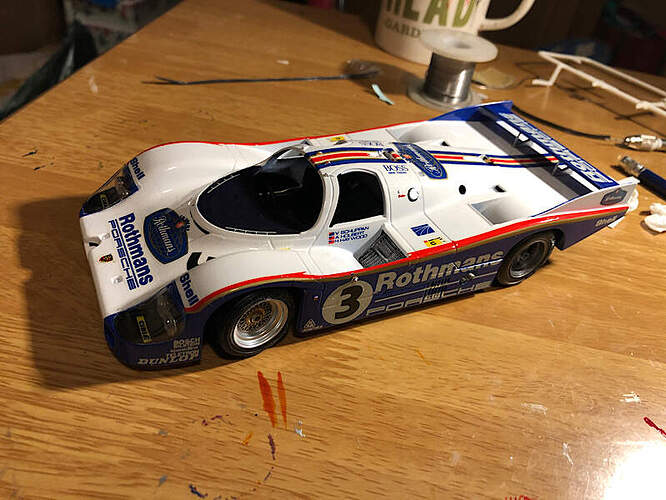 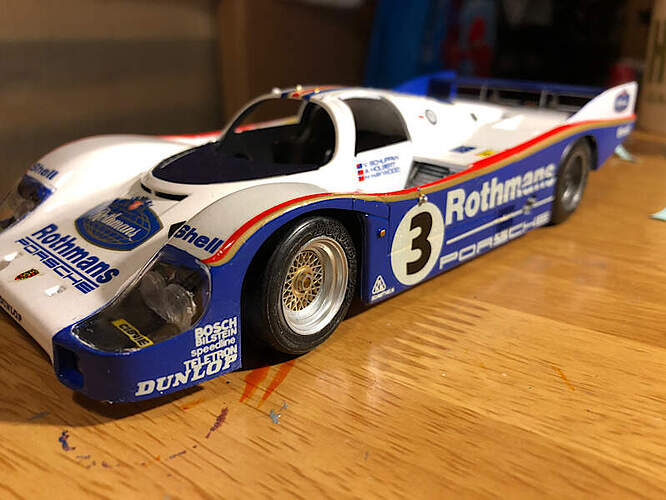 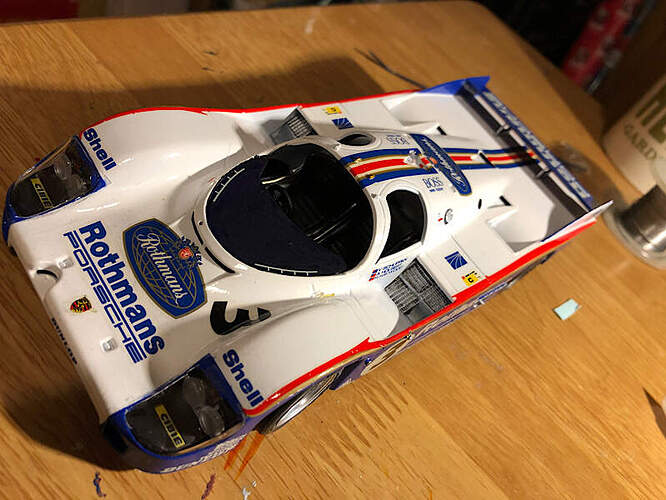 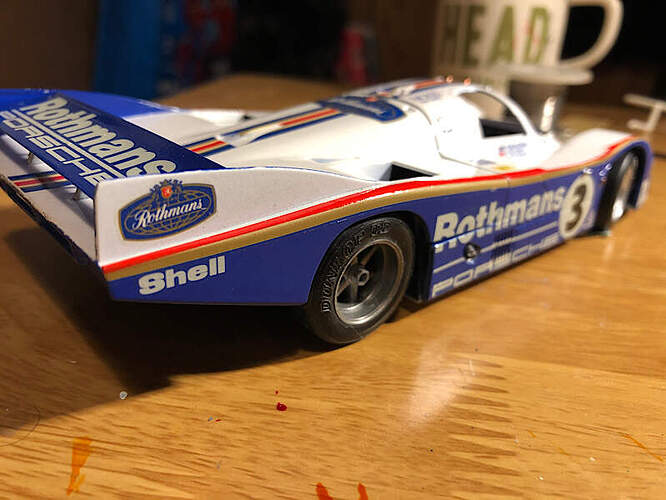 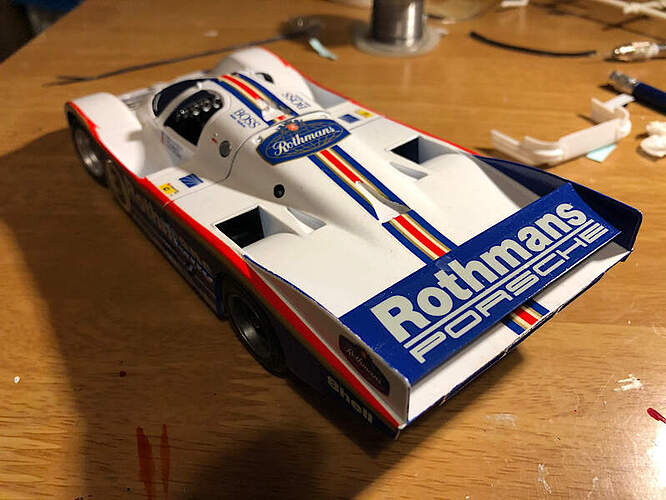 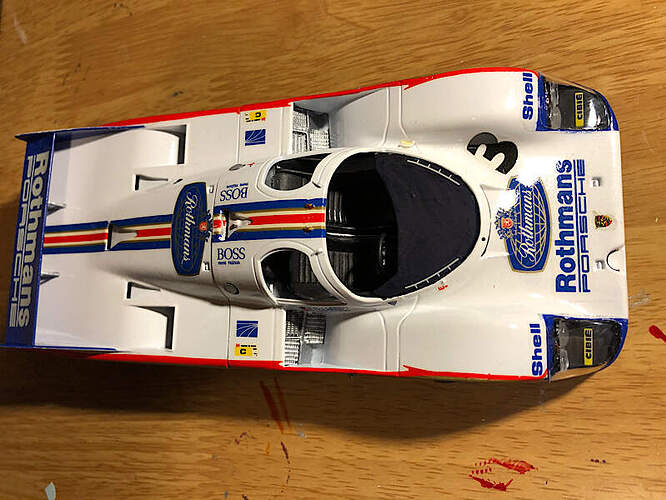 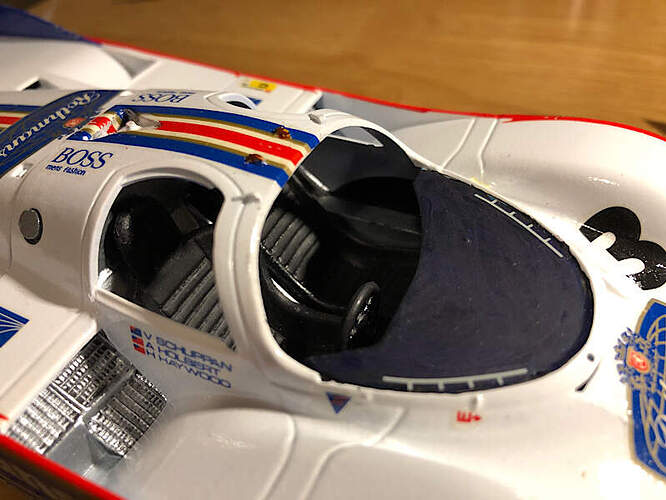 Ken,
Looking good, but there’s one issue with the rear wing. You have it on backwards. The Rothmans faces forward which would then orientate the wing correctly. The high tapered lip is the trailing edge, while the blunter edge is the leading edge. Hopefully, you can pop the wing out and turn it around. 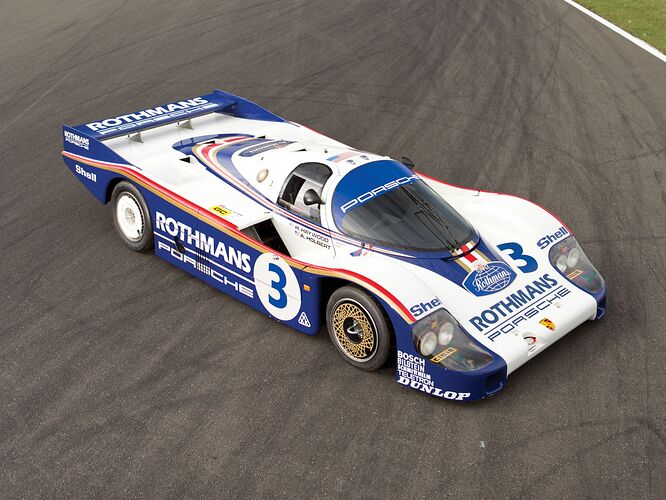 As a side story, way back many years ago some where in the early 1970’s, I built my 1st model aircraft as an adult, which was a 1/72 scale P-47. My brother pointed out that I had put the stars on upside down on both wings!! After all these years, he still brings it up to me every so often.

Ken,
Glad to hear that it’s just a quick flip job. Like I said, I’ve done it a few times myself and did glue the wing in place.

One would think that the sponsor logo on the rear wing should face backwards not forwards as it makes way more sense. 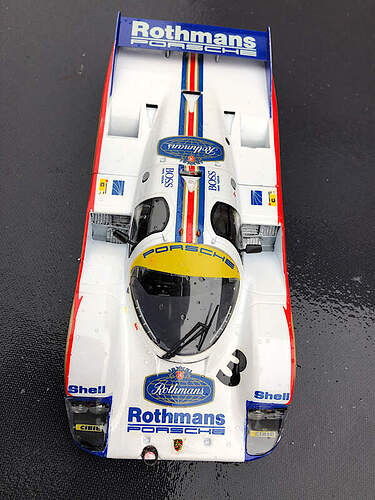 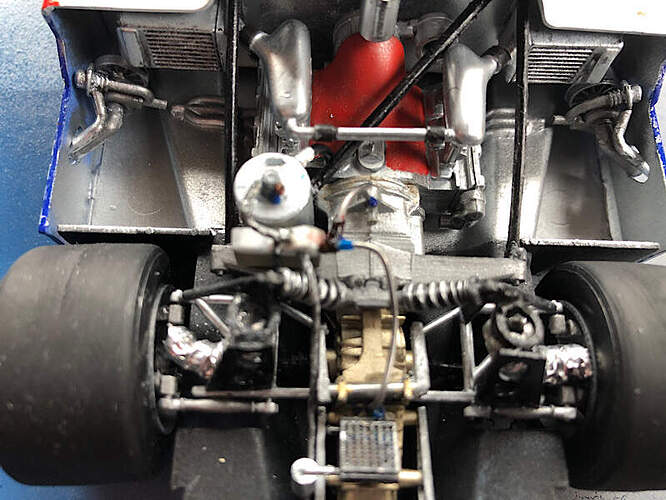 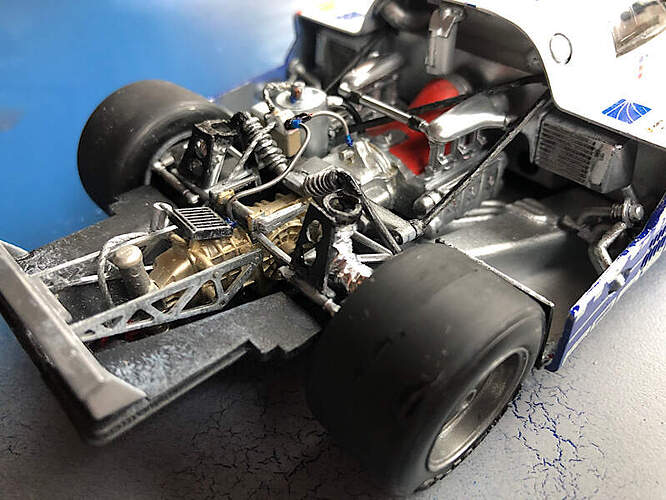 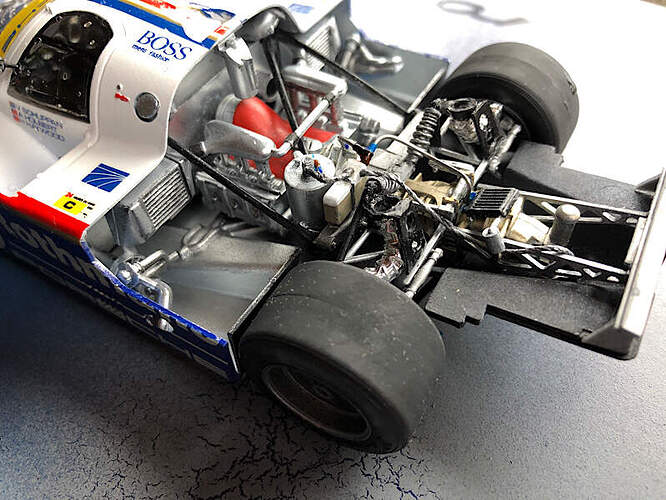 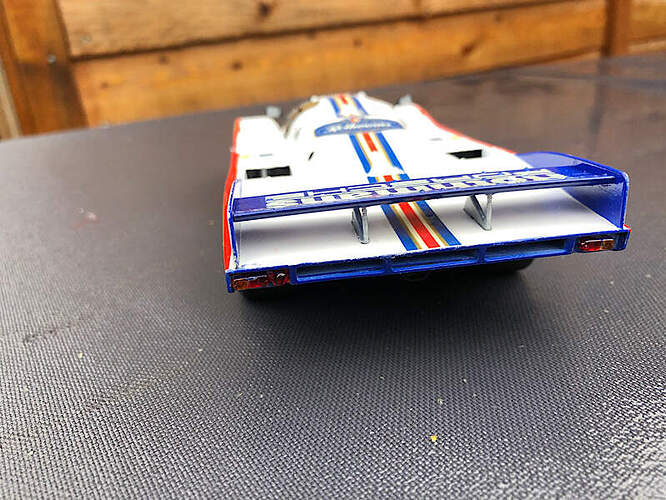 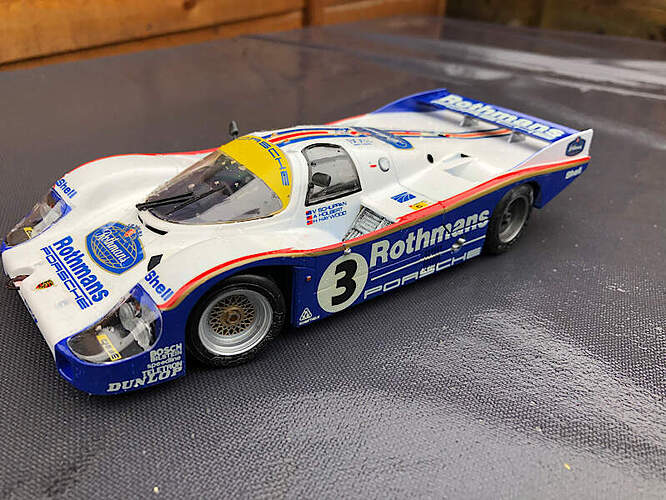 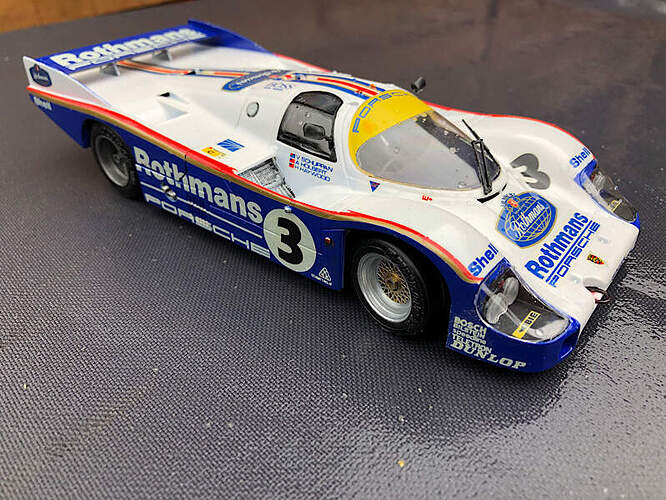 Ken,
The Porsche 956 really came out great. i’m really glad that you were able to flip the rear wing into it’s proper orientation.

BTW, I figured out why the sponsors logos on the rear wing face forward and not backwards. As you tilt the wing up for more downforce the sponsor logo starts to orientate vertically, so if it faced backwards it could end up upside down.

Ken, a fantastic finish! Love all the details you were able to add and bring out under the deck lid. The decalling came out spectacular too!