Tamiya M3A1 Scout car: an exercise in painting and weathering

After many years of publishing all of my modelling work (and more often than not, work I was doing for someone else’s needs) I found myself completely burnt out on the hobby. For the last two years plus I’ve really only been able to assemble stuff, in fact I probably now have about thirty five models sitting in sub assemblies waiting for paint.

There’s always been something almost therapeutic for me when it comes to assembly, for me it takes much less thought than painting and allows my mind to wander and work things out etc. I have always referred to it as ‘finding oneself while losing oneself’, but enough of this philosophical drivel, I’ll get to the model. 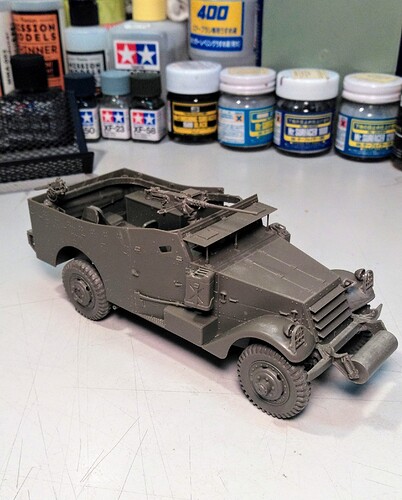 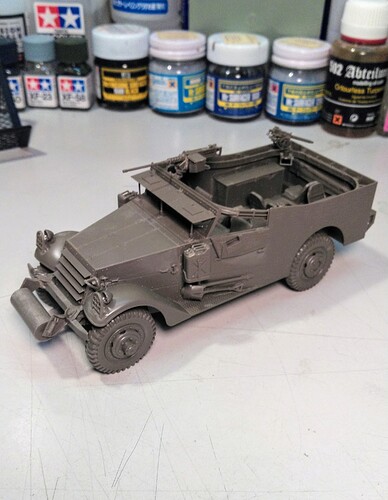 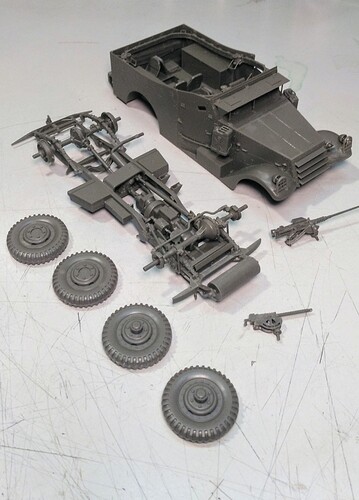 These are the main subassemblies I’ve broken the model into for painting, if I decide on any sort of stowage I’ll sort it out after paint. I’ve kept the model ‘out of the box’ to avoid getting sidetracked and risk losing interest but I won’t lie, those oversized headlight grills and a few other simplified or just straight missing details do annoy me but let’s soldier on, this is about paint!

When it comes to primer I’ve long since given up on any of those acrylic versions, they just don’t hold up as well as their solvent based brethren. My first choice is MrHobby lacquer based primer, in this case black.

After coating the model and letting it sit, I’ll go back over the model with just lacquer thinner in the airbrush, settling the primer in even tighter. 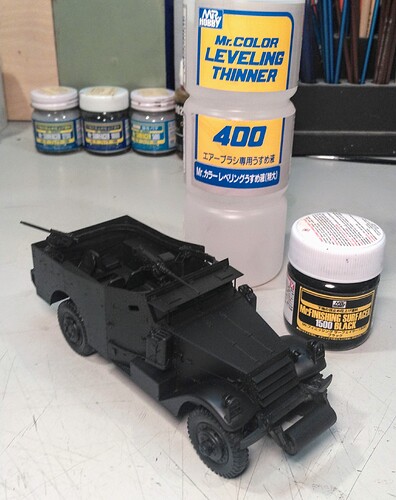 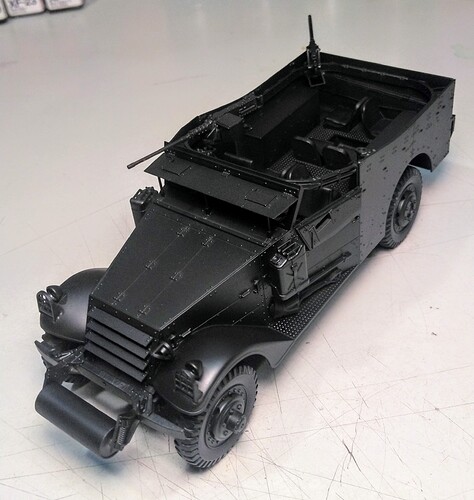 I let this dry overnight and begin painting the next day using LifeColor acrylics. LifeColor are my favorite paint for military vehicles, they dry so flat compared to anything else I’ve ever used. This can be a bad thing if you’re not expecting it, wet shiny paint doesn’t look like the same color when it’s powder dry and the color shift can throw people off.

Note: This does not represent the color at all! My phone camera and bench lighting are making this look much more brown than it is 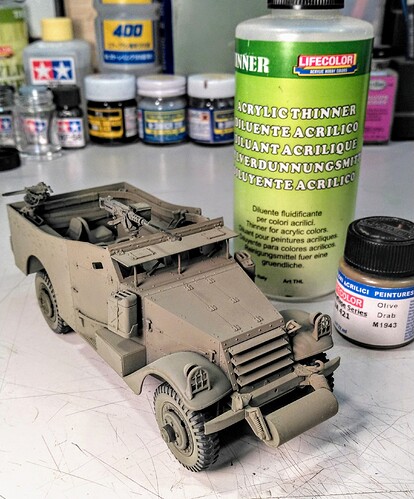 I’m not the biggest of fans when it comes to decals and Tamiya can make some pretty thick ones at times so I’m going to paint as much as I can. First things first, stars. I have some stencils and some masking tape and get right to work. 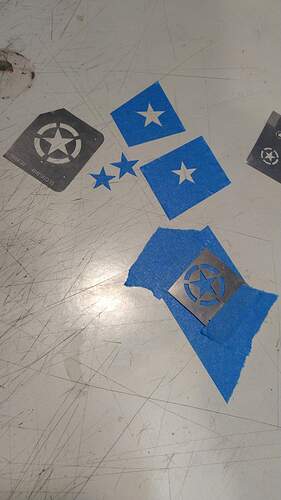 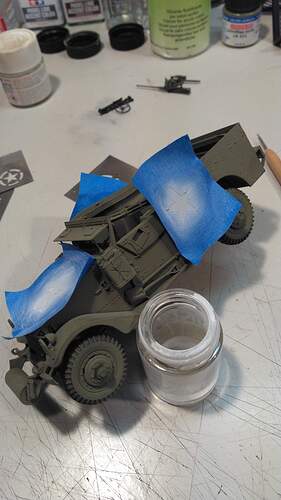 ^^^ thats a more accurate representation of the color

I used Tamiya paint thinned with lacquer for this task, I can get the paint much thinner this way than straight acrylics, so this way I can avoid a big ridge after pulling the tape from too much paint being flooded on. 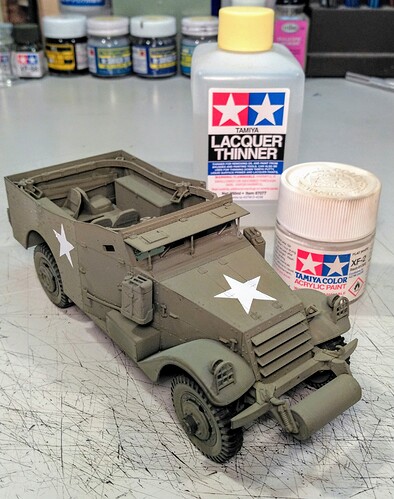 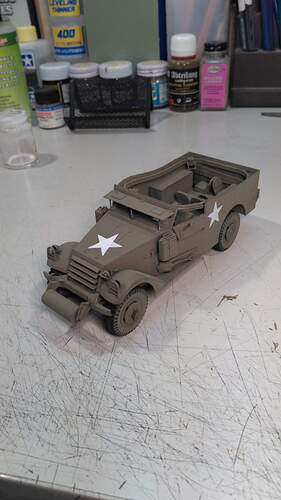 With the stars on and dry I’ve started picking out the details like seats, tools, tires etc. I’ve even painted the Jerry and a slightly different color of Olive drab. I’ve also applied a slightly different shade of Olive Drab to the entire vehile via sponge. This isn’t chipping, this is just to add some variation to the solid color and serve as a foundation for the weathering to come. 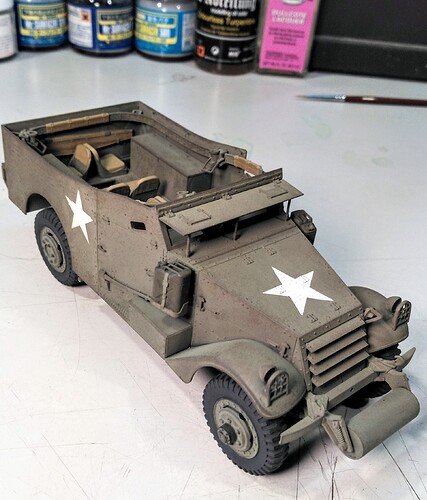 In my next post I will finish adding some more details to the interior and getting them painted as well as starting with washes and filters and perhaps the first of the earth effects. I may even make some stowage for those two front fenders to hide the missing footman loops as well as the molded on hood lifting handles.

As always comments, questions and criticism is always welcome.

Hey Ken, great to see you here, and painting! I’ve missed you at recent Armorcon shows. How have you been? I totally agree with you about Lifecolor paints. They are the best kept secret of the armor modeling world. After decades of airbrushing and testing, this year I switched and bought Lifecolor as my stock paint. Lifecolor beats Vallejo, Mig, and AK hands down in every category.
I love what you’re doing with the scout car. Your finish, as always, looks excellent already. Great tones on the OD and I like the subtle variations.

I really like your final step mentioned above, which I think is something that often gets overlooked. When olive drab paint is exposed to sun and the elements, it gains a powdery patina that is easily rubbed away where hands and other objects come in contact. It’s an effect I’m still working to get right. Looks like you’ve nailed it.

Some really nice techniques there and ones I will practice. I like the hand painting stars, I think sometimes on vehicles, U.S or German, the markings can look to crisp and precise if that makes sense. I’m sure alot got done on the field and touched up, so you would see little inconsistencies with over painting or running …I remember doing the IFOR ones by hand on our wagons in Bosnia, they were shocking lol…
Really great work and looking forward to more.
Also, agree with the Lifecolor paints, they do go super flat .

@SSGToms Hi Matt, long time no see, great to her from you!

You’re right about my absence from the last couple Armorcon shows, life just got in the way. I actually had a hotel room reserved for this year but, well, you know.

I’m sure I’ll see you at the next one.

@Namabiiru Hey Mark, I’m really stoked to read you describing the exact thing I’m trying to portray without telling you ahead of time.

@Johnnych01 Hey John, thanks for the real life comparison, that’s the type of thing I try to aim for. I’m working from a bunch of wartime images and just as you describe, some of the markings are pretty rough

. Some are crooked, some are messy, some are in odd positions etc.

I think it ads a little personality when they’re not perfect.

LifeColor - concur. Like them best of all the current acrylics I’ve tried.

Spent the last few sessions at the bench working on stowage for the front fenders. I like making my own stuff when I can, resin stowage is really nice but then everyone’s model looks alike in that aspect. With a little practice and some stuff around the house, stowage can be pretty easy.

I soaked some old gauze from the first aid isle at the drug store in a bottle of Tamiya paint, squeezed it out and spread it open to dry. 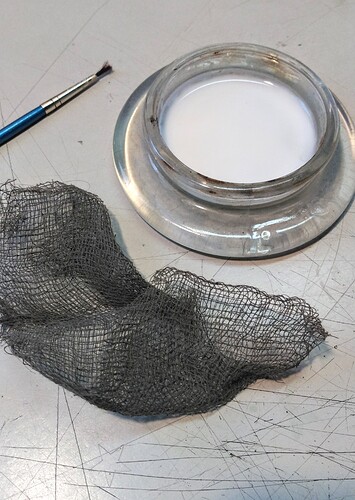 With some elmer’s glue thinned heavily with water, I make a rolled camo net and soak it with the glue mix. I then cut some very thin lead foil from a bottle out of the liquor cabinet. 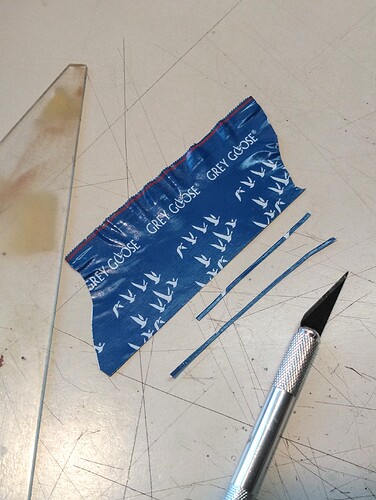 These thin strips are used to represent the straps that hold it to the fender. I simply wrap one piece and attach a second on top to hang naturally. I’ll use a photo etch buckle at the point where they join. 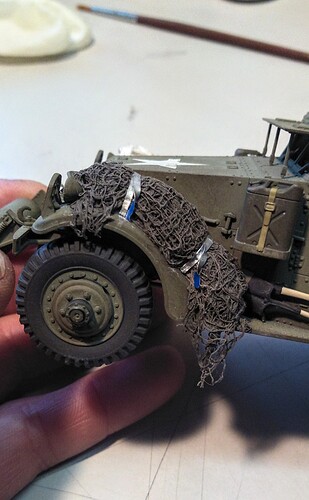 For the other fender I use some of the tissue paper you get in gift bags, or with a fancy shirt. I layer this on itself many, many times to build up thicknesses. Then I roll it into a rough shape and then brush on the glue mix until it’s pretty well soaked in.

Same lead strips for straps and it’s just shaped to the fender while wet and allowed to dry. 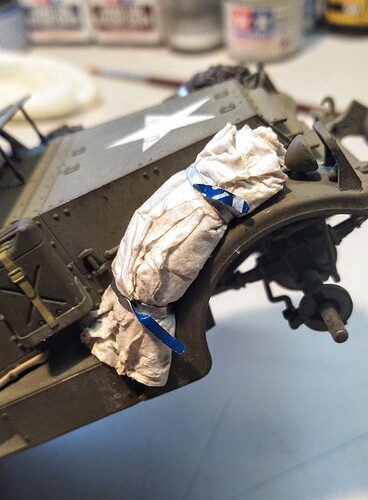 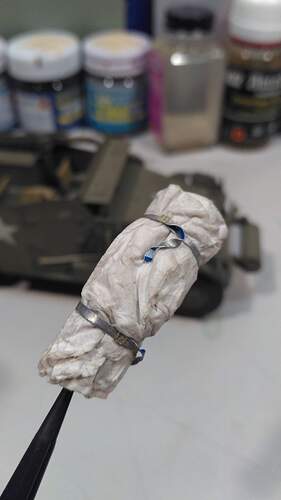 Mr. Metal primer for the lead straps to help the acrylic paint stick. 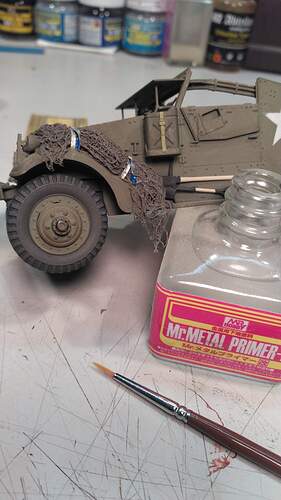 And what it all looks like now. I still have to paint the buckles but that’ll come with final detail painting. 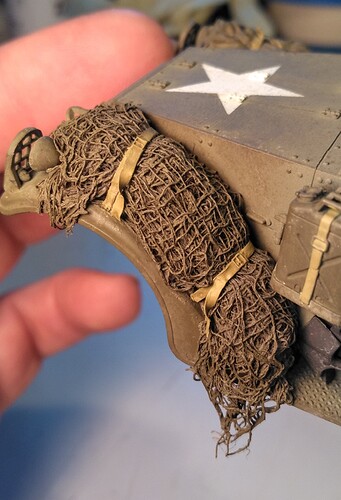 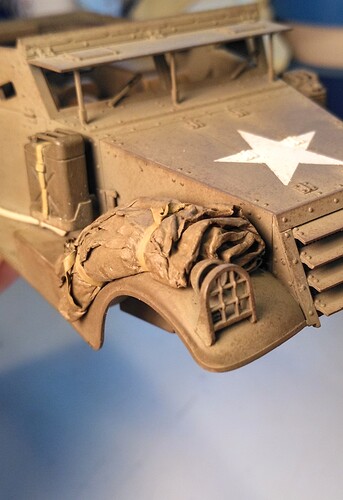 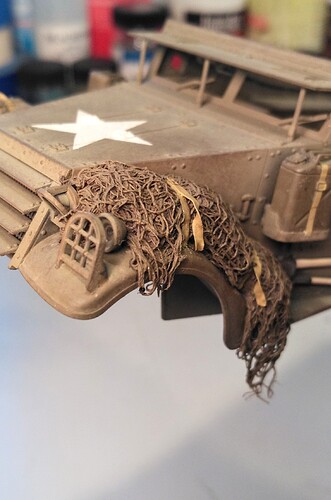 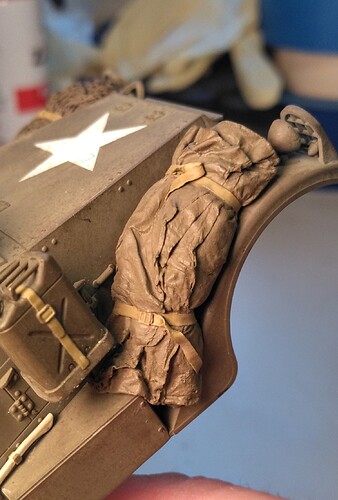 Maybe I’ll have some weathering done come next update.

Really nice work on the stowage Ken! I enjoy it when a modeler creates his own. A few extra steps and you have custom stowage that’s more detailed, rather than buying the pre-packaged stuff. It shows more creativity, too. The little buckles are a nice touch.

Been a while since I checked out this topic, your scout car is looking real nice. After reading through your first post I started looking for LIFECOLOR paints but they only (as far as I could find) come in pre-arranged sets no individual bottles, seems odd but I’ll keep looking. I usually use lead foil from wine bottles for straps myself but I’m a cheap bastard and have never gotten a fret of pe buckles so the realism is lacking. Speaking of this, I was making straps yesterday for a build I’m working on and was wishing someone would make a tool with a wheel the width of a web belt that would cut the outter edges and sandwiched between those another barrel that would emboss the texture of the webbing and the grommets evenly spaced the length of the material. Ah the simple dreams of a simple man .

@agincajun Terry, Scalehobbyist carries the Lifecolor line in individual bottles along with the sets. Their service is first rate and their shipping is very inexpensive. I’ve been using them for years and recommend them. Lifecolor paints shoot beautifully through the airbrush and dry to a tight thin skin on the model. You’ll be amazed how well the detail stands out. It also brush paints excellently with outstanding coverage, usually only needing 1 or 2 coats. The paints come in 22ml bottles so you get a lot of paint for the money. Their color range is fantastic and extensive. After 52 years I bought the entire line and now Lifecolor is all I use. The sets are really great, too.

Awesummm! That’s just crazy man! I don’t even remember which site I went to but strange enough I didn’t check SH. I REALLY like their web page layout, it’s the easiest most comprehesive user friendly site I’ve used. Well cool, I’m slowly begining to transition over to acryl paints but I’m learning that Mig doesn’t drybrush well at all (seems like you addressed that in another post?).

Yeah, in my testing Mig paints didn’t do anything well at all!

Stowage looks great - indeed much better than resin .
I’m curious - did you have to drain the bottle before taking the foil ? LOL

Fantastic work on the OD finish. The stowage has turned out great.