Here’s what I’ve been working on for the last two weeks. It’s tamiya’s T-62 offering, it wasn’t a bad kit to build and went together quite well. I painted it using ammo Mig primer black, then went over that with ammo Mig brown oxide primer. The next coat I did was Vallejo Air steel on the storage boxes, handles and some select surfaces. After giving it two coats of hairspray I finished it off using Ammo Migs Zashchitniy Zeleno. The chipping came out quite well in my opinion , after chipping i went into weathering. Thanks for looking and critiques are welcome. I’m hoping to do a diorama with this in the coming month. 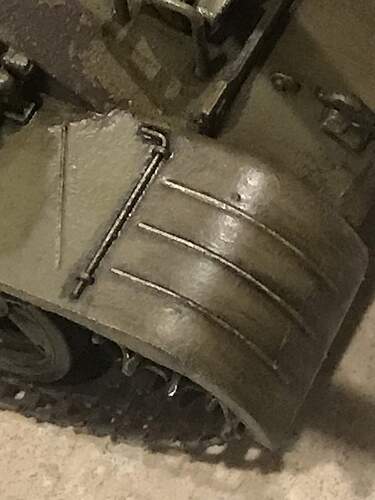 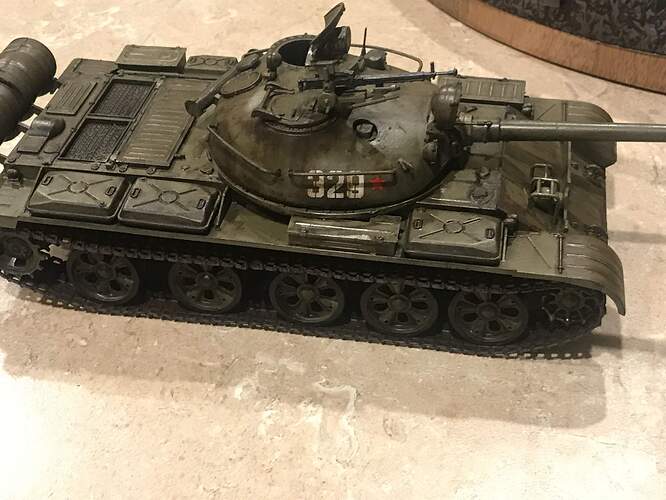 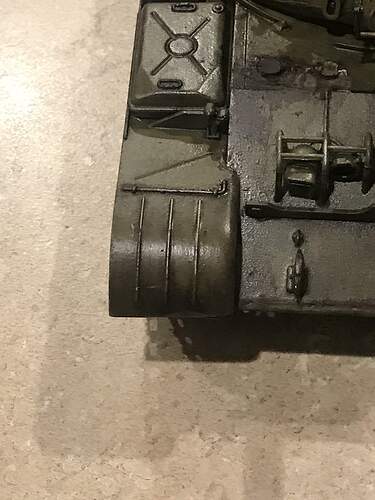 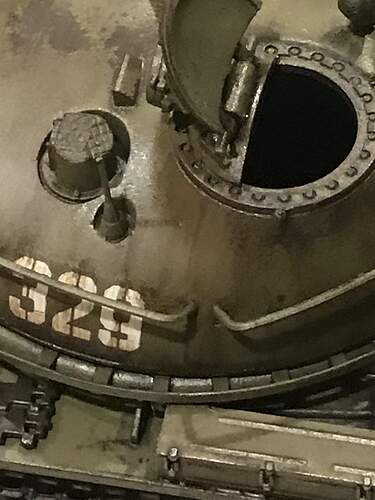 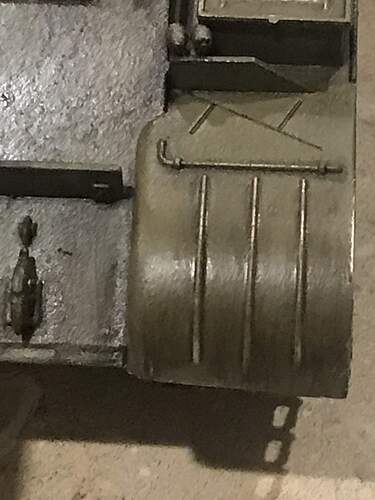 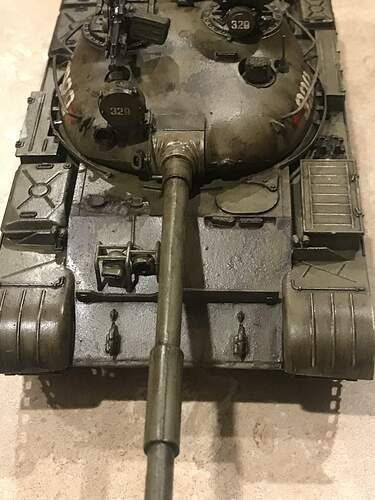 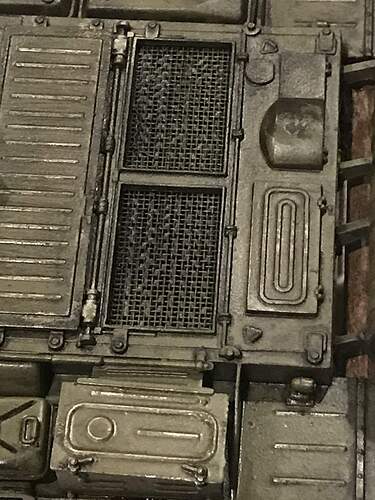 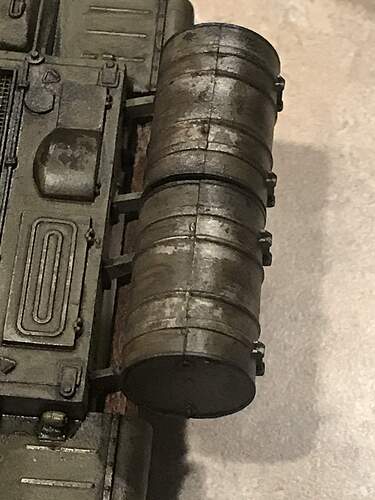 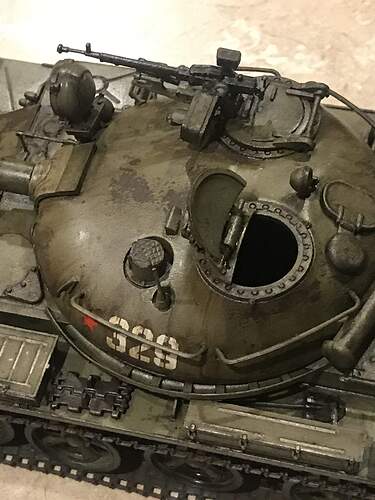 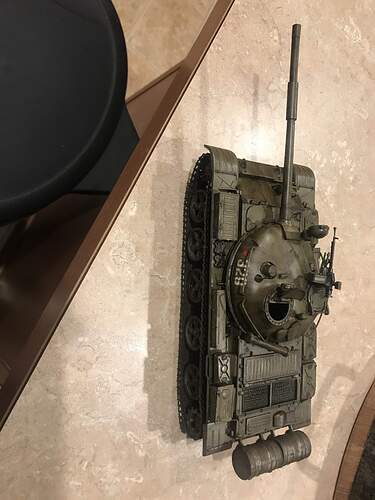 It looks very good to me! The chipping is very nice!

@Panzer_modeler thank you, it came out Bette then i expected. I was going for a used look, my hope is to make a diorama showing tank riders in maneuvers or to show a “category B or C “ reservist unit going into battle for a what if diorma.

Looking forward to it!

The old Tamiya T-62 still has some life in her! That turned out nice enough.

IIRC, the T-62s role in Soviet doctrine was for it to “shoot in” the more numerous T-54/T-55 elements, using its longer ranged, more accurate gun from an overwatch position, during deliberate attacks on a prepared defensive position.

@Stikpusher thank you for the remarks, if i remember correctly the soviets wanted to flood the fulda gap with older equipment that would cause NATO to use up its ammo then they’d unleash the newer equipment or like you said, have it mixed in.
But my inspiration from the kit comes from “Red Storm Rising” in the book and in other posts I’ve talked about them describing category B and C units which are the reservists. They never name T-62s in the book but they do talk about the Btr-60P being open topped and in use by the reservist while heading to the front. So I’m thinking that this could be feasible.

Looks very good for that old kit! Way better than the one I built years ago.
Just the fuel drums could use a little more work.

@markiii I’m happy with the fuel drums except for them having to much steel and not enough of the brown oxide. I tried to give it some grime to break up the steel on it.

Having done one myself just last year I can concur that the kit goes together without much trouble.
I like the smudgy look of this one and I think Markiii meant the very visible seams on top of the fueldrums, when he mentioned more work could be done.

@Yeahwiggie ahh, i had some troubles with the seems on them, tried using Mr. Hobby cement S to fill it. The fuel drums gave me the most trouble because of the fit and I put them on last.

Here’s two more pics from the rear. Something I’ve gotten better at in my opinion is layering paint. The log was painted with ammo Mig old wood then i added Vallejo brown to it by water doing the color and streaking it over the old wood. 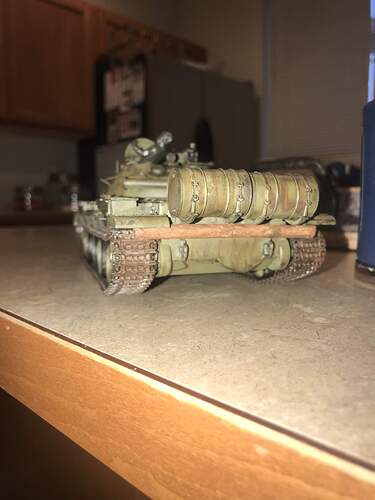 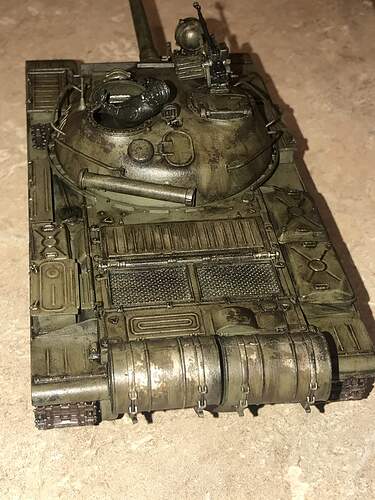 Did some work on the tank commander and I’m pretty happy with how it came out. I used ammo migs panzer crew uniform set which as awesome as it came out I had to do a lot of tinkering with even with a step by step guide. I ended using the slate grey as a base then doing ammo migs light skin tone to mix in and add highlights. I’m not great at faces but i feel like I’m making progress. I have a few more figures to finish for this diorama and then I’ll be done. 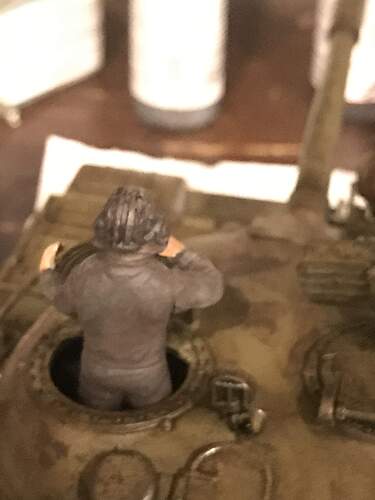 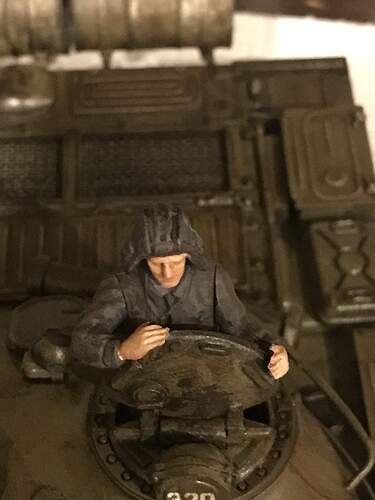 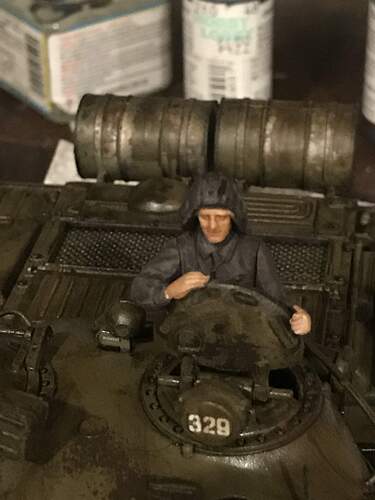 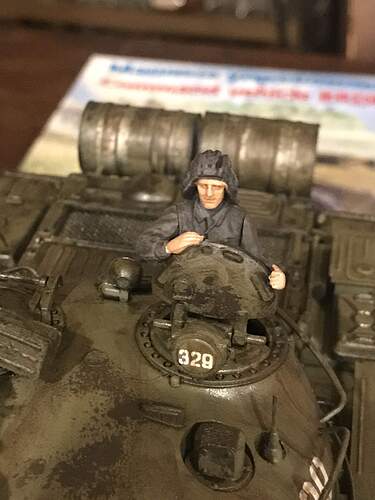 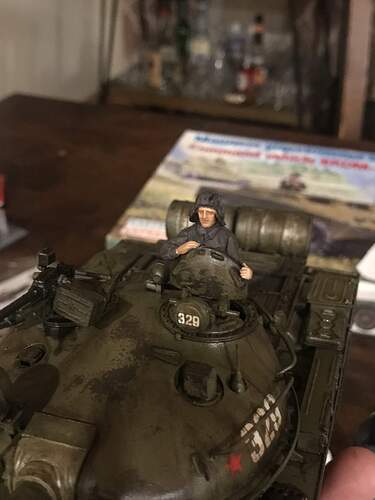 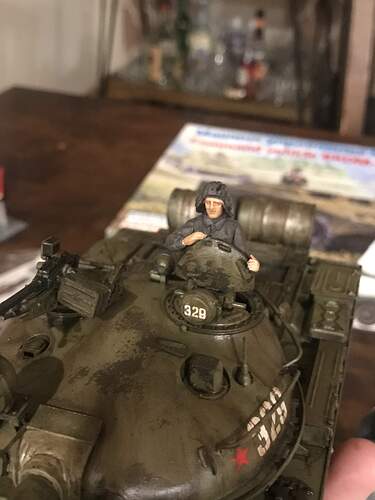 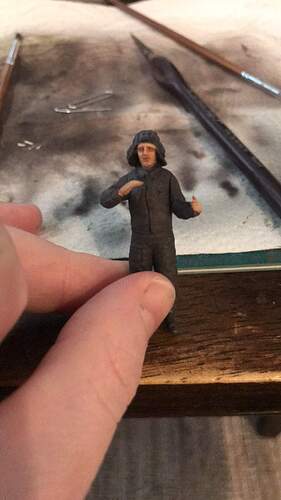 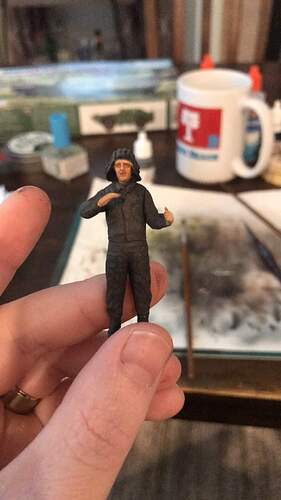 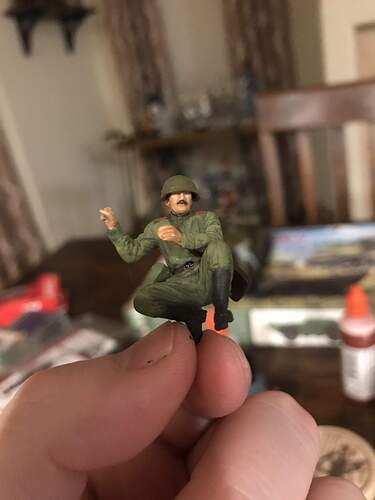 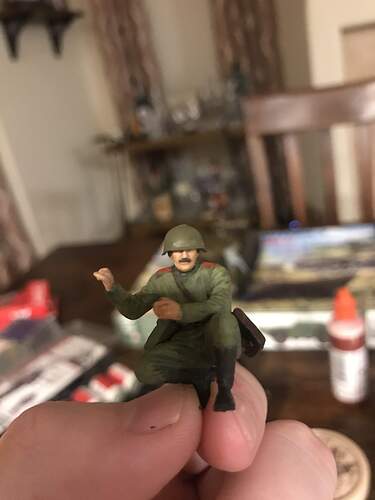 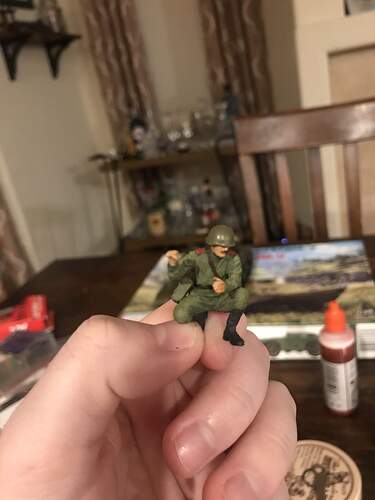 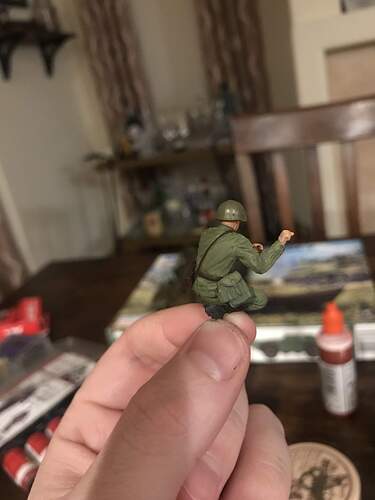 First tank rider is just about finished just needs an AK. I’m thinking of a dio with a brdm-1 and I’m also thinking of starting a new thread. What’s everyone’s thoughts?

@Panzer_modeler itll be a work in progress I’m finishing up these guys first. I’m thinking that the T-62 will be on the side of the road with the brdm driving past or halting to get them moving. 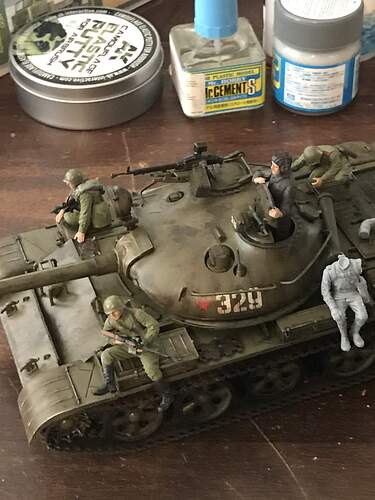 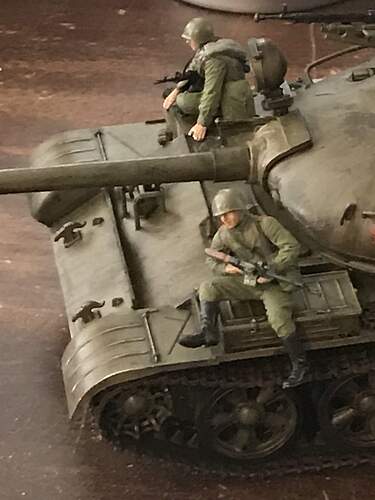 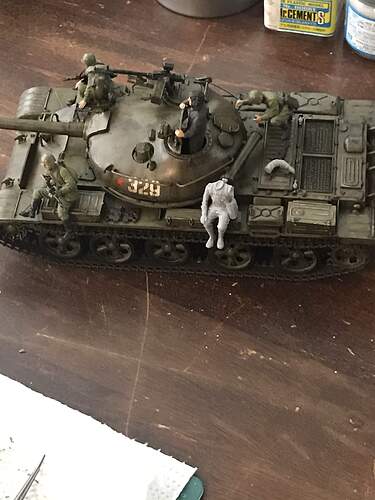 So here’s how it’s going so far. The figures aren’t in their final positions yet but this is a rough mock up of how it’ll be. I’m considering putting the soldier with the pkm on top of the turret near the search light.