Hi all, having just written the final test of my time in high school I find myself in possession of enough free time to begin one of the first builds of this summer, that being the Toyota TS050 hybrid WEC racer. 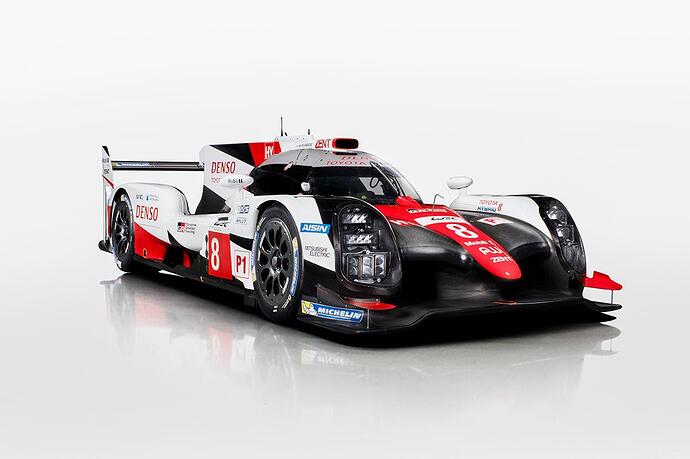 From wikipedia: The Toyota TS050 Hybrid is a sports prototype racing car developed for the 2016 Le Mans Prototype rules in the FIA World Endurance Championship. The car is the direct successor of the Toyota TS040 Hybrid, which competed in both the 2014 and 2015 FIA WEC seasons. The TS050 was revealed at the Circuit Paul Ricard on 24 March 2016 due to Toyota’s 2-year cycle policy.[1] The engine is a 2.4L twin-turbocharged petrol V6, while the two previous cars used a naturally aspirated petrol V8. It features an 8-megajoule hybrid system, which uses lithium-ion batteries.

So to summarise, it’s a Prius on some serious go-fast juice.

This amazing little car is represented by Tamiya in 1/24 scale. This is a newer (if rare) model of theirs, and I was lucky to snatch up the only one my hobby store had (mind you, that’s the only one we had for the entire country!) The kit is a bit pricier, but it’s clearly worth it. The quality is incredible, and I can tell just from looking at the sprues that this is going to be one tough build, even OOB. In a similar manner to their new McLaren Senna, the kit does away with a one piece body in favour of building up the monocoque in a manner similar to building the body of a motorcycle. 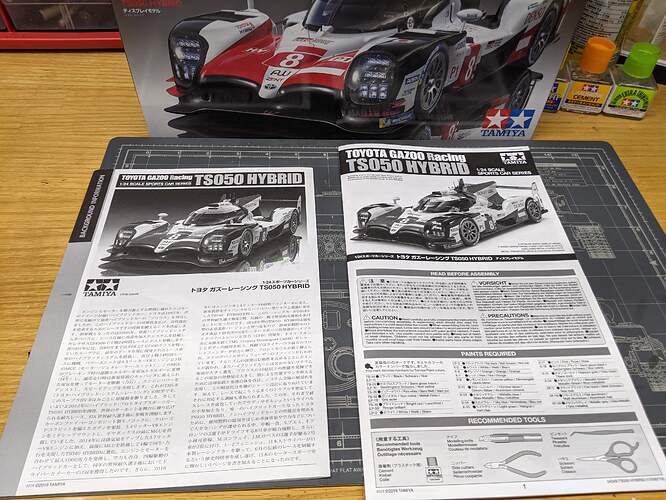 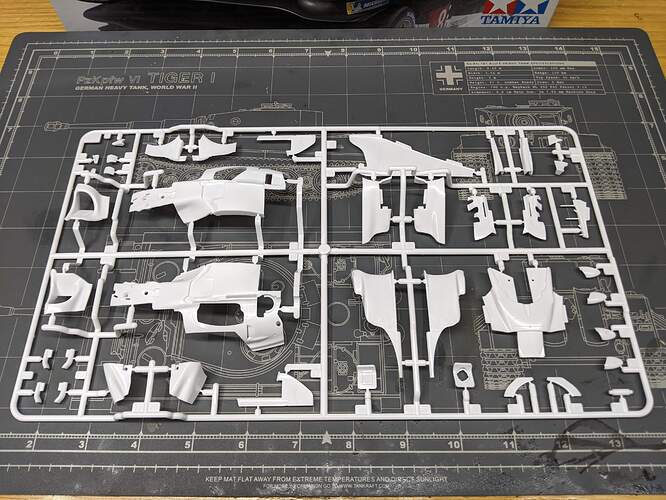 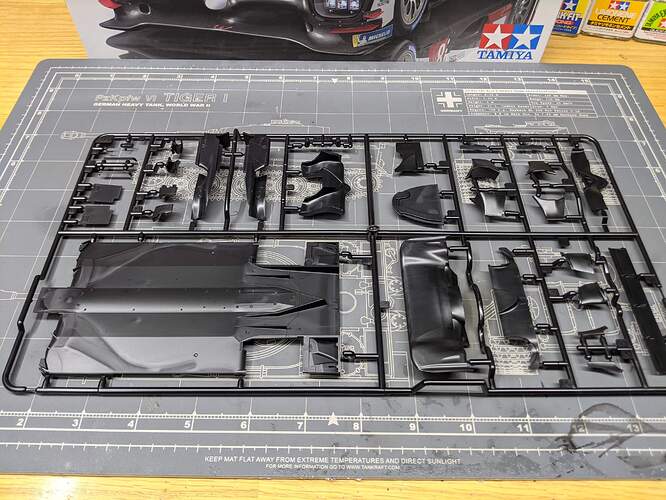 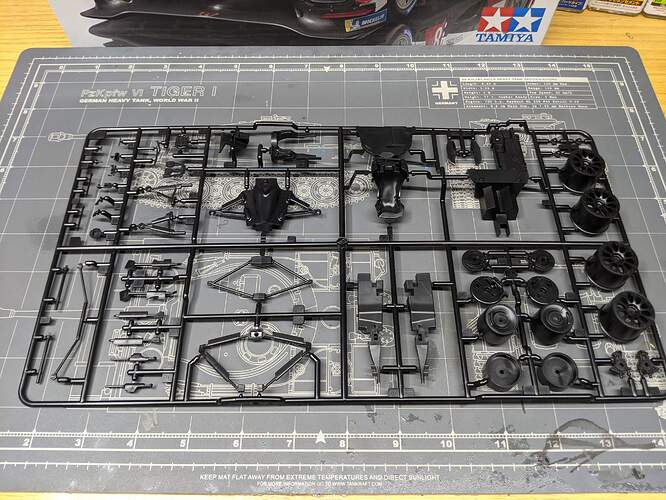 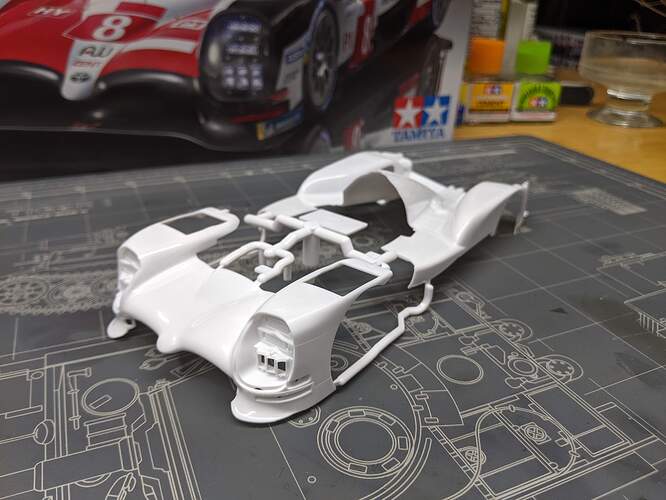 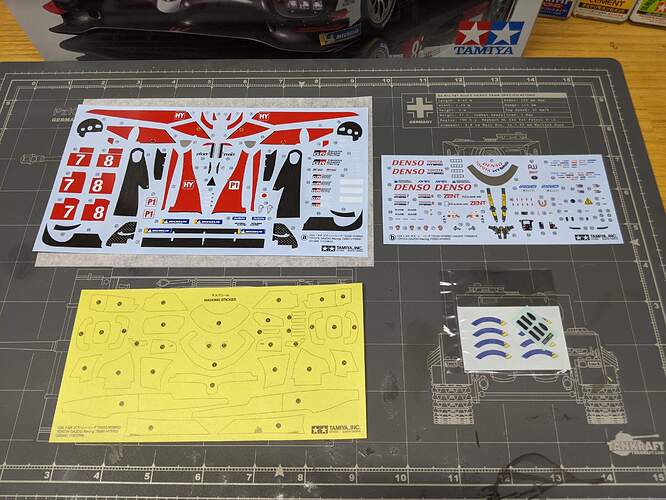 As you can see, there’s quite a bit going on with this kit. It definitely won’t be a speed build like my Ninja! I’m going to take my time with this one. I’ll also try to be better at posting updates.

See you guys in the thread,
Dennis

I’ve thought about getting this one myself as it looks more complex than your average car kit!

And right off the bat, Tamiya has you masking! With such a complex paint scheme, it’ll take a good deal of consideration to paint the body panels correctly. Worst case scenario I make a custom paint job 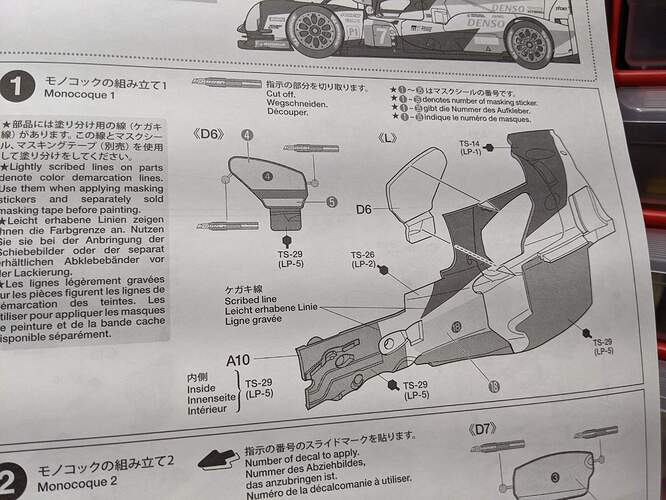 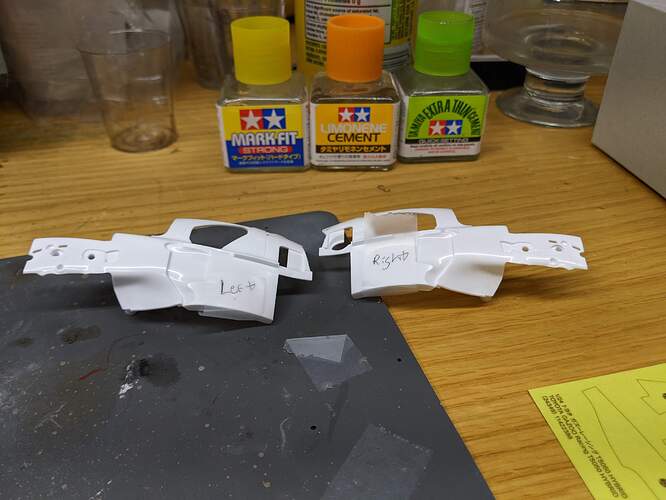 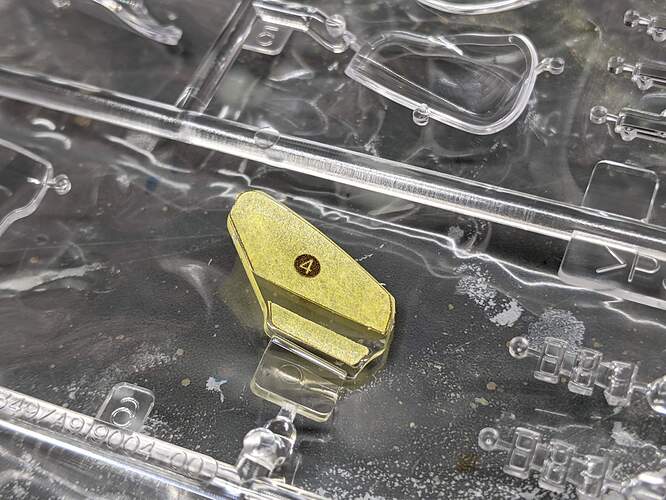 As you can see, I’m masking the clear parts on the sprue to avoid any mix-ups. The monocoque halves are going to be masked as well.

That’s all for this morning! Be back soon

Oh yeah and one more thing: 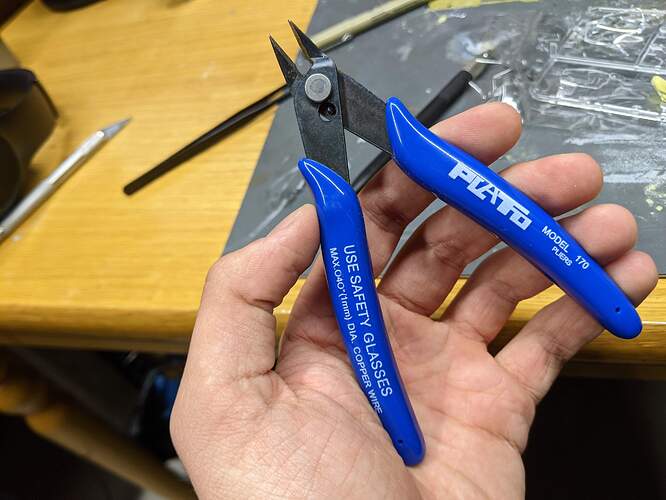 I’m trying out some new sprue cutters for this build!

Looks a fascinating kit, gonna watch with interest as you go along

Time for this morning’s progress update.

Painting the monocoque body panels has ground to a halt, as I am without sufficient white paint! Drat. Alas, I have still been productive, and I’m working on interior components. Overall, I’m enjoying this build, as the interior has been represented well. 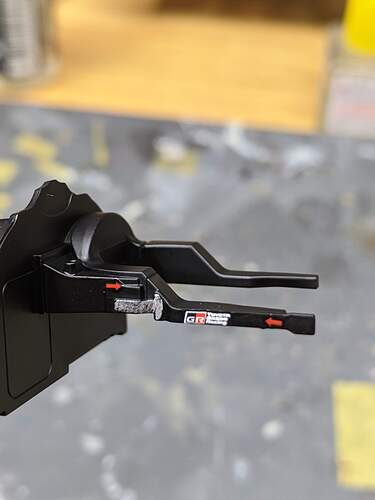 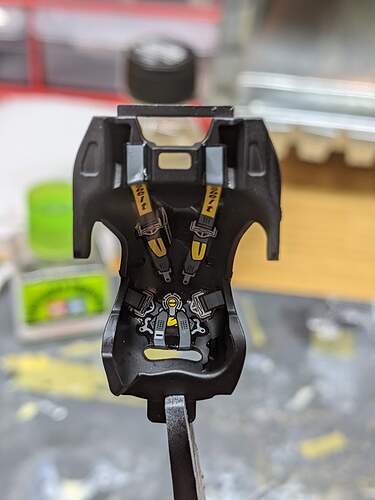 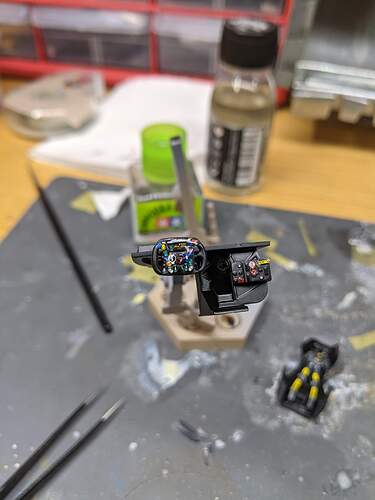 Great looking details Dennis, this office is going to really pop once it all comes together!

Dennis,
Just a great choice as I’ve procrastinated about buying either the TS020 or the TS020. For me it’s the paint scheme that I’m on the fence about.

Great start to what looks like a rather complicated Tamiya quality build. I’m assuming that the multi pc body is because the full body is just to complex to mold in one piece.

I’m looking forward to following every update till you cross the finish line.

The body is certainly a subject of interest in this kit. TS050s have a very distinctive form, almost as though they were enlarged go-karts with a covered cockpit. While it looks striking, there is simply too much going on to mould a one piece body that could be properly painted. Each body panel, as it is, requires some exacting masking, and it’s surely the most complex kit from that perspective on the market.

That is a super dynamic looking kit .

Yeah, you know what? Custom paint scheme (potentially). It’ll look cooler, and it’s more my style when it comes to making models. I’m thinking perhaps an orange or yellow car, but I’m still mulling things over in my head.

(The masking has been that painful)

So I’m sure that the fit will be Tamiya’s usual perfect as you build the TS050.

Time for another update - this time, with the cockpit finished. 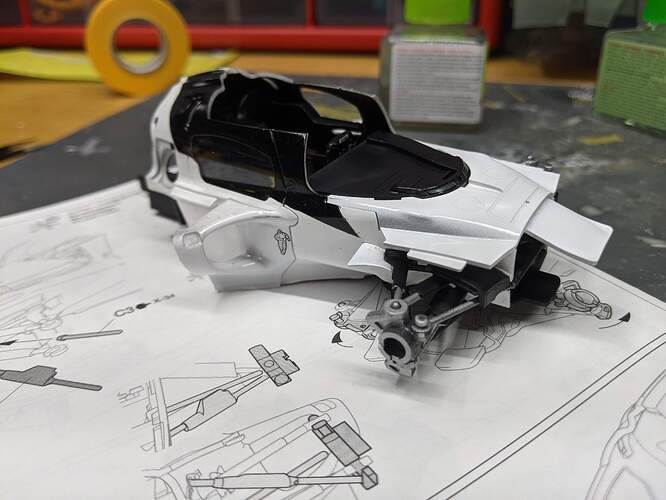 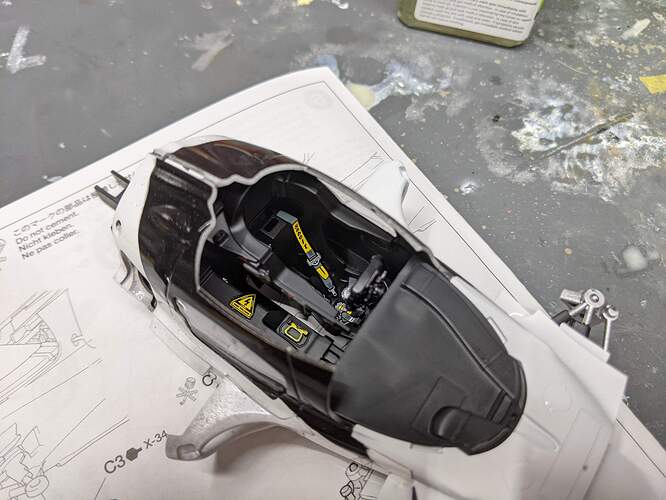 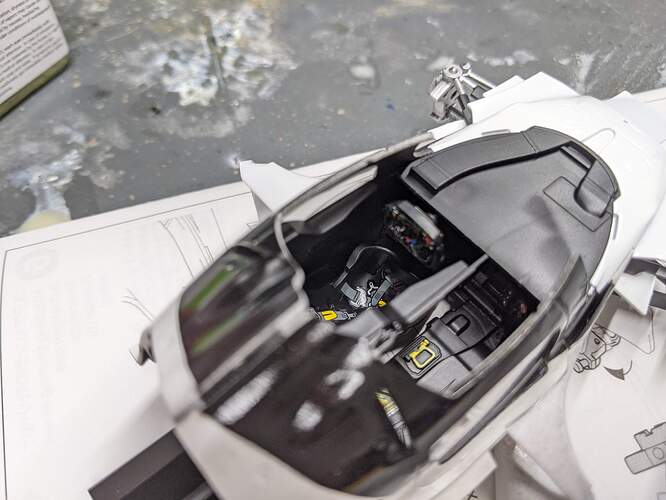 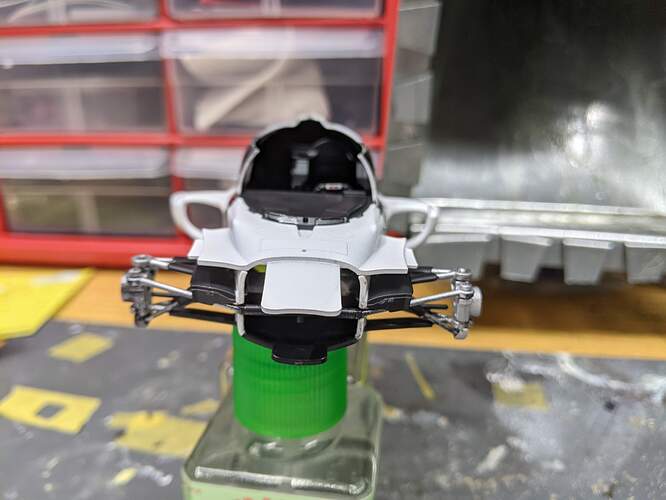 After stripping and re-masking those pesky body panels, I repainted the body and began assembling the cockpit. Now, the front steering is done as well. Things are picking up!

That is just pretty

Very nice! You could post this in the Sci Fi forum as the cockpit for a space fighter.

It’s 1:22 am here in Canada, and after two cups of coffee and three runs of “Night Lovell Hardest Tracks”, I have a finished model of the TS050 in front of me. I won’t lie, this model definitely kicked my butt! The multi piece body definitely was hard to work with, but in the end I’d say it turned out alright! I would definitely recommend this kit, but only to people who have more experience building cars than I have

Thanks for following my updates! 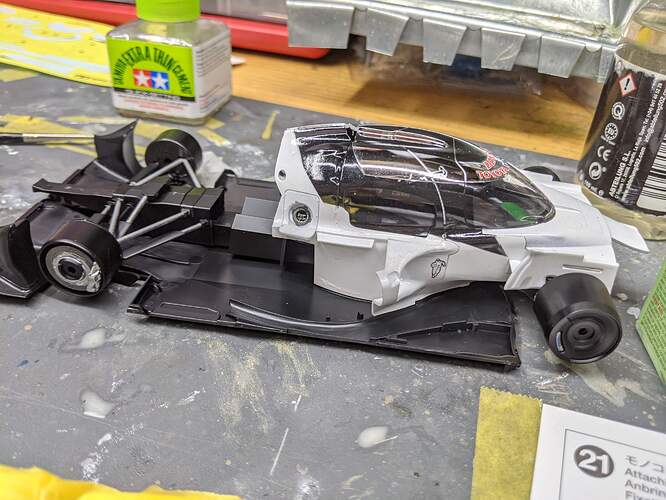 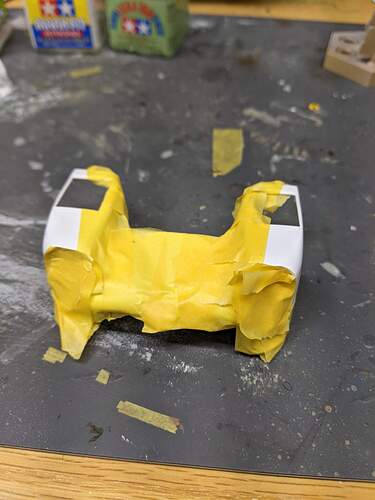 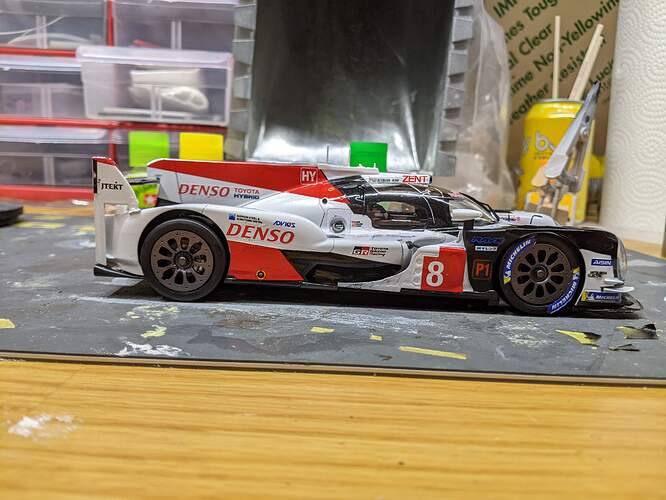 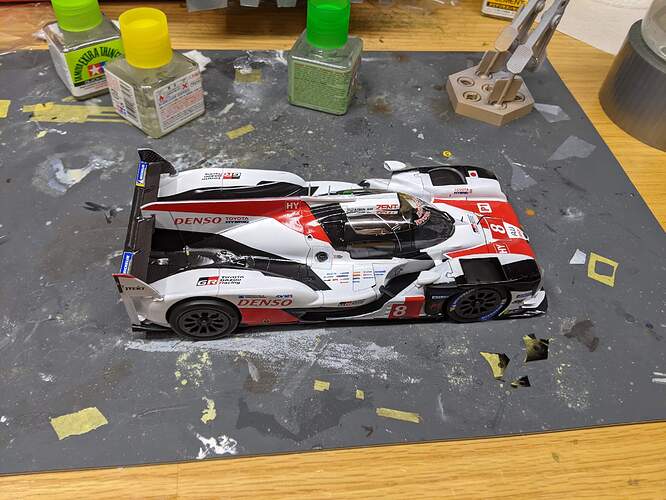 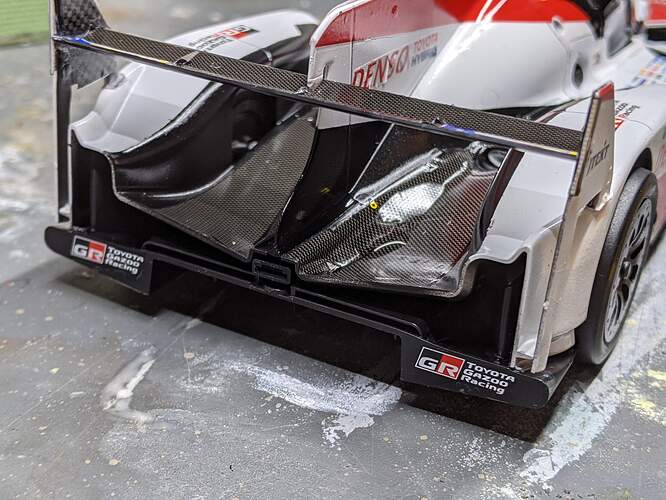 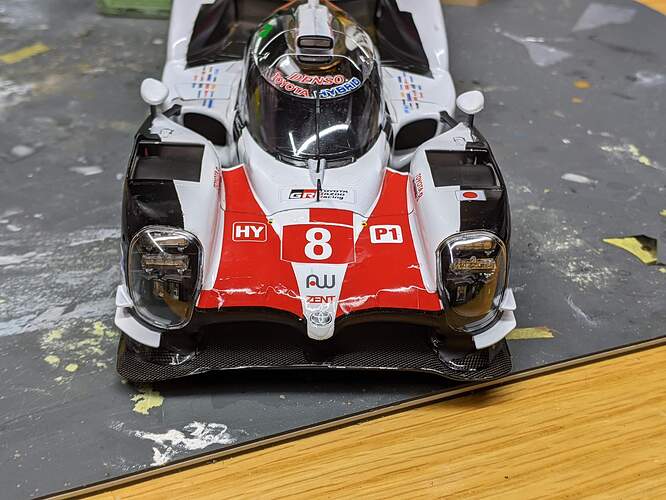 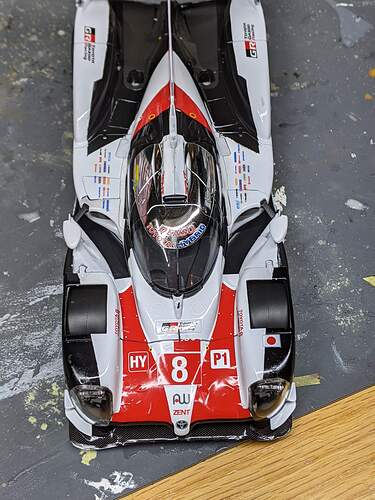 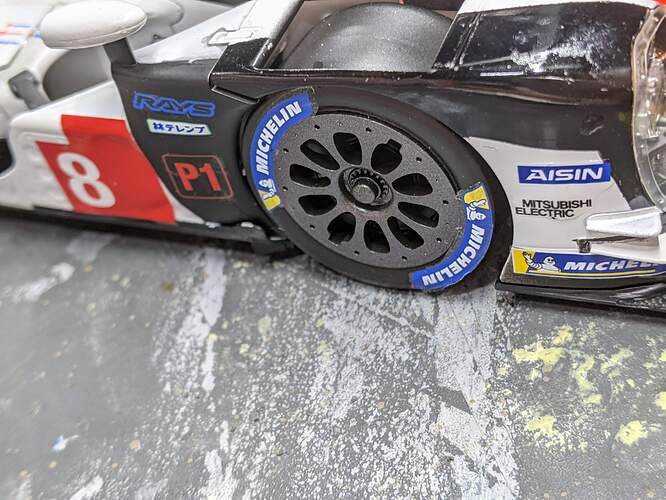 Congratulations on a great finish to a difficult kit!

Thanks! I have to say, it’s definitely a Tamiya kit because I’m sure, had the instructions not been so clear and so much of the work already been done by the manufacturer (IE if this was a Revell kit

) it may have gone to the shelf of doom.

That is just a sexy looking beast of a car

The openings to allow the driver to see the condition of his front tires is interesting.