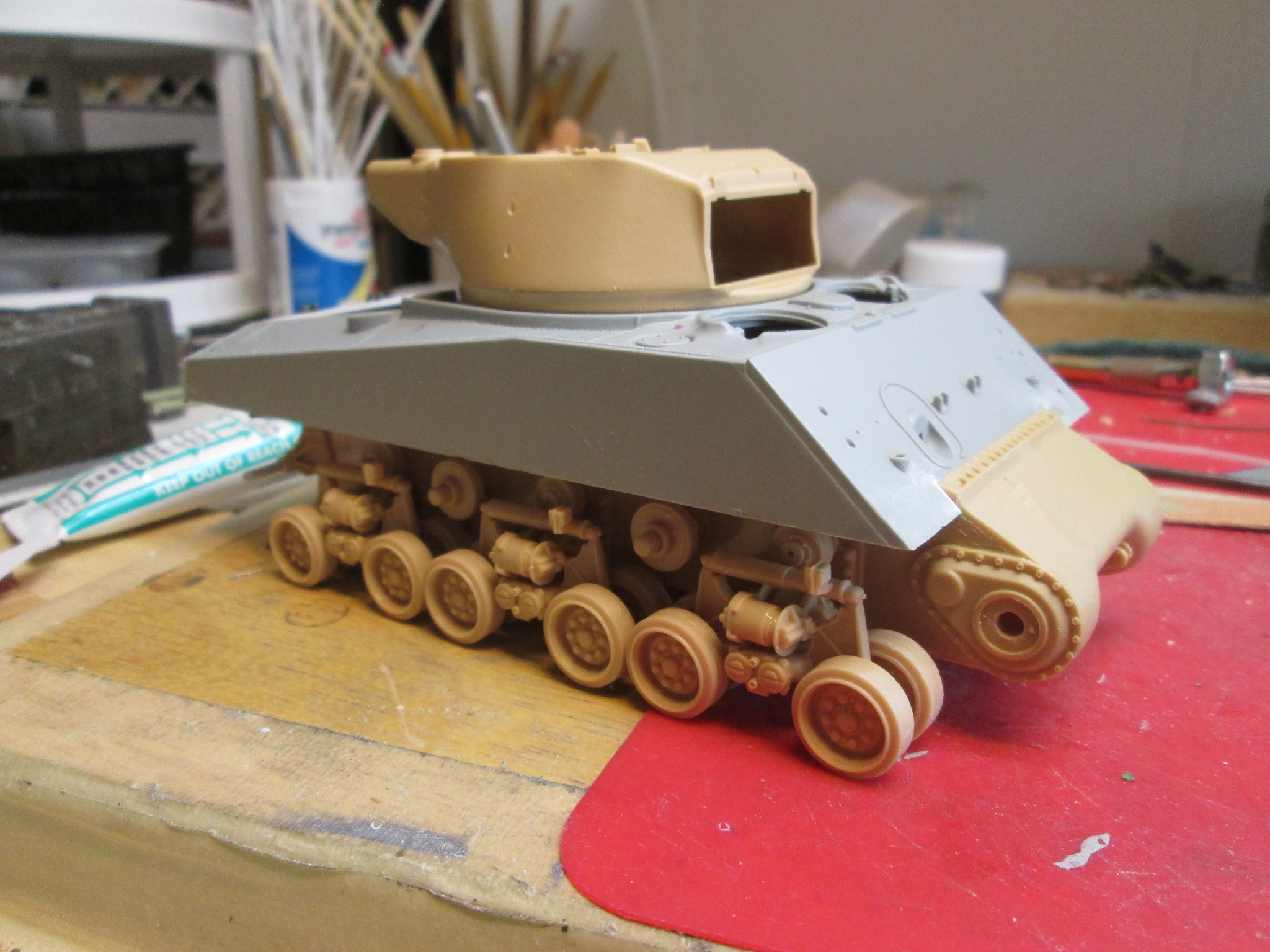 IMG_4141 by Russel Baer, on Flickr
It looks like it works…
Pic is a start on a welded hull M4A3-based M51, one of the 40 or so done. Turret is Tamiya, upper hull is Dragon and lower hull and running gear is Academy.

How well did the three different kits sections mate up?

Surprisingly well. I added a couple of .020" shims to the bottom of the glacis to close a gap against the final drive bolt housing part, and filled some gaps in the sponsons with scrap card, but otherwise it was a quick job to mate the hulls. I just opened the turret ring hole to fit the Tamiya turret to the Dragon hull. The only “issue” is the distance from the top of the return rollers to the sponsons. It’s too tight to fit Tamiya tracks and the Academy tracks have been tossed, so I have some Kaizen tracks on the way, hoping they’ll fit in there. I looked for some of the Dragon DS tracks but no luck. In retrospect, it would have been a lot smarter to simply use two Tamiya kits, the late M4A3E8 and the M51, but I’m tired of moving all these boxes of parts around so I thought I’d use what I could.

Thanks Anthony. Got the kaizen tracks, after 90 minutes and two links assembled, I’m done. Going to the buy/sell/trade board.
Edit: So, another 90 minutes, a set of Tamiya tracks from their Korean War Sherman (that have shallower chevrons; apparently Tamiya changed them up from the M-51 kits) and I’ve got the rear hull and engine cover moving along nicely, just using up parts. For instance, for the air intake covers, I took an Italeri M4A1 cover and cut it in half, just like the IDF did. Kudos to Tamiya here, their M-51 kit covers have the proper reinforcements inside the covers. Academy, MP and Dragon do not.
Pics: 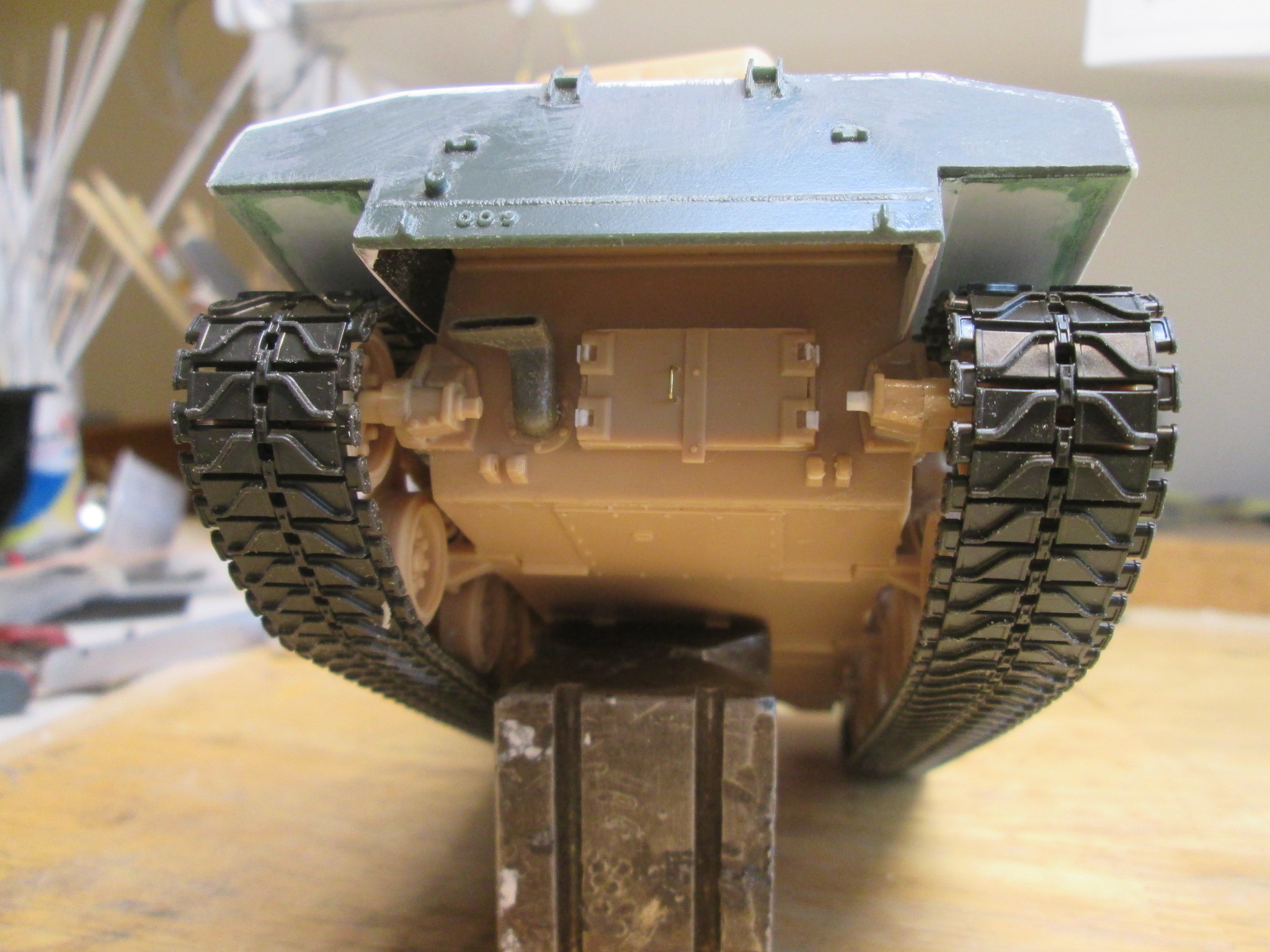 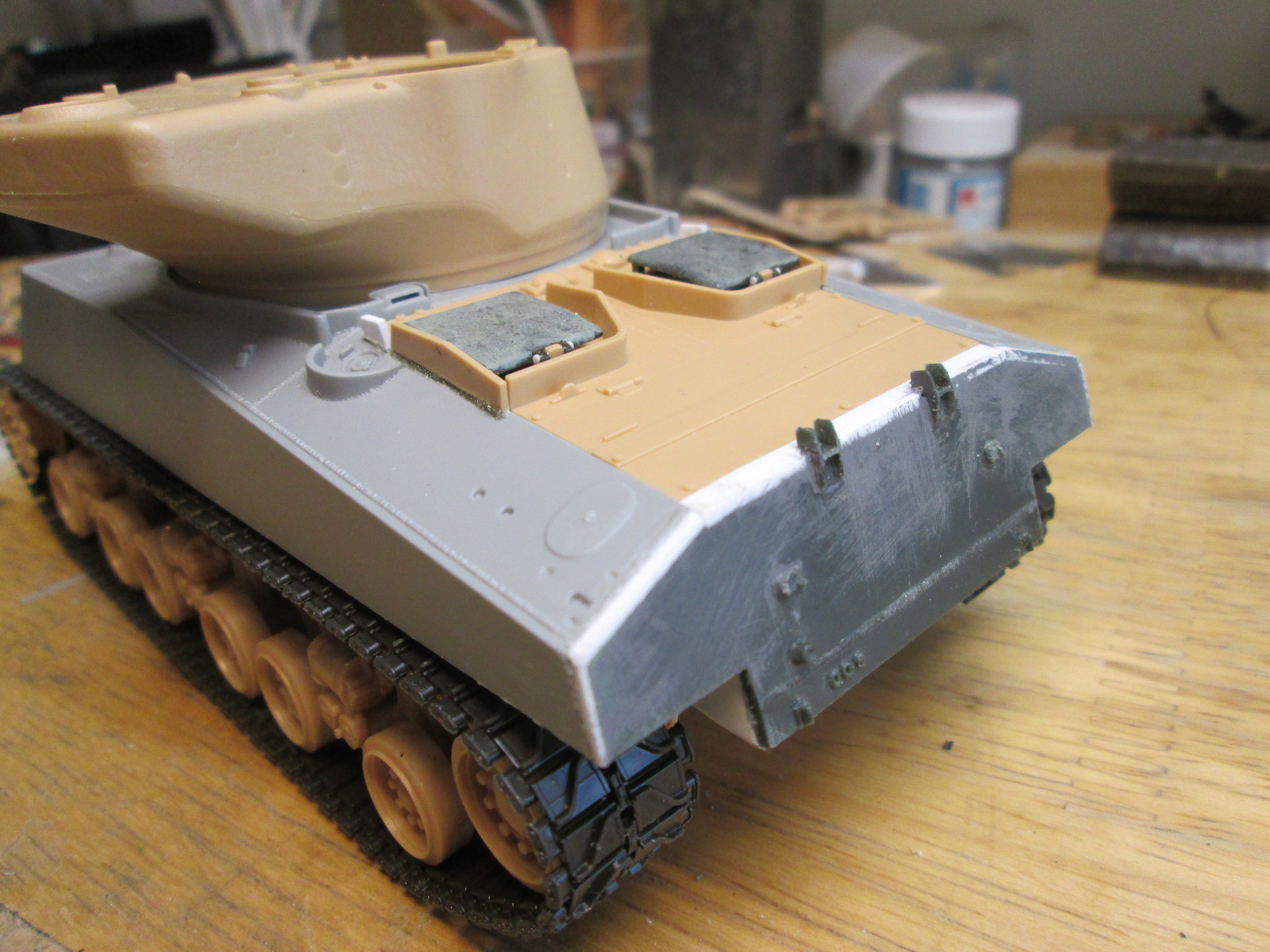 This thing is almost flying together (so far). Today I put the fenders on, trimmed off a Tamiya M-51 hull, and started the hull side stowage stuff, parts from Academy and Dragon. Also started is the mantlet. I had to re-do some turret texturing after blending the seam, no biggie. 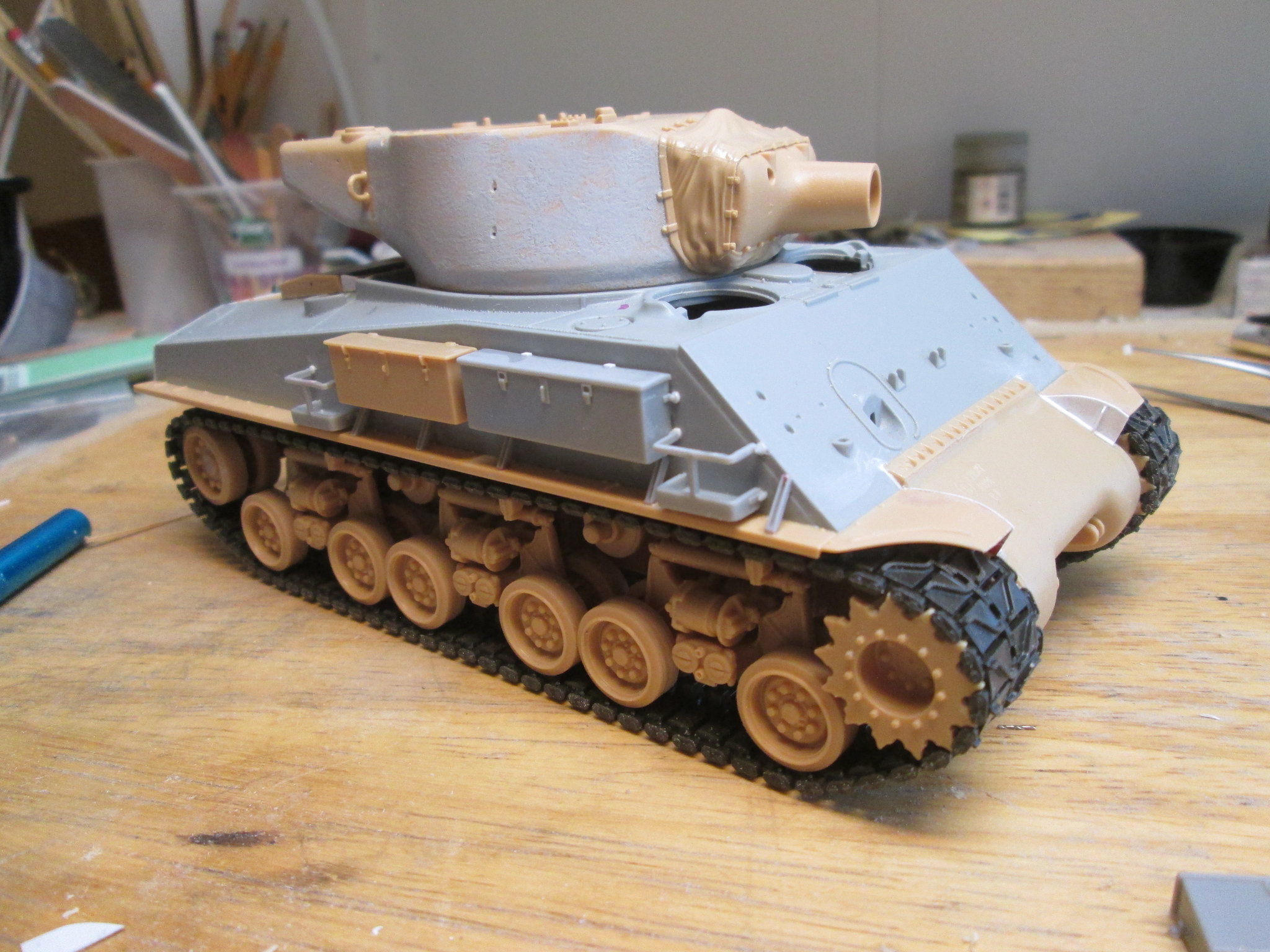 As kit manufacturers become more accurate in their kits, the closer they become to having interchangeable parts. Makes kit bashing easier. Your kit is looking good I looks like it came as one kit so far.

It’s helping. If it weren’t for the different color parts…
I got a start on the left hull side, and did the engine deck, using the correct parts for a batch 3 tank, and got to try some 3D printed jerry can brackets too. they’re very nice, very fragile. I would have preferred to use all the same, either 3D from Shapeways (Ranch Hand?) or Dragon, but I don’t have enough of either to do the whole model, so the right side is Dragon plastic, left and rear will be printed. 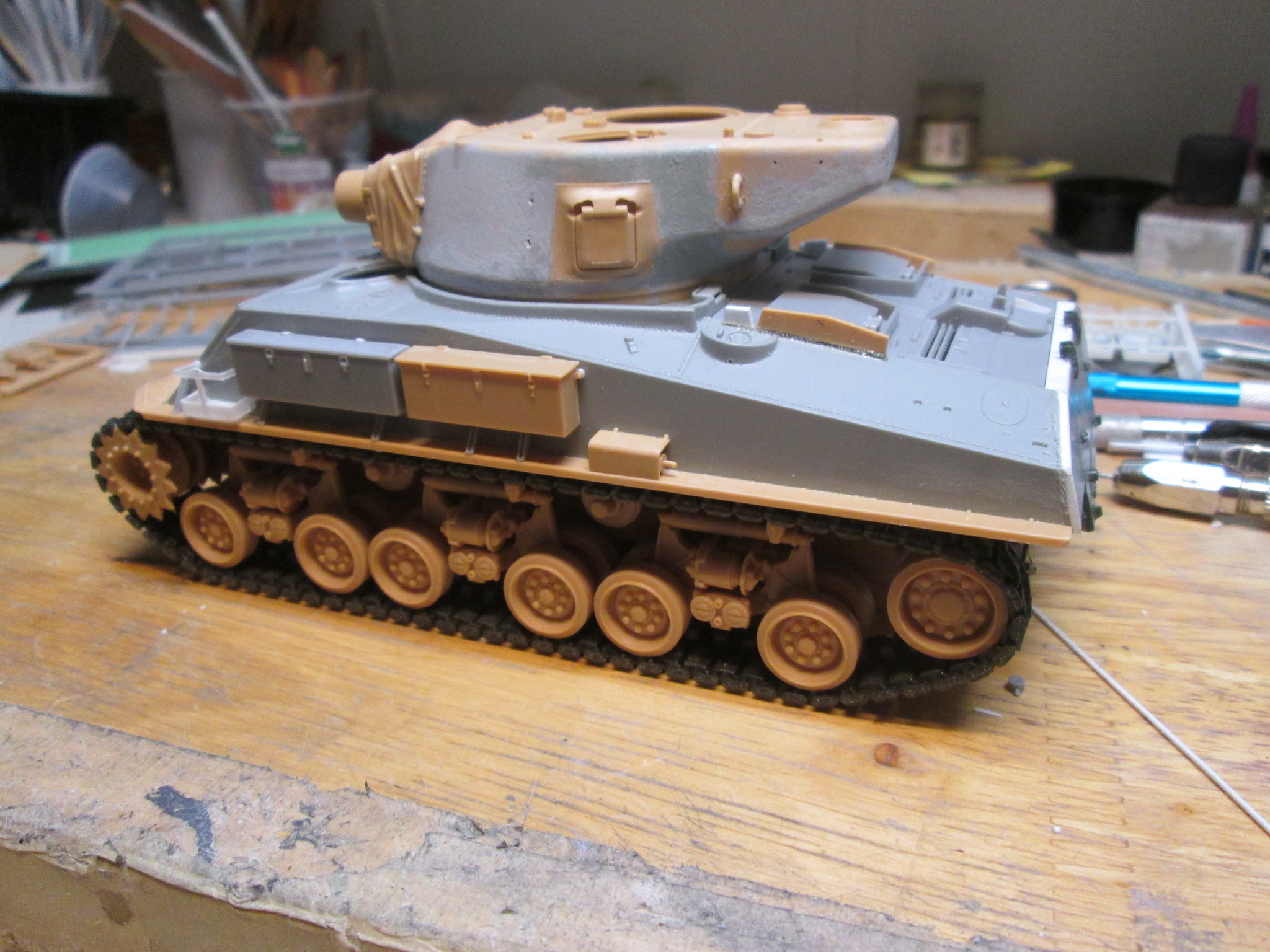 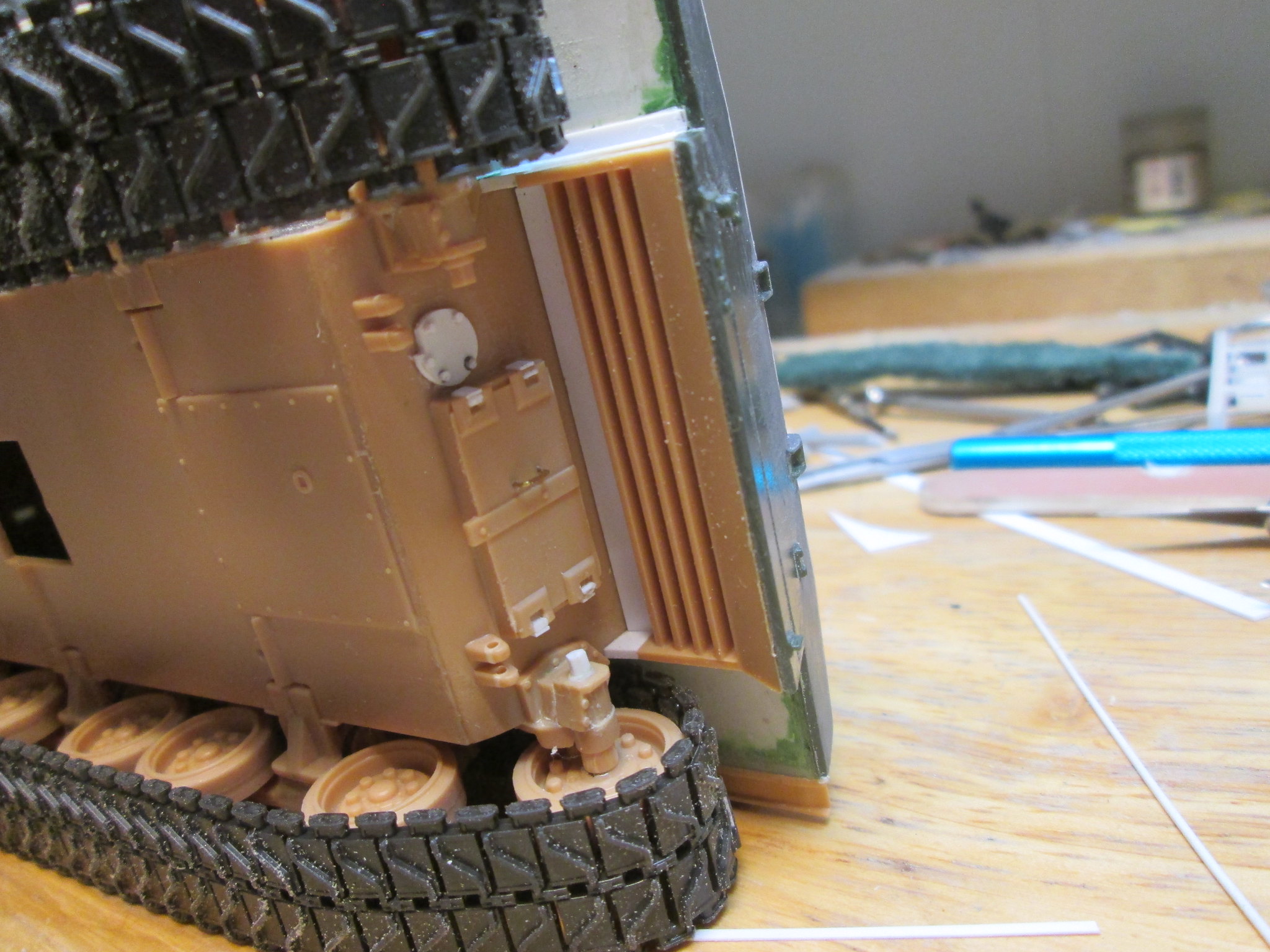 I got sidetracked: every time I dug into my Sherman parts stash to find a needed doohickie for the M51, I ran into stuff I’ve been squirrelling away for a planned M50 build, including a half-built Dragon M4A4 hull and some MP Models stuff, including a nearly complete M50 kit. Knowing better, I just decided to “organize” the M50 stuff, which of course meant proceeding with the builds, which took me here: 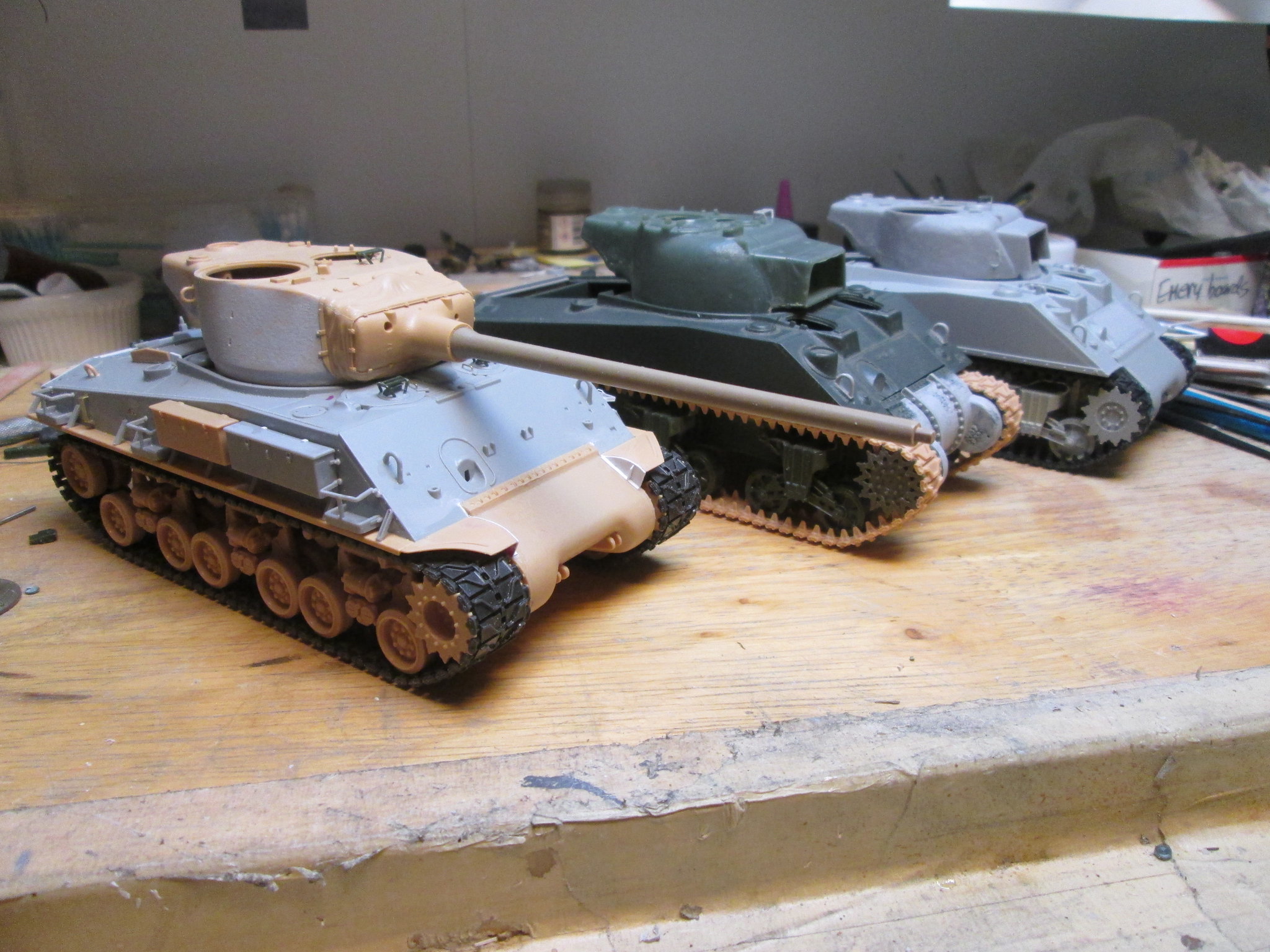 IMG_4321 by Russel Baer, on Flickr
The good news is that now when I’m rooting around for an M51 part and I find something M50, I can stick it on instead of putting it somewhere “safe”, where I’ll forget all about it. And, believe it or not, the M51 build is actually progressing a little faster too. One more thing: I’m still surprised at how good the basic MP Models parts are. The detail parts and HVSS suspension are a little rough, but the hull and turret are quite good, whereas the old Dragon M4A4 hull is not. I used Academy VVSS bogies on the MP hull, easily done, with Tasca idlers and drive sprockets, and I’m actually quite happy about how it’s going.

Working on it… “work” got real busy all of a sudden, no modeling time to speak of, but I have gotten the engine decks in and the exhaust and radiator covers in the two M50’s. 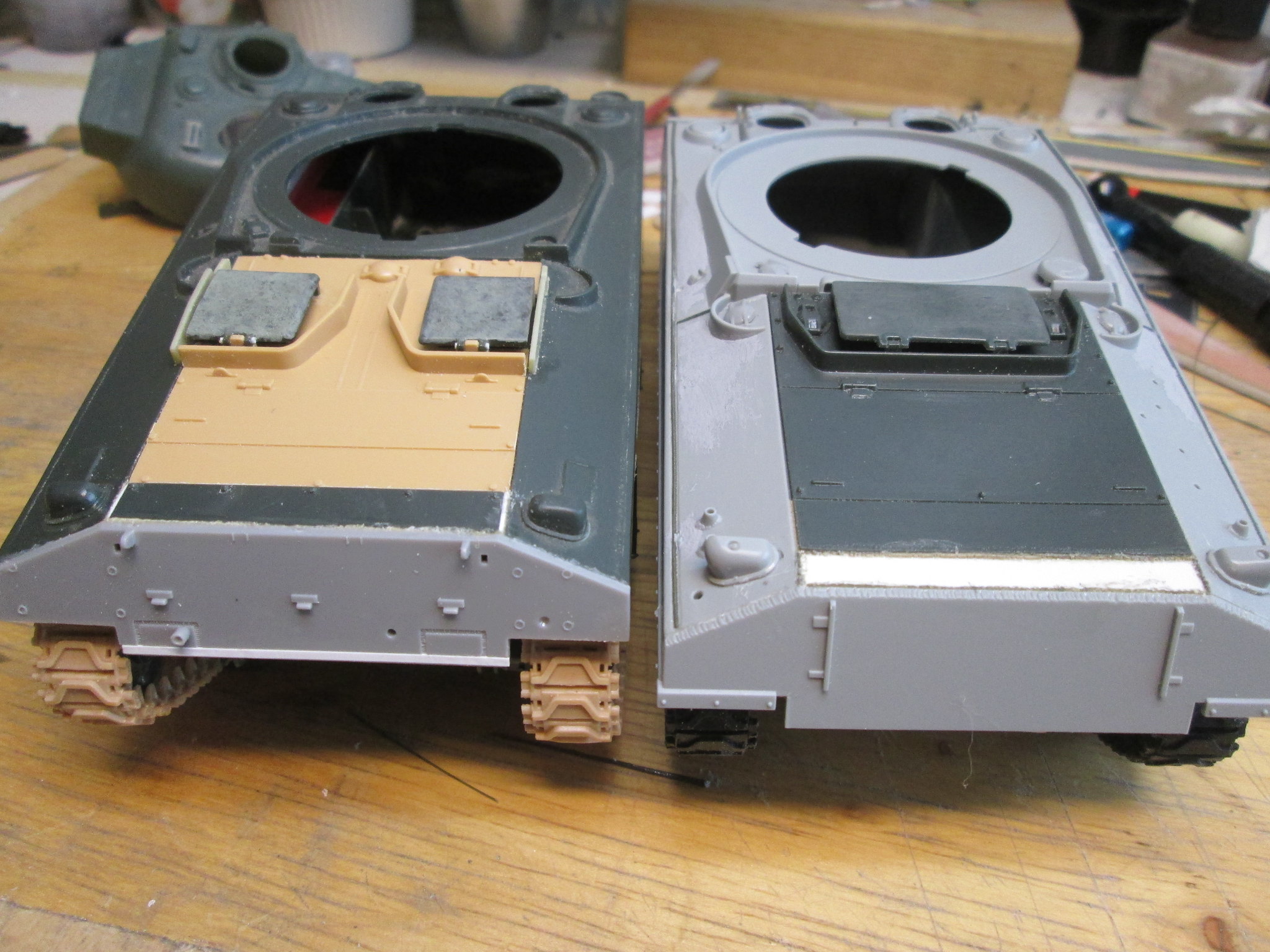 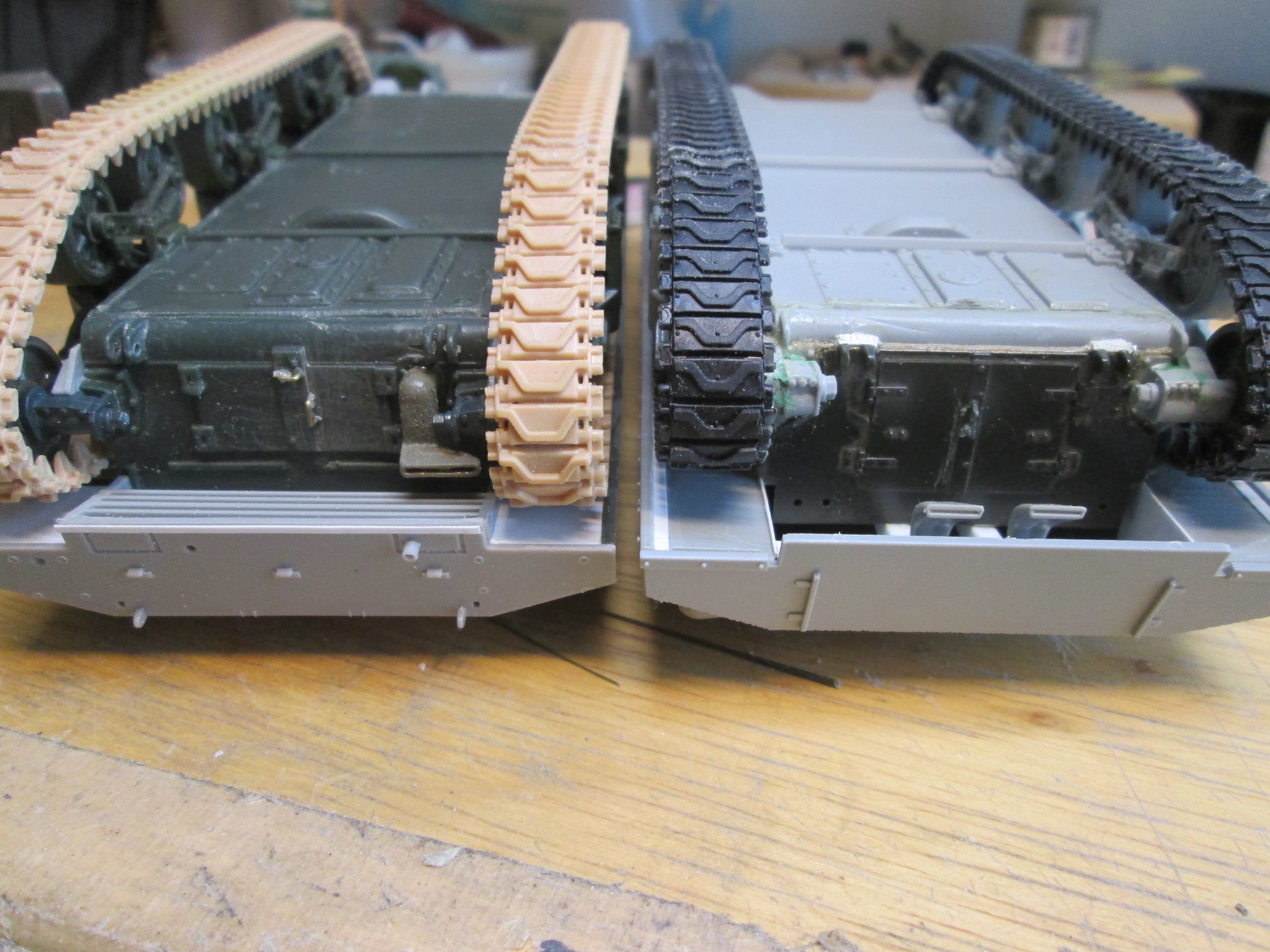 IMG_4562 by Russel Baer, on Flickr
I did decide to do the Dragon model as a very early M50, on the M4A4T hull. The rear hull floor will need to be redone, that’s next. The MP model will be one of the early Cummins powered M50’s. I’ll need to research how each was stowed and equipped, but I have the first IDF Sherman book from Tom Gannon and a couple of other pics here and there, so I’m good to go for a while.

Just in case anybody wonders why Russel didn’t use his Kaizen tracks: he’s simply not a masochist, I think.
I had a set of T80 tracks from them for my Tamiya M40 SPG, and I actually finished them - but I’ll never do that again! Imagine: 9 (NINE) parts per link. Unsurpassed detail fidelity, but at what an amount of work/time.
For details, see my build report here:

Exactly! I like Friuls, AFV Club and such, but life’s too short.

It’s long been said that the old MP parts are still as accurate as anytihng newer and is better than most of the newer stuff.

I agree, I’ve heard that around. Just a quick comparison between the Dragon and MP parts makes it pretty obvious in some cases, and the MP hulls have some really nice detail. 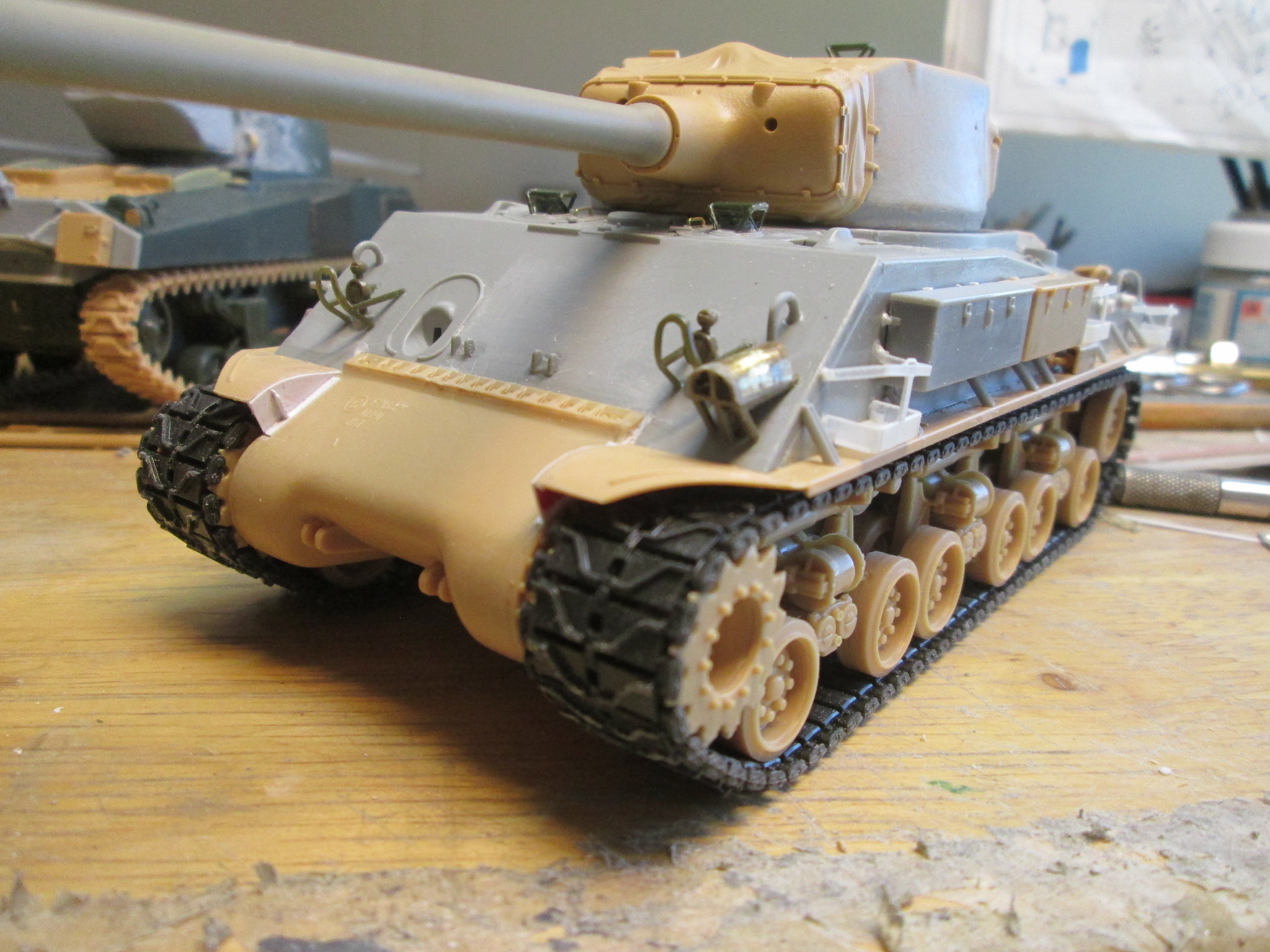 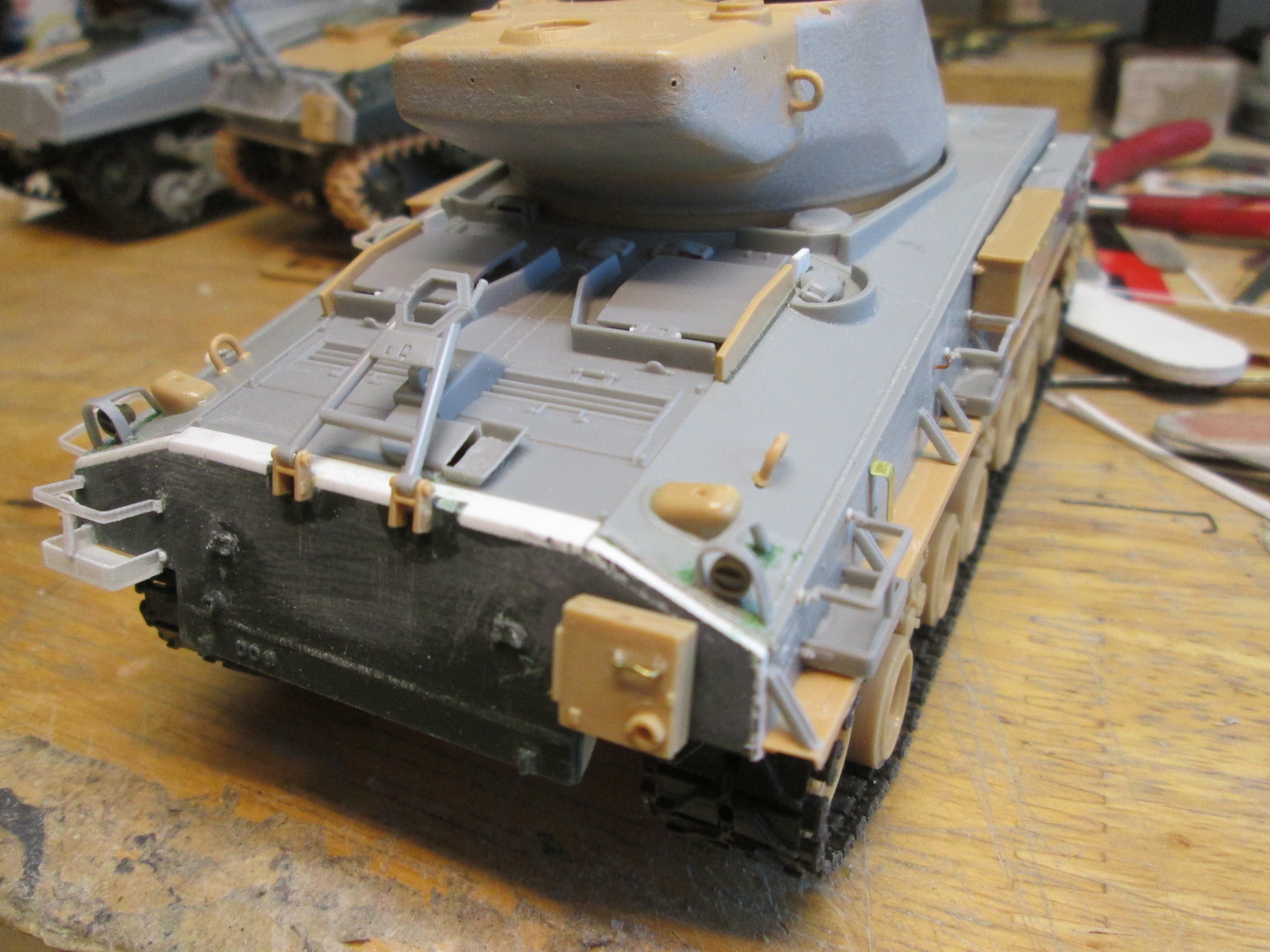 IMG_4857 by Russel Baer, on Flickr
A little surgery was necessary to get the travel lock mounts right to fit the Tamiya M51 part, but my fingers heal fast… Lol.
And the M50’s: 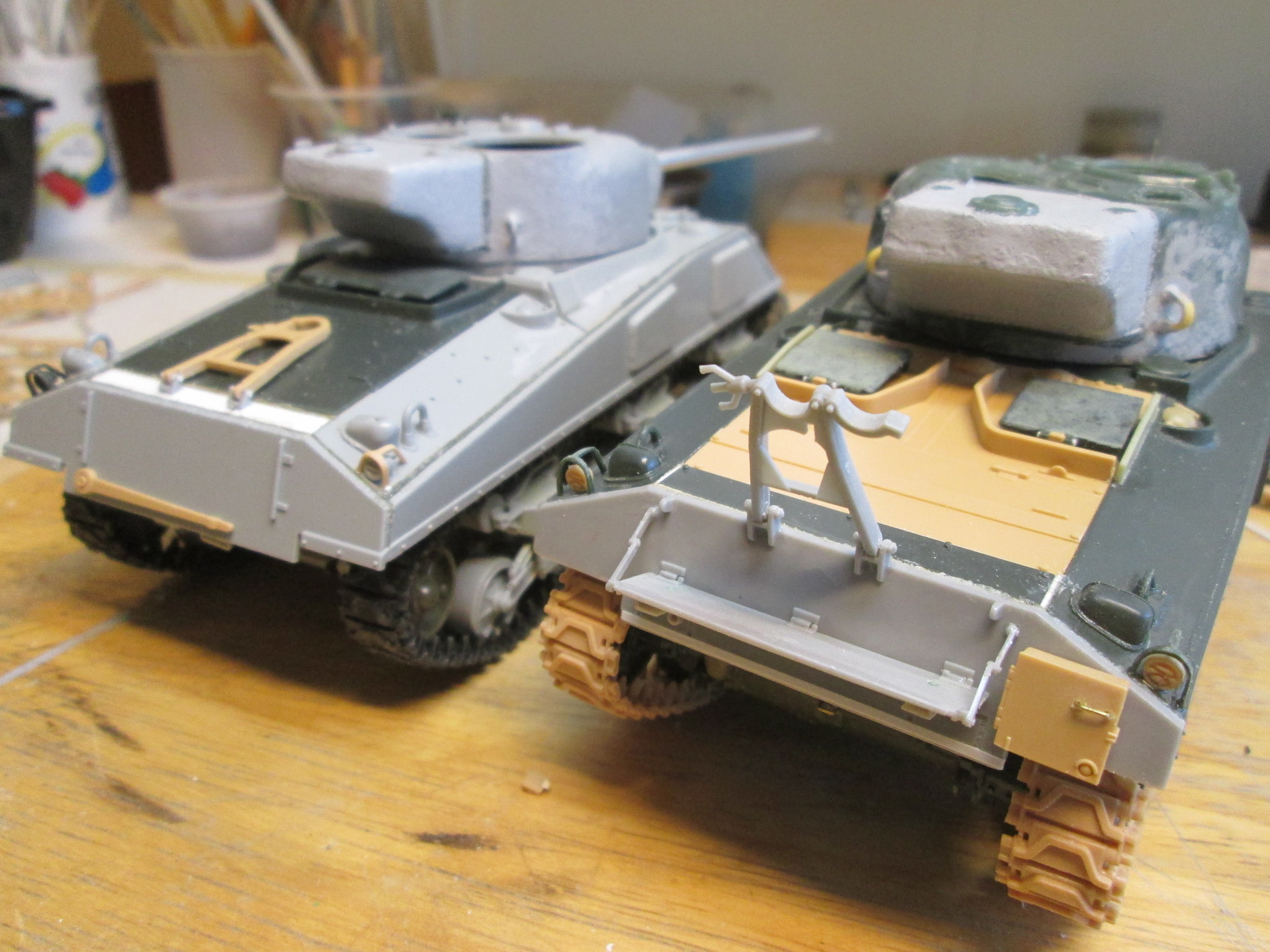 IMG_4858 by Russel Baer, on Flickr
I’ve got pics of several different mounting points for the travel lock on the M4A4(T) hull, none good, so I used the SWAG method to determine its placement.
And the other end: 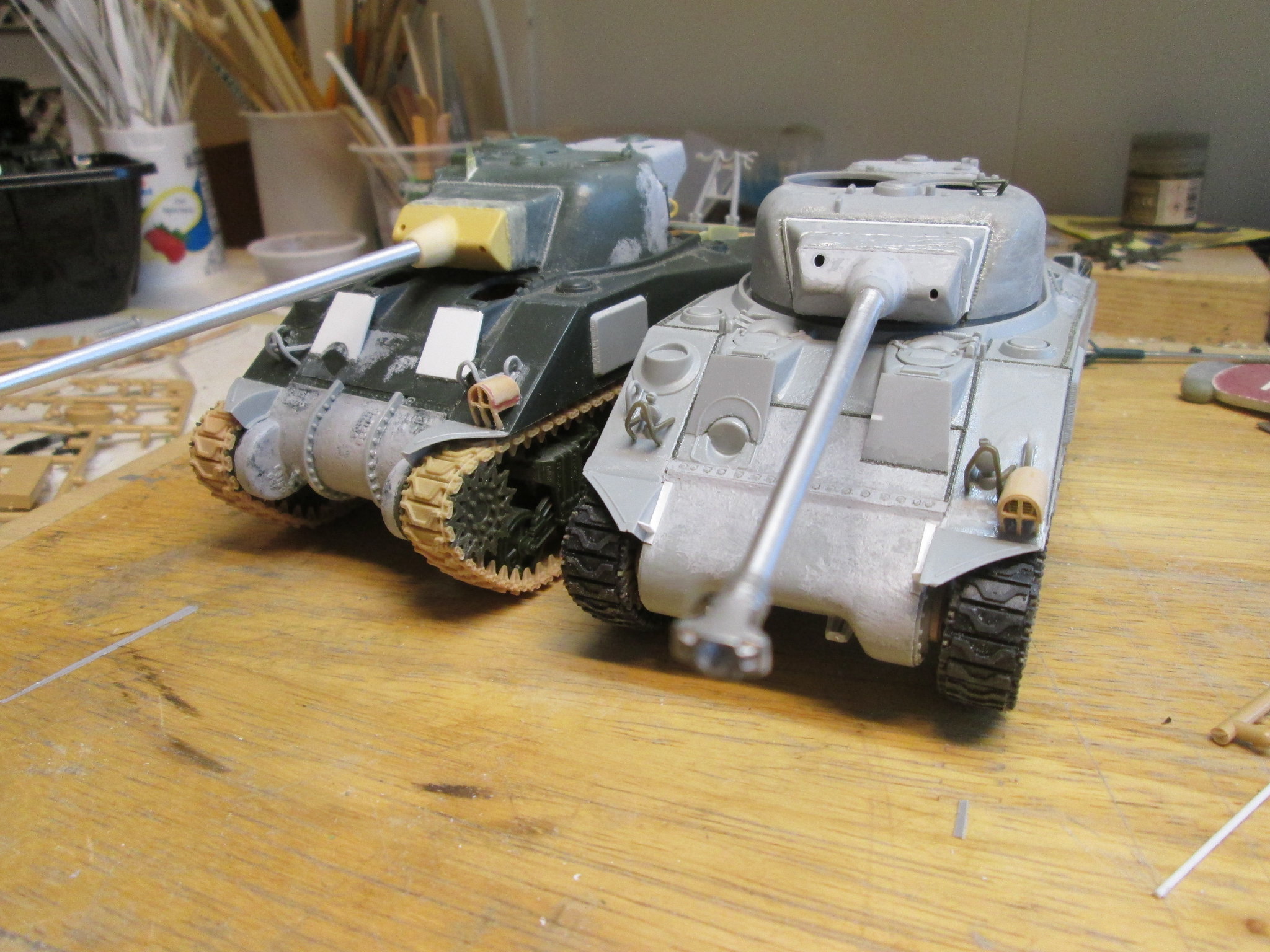 IMG_4859 by Russel Baer, on Flickr
I spent a little time on the mantlets, mostly fixing the Dragon part. It’s texture was more like oatmeal then cast steel.
I may be in trouble, I think I have enough bits and pieces to do a very late M51 on a cast hull, but what I really want to do is a “mid” M50, HVSS on a long hull but I don’t think much of the Dragon kit. RFM? Meng? Seems like a wide open field there.

A little progress on the M51 and the Cummins M50: 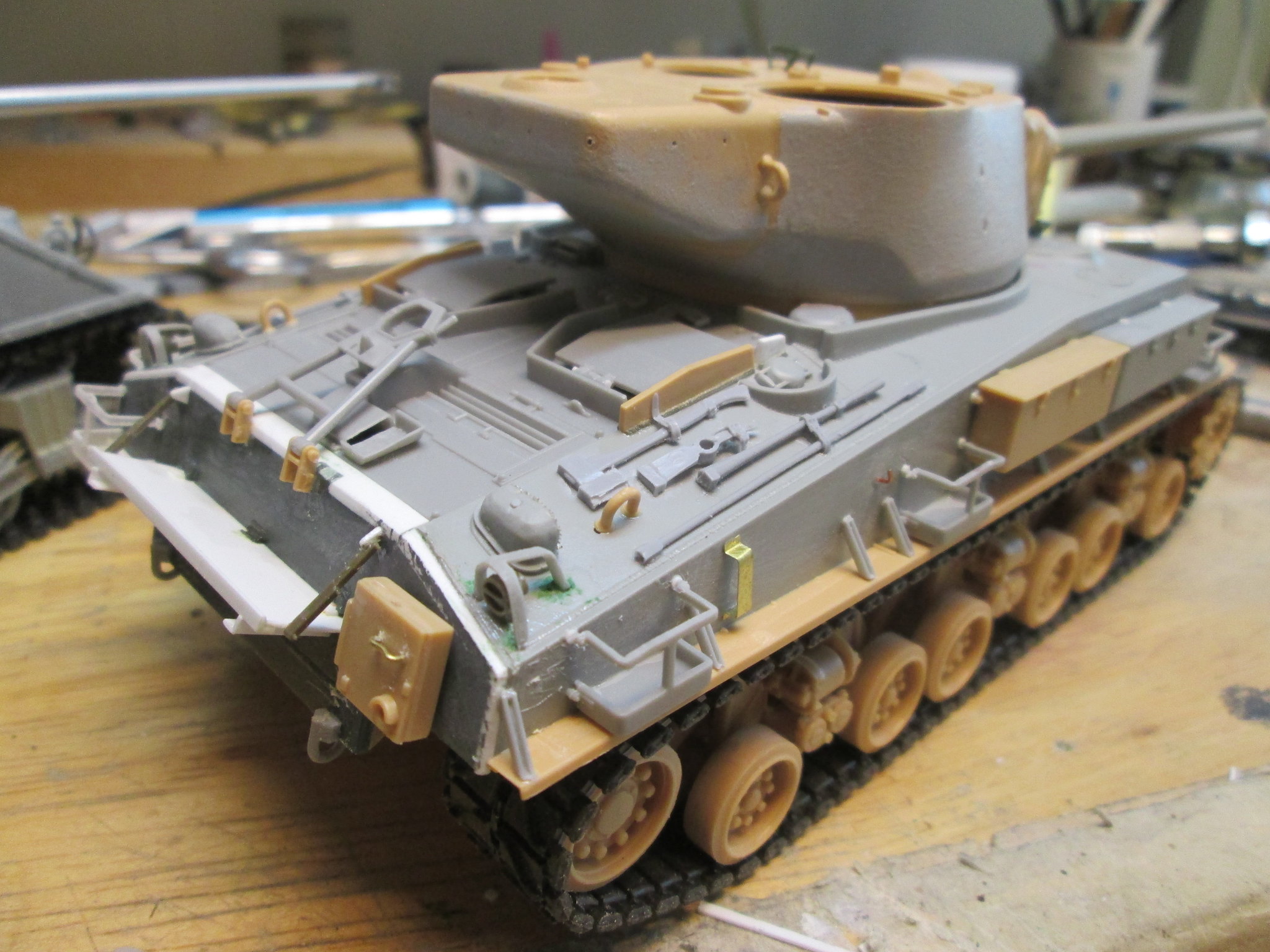 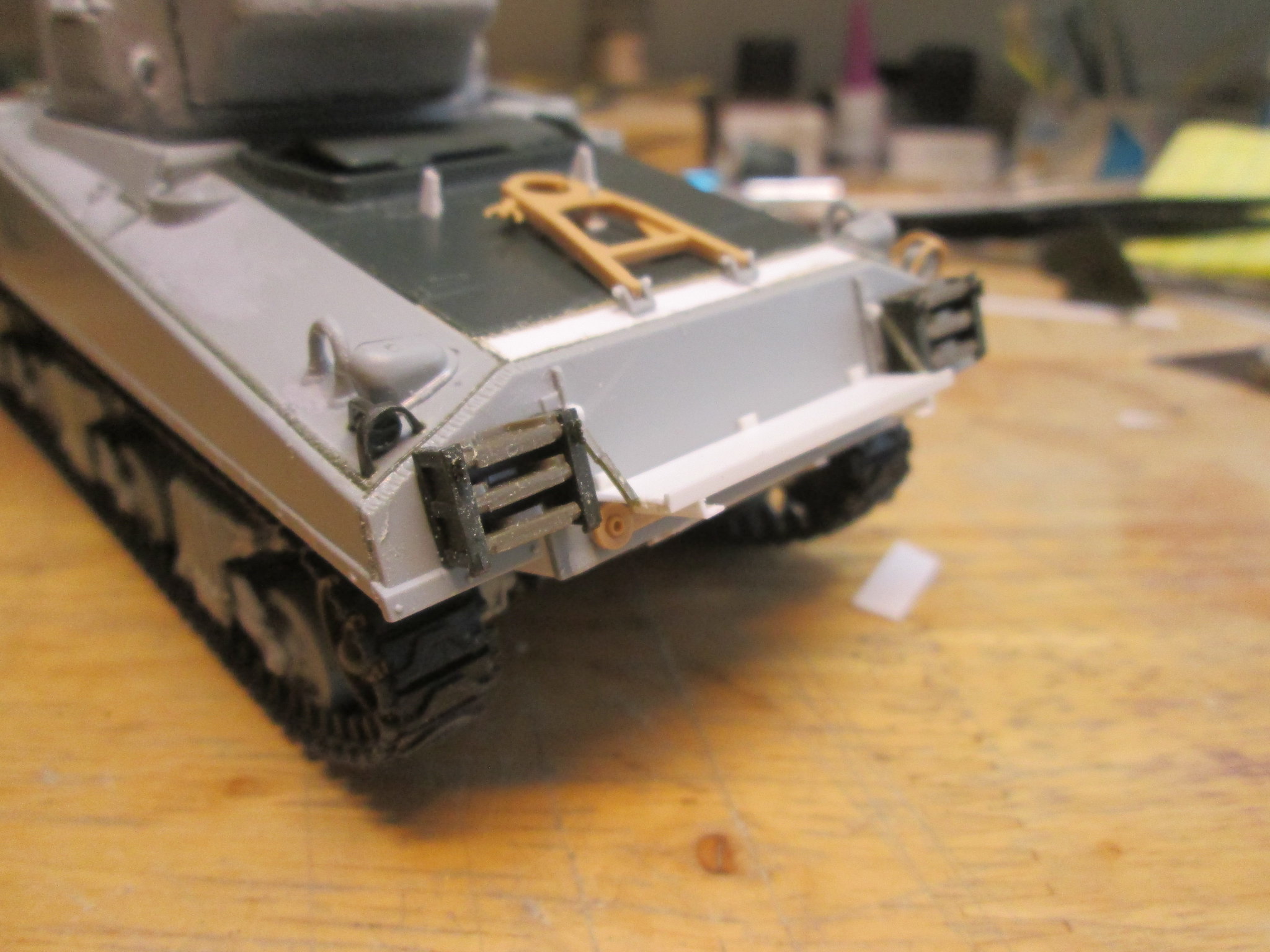 IMG_5321 by Russel Baer, on Flickr
I realized right away after getting Vol 2 of Lion and Lioness of the Line that I need Vol 3, maybe more. Gotta have books…

Book came, and it had line drawings of the tank I’m doing, imagine that. So after a quick change on the engine deck, it’s ready for stowage and then paint: 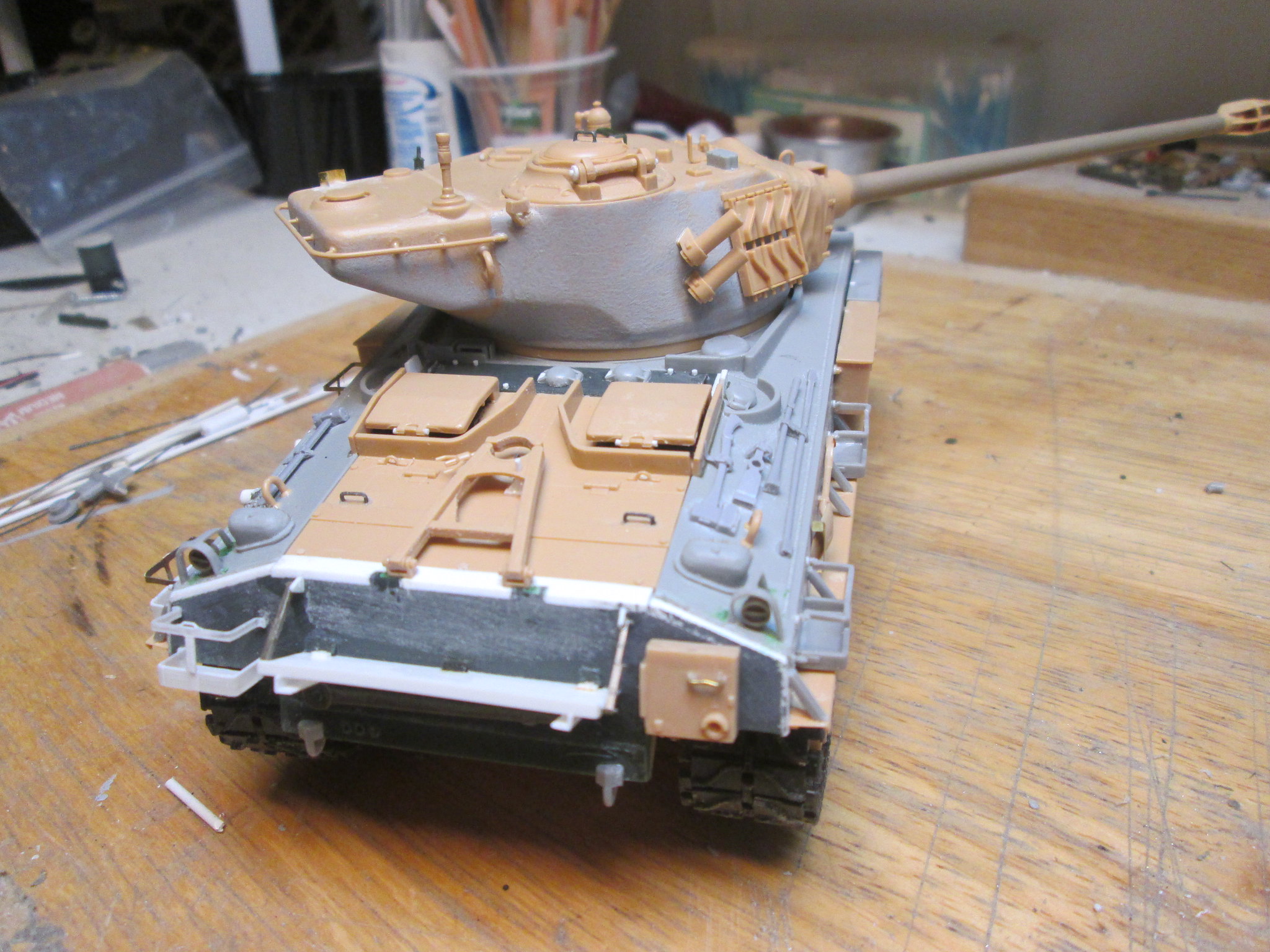 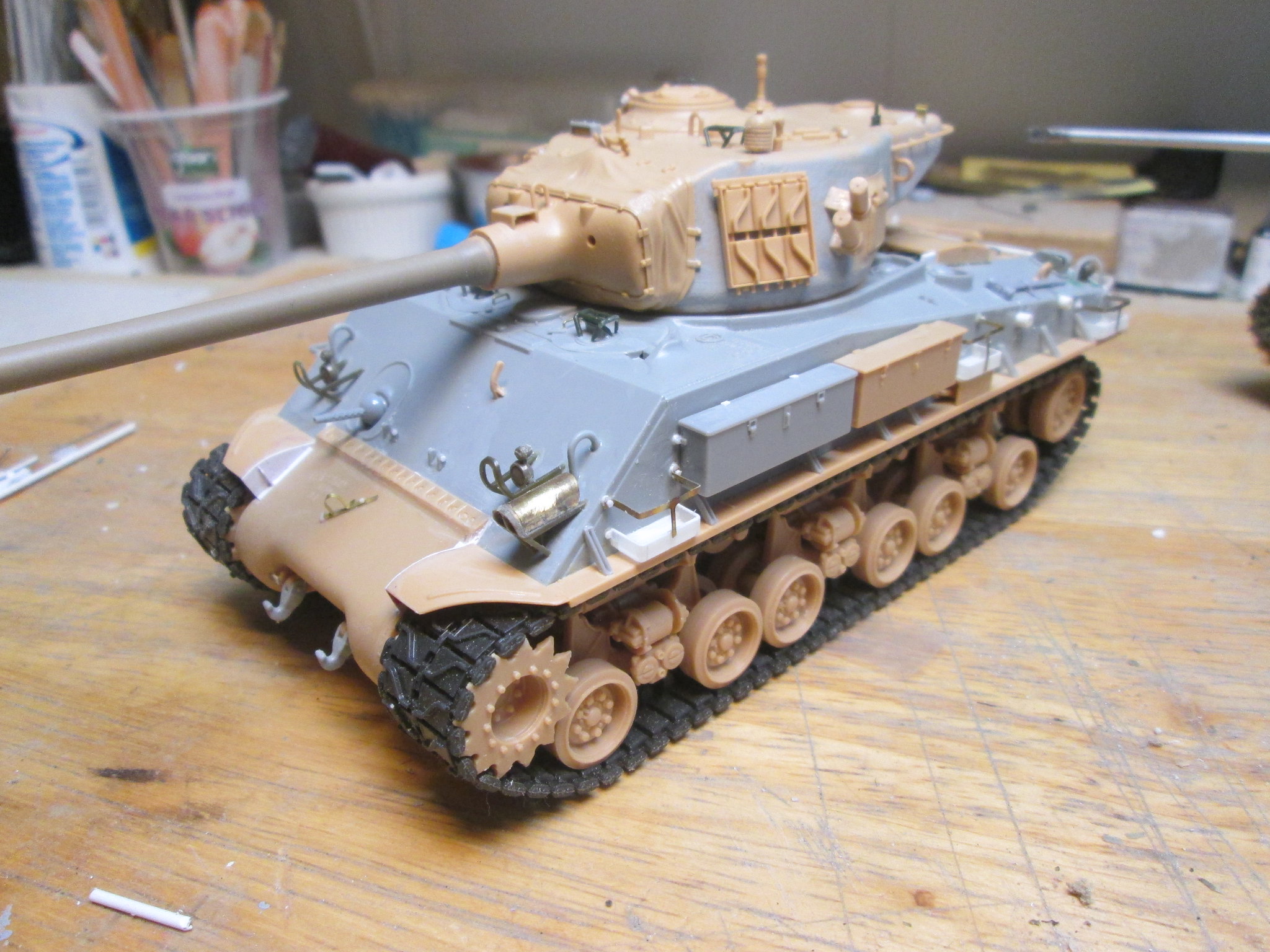 Well, that took a while, but it’s base coated: 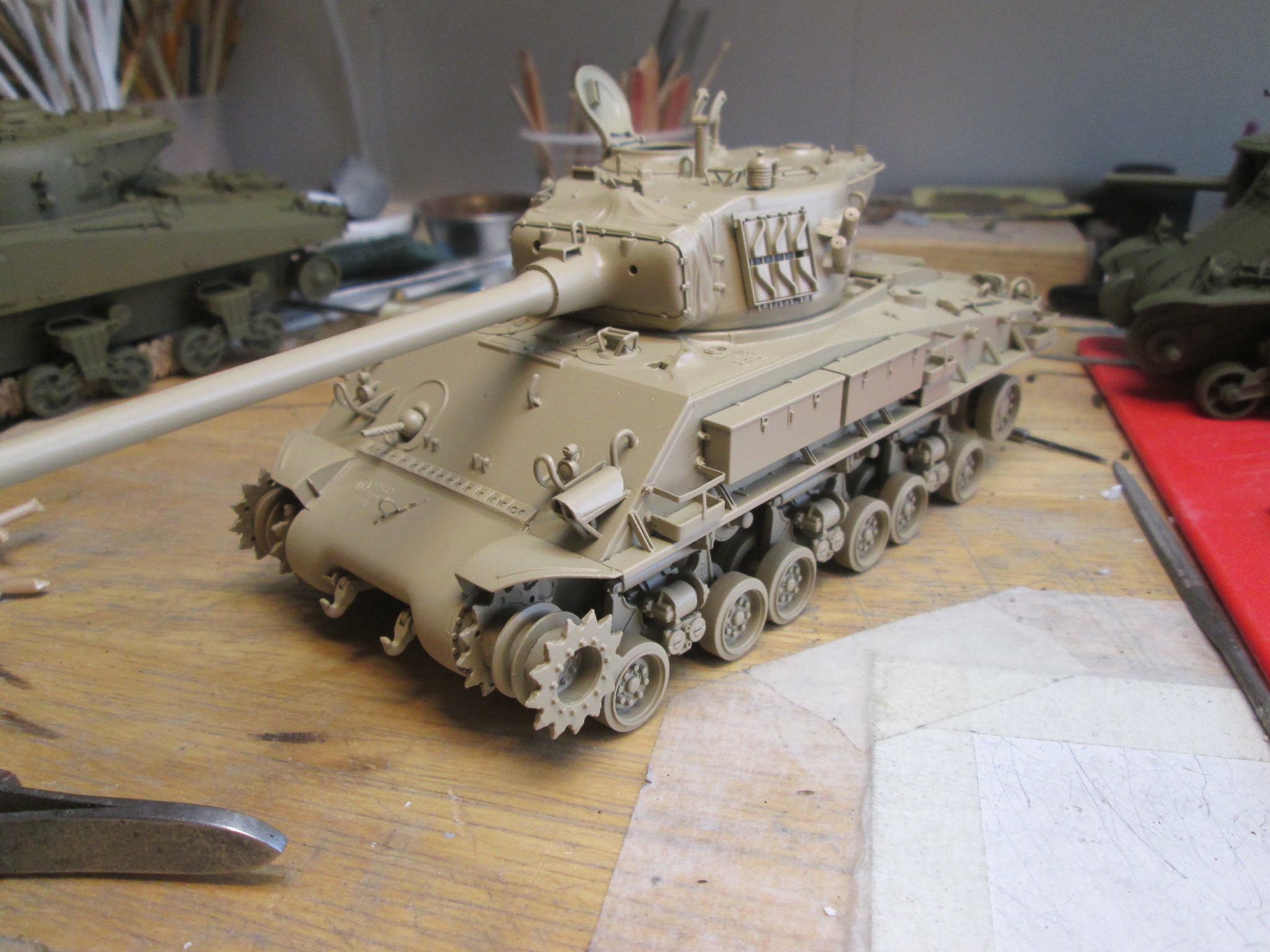