The Box Art Says It All 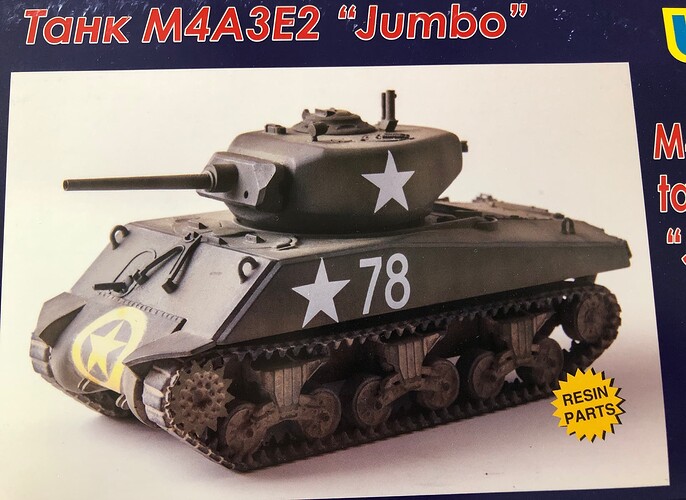 image1920×1399 220 KB
Just received UM M4A3E2 Jumbo and noticed two things. First the beefed up turret mantlet was installed upside down. The second is I’ve never seen a Jumbo Sherman sporting rubber block tracks in combat, several in museums but not in the ETO. Guess I’ll have to scavenge a set of correct tracks. I’ve always liked UM stuff so other than that it’s a nice kit with resin turret and accessories.
1 Like
shermadude March 25, 2022, 7:07pm #2

You might want to check over on the Missing-Lynx Website under the Allied Section, topic: ‘Jumbo Sherman’.
There are pictures of Jumbo Shermans with T51 tracks, one with end connectors and one without, so apparently this configuration did exist!
Regards,Bob

All you need to know about the Jumbo is here…

Yes, some Jumbos were fitted with T-51 tracks later in their service lives, but they were all built with T48 tracks and Duckbill extended end connectors.

Yes thanks I got it, I did see this website before and found at least 1photo of a jumbo with T41/51 block tracks on Missing Lynx but it seems to be rare.

Thanks for the tip, I see 1 photo with T51 tracks but it just doesn’t look quite right to me. I’ll probably replace with T48 or similar.

My point was not what they were built with, but what actually is or isn’t possible. I have also seen photos of Jumbos with T48 tracks, but no end connectors and T54 tracks with end connectors! Real life often trumps our ‘hard and fast rules’ about things. I do agree with you, Frank, it does look a little funny with the T51 tracks and I’m still trying to find a photo of one with the mantlet upside down!
Regards,Bob

The mantlet is upside down on the UM box photo. However the kit instructions show the proper kit installation. I’m sure you won’t find an actual Jumbo with this install as it would be quite impossible I’m sure.

I’m well aware of that, it was a joke. Of course you’ll never find a real life picture of the mantlet like that. Whoever built that model was obviously no expert on the Jumbo, but by dumb luck they did pick a track configuration that existed on combat vehicles in the ETO. Even a broken clock is right twice a day! (That’s another joke in case your wondering.)
Bob

Oh yes it does. There are plenty of photos of various real tanks out there with their tracks on backwards. Never underestimate the power of unsupervised junior enlisted men to screw things up…

I’ve been on both sides of that equation…

That may be true about junior enlisted men, but the army’s most dangerous weapon is still a second lieutenant with a map!
Regards, Bob