The End is in sight

Hi folks, here’s my latest (for your viewing enjoyment). It took a while, as I had to wait for the M-18, and the damaged Panther involved a lot of work, and experimentation.

I had two goals for this project. Depict a Panther, burned-out and displaying its interior, as well as provide a home for the new Tamiya M-18 TD.

So, here’s what I came up with…

It’s late war, and the crew of the M-18 is casually passing a small part of the destroyed Panzer arm. They’re dragging a trailer from their headquarters company, with some of those troops, riding along.

The TD is fairly new and in good shape, while the Panther is a burned-out wreck. 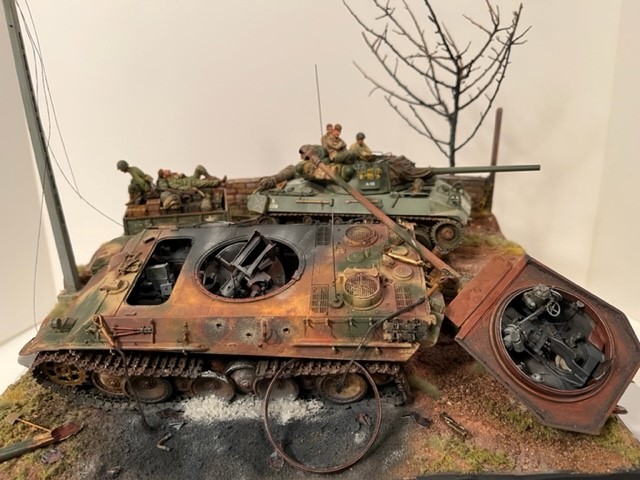 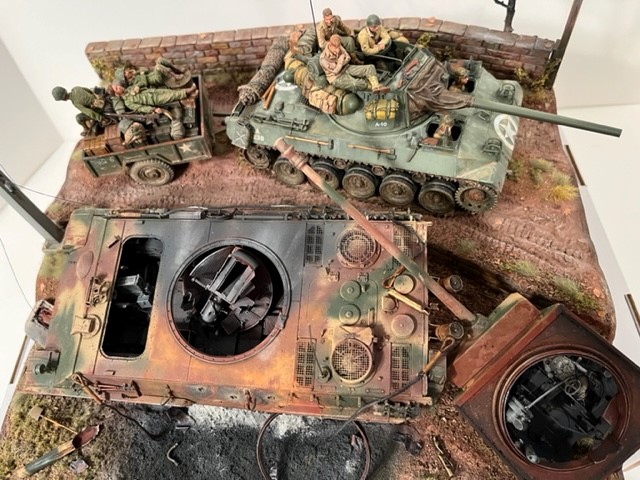 It’s a little crowded, with the multiple levels, and the Panther hides the M-18, so I’m not sure I like the staging, but I’m still trying to work within my self-imposed 30cm size restriction. 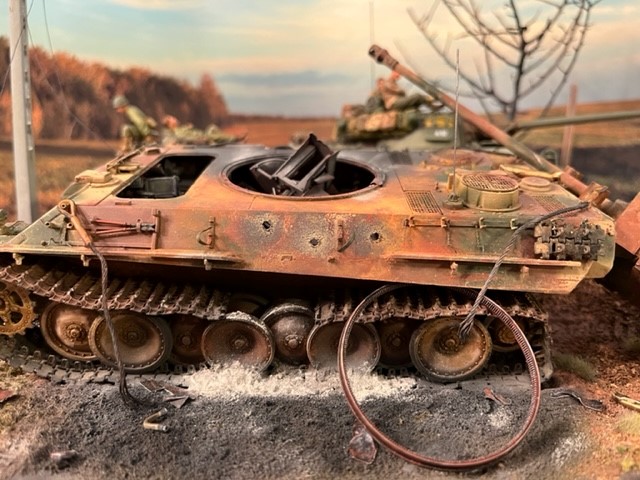 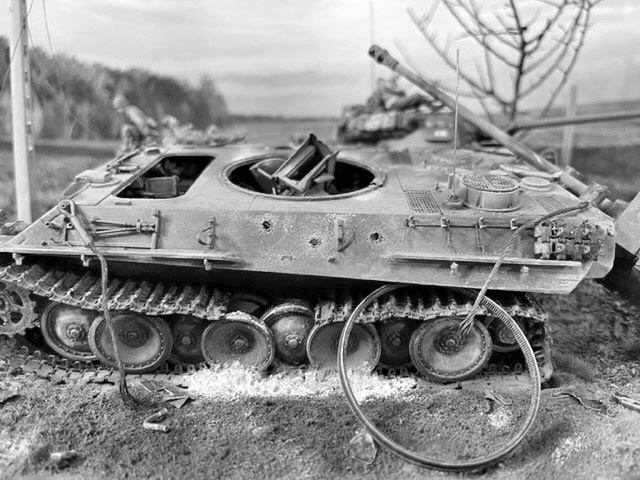 I had concluded that one way to show off (at least some of) the interior, laboriously assembled in tanks that include that plastic, is to build a destroyed Panther with the turret blown off.

It happened on occasion when the ammo was ignited by a shell hit, or by the fire caused by a hit.

Determining how to depict the damaged and burned tank was a challenge. I researched in my library and on the Internet, and found many period, black and white photos, but of course they didn’t provide info on the colors involved. Black and burned? Oxidized/rusted?

Photos from recent wars, do show a lot of oxidized (red/orange) metal where the paint burned off and the steal beneath quickly rusted, so that became an important aspect of the color scheme.

I found some YouTube videos and assorted articles on modeling sites, but very little that described ‘how to model a destroyed & burned tank.’ 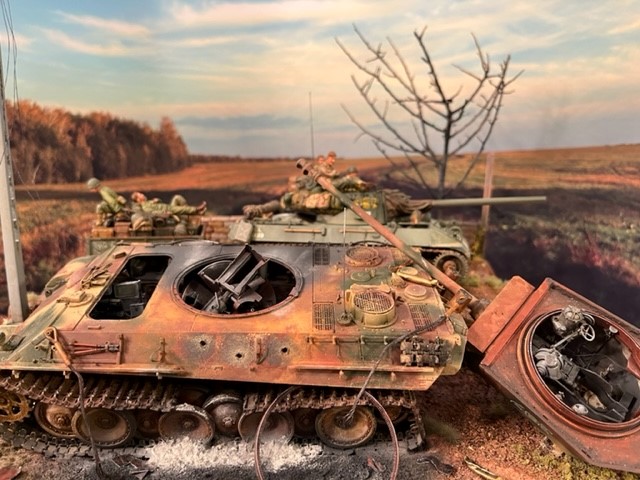 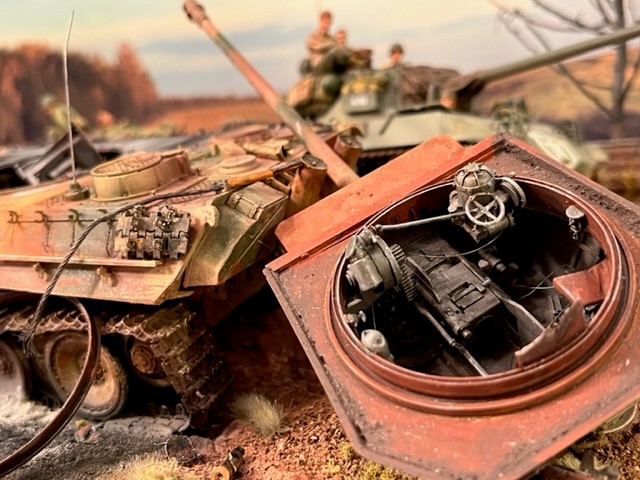 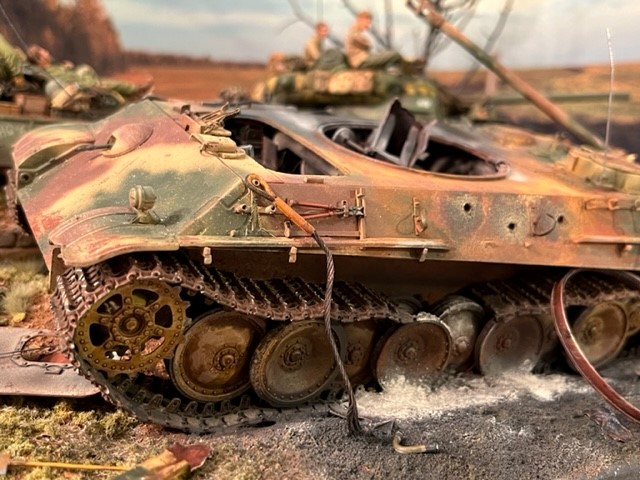 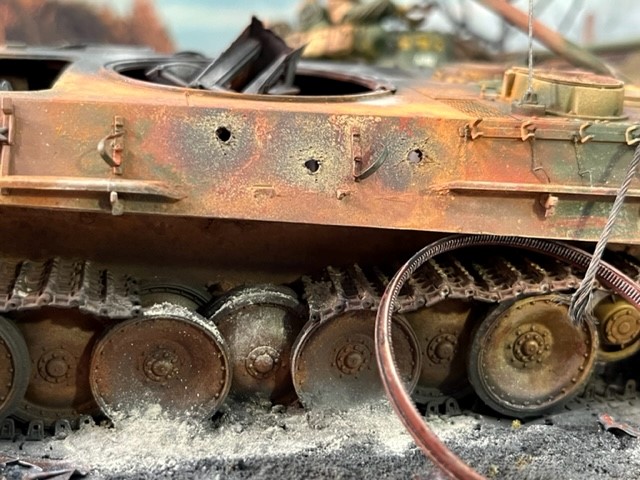 So, here’s what I did, after deciding the level of destruction, and the viewpoint (when placed in a diorama).

I decided that the turret would be burned, inside but not on the outside as it departed the hull, early in the fiery process. The turret would have been blown off, and then the body sat and burned thereafter. I didn’t, however want the hull to be a total burned-out hulk. Perhaps it burned itself out, quickly, or a passing rain storm put it out…

In the event that you like my depiction, here are the basic painting steps, I used for exterior:

Dark (steel) grey in the seriously damaged side, indicative of the underlying steal, and as a base color for most seriously burned area – around the three shell hits.

It was a common practice: keep hitting that enemy tank until it burns.

Apply some texture paint (Citadel dark brown mud) where the areas transition from bare steel to red primer, and where red primer would transition to cammo paint. (to represent bubbling paint & rust). This had little visual effect, though.

Remove said primer from those areas to be most burned, leaving a lot of bare grey metal

Massive paint removal on all burnt areas, revealing both dark grey and red primer paints, as well as general chipping over the rest of the tank.

Black and grey smoke sprayed around the burned areas

And then, of course dust and dirt – I prefer artist’s oils for that… 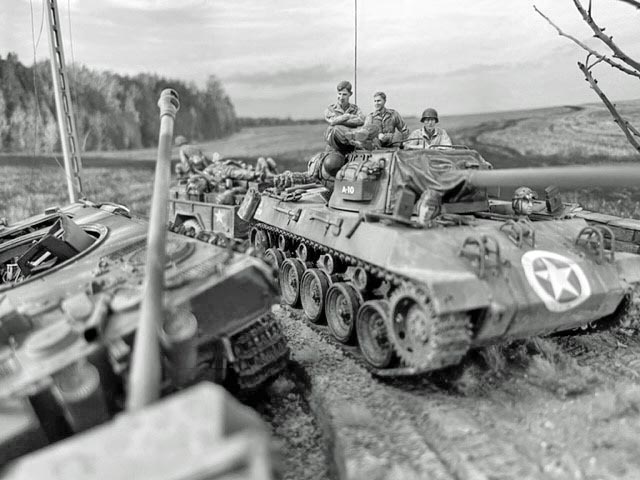 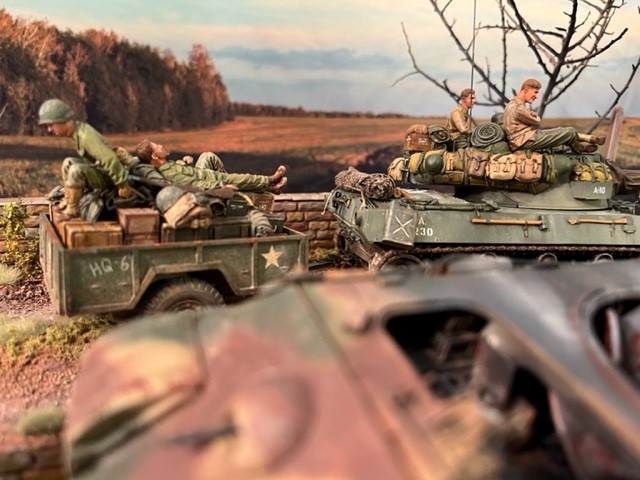 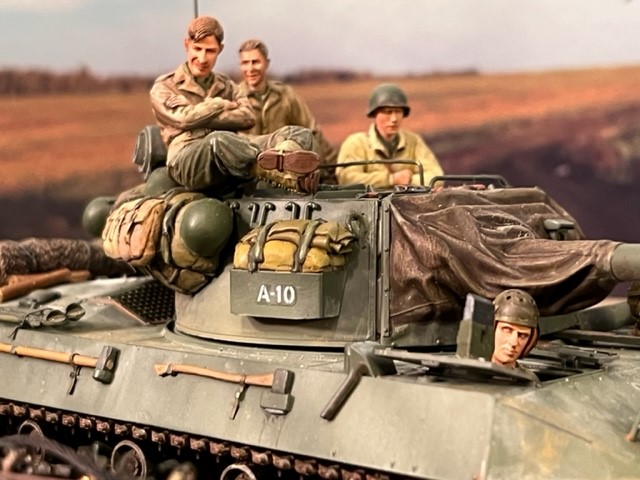 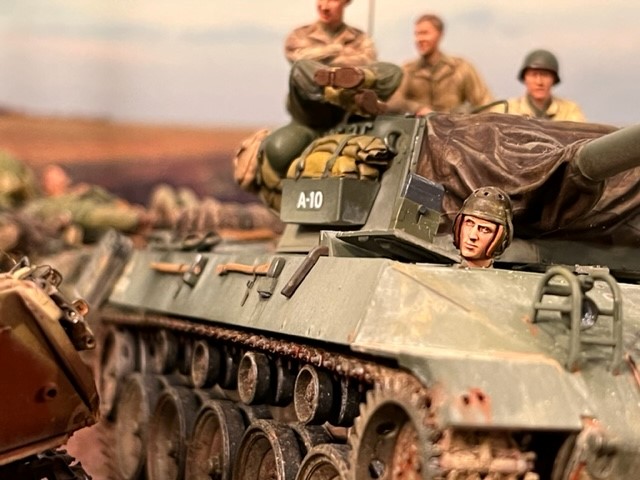 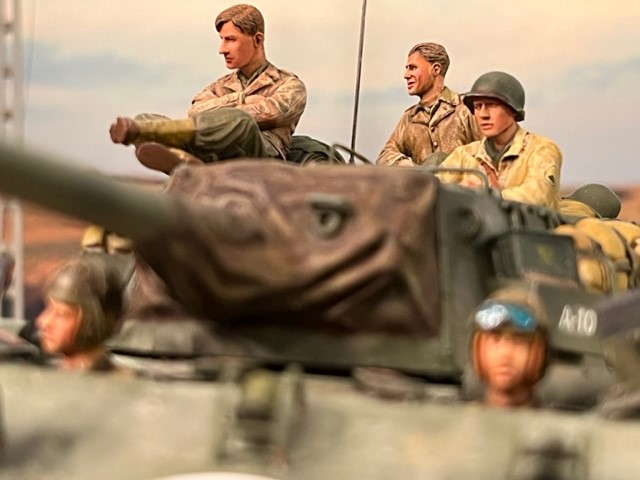 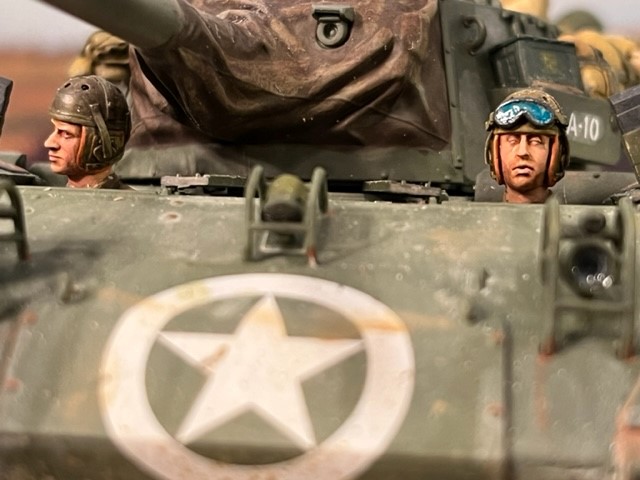 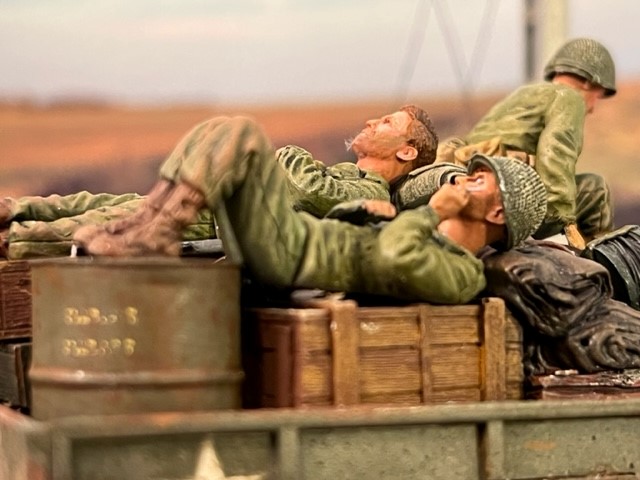 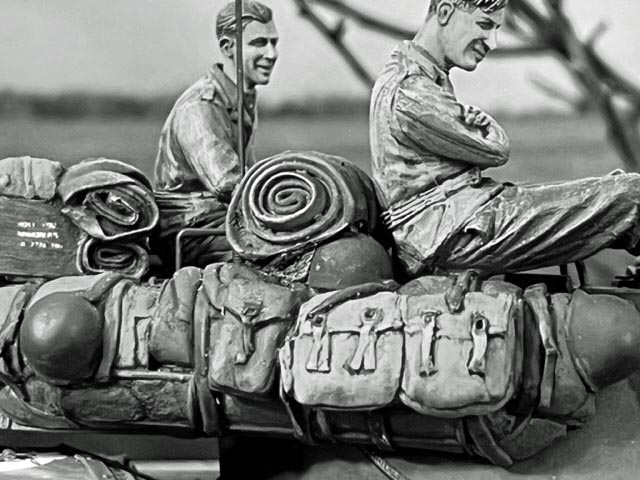 The M-18 is Tamiya’s new kit. It’s a good kit, but it didn’t seem to include all of the gory detail we’re seeing in Takom or Meng kits these days.
I added the Value Gear stowage set, and figures from Tamiya, Bronco and MiniArt with Hornet heads.

The M101 Trailer is from Itraleri, with a Value Gear cargo load.

The Panther G is the Takom kit. With appropriate painting and damage. In the photos I’ve seen the interiors of destroyed tanks look like a scrap heap, with the contents almost unidentifiable. I tried to replicate that, as much as I could. Metal after-market Panther tracks, ordered from Amazon (‘Sector35’). Not bad…

I prefer Sculpt-a-Mold, paper mâché, for my groundwork. The stonework are cut from panels from MBS (Model Builders Supply) – I use them a lot, in lieu of carving foam.

So, what do you think? As always, all feedback welcome.

Nice wreck. Like the addition of the trailer to the Hellcat. It’s unfortunate that the Panther blocks the view of the M18.

Fantastic details everywhere you look.
And thank you very much for the clear description on how to make a burned out wreck, will be very handy for those who want to do something similar

That’s a nicely put together scene Ralph- the wreck looks just perfect to me and I like the way you have the middle half of the hull burned out but the camo still on the far ends- it really emphasises the burned portion but also shows off your nicely applied camo! I rather like the US figures too- plenty of great face work and interesting poses all around- also nice to see the M18 all laden down with kit and towing a trailer with a whole load more.

Looks great! Definitely a bad day at the office for the German crew…

Thanks for the comments, folks. I appreciate them. Yes, the M18 is both dwarfed by the Panther (it’s phenomenal how small that TD is, in comparison), and the staging hides it even more. I thought about a bigger step up, between foreground and background, but didn’t want it to become a cliff…
And I do hope that the burned and damaged Panther looks realistic enough that others might want to emulate my approach - just a lot of layers…
And, ValueGear’s stowage kit for the M-18 is perfect, to give that little M-18 the ‘lived in’ look.

Well done! I have got to learn to paint figures like this. They really add to the model.

Full Disclosure: It was pointed out to me that the M101 Trailer, attached to the rear of the M-18 did not come into service until the 1950s. (Scheisse !) The ‘Ben Hur’ trailer used during the war looks similar, but is a bit larger. There is a kit of it available from Plus Model.
I should have done better homework. But I’m not inclined to retrofit this project – too many other, new ones to tackle.
Let this be a lesson to you… Ralph

I like what you’ve created here, being that one actually needs to take a lil’ while in appreciating everything, and yet it is a simple story easily understood: late war, the victorious on their way to glory, passing the vanquished, dead in their tracks.

Nice to ack. the oops factor w/ the trailer, and I think we all can respect the caution used regarding the size.
Well done!

Oh that is some fantastic work. Beautiful…Cheers mark