And in good old England it will be cloudy

Haha, ok not funny, but yeah that was funny

And as predicted is as cloudy as hell.
Oh well I will have to wait for the next one as well as you Robin

I think they said we have about a week to view them. Today was just the conjunction. Each night this week they will move further apart but still viewable.

Sadly they never moved below the cloud deck…

I didn’t get any pictures because I didn’t get a new camera until Christmas. From the backyard, we saw the two planets. They looked like big bright stars.

We actually saw Saturn’s rings as well. Not super detailed like on a science poster. The rings looked like haze at 2 o’clock and 8 o’clock positions.

I gave up in the end, it was cloudy for the past week, in fact the only night where it wasn’t that bad, I was out, and no where near my camera or telescope

.
But here is a pic of Saturn I took a couple of months ago. 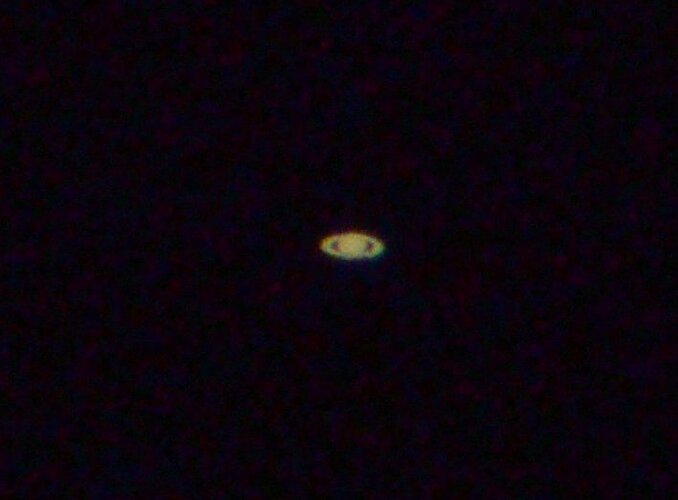 That is a cool shot! I managed to see the 2 planets while there was still separation in them, and before some rain clouds moved in later that night. A Facebook friend & former colleague posted some great pics (or was it a link to some great pics?), taken, among other places, at an observatory in Abu Dhabi. The pics were in color, so you could see the different colors of Jupiter (as well as the red eye), and the rings around Saturn were fairly distinct. But from here outside of Washigton D.C., it just looked like 2 bright stars that were close together. Glad I got to see it!

Thanks guys.
I did see the planets quite close from my Father in Laws and it did just look like 2 very bright stars. Really wanted to capture it on my camera, but it was not to be.
Andy