Tracks for an M-47 Patton

I recently brought an old Italeri’s 1/35 M-47 Patton. The kit misses the tracks, so I’m looking for a replacement.

I know that Bronco has a set, but I’m already check it and it’s a complete nightmare to build. I don’t want to use a metal Friuilmodel set (it’s a lot of money) so, I’m interested in an AFV Club set, but they only have tracks for an M-46 and M-48. So, the question is: the M-46 track set can fit for an M-47?

Hope someone can give me a clue.

Edit: See Ginos post below concerning the tracks for the M48

Yes, the M46 tracks should also fit a M47. The M47 hull was refined from the M46, then fitted with the T42 turret, but the running gear was essentially the same.

I have used AFV Club T-80 tracks and to be honest, they were a nightmare. If their other sets are like that one, I’d seriously consider the Bronco ones.

Bronco may have more parts, but after building several of their sets, I can state that the effort is worth it.

The AFV Club ones tend to break between the track pads when you remove them from the sprue. DO NOT snip them - slice them off with numerous gentle strokes of the blade or saw them off. If you snip they will bend and break in the middle. The T-80 had serious knock out marks and sink marks.

AFV Club are not workable - the end connectors fall off and the centre guides do not sit correctly most of the time. Some people state if you paint the tracks first, the paint will hold them on, but that did not work on the T-80 set. I had to glue them and Tamiya extra thin did not work well. The AFV styrene rejected glue. The T-80’s came apart after minor handling.

Bronco on the other hand are easy to remove, clean and fit and take glue well. Yes more time and fiddly, but in the end, I think I would have spent less time on those than I did on the t-80’s.

However, others may have had a better experience than I, and maybe the set you are looking at is better than the T80.

I don’t know how people think paint would help keep them workable. I use rubber cement and worked very well.

I totally agree with the Bronco/AFV Club comparison.

Bronco tracks may seem a bit too tedious of a task but the time invested in assembly is worth it since you will not have to sand/fill/fix anything like with AFV Club tracks, which are not workable (at least their Sherman, M46,M47,M48,M60 and Abrams tracks).
The styrene used in AFV tracks is brittle because of the black color used and you can always find sinkmarks on some or all of the links.

As a sidenote, Bronco M60 tracks dont fit Takom or AFV Club kit sprockets because they were designed for Academy/Tamiya kits.

I have some hope HeavyHobby is working/planning on some 3D-printed Patton family tracks.

I have several sets of these tracks. Please let me know if you want them. 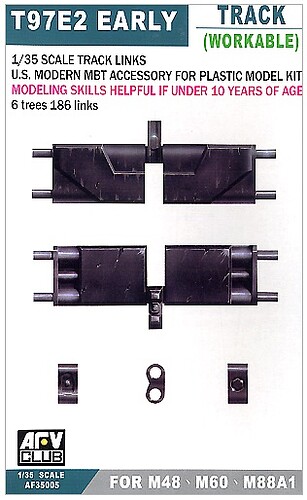 I have several sets of these tracks. Please let me know if you want them.

Hello man. Please send me a list to this address:

Hello! I will send them right out. I just say this message.