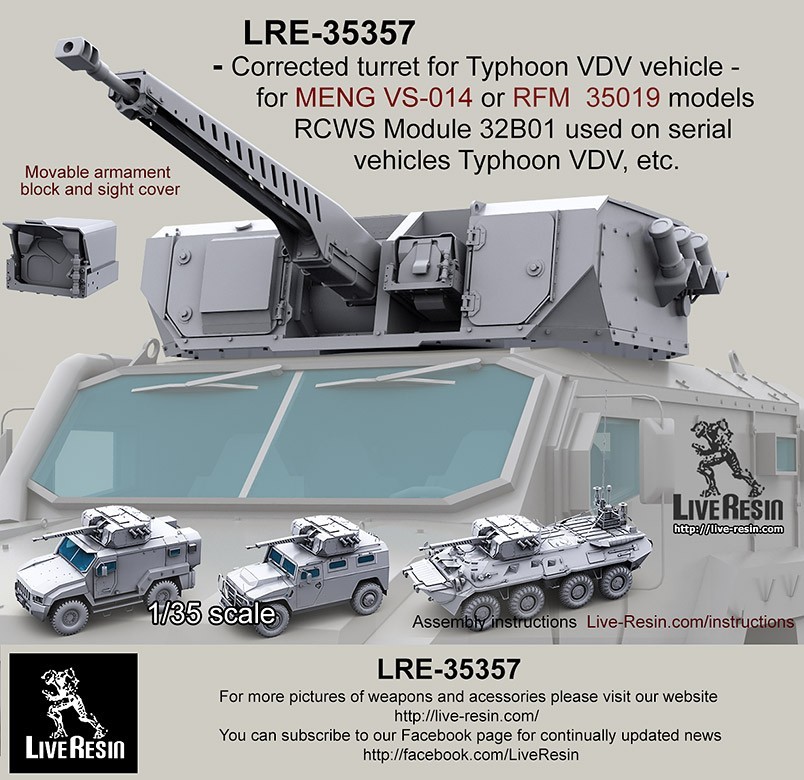 This is partial text from the full article (usually with photos) at https://armorama.com/news/turret-for-typhoon-vdv-vehicle---rcws-module-32v01
BMoran September 8, 2021, 9:51pm #2

I purchased this turret for my Meng Typhoon-VDV a couple of months back. It wasn’t until I received it that I realized that there is more to creating a production Typhoon-VDV than replacing the turret. All of the production Typhoons I’ve seen pictures of have a different configuration for the winch/front bumper/radiator grille. RPG has announced a kit with this configuration including this style turret. MiniArm also has a resin conversion set that includes the other items besides the turret that need to be changed. Other than this shortcoming, Live Resin’s turret is an exceptional bit of resin, as are most of their products.

I agree on the front winch setup… Also, don’t forget to change the Kama tires, these are replaced with Michelin on operational vehicles.

I think I will just complete my Meng kit as it is: a pre-production vehicle. I will wait on the RPG kit of the production series and compare it’s turret with Live Resin’s turret and decide which one to use. The CAD shots of MiniArm’s conversion for a production series vehicle that I have seen (doesn’t show on their website yet) show some other changes such as the hood/bonnet and a panel on the right rear that looks like it possible a cover for A/C or ventilation fans. CAD shots of both the RPG kit and the MiniArm conversion are on Scalemates.com.