During the opening phases of Operation Barbarossa, 48 of the 59 monstrous T-35 tanks produced were operational in the western Ukraine. Almost all were used by the 34th Tank Division from the 8th Mechanized Corps. One of the regiments in this division, the 67th Tank Regiment, suffered heavy losses from air assaults on the first day of the war and was almost completely wiped out. This vehicle is from the second company of the first battalion, as evident by the red and white bars on the main turret. 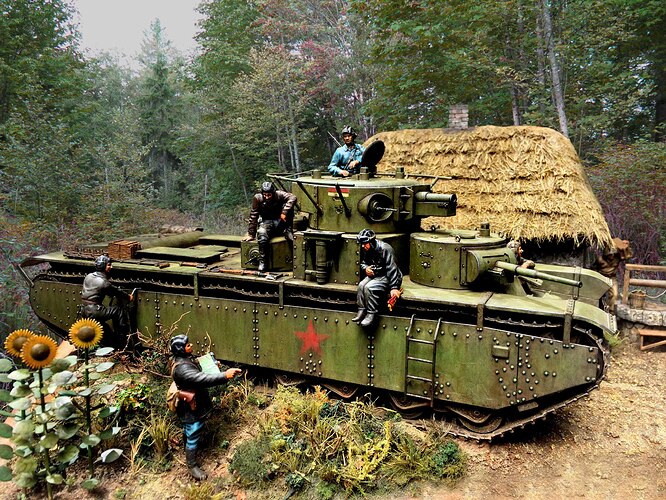 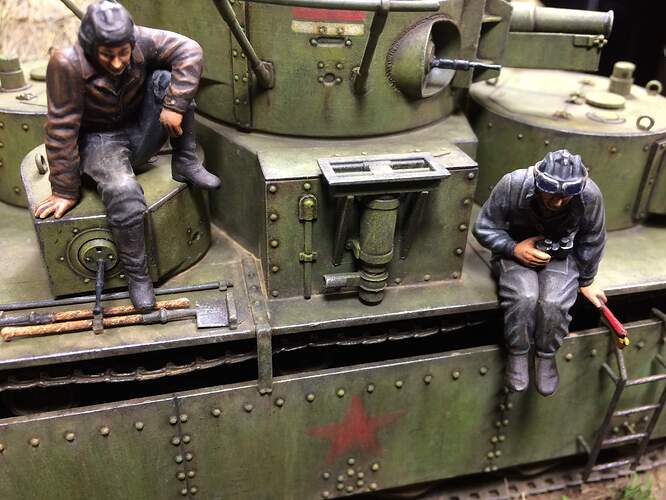 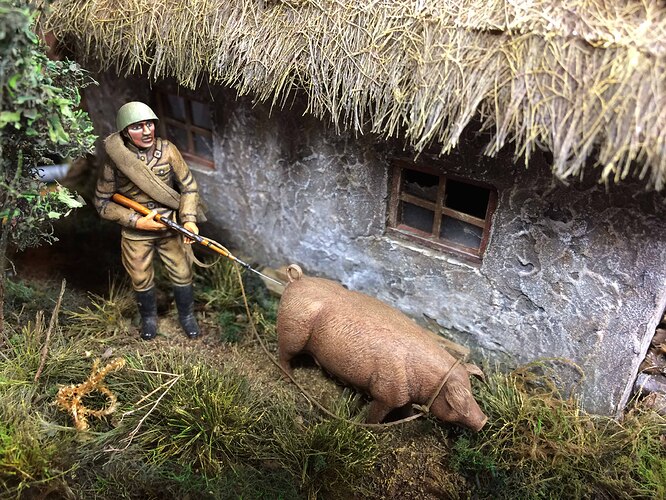 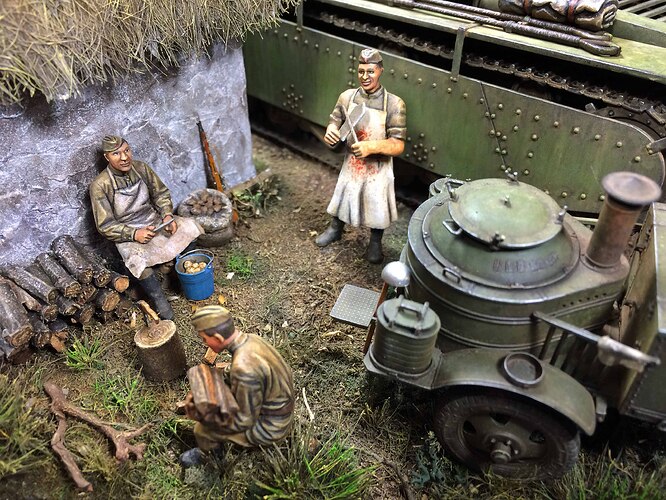 Nice diorama but I am particularly impressed with the paint and weathering on the T-35.
Great job!

Very nice. Ditto on the painting and weathering on the T-35. Good title as well.

Great job on the dio, and the T-35 looks just right. Ominous title, too… I like it!

Great diorama. The T-35 is a work of art! Incredible weathering!

Thanks for the comments everyone! This was a less than shake-n-bake build, to say the least. Lots of fun trying to get the turrets to fit in their sockets, temperamental tracks and the superstructure was warped and cracked in half when I tried to straighten it out. Probably the most fun was building this guy; 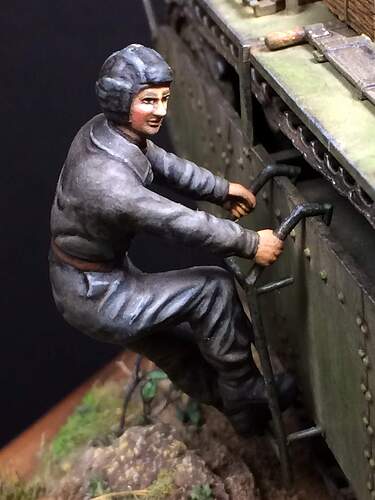 Getting the positions just right so that he fit the ladder involved a lot of surgery, I didn’t think he was going to make it.

Here’s the driver as well; 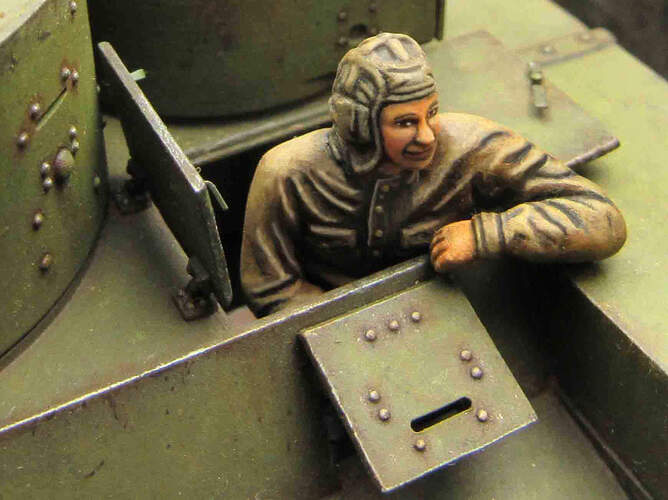 You had me at the first photo, awesome & everything else they said! And yet my eyes keep bouncing off the officers’ uniforms, I think they should be more like blue-jean denim than bright turquoise? The thatched roof looks so convincing, how did you achieve that?

Dioramartin; Yeah, you’re right, those Disco-blue pantsuits do look awfully bright! More a problem of the lighting and high contrast of the first image than they actually are. The Cerulean Blue oil paint I used for highlighting was probably a bit too saturated as well. Hopefully this looks better; 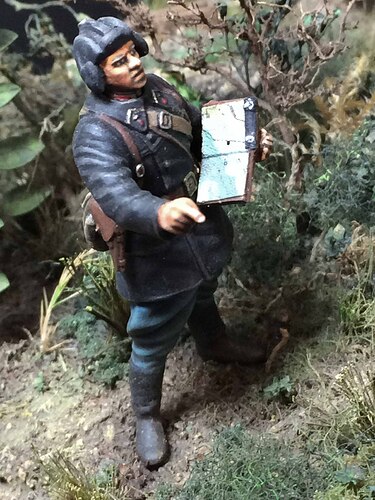 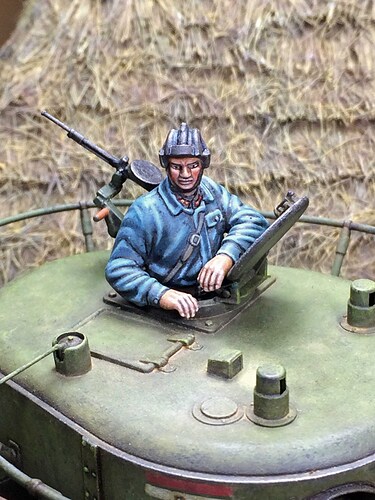 The house is built from foam core covered with spackle. The roof the made with rope fibers laid down in layers.

Had a feeling the light intensity wasn’t helping, map guy’s much better but yes commander’s still too um Dior? Well that thatch looks like it a lot of work (like everything else) but it sure was worth it, fantastic diorama

Thank you Cheyenne, I appreciate everyone’s comments. I don’t post my work very often, so I don’t always know whether things look right or not without peoples’ feedback.

And speaking of not looking right, Commander Starky McBluepants has been given a bath of Payne’s Grey and white oils in a effort to tone-down his 1970’s Cerulean Blue Leisure Suit. Not as easy as I thought it would be, it’s hard not to wipe out the shadowing while desaturating the brightness. I reduced the overall image saturation and contrast as well. Hopefully he looks better now; 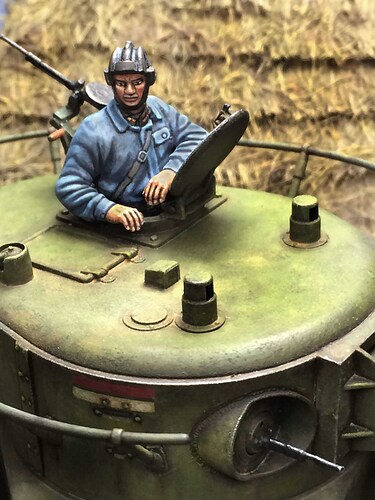 My photography skills leave something to be desired. I’m just shooting these on my computer desk with desk lamps and my phone camera. I have a light-defusing acrylic sheet that helps, but my techniques are primitive at best.

In my own defense, I blame Zvezda’s box art for his outlandish fashions, which probably overly-influenced my judgment at the time; 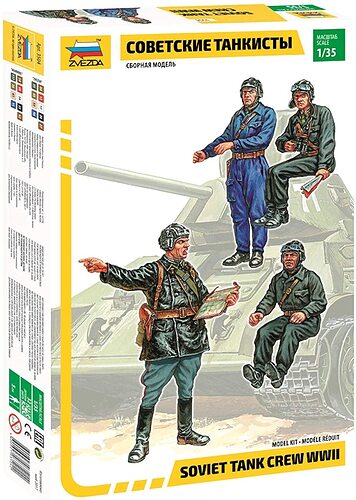