Before i get stuck in I just wanted to wish everyone a Happy New Year!

Well as the title suggests i’ve got a kit of a Viking here. 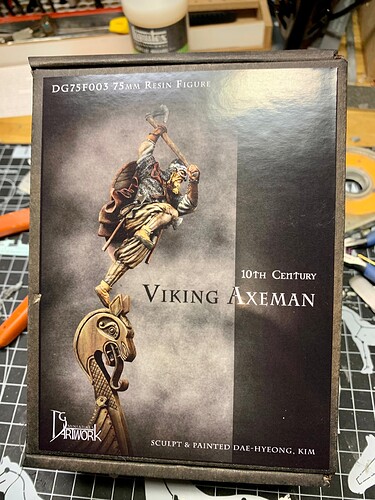 DG Artwork make some interesting pieces and this is, I think you’ll agree, a striking one. You can near imagine this fella jumping off a longboat on Lindisfarne! 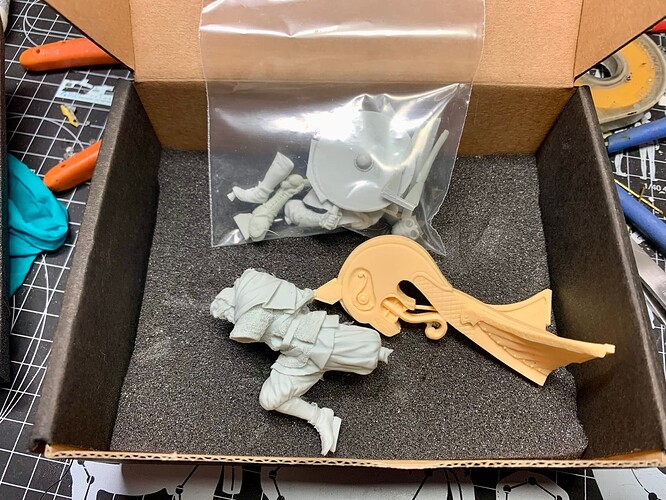 The sculpt is nicely done with the chain mail probably being the highlight of the whole thing. There are not one but three axes- one on each side in addition to the long handled one- not messing about this dude! The helmet is okay but a bit undersized around the rear where the fit is a bit so-so.

My only other gripe was the shield- the cast was not as crisp as the other parts so I embellished the details a bit with a micro-chisel and roughed up the inner face wood with a file and gave it a bit of blade and arrow damage on the front. 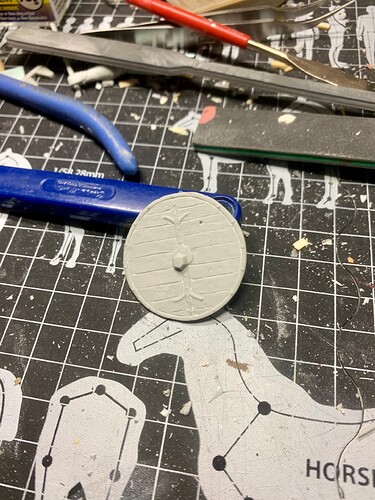 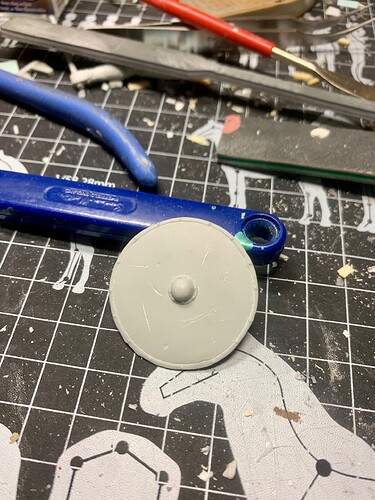 I was really impressed with the prow of the longboat which is a single piece and just awesome looking! 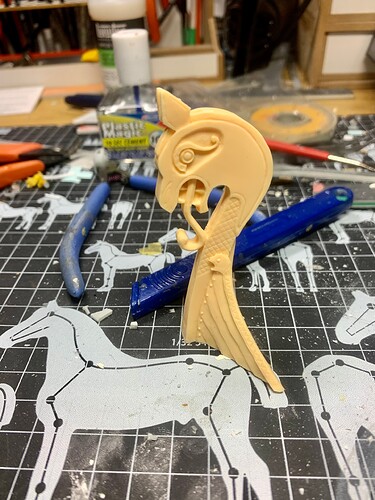 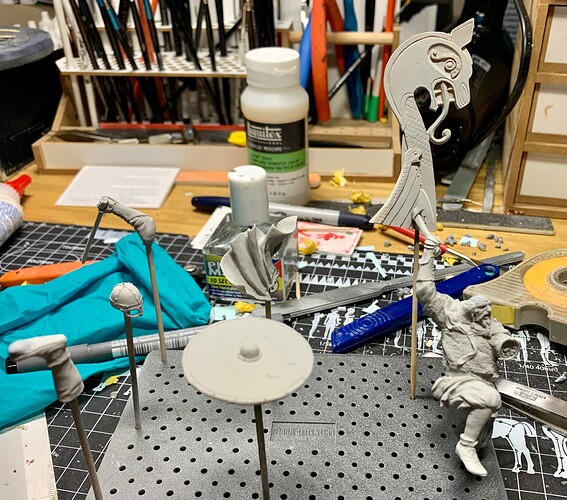 Now as you can see all the parts have been primed and I’ve started painting so I’ll have some pics of that soon.

In the box art of this figure you can see the colors are quite muted and they exhibit a dirty, perhaps even damp sort of look. I quite like the muted and dark look myself but, seeing some Viking clothing references, there appeared to be garments in all sorts of colors so I decided to add some more color to my version. 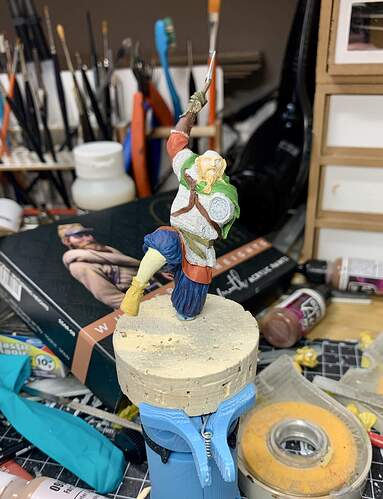 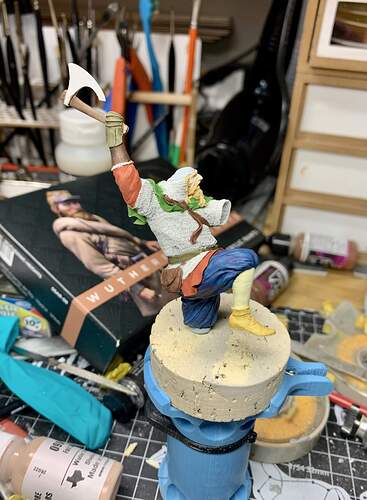 These are just basic coats right now- still a way to go on them- I will likely make the trousers lighter and worn looking while I will probably tone down the green cape.

The chain mail will be left to last as it needs a satin black undercoat which will help the metal colors to be nice and vibrant.

Right now I’m working on the shield and the prow of the longboat. I hope to get an update on those sorted soon.

He is certainly (if a tad implausibly) dynamically posed! I wonder if the original idea was to have him standing with one foot on the deck of a longship and the raised foot on the gunwale? Or indeed leaping but with the lower foot on the gunwale? If the former, it would be a good depiction of Onund “Treefoot” Ofeigsson at the Battle of Hafrsfjord against King Harald “Fairhair”, first King of Norway and father of Eric “Bloodaxe”. This picture attempts to illustrate the moment immediately prior to Onund’s amputation: 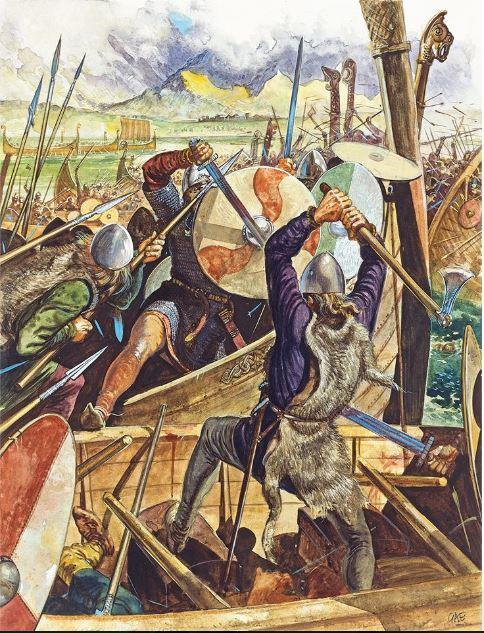 That’s a neat piece of art and history there Tom. I have to say I agree with you about the pose in terms of plausibility. But it looks cool though, and sometimes that’s all a figure needs for it to make it into my stash

The Longboat prow is a wonderfully sculpted base for the figure. I’ve started it by airbrushing a wood tone. 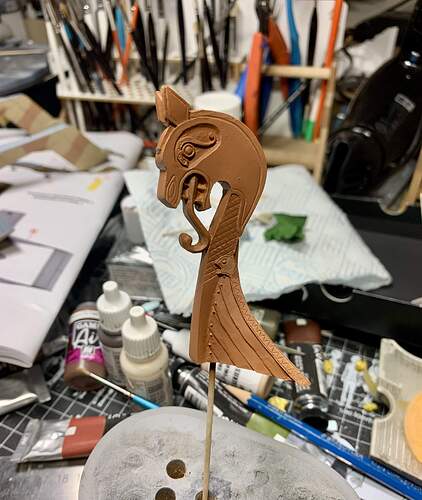 I haven’t decided yet how to tackle it from this point but I am leaning towards oil paint rendering.

Next up for the airbrush was the shield. I decided on a two color design split down the middle. 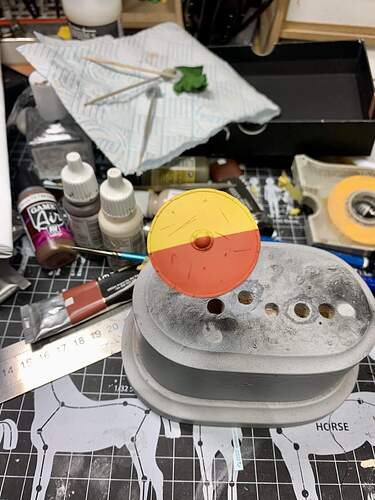 Next it was back to the figure and I started to detail the skin colors. For the skin I’m using Reaper Minis ‘Fair Skin’ 3 Pack as the main colors (the 3 Pack has a Base, Shadow and Highlight color).The picture below was taken after some shadow work. 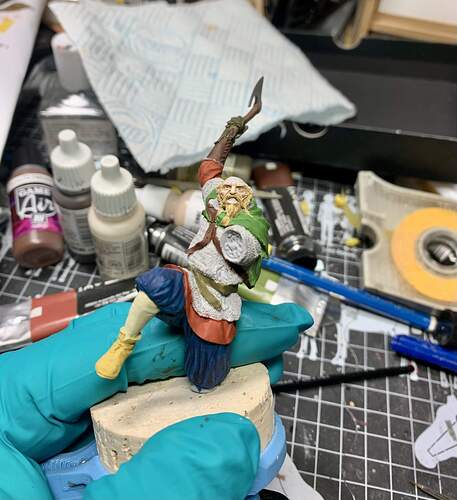 After this I blended the tones a little with some glazing and then added some highlights. With these I felt the face was a little too light- some bits seemed too close to white to me. Adding some red ochre to the base paint and using a few glazed coats brought the color back to a more natural tone. 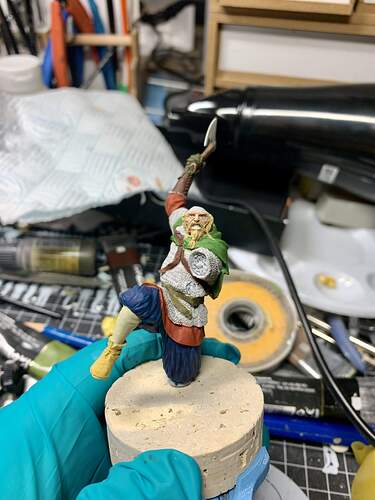 This is where I’m at now. I will move on to the beard as well as detailing the mouth before deciding if the skin needs any more work.

The hair and beard on this figure is pretty cool and sculpted so well that it makes painting it rather enjoyable. I picked fair blonde hair and also detailed the mouth and lips. Once done I added some very subtle extra shadow and highlight to finish off the face. 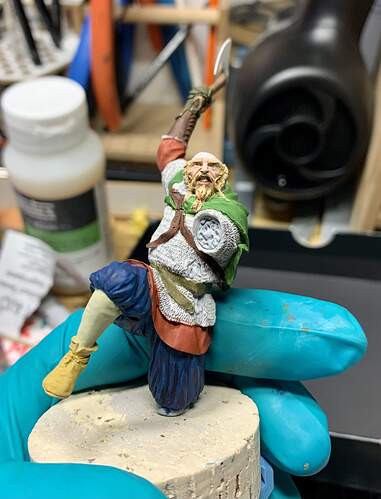 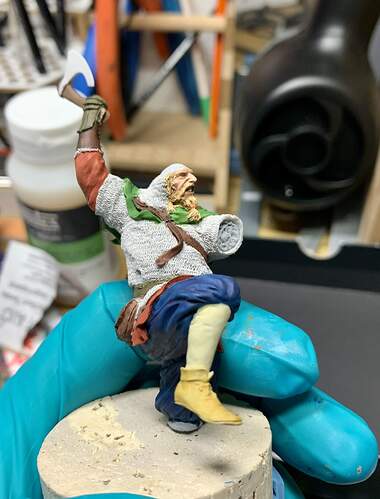 I think a choice of heads for this fig would have been nice so you could show off a little more of the face as it is very characterful.

Next up was the leather. 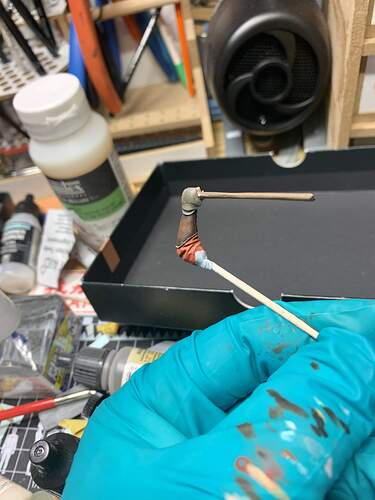 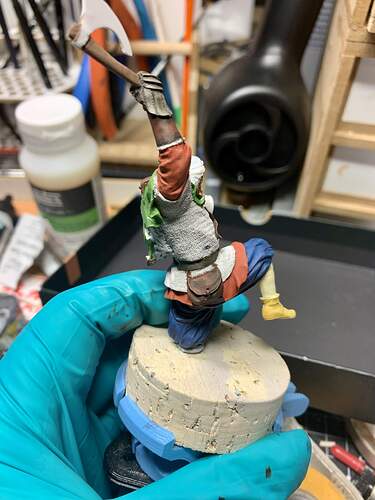 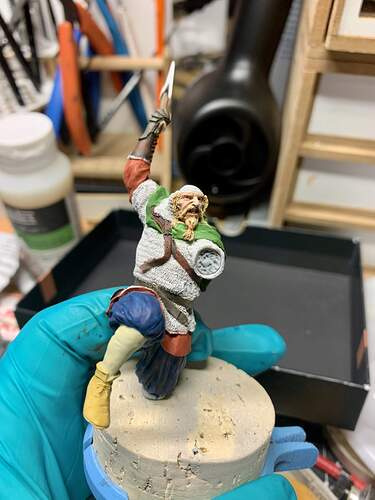 These parts will get a coat of satin varnish later to impart that slight sheen that leather has compared to the other fabrics.

The wood on the inside of the shield
was next. My attempt to add some texture and definition to the rather thin moulding here made painting it a bit easier. 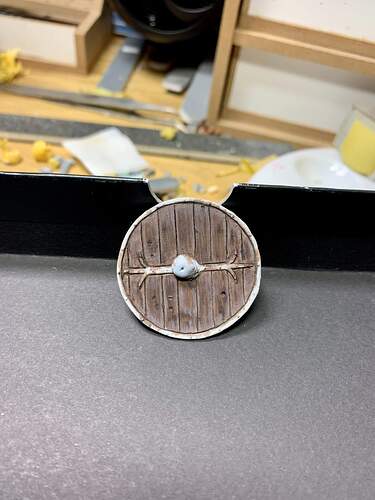 Next up will be the shoes and then it will be on to the other bits of clothing.

This is looking great so far. I like the pose and prop, great dynamics. Ruck On.