Since I recently bought my first airbrush (it only took about 35 years…) I went through the old boxes, looking for something to use it on.
I found an old Airfix VW Beetle that was almost done. Just needed some paint.
There are lots of detailing that I simply didnt’t bother with. I just wanted to try different weathering techniques.

So nevermind the lack of some basic parts and such. I just wanted some feedback on the weathering so have at it! 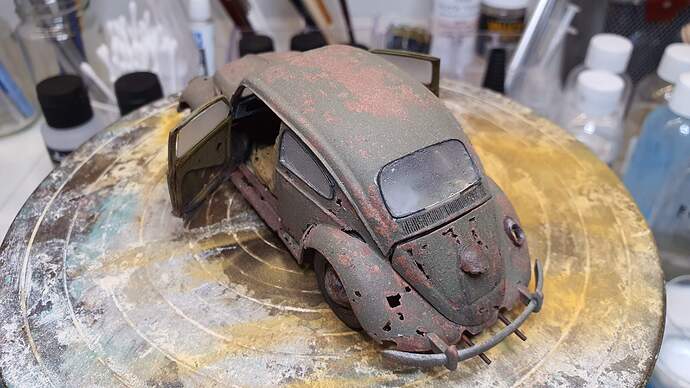 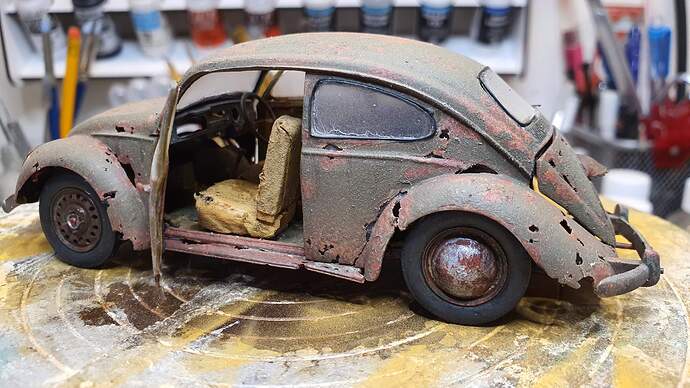 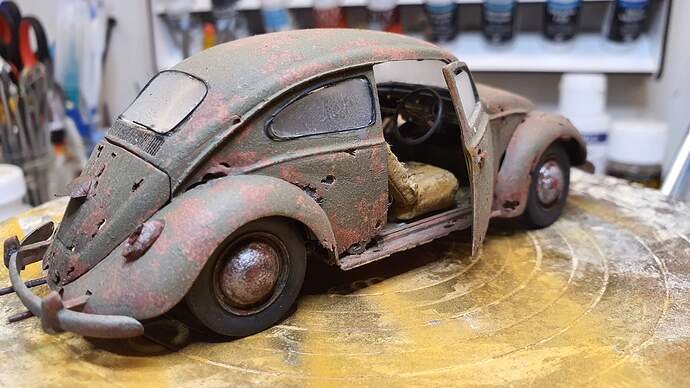 Looks good and better then my first try. What paint did you use?

I only used Vallejo colors. I tried the chipping fluid but I must say I like hairspray better. Maybe it just takes some time to learn how to use it properly.

I couldn’t get Vallejo to chip well for me using hairspray the few times I tried. Probably user error, for me I had better luck with Tamiya paint.

I think you need to thin the paint more and/or get closer to the subject. The paint looks grainy to me which as I recall caused by the paint drying before hitting the plastic. You can also use a drop or two of Vallejo retarder to help with the process.

Yes, the paint looks very grainy. And I have to say as a vintage VW enthusiast who has spent many afternoons in salvage yards looking for parts I have never seen a VW rust like that.

It must have been subject to excessively acid rain, perhaps it was downwind of a VW diesel emissions testing station?

Given it’s just a test item it’s surely permissible to try out techniques to a greater degree than one might employ when one is more experienced with them? I’m actually rather impressed with the results, maybe even envious given my declining skills mean all I can hope for even out of an OOB build is some sort of mutant glue bomb…

The techniques used arw well done . the degree of weathering is in the eye of the beholder.
I may offer a suggestion. Around the edges of the rust holes add a small amount of a dark rust color with a small bit of newer rust color added and some small streaking rust runs.
All in all the work is executed exceptionally well.

As for thw paint being grainy, that is just the result of whats called dry spray. That can be prevented by thinning a little more and adjusting air pressure or adding retarder .
Now here is the bright side of this. Say for example you want to replicate a fine texture on seats or a vinyl top , then mix your paint a touch heavy and lightly dry spray multiple coats . ( kiss coats) allow to dry , apply a flat clear and then spray final the color you want for the end result.

Thanks everyone for some great advice that I will be sure to try out.
As for the grainy paint I think it is because of me trying to mimic dust. I sprayed a thin layer of light gray pretty much the way you, Chris, described. A mist with a bit heavy layer.
As for the rust I can only agree with all of the above… It is an old kit that I used different techniques on. Specifically rustholes and such.

Thanks again for all your inputs. This is what modelling is all about. Getting tips and tricks from more experienced builders.

It is an old kit that I used different techniques on.

It may well be, but the more I look at it, it appears to me (if you have no other plans for it) you could practice some of your diorama techniques on a small scale. Deflate the tyres by applying a heated old knife blade to the bottom. Then put it in a severely overgrown setting with moss on the window sills, plants growing through the rust holes, creepers climbing over it, nearly submerged in long grass, last years fallen leaves wind-blown in the interior. Lastly, add a small furry creature in or on it for the “cute” factor: there are specialist after-market sets of Fluffy Bunnies and of Kittens but if you don’t want to go overboard there’s the hens and chicks in the Tamiya Livestock set… Just remember if you put the hens and chicks inside and the cockerel posing on the roof, add a reasonable amount of droppings (I had a friend who noted gallows and gibbets are rarely depicted that way, despite having the old nickname of a “Crows Parliament” from the flying scavengers that gathered there for a free snack). If you wanted to go the full “Guano Encrusted” look MiniArt do a box of three dozen (!) pigeons (I suspect they have - or had - some intention of doing their “Old Bill” bus as a WW1 mobile pigeon loft), just remember someone will criticise you for a badly-done winter camouflage whitewash…

P.S. I forgot to mention there are lots of “inspirational” photos on the web, both the real thing and in model form (there’s a guy whose done a series of over twenty such scenes, I just can’t remember where I saw them).

Gotta say you nailed it! The rust holes may have stared out as puncture damage of some sort that went rusty, so OK in my book. Years ago I worked a project in upstate NY where our accommodation house had a dead VW in the back yard that was just like your model, but with flat tires…