I finally gave the adding of ballast to the rails a go. Now I am contemplating whether to weather it or not, and if so, how and what to use…

Do you have any useful advice? 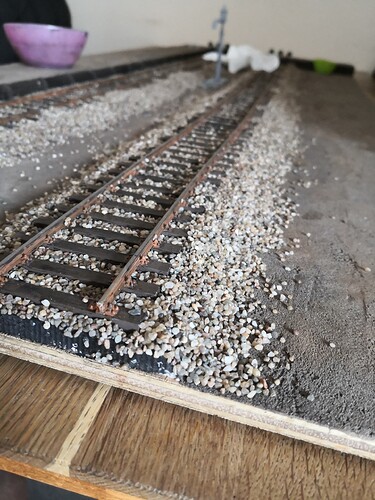 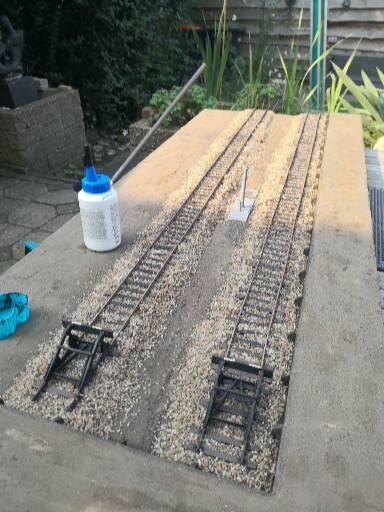 First of all you need to decide what these short sections of track have experienced since the last time they got new gravel (the rocks are a bit large to my taste but never mind …).
Only used to park the occasional wagon?
Parking for some oil-dripping and/or soot, coal and ash spilling engine?
Freshly put in place/re-graveled or left on its own for many years?
How much oil, soot, coal, dirt have gotten on those nice new rocks. Have various weeds and small trees started growing?

Airbrushing would be my choice, light dustings followed by thick layers where engines and axle bearings have dripped oil for decades.

Thanks for your support and helping to think along…
Since there is that water crane, they would have been used by steam engines for sure, but geneally steam engines don’t leak ashes, as that is contained in the firebox…
Sooth: well, yes, in combination with dirty steam. Maybe a bit of sand, but only in the winter. How loing would that remain next to the tracks??? Grease/oil would be only present next to the tracks, I guess…
I wasn’t going down the path of much vegetation as the areas seemed pretty clean then (we discussed this earlier), except for some grass around the watercrane (which leaked quit a lot of water, it seems).

Steam engines can drop coal dust, especially if they have take on coal just before.
Oil is always dropping. The Swedish state owned railroad company noticed that there was an
increase wear on wheels and tracks after the last steam engines were taken out of operation.
The solution was to have automatic grease dispensers, don’t remember if they were on the rolling stock or the tracks, but the purpose was to add a small lump of grease which the wheels would then spread along the tracks.
When I built (club layout) an iron ore offloading (train to ship) railyard I started by airbrushing dark brown (brown/black) rust on the sides of the rails. Low angle, airbrush tip barely above one rail when spraying the other rail. Then a brownish black at 90 degrees angle “down” on the track to colour in the sleepers and the gravel. The sleepers will have a tar-brown colour unless covered with oil. The gravel will usually take on a brownish tint, dripping oil and oily steam spray (yes there is oil in the steam that leaks from cylinders and pistons) can darken the colour. The base colour depends on where the sand or gravel came from.

One more thing: The water thingy was often by the track that the train passed on.
Nobody wants to pull a train into a dead end track, get water and then back out again.
The depots would have the water thingy by the track leading to/from the engine sheds.
I think they filled coal before entering the shed, water was definitely filled before entering.
Ashes were probably dumped before entering.
The next crew wants to take over a filled and cleaned engine. The engine shed crew which
could be keeping the furnace hot to avoid cooling/heating cycles would also want filled
tanks and bunkers. It takes time to heat a steam engine with care to avoid problems so
a lot of time is saved by keeping them hot. That is the reason for engine sheds having smoke stacks, the engine gets parked with the smoke stack under the smoke collector hood.

@Robin_Nilsson, Great detailed information.
Once you decide on the general degree of look, I use a pump sprayer to color ballast with water based acrylics. And it’s ok to get it on the tracks as well to get a sort of uniform weathered coloration of the area. Any unwanted build up of color can be soaked up with a clean brush or sponge.

This is how a secure the gravel bits with diluted PVA or wood PVA anyway. Pump spray is very low pressure and can be applied all over the top using gravity to land it all on your model.

@Robin_Nilsson Once again thanks for you help… I indeed will go the path of sooth/coal dust/oil/grease along the rail side.
I’ve read that in the Brtitsh railway companies, they had cleaners which not only cleaned the pipes and smoke boxes, but also removed the gunk from the wheels…

The rails themselves have been rusted nicely as is, I think ,as are the sleepers. I painted them raw umber, with a black/brown smudge down the center of the sleepers… That smudge needs to go down on the central gravel too.

As for the water crane, I know it probably wouldn’t have been there, but I opted to add it anyway to give some variation to the layout…

@kosprueone I used a syringe to add the diluted pva between the sleepers etc, as this gives me a high level of control… 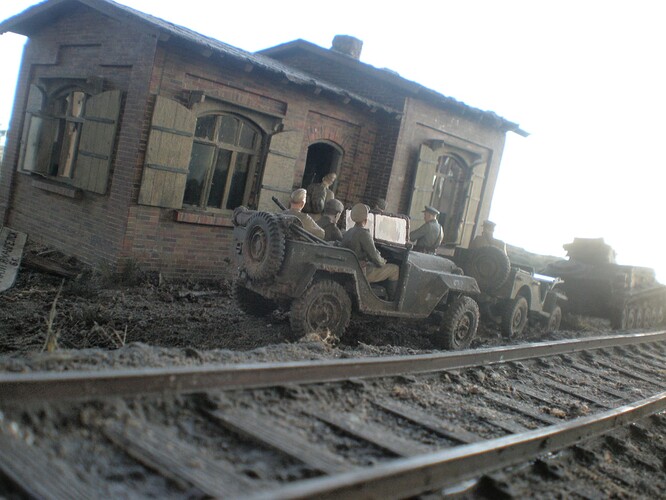 I sieved a load of dirty sandy garden soil, mixed it with dilute PVA to make a paste, used a flat bristle brush to push it between the sleepers & outside the rails – it dried solid. That was the entire ballast content (half a bucket) with dirt-shades of dry powder paint wafted over it while still damp to unify sleepers & ballast & cover any sheen. When dry it was surprisingly easy to brush away unwanted ballast from rails & sleepers without leaving a mark. Maybe you could do a more dilute/runny mixture over what you’ve already done? (Sorry for photo-bomb but maybe the image is slightly more convincing than the description)

Hi Erwin, I’m finding this thread extremely useful. As you know, I’m roughly on a parallel track. Thank’s for posting!

I have a general question: Right around the fall of Germany. How well would have main rail lines, sidings, and spurs been maintained? I guess that’s a three-part question. I’m assuming that manpower and rail operations were extremely limited due to continual allied bombing raids.

Tracks subjected to the constant bombardment of various soot and oil compounds from coal fired steam engines had a reduced growth rate for weeds. The occasional blast of steam also stunted the growth of weeds.

Here is an alternative ballast example. As you can tell I am more of a “branch line, dirty rail yard ballast” kind of guy than a mainline white/gray sort of fellow. (Modeler’s artistic license used here.) 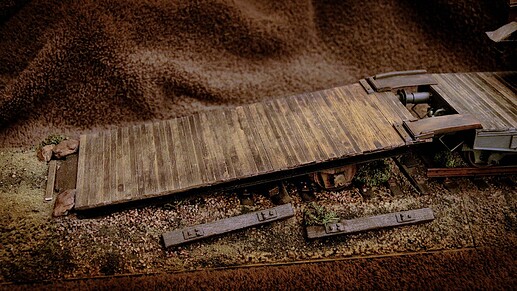 Swedish mainline, the outside tracks were laid in 1998 - 1999,
don’t know if they have been re-ballasted since then but I don’t think so.
Mostly electric power, some diesel engines, a couple of museum steam
engines have travelled the center tracks. 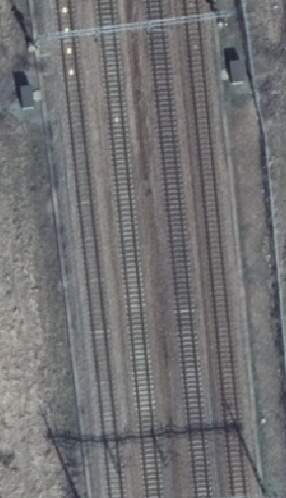 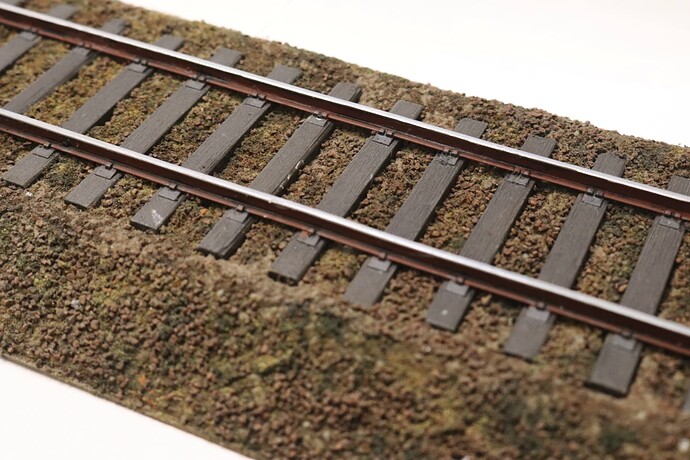 This is weird. I’ve never seen this thread before when I browse from my PC, but browser on my phone, it’s right there in the Forefront.