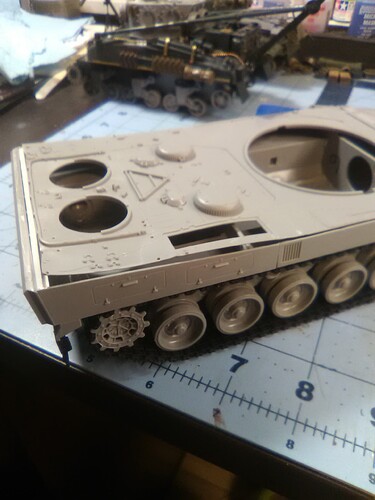 16683951644536676361991920×2560 225 KB
So bought this kit merely to support the local hobby shop… And it was relatively inexpensive, Revell’s Leopard 2 A6/A6NL kit ,#03281. Should have known better, smh. The top deck, if you will, out of the box was horribly warped both from side to side and fore and aft
I had toss the receipt a long time ago so I thought let’s try the old hot water trick and clamp it to a 2x4 (actually the width matched that closely). Lesson 1- when choosing the pot don’t tell the wife what your up to with their nice cookware regardless of the fact your just heating up water. Lesson 2- when dipping and holding the piece in the hot water take care not too bump the bottom of the pot like I did! While I straightened the majority of the warpage I inadvertently damaged and curled the deck plates on the rear corners. Lesson 3- always go with a bigger pot.

Anyways itll be a good test to see how well I can repair it. I’m just aiming for good enough to make it passable and a good old camo net will be the ticket to cover the rear seam if I can’t quite pull it off. First shim in place, need them on the sides now running to about their bulkhead that they supplied. Plan is to gradually build up the shims to make the putty minimal. Not sure about the corners yet. Still mulling over how to flatten and work them flush.

It’ll either end up as a passable repair or to the old paint booth as a mule. Still muttering to myself “should have pulled out the chili pot”.

Anyways I thought I’d share to get a chuckle out of a few of you guys. Honestly I thought “how hard can it be, pot, boiling water, warped part? I got this”

Ouch commiserations Chris, whoever said “The road to hell is paved with good intentions” wasn’t kidding. I guess you’ve discounted it as a wreck…might it be possible to cut/scratch-replace the worst section with Evergreen? You’re probably right to cover it in camo net anyway, but it might still be a handy test of your proven model-making chops. Now there’s an easy challenge, nothing to lose & all to gain

One trick I have used is to glue thicker styrene sheet at a 90 degree angle to the insides of warped pieces to get a big joint to keep them straight. I have used pieces cut from broken CD-cases.
In this case you may need to cut notches in the angles that holds the sides.
CD-cases also contain almost 90 degree angles which can be used to provide wider surfaces for the glue to grip.

Thank you for that tip. Now I have some useful bits, but, what to do with busted up discs?

Around here the owners of fruit trees hang them in the trees to (hopefully, no harm in trying) scare away the birds from the fruit …

That is interesting. But, here in Texas, doing that generally means that one is a communist.

Humans are the only animals that act against their own instincts. Probably why we’re in the shape we’re in.

I don’t know that this is limited to humans. One might consider the Polar bear or it’s cousin, the hamster. These seem to have an instinct that leads to the consumption of their own kind.

It can be saved.

Just set it aside and wait for the next “Sci-Fi What If? Campaign” and then you can kitbash, modify, or Sci-Fi it and cover the warped deck with spare parts, plating, styrene, or scratchbuilding—and throw accuracy out the window. Make it a hovertank, a WW2 1946 tank, a tank with Sci-Fi gizmos, an Alternate Universe tank, or whatever your imagination and finances dream up. That gap can be covered if you Sci-Fi it.

That is what I did with AMT’s Star Trek Danube-class Runabout that someone gave me in a huge box of free spare parts. He just gave me the forward half minus fuselage, warp engines, clear polystyrene windows, and everything else in the kit. I made it into a Sci-Fi gun turret many years ago. 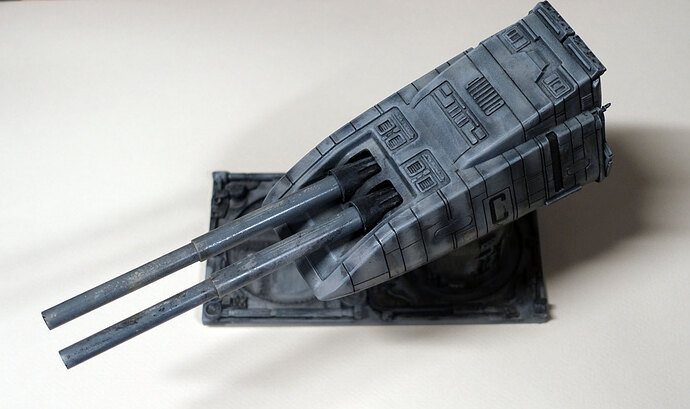 Chris your whimsical recounting was fun to read, not enough humor here sometimes . . . . I would say this is a prime candidate for a test range target, a good specimen to practice your rusting hulk painting skills

I can just imagine the deliberation over “what’re you gonna do with my pot?”

Againcajun–Glad to bring some humor. I’ve been staring at it and thinking I may try cutting out the rear section outboard of the radiator fans. While I lose some handles and odd bits the tools that are located there my hide the difference plus I can taper them a bit easier in a smaller chunk. Still debating, might need a little gin to convince me on this course of action.

Tank 1812, I’d almost consider that if I could locate and engine and transmission or some engine compartment interiors. There’s several panels I could cut out and leave ‘blown open’ as well just going w the remaining warpage. Still on the fence but I’m glad you guys got a good chuckle out of this. Sometimes we should share happy mistakes to lighten the mood and prove we’re human.

Tank, curious. Would the engine had been stripped out and basically an empty hull dragged out there to get peppered? I’m not sure I feel like wasting a lot of good gin now that I reviewed that other post about the Range dio. Maybe do this as a recent addition to the range w a few hits but otherwise somewhat intact. Outside of tools missing what else to omit to get the right feel? One could leave the additional armor on to observe it’s effectiveness correct? Thinking I’ll move on the turret and check on your feedback later.

The road to hell is paved in good intention, and trashed Revell kits.

There is a resin engine and engine bay, I think the Leopard Shop sells it.
Ken

So bought this kit merely to support the local hobby shop

Did you get it at Central Hobbies? Before the internet I used to drive up to Billings from Sheridan and go there and Jim’s Junction.

Yes Harv! Central for all my Tamiya stash, Mission Models paint and glue etc. Jim’s for the more 'exotic stuff’s, he has RMF, Meng, AFV, Trumpter kits of interest and Tamiya paint. Used to work in car sales so built my modest stash from those two shops w cash bonuses on the weekends. Jim does mostly trains so good supply of Evergreen, Grantline and some nice speciality bits. Great shops, glad I have them to support. but i do the online bit for all the other stuff tgey can’t get or don’t carry (PE etc).

I always enjoyed going to both of them. I guess there used to be another shop called Viking Hobbies, or something like that, located out by the Metra somewhere. It was closed by the time I heard of it. Anyway, a Billings trip wasn’t complete without at least hitting Central Hobbies.

So I travel east Montana, Williston and the North strip of Wyoming (Sheridan. Gillette down to Riverton and west to Cody) and haven’t found any other hobby shops so I count myself fortunate to have these guys so close. Plenty of gaming type shops scattered around but they are the only ones w kits.