Sigh. I should know better. I really should.

I a working on the Trumpeter 1/32 P-51B and decided I really needed to replace the cockpit. So I went with the Aires set. While it no doubt is a far better cockpit: 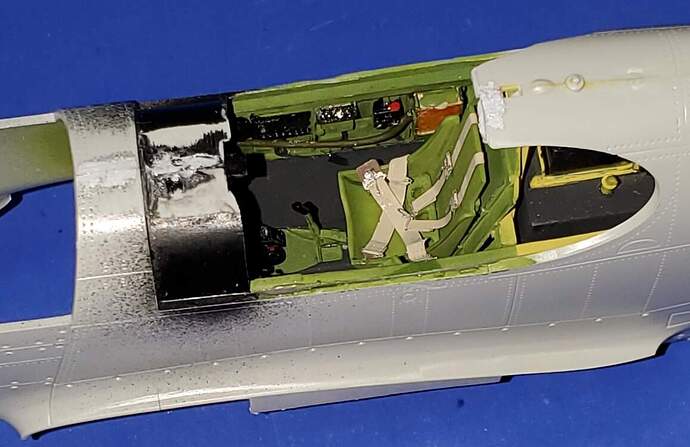 I’ll bet you can guess what happened. 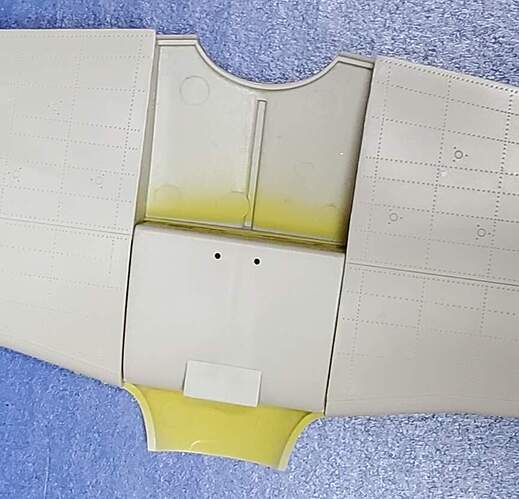 I’m guessing I’m going to be sanding the fuselage wing roots. Now, that’s a pain to do. I’ll have to be slow and steady and try very hard indeed to be even on both sides. Not really looking forward to it. So, I thought I’d ask the wizards here if they have any better ideas (short of cutting the wing apart). Any takers?

All I can say is good luck Michael.

Tape the wing assembly to the fuselage underside and kerf the wing / fillet joints with a razor saw until you can induce the proper dihedral . I can get you the specs if needed . On the old site I had to prove to a naysayer that Tamiya’s 1/48 Mustangs had sufficient (actually slightly too much ) dihedral when he claimed they were too flat .
LMK if you need the specs .
Cheers- Richard

Thanks Richard. I thought of cutting but am sure I’ll take too much. Not that there’s going to need to be some serious seam cleanup regardless of how I do it. But after getting over my initial disgust and looking at it closely, I don’t think that I’m going to need to do that much after all. It seems to all be on the rear half of the root. We shall see…

And thanks for the offer of the specs. I have some pretty good references to check against, so I should be good there.

You “proved it” with a photo that was not even LEVEL with the fuselage centerline to begin with. It was deeply nose down… Since it is a photo that you made, why did you choose such an angle?

Then you used a piece of paper and laid it on top of the wings, at the nose down angle, as if that demonstrated anything, since we cannot see the wing top dihedral, as it is not level with the lens, at least not at the angle that YOU chose…

Even if your kit turns out to be correct, that simply means you put in the effort to modify it. This does not mean the Tamiya kit builds soundly as is.

Not having this kit anymore, I could not find or make perfectly centered photos, but I did find photos where the wing thickness, and fuselage axis, was at least somewhat LEVEL with the center of the lens.

Incidentally, Eduard, Meng, and Airfix all got the dihedral in the ballpark, and are very close to each other…

The Tamiya dihedral is also mostly correct empty, but too flat with the cockpit pushing out the fuselage sides, and in turn the wingtips down, exactly as is happening with the OP on his model.

This is a fuselage LEVEL photo of a kit that demonstrate the issue, with fuselage
LEVEL photo of real aircrafts. Even if not symmetrical, the issue should be obvious, in an actual build by some third party not involved in making a point: 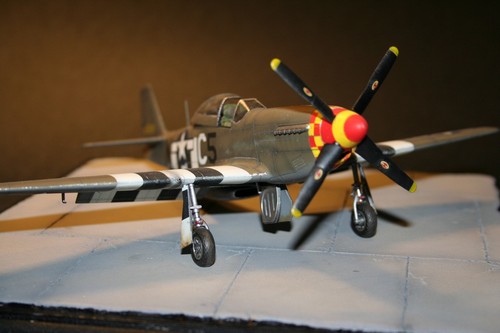 This a long distance shot by the way, but let me guess, we don’t know the focal length so we can’t conclude anything about any of this, right?

Isn’t it funny how all these different photos, especially from faraway, generally, tend to tell a roughly similar story? 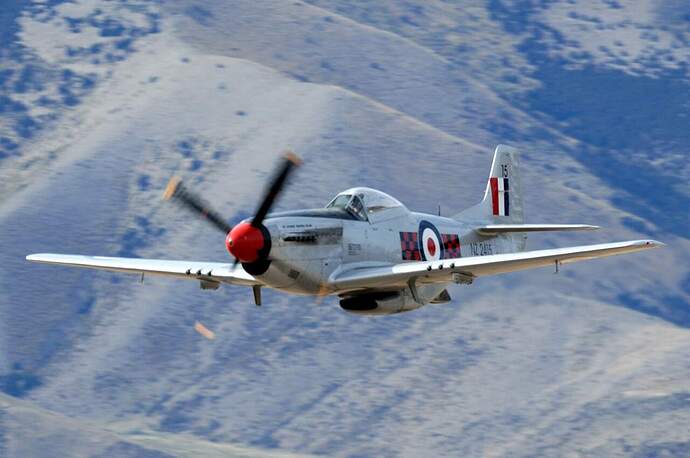 Because the P-51D’s leading edges are deeply swept, any photo not showing clearly the wing thickness head-on will give the wrong impression as to the dihedral. The photos I could find, not spending hours, at least get this basic factor right.

Although I have never seen in person a Tamiya 1/48 P-51 kit built with the dihedral corrected, that does not mean some builders did not succeed. I found it surprisingly difficult, to the point of ruining my build.

Compared to the 3 new kits by Meng, Airfix and Eduard, the Tamiya is very obsolete anyway. I will only point to the width of the nose top, the tapered prop blades, and the shallow windscreen sides as examples of what has been corrected in most of the newer kits. I am building all 3 to make up my mind, but only with Eduard windscreens on all 3, and Meng or Airfix sliding hoods on all 3, because of their correct thicker sliding frames compared to Eduard.

Dihedral is a more sensitive issue on the P-51 than on most other WWII types, because the fuselage sides are very tall and very flat, yet the fuselage is narrow and filled with an unusual mass of internal items (in kit form I mean). Most other WWII fighters have much rounder fuselages, which are made of two semi-circles, and semi-circles are less prone to being “swelled” by internals than a tall narrow rectangle… That explains why this problem is easily aggravated by After-Market resin cockpits that require a bit of extra strain to close the fuselage.

Don’t tolerate any fuselage closure effort on any of your P-51 builds… If you need tape to close the seams, there is a good chance you are asking for dihedral troubles…

Hopefully this will prove generally useful to P-51 builders out there, at least those for who Tamiya (and others) can indeed do wrong.

Look at the template and the fit to the top surface of the wing … perspective has no bearing on this provided that the fit of the template to the wing can be adequately seen, which I believe it can . My purpose on posting the link to the archived post was so that Michael could glean the dihedral specs from the Mustang book .