Does anyone know if there is a 1/35 model of a Bison APC in styrene (or resin)? Or will I have to get a LAV 25 then do some scratch building? Reading up on it it dosent seem like to hard a conversion. I really wanna build this kit cuz I fell in love with this photo! 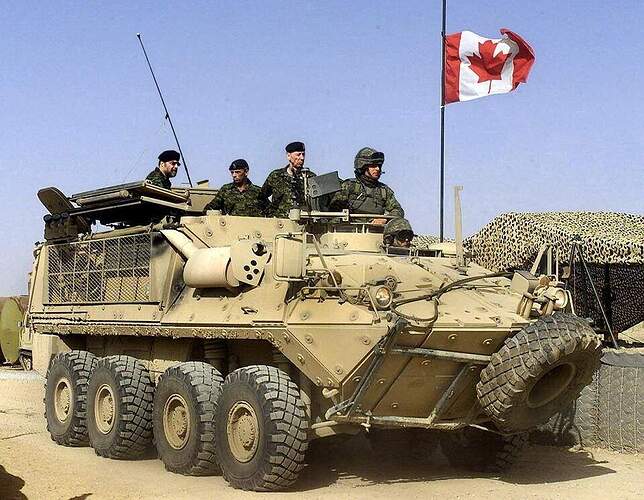 By starting with a basic LAV-25, the Bison design process took only 7 days. The Bison differs from the baseline LAV-25 by raising the height of the roof, removing the turret ring, placing a commander’s cupola behind the driver, and incorporating a rail mount system in the cargo/passenger compartment to quickly change mission specific equipment. The driver is seated in the front-left of the crew compartment. The commander has a slightly raised position directly behind the driver with access to his own hatch and mounted machine gun. The engine is to the right of the crew compartment.

Actually seems like a fairly complicated conversion… Maybe since the Bison is part of the Light Armoured Vehicle family with the Coyote Reconnaissance Vehicle and the Australian ASLAV I could take one of those kits and convert it? I dont know, Id love to hear what yall think.

i’ve been contemplating the same thing. for me the best start would be the ASLAV. I’ve heard some say using the roof from the Italeri Mortar Lav gives the correct roof hatches.

Maybe Trumpies LAV-C2. It looks alot more like one of those. (No turret/ring, similar upper hull shape).

I’ll check it out.

ASLAV PC is a good starting point. Proper rear hatch and door. The LAV-M does have the proper size upper hatches, so it’s a multi-kit bash. The ASLAV PC hull is close, but still needs changing.

Im looking into starting this build when I finish my Grizz so thanks for the info!

That’s my Former CO riding in back. behind the Crew Commander.