I realized i posted this one in the wrong section ,so here it is again in the appropriate section . 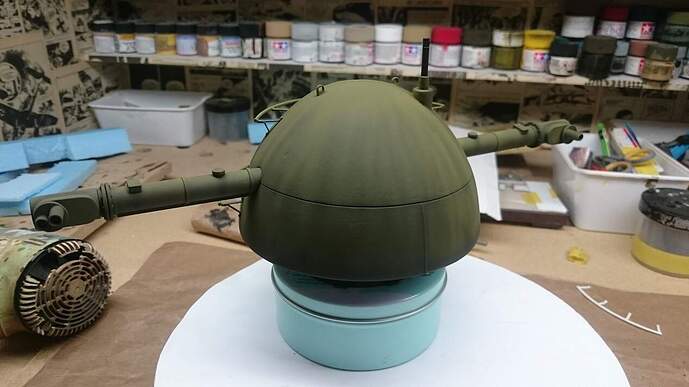 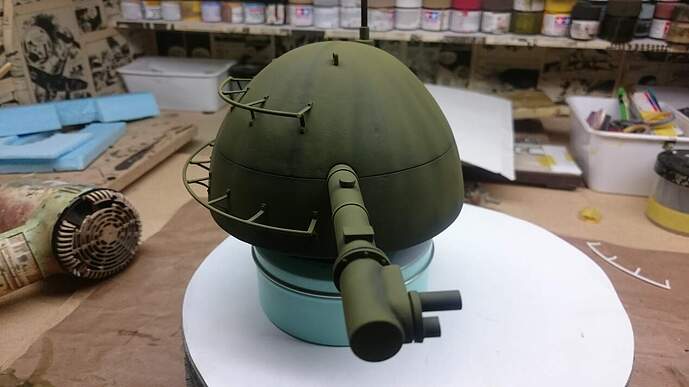 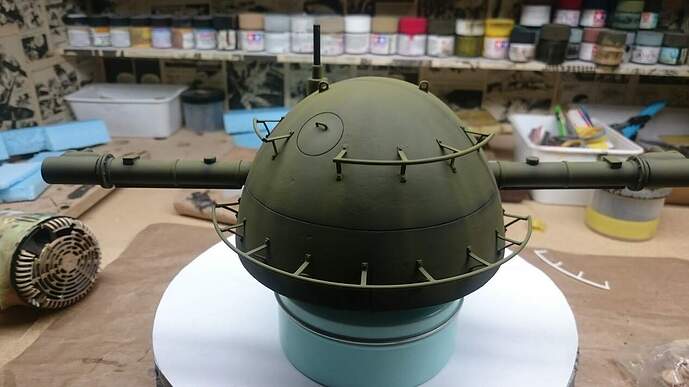 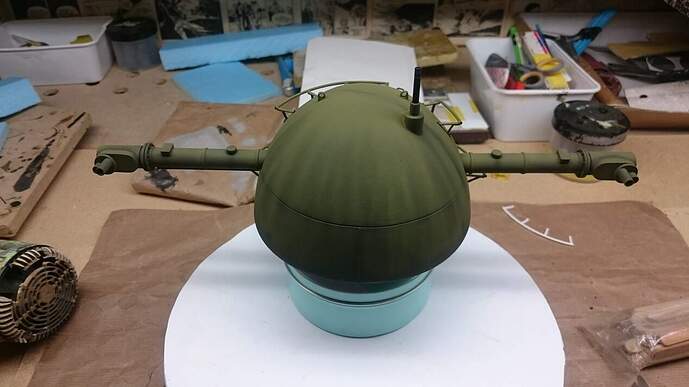 I deleted my progress pics by mistake …
The dome was turned on a lathe from a big block of resin i prepared earlier.
The rest is evergreen plastic.
It is 95% done . 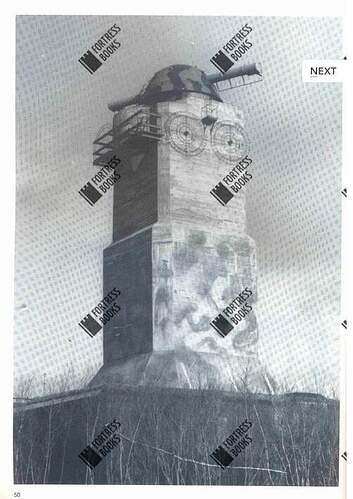 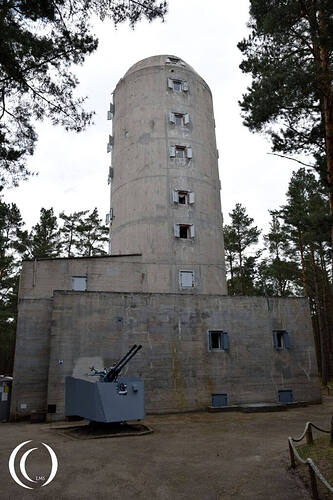 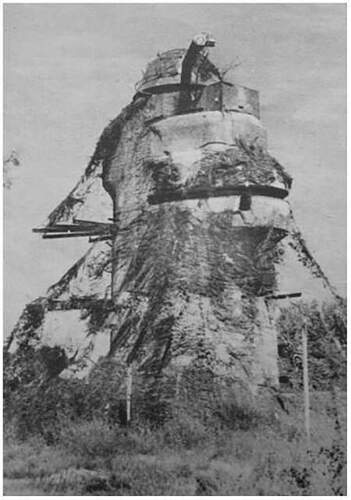 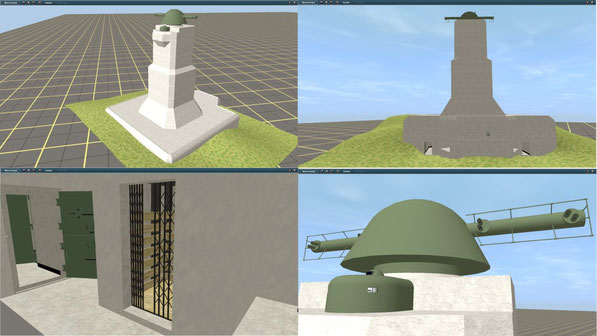 Geez range-finder I was looking for a scale-finder – if this is 1:35 that dome must be about …THIS BIG! That’s monstrous! And brilliant! But wait…I hear distant sirens…they seem to be coming from the direction of your Lang Vei PT-76/Bunker in the Diorama forum…

I hear them to ,but can’t be bothered at the moment…i dont feel like painting figures at the moment
I prefer building and airbrushing .

Great idea and it looks really good. Once it’s on the partial bunker that will really add to it and show it’s size off… Will you be able to have s figure or some equipment near it so people understand it’s size ?

Wow! Another cool project!
There is never a shortage of innovation on this forum,
J

Wow… I did not realize it was that BIG !!

If i place it on a tower like in the first and last picture, it is approx. 82 + cm tall in 1/35 scale
(including the bunker below it )
But it would look way cool and fun to build, we will see …

German 28cm gun turret ,i have good drawings for this type so it was an easy build.
The photos might not capture it well ,but all the bolts have a square hole in the middle,this was the only tedious job of the build . 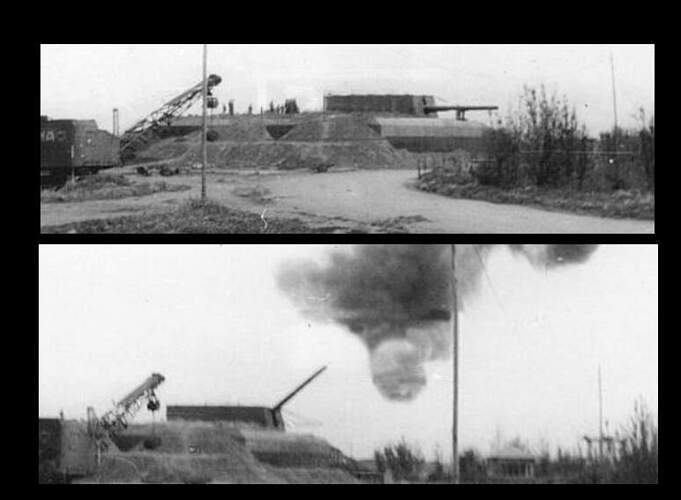 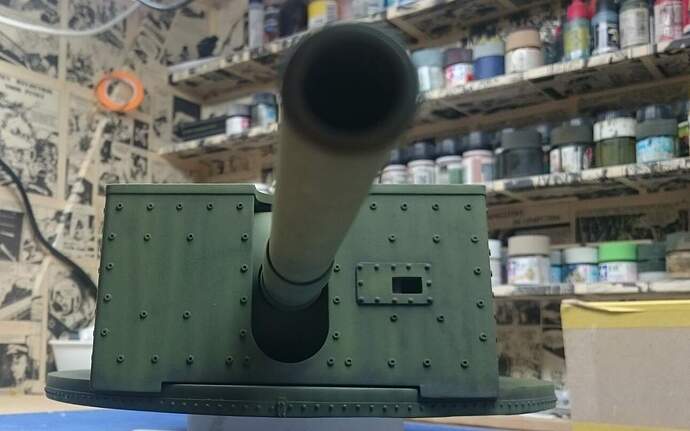 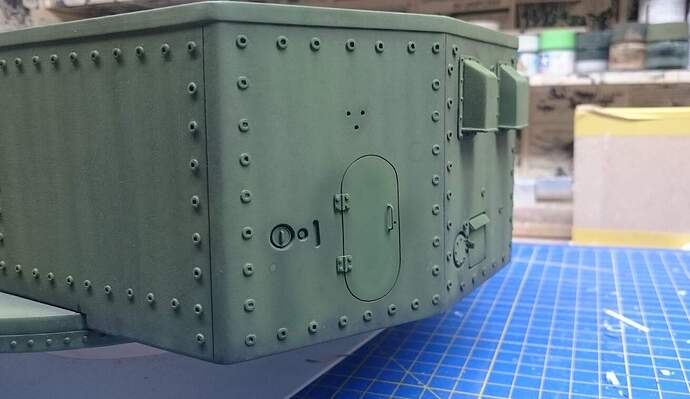 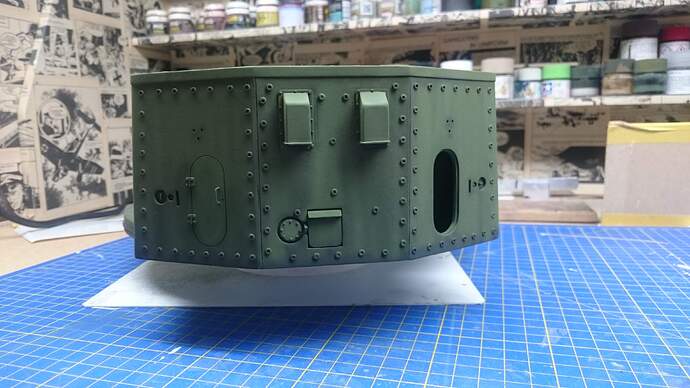 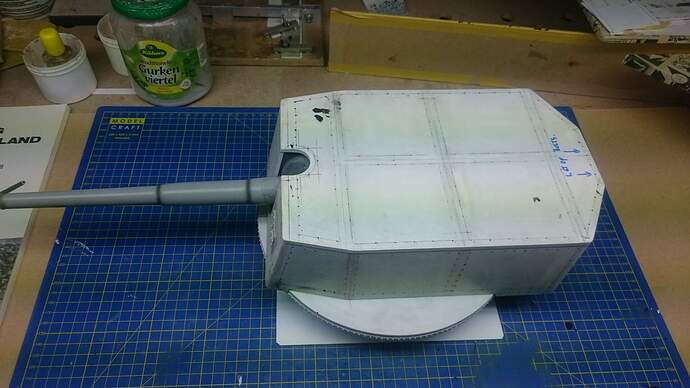 Looks great and the turret fade and streaking look lovely… All those bolts had squares inserted … I feel for you… That must of been painful… How did you do them …they look great btw.

It’s very easy … but it takes time due to the drying time of the putty.
Got some Evergreen tube that I sawed 0.75 slices from (I made a jig to do that)
Glue them to the model and fill the holes with 2-part putty, then press a small square rod into the putty.
let each side harden separately and sand them .
Why ?
Otherwise the putty will be pressed flat while you handel the model
It is the drying time that made it a boring task .

Wow! I was only joking when I suggested the whole Lindemann battery! This just looks superb.

Ah, Grosser Kurfurst. A long term project of mine too, which I resurrected recently after working out how to do those bolts (3D print them!). You’ve got much further than I though (I have a barrel but the rest is still in CAD).

And do you have any drawings of the turret itself? I’ve been working from the ones in the 1945 Withers report but they are more about the bunker structure and the draughtsman made an error in the turret plan view drawing in that the angled front plates can’t be as drawn.

Yours looks rather splendid, as does the rangefinder. I don’t have much on that as the Withers plans again mostly cover the concrete part of the BCP.

…and if ever a modelmaker earned the descriptor “BDE” you are he!

I went with a similar hard edge camo pattern. 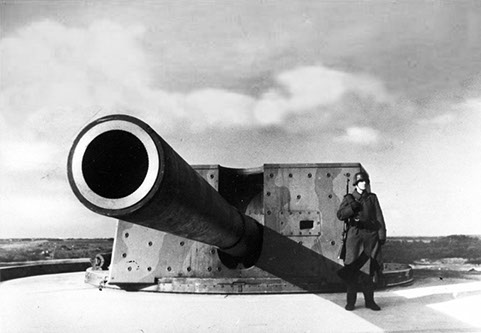 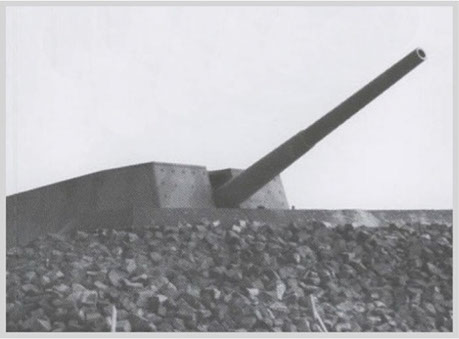 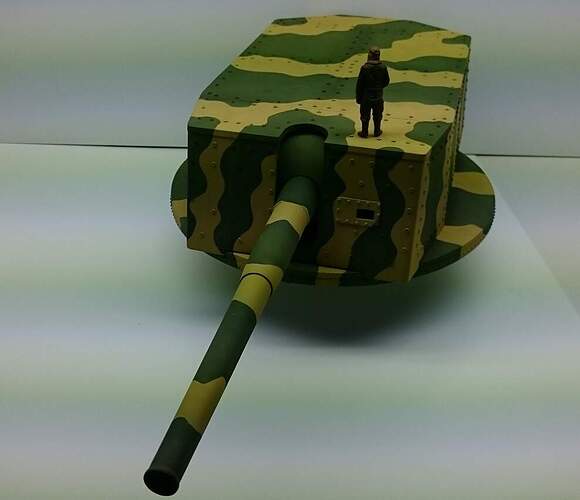 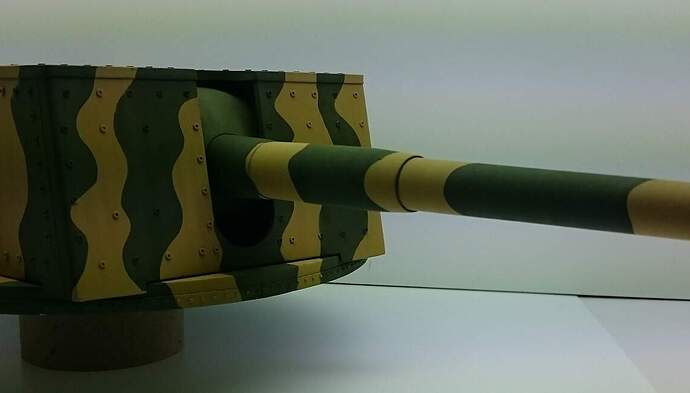 Most impressive. You mentioned having drawings of the turret, which interests me as I have only limited turret detail. I’m having to piece it together from a few incomplete views and with bolt spacing from the Scharnhorst. Would you be willing to share any of your data?

I have indications that there are more of those domed bolts round the top of the circular base but the photo looks modern so I’m not sure if it’s the same design (it clearly isn’t Grosser Kurfurst as the turrets from there are long scrapped).

I was told mine is not from the grosser Grosser Kurfurst battery .
It is from Festung Hoek van Holland in the Netherlands also long gone.
The (not period ) drawing… i borrowed from a fellow modeller, so there not mine to share .

Your right about the domed bolts on top of the circular base.(will ad some ) 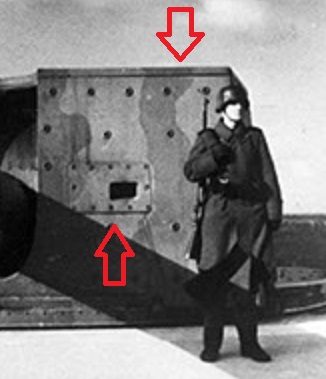 As you can see the kurfurst turret(s) are completly different to the Hoek van Holland ones ,
Pics are in this book . 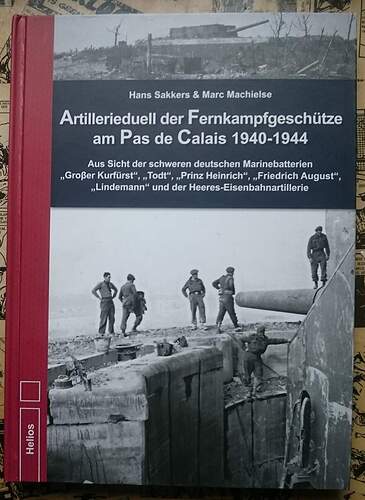 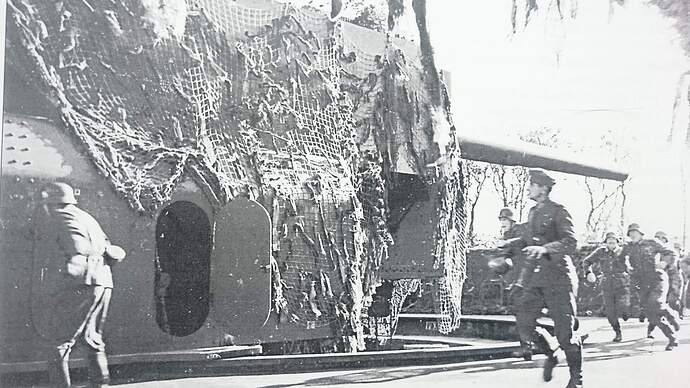 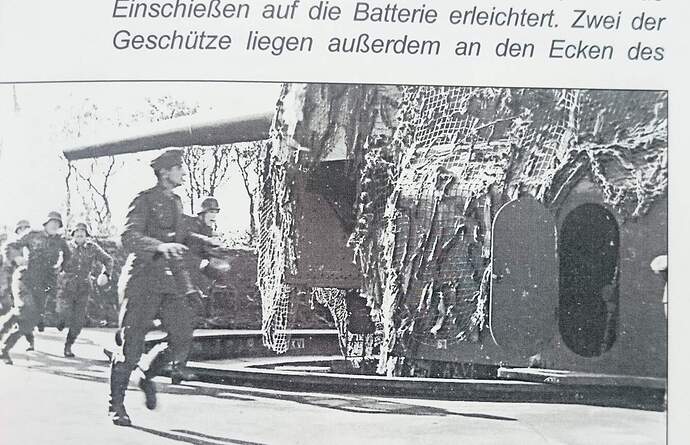 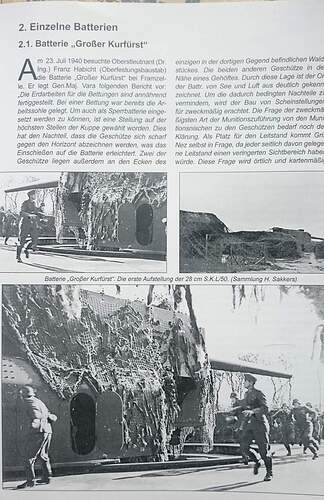