These first five are recreations using M35A2 trucks. You can tell by the larger, NATO turn signals (on “Business As Usual”) and extended exhaust stacks on the right front side. I don’t know if they are based on actual trucks or not. These are actual M35A1 guntrucks in Vietnam. 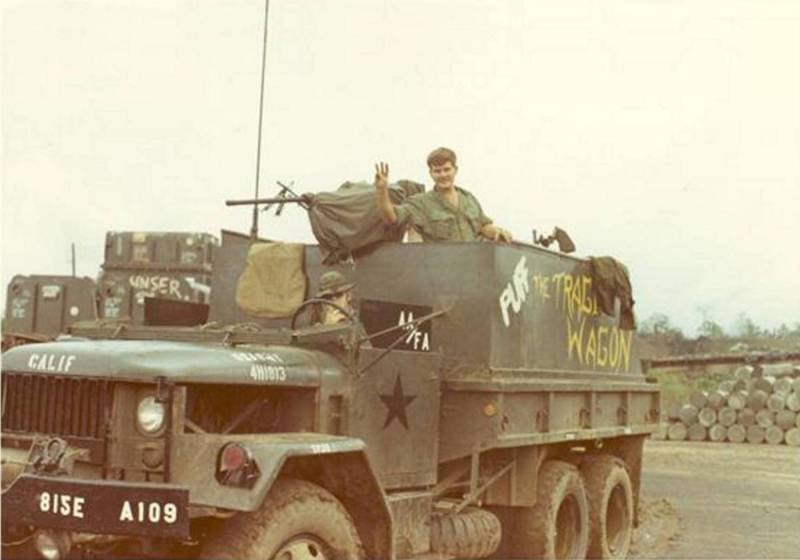 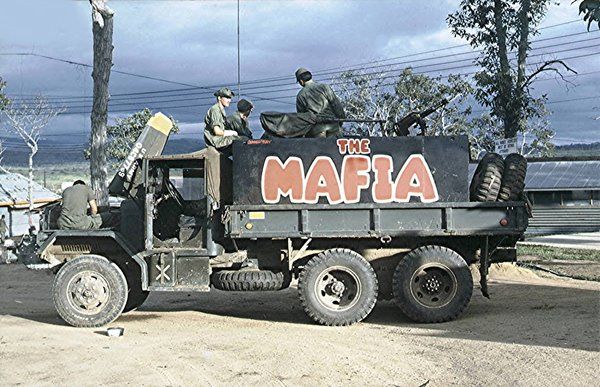 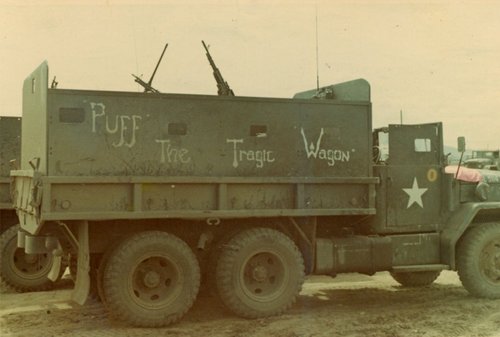 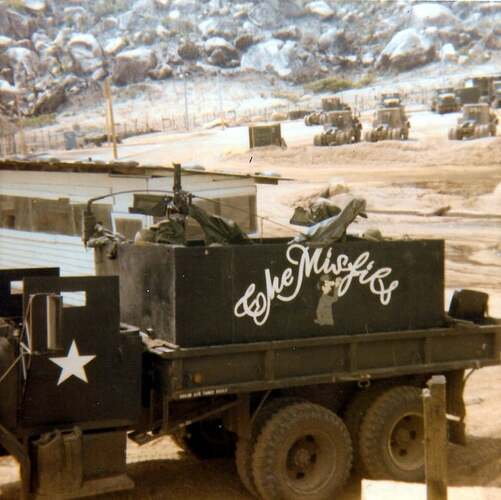 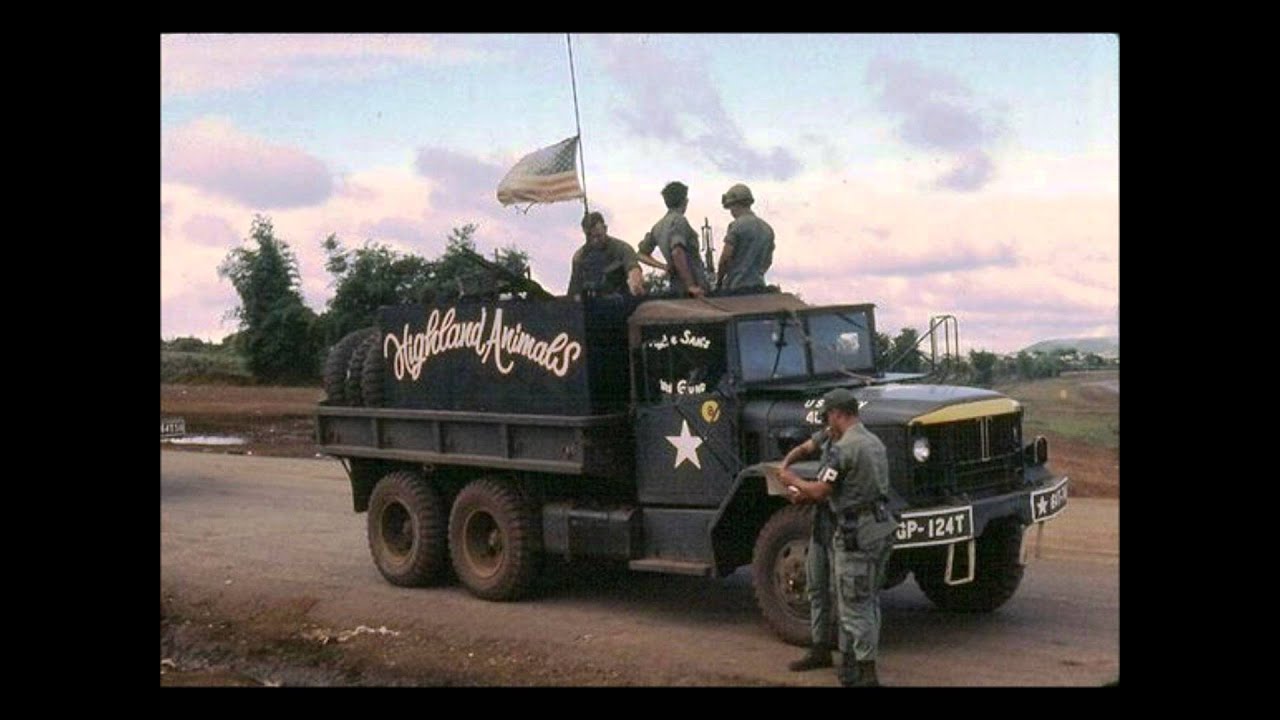 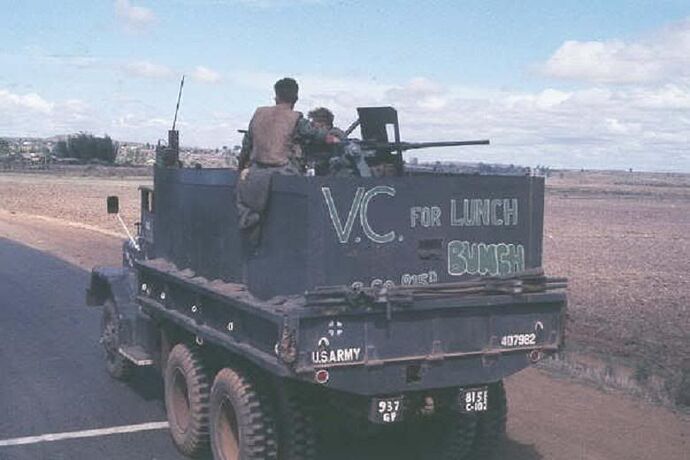 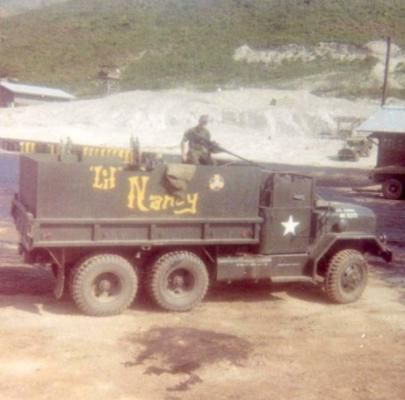 Thanks Gino!
A lot of good choices here… I might base mine off the Iron butterfly truck.

Also, another thing AFV Club missed is filling in the hole on the right front fender. It is only there on an M35A2 where the exhaust comes up through the fender. On M35A1s, the exhaust goes back along the frame and exits between the rear wheels on the right side. AFV Club depicts the M35A1 exhaust correctly.

Ok, Ill keep the in mind when I get farther along. Im currently looking for the Legend 1/35 Gun Truck Conversion Set as it has some parts I need that I cant scratch build. Or I might use the main body and just modify it a bit.

Ezra, I have the Hobby Fan M55 kit (mounting the M45 quad on the M20 trailer became the M55)
I only need the turret if you still want to build your kit as Nancy. 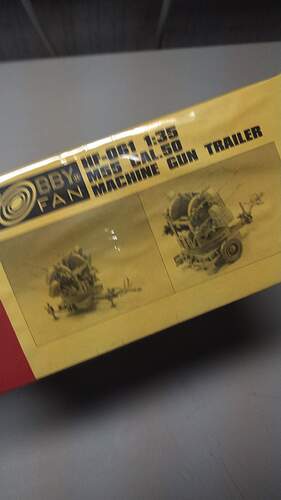 Mind you, the trailer is all in resin and not plastic if that matters to you. 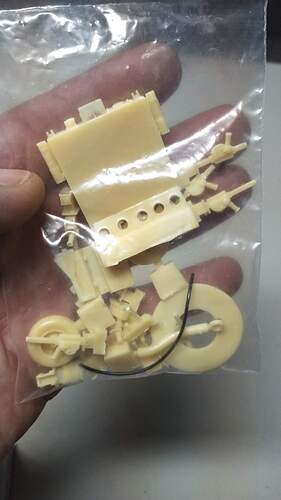 Talking about “Nancy” and other Quad 50’s guntrucks, I’ve always wondered if the mount included in AFV Club kit is accurate for Vietnam. The AFV Club mount is the WW2 one, like this trailer mounted unit (M55) : 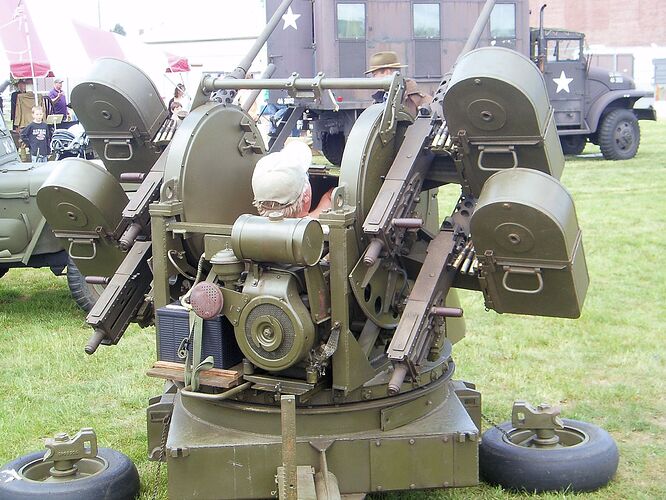 But AFAIK, the Quad 50’s mount used in Vietnam was this upgraded one : 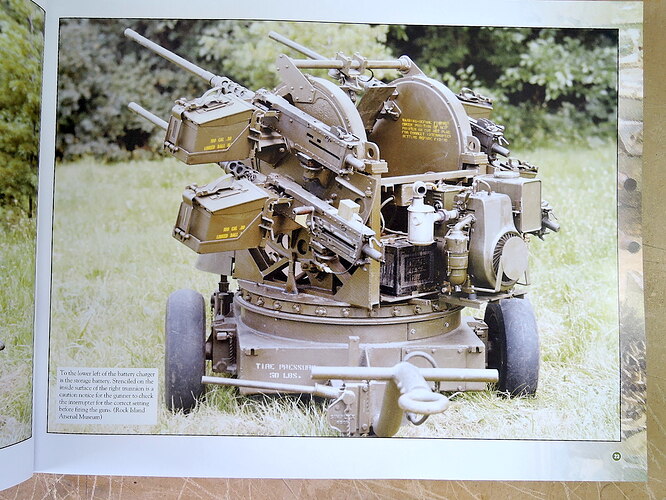 The generator engine is different, and so is its fuel tank. In most pics I’ve seen, there’s also a (electric ?) box that looks similar to a 20mm ammo box size-wise fitted above the engine : 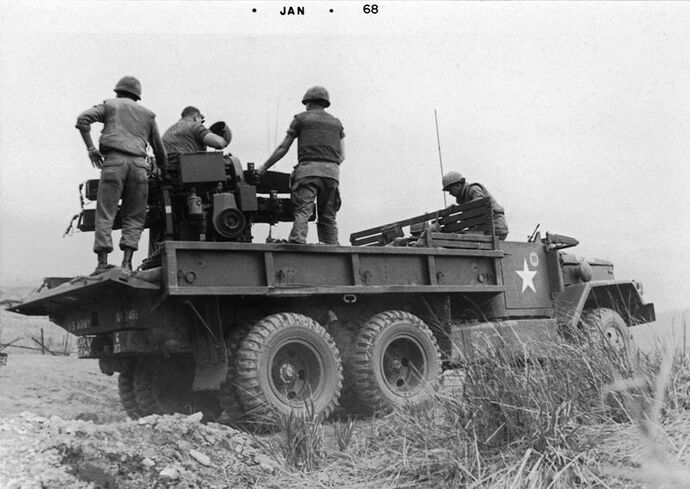 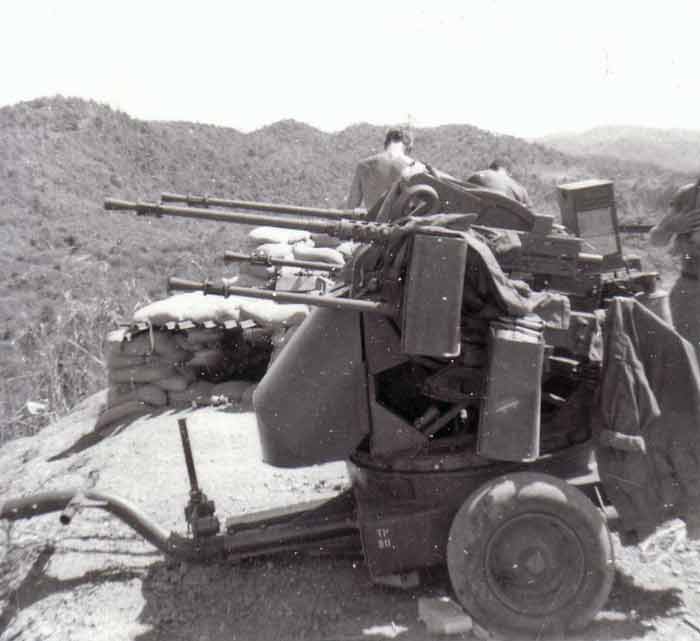 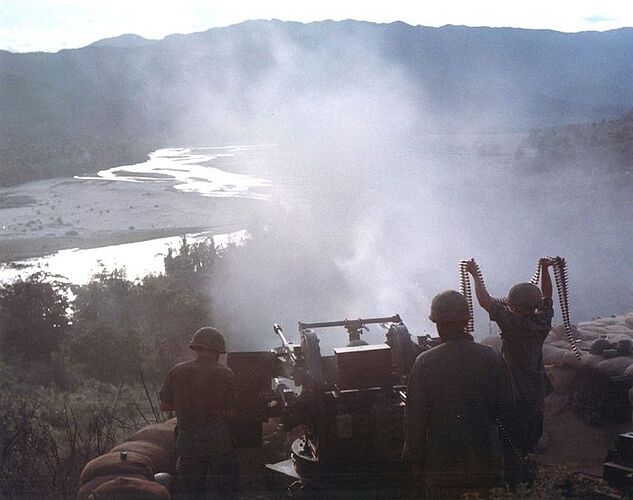 Sometimes this box is mounted longitudinally : 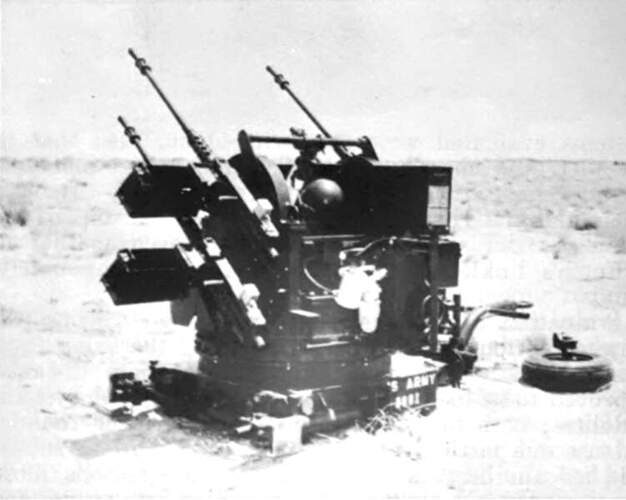 Soooo, in other words, was the WW2-style mount used in Vietnam ?

You are correct, as usual, Frenchy. The Vietnam version was technically an M55A1 with updated engine and fuel tank. I believe the ammo can was just a storage box though as not all had it. Some scratch work may be in order to update the quad .50 if you want a totally accurate Vietnam M55A1 mount.

Wow thanks Ken that would be awesome!

Gino would all the scratch work I have to do be updating the rear?

Gino would all the scratch work I have to do be updating the rear?

From what I can tell, yes. It looks as if it is a new engine, exhaust, air filter, and fuel tank. The rest looks the same as in the kit. With the rear armor plate that Nancy had, I’m not sure you can really see that area though. You may not need to update anything.

Just found a couple great references, with lots of pics, by the US Army Transportation Corps; Convoy Ambush Case Studies.

Vol 1 discusses and shows convoy ops and gun trucks in Korea and Vietnam.

Vol 2 discusses and shows convoy ops and gun trucks in Iraq and Afghanistan.

From what I can tell, yes. It looks as if it is a new engine, exhaust, air filter, and fuel tank. The rest looks the same as in the kit. With the armor plate than Nancy had, I’m not sure you can really see that area though. You may not need to update anything.

Yah its pretty hard to see behind there. I may just do some work on the ammo containers and wires like in the gun truck studios build.

Just found a couple great references, with lots of pics, by the US Army Transportation Corps;

Ooh sweet I’ll check them out.

). My guess about the electrical boxes (2 variants at least) is based on these pics that show ventilation louvers and a socket on the side… 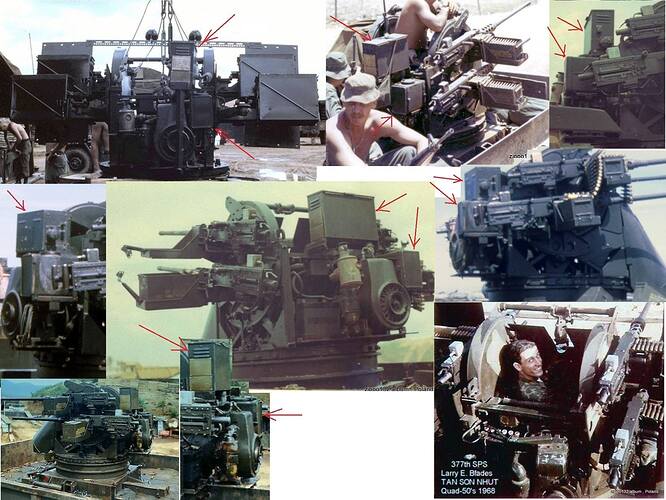 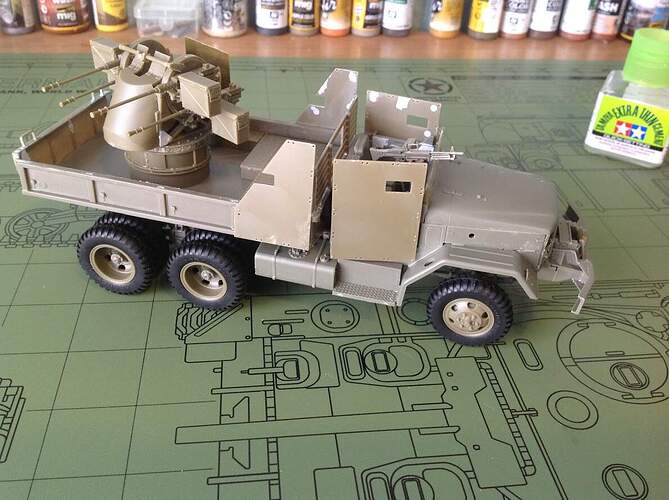 What they changed was the generator. In the 60’s they replaced the original generator with a larger, more powerful one. The turret rotates and elevates via the batteries, the generator keeps them charged.

To my recollection, the square box with vents and sockets that @Frenchy mentioned is something added by the units themselves as you’ll sometimes see they aren’t all identical, and they are for communicating with the gunner. When they mounted the M45 in the WWII M16’s, there was communication between the gunner and driver/commander, this was how they made that possible with the M55

To use the airborne trailer @Panzer_modeler you’ll need to remove those two large drums it’s sitting on, just below the band of large bolts

the photo of the one still on the trailer looks like it was the one on the south side of LZ West; maybe two hundred yards from the very western tip. The guy with his back turned to us is named Mueler, and I went to high school wit him. The gun looks like it just arrived, and the trailer was gone when I got there in December 68. That ridge line in front of it, is on the north side of LZ Sooner in the valley base. As dry as it looks, that probably was taken in September or August. We used the bunker to the left of the gun, and there was a 106 recoilless rifle to our left. It was a very long and boring 29 days up there with the 101st on an operation to the north west of the place. Half the guys got rat bit, and two thirds had walking pneumonia, but it was above the rain. Notice those great big ammo cans I told you about.

West was the most rat infested place I ever saw. We killed a three gallon bucket full from dusk till dawn every night. It was cold up there in January, and the cloud banks would roll in making you wet as if it rained. When we got there a young LT. took us on a tour of the lower half, and bragged that it took a heavy weapons platoon over a day to get up there. What an idiot! They threw grenades at us that night, and that quad fifty couldn’t shoot at them because they couldn’t depress the guns enough to shoot. Really an incompetently ran mountain top once you looked around five minutes. Nobody ran the bunkers to the west end! Plus they were not very friendly folks either. 101st wasn’t slightly impressed with them either. Good thing was that it was raining like crazy a thousand feet below us.
gary

To use the airborne trailer @Panzer_modeler you’ll need to remove those two large drums it’s sitting on, just below the band of large bolts

Got it, that sounds pretty simple! 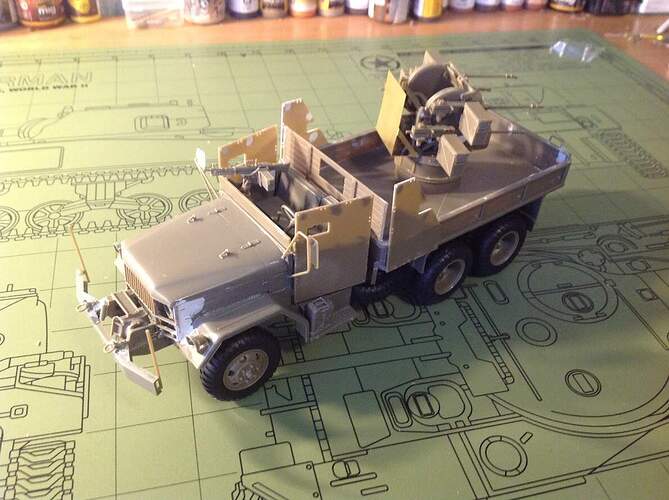 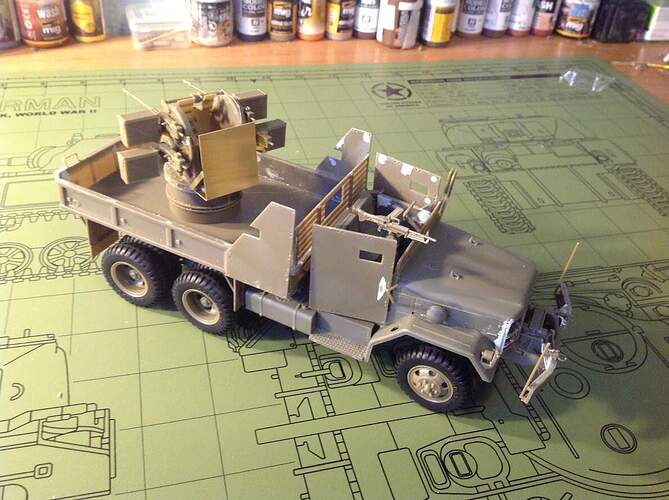 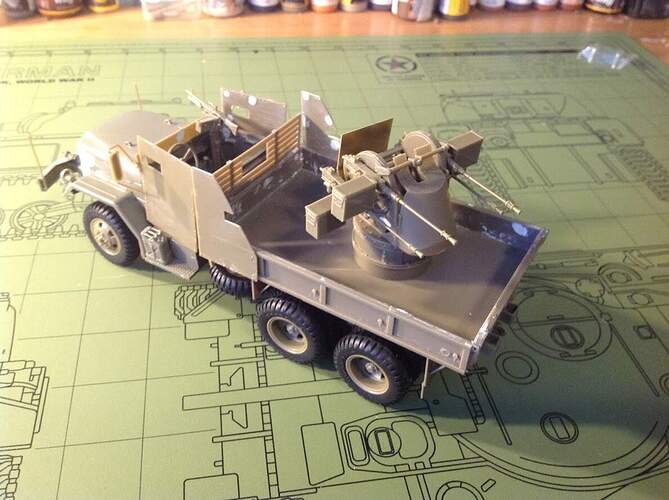 I just realized something… I have to fill the hole on the fender right?

I have to fill the hole on the fender right?

Correct, there should be no hole in the right front fender on an M35A1 in Vietnam (or anywhere else, for that matter).