Every modeler has a list of wish-kits. Some of those, especially the rare, hard-to-get ones, belong to the ‘Holy Grail’ category. For me, this is it.

When I was a kid, I’ve spent lot of time around crops-dusting airplanes (both fixed- and rotary-wings), including the Dromader. As a matter of fact, the M-18 might have allowed me to enter the history of aviation by making me one of the very few people that have flown the single-seater version as a passenger. I was around 10, when sitting on the lap of the pilot (a friend and colleague of my dad), flew back to the home base of the airplane after a day of spraying fields. Yeah, talk about bush-pilot mentality!
No wonder that this, as well as many other occasions of flying crops-dusting planes and helicopters played a significant role in my decision learning to fly airplanes myself.

The first, and so far the only large-scale kit of the Dromader, produced by Mr. Marek Wiezchowski from Poland, came out in 2008. As far as I know, it was produced in very limited numbers (around 50-60 if I can trust the German website where I’ve found the info). I was aware of the existence of kit, however, it’s high price and extremely limited availability have always put me off.

A few weeks ago, I wrote to Mr. Wiezchowski asking whether the kit was still in production. Unsurprisingly, he replied it wasn’t. A day after I’ve got another mail from him directing me to a Polish, Ebay-like website selling a single example I asked him whether it was safe to buy from. He said no worries as he knew the seller personally. I knew this is it. I had to get it, otherwise I might miss laying my hands on the last commercially available example of this kit in the known universe. About two weeks later it landed on my desk. Needless to say, I’ve never been happier to get a kit! 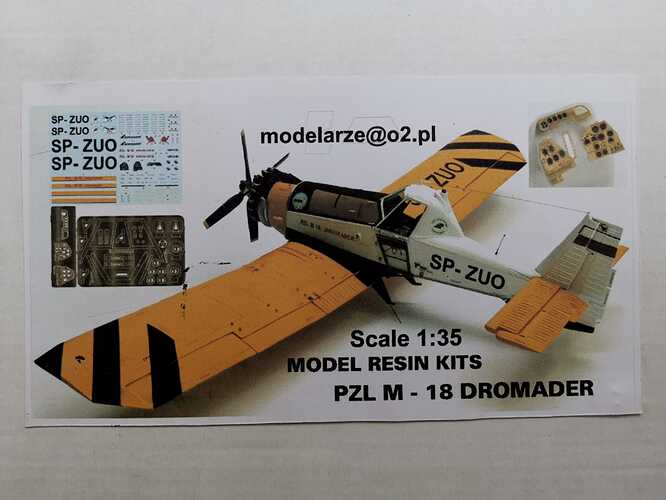 Gotta love it when a “Holy Grail” kit lands on your bench, wonderful stuff.

Even though there were a few dozen of these kits produced, it still made it on to Scalemates!
PZL-Mielec M-18 Dromader, Marek Wierzchowski CA35001 (2008) (scalemates.com)

Are you planning to build this one, or is it going to stay boxed up and untouched?

Are you planning to build this one, or is it going to stay boxed up and untouched?

Indeed, although I need to grow some balls before. The reason I’ve basically stopped building airplane models is because I had enough of filling, sanding and rescribing panel lines. This is true even for mainstream styrene models, let alone limited run resin kits which are nothing but constant struggle with those unpopular aspects of modeling.