Looking for any tips on where to find insignia decals for Vietnam era figures.

Welcome to the site.
I just tore the shrink wrap off of this set that I’ve had for years in the hope I could send you the decals from it. Unfortunately it doesn’t come with any. 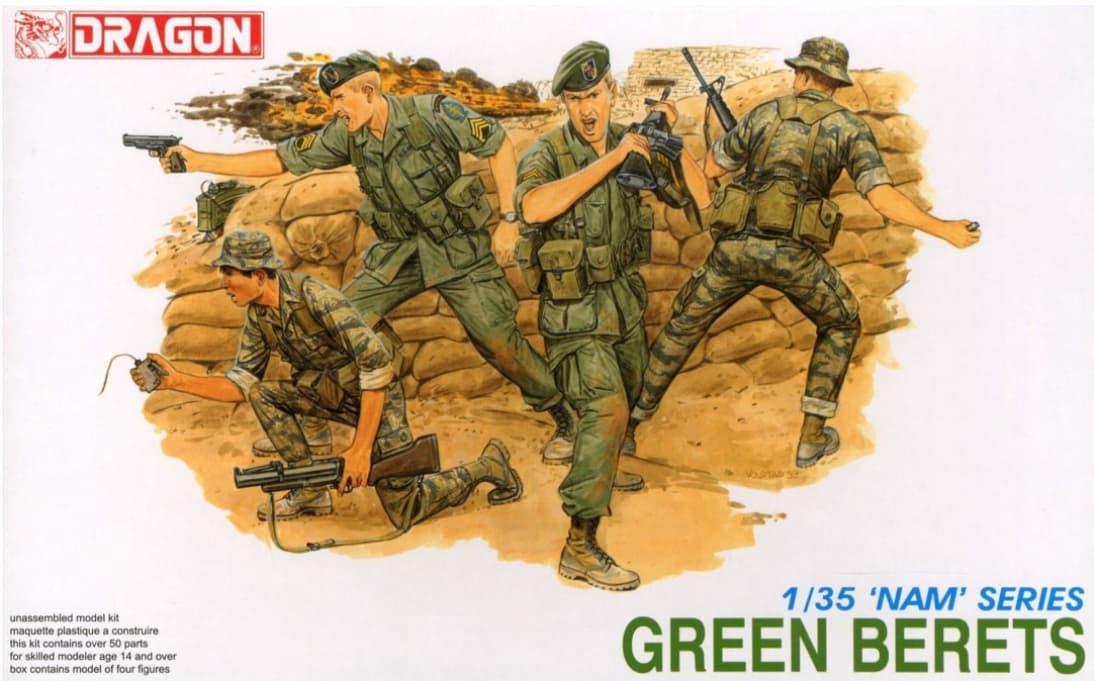 Neither does the Peddinghaus Vietnam set have any. I’m sure I’ve seen them though, although they may have been the modern subdued ones.

The good news is that the AIRBORNE tab is available in color. You can use that, and simply paint the arrowhead patch in teal blue, then add dagger and lightning bolts with yellow. in 1/35 they’ll just appear as tiny lines.
No need for the colored long tab as it was not authorized until 1983.

Thank you very much for the info, very helpful.

I think this is what you’re looking for…“Verlinden’s 1/35 U.S. Uniform Insignias.” They also come in 1/16th scale, I believe. 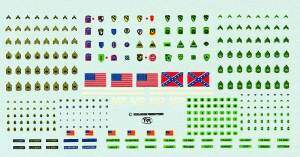 Some of the others can be useful, but there is no SF SSI in that set either. 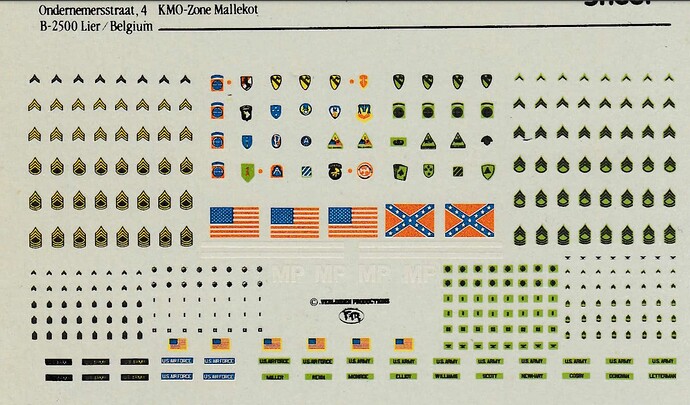 Thank you. I will check it out.
Appreciate the link.

Looks like Echelon FD offered some at one time: 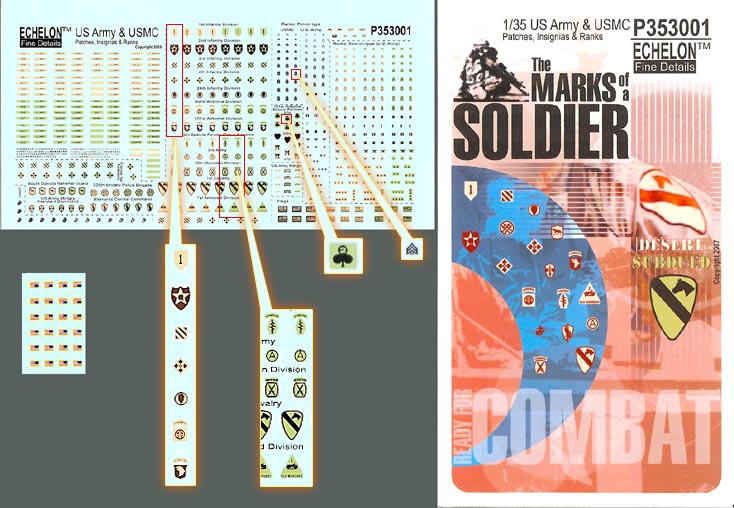 Difficult to tell from that image, but it looks as is the ones to the left are for subdued DCU’s, and the ones actually outlined, weird azz color though they may be, might be meant for the ACU’s, but even that doesn’t look right.
The trouble with the Army is every time they change cammo schemes the patch color changes as well: 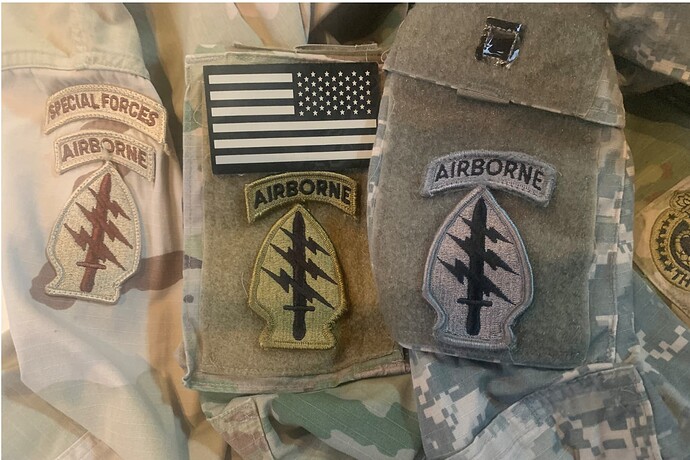 image1703×1136 190 KB
Without going launching an expedition into my attic (requiring moving several motorcycles out of the way) I would venture to say that the old patch color from my OG 107’s and my BDU’s isn’t quite the same as the current color. There’s probably a Sergeant Major running around like some German TÜV Bulle with a color chart trying to insure no one is trying to recycle one from decades ago. 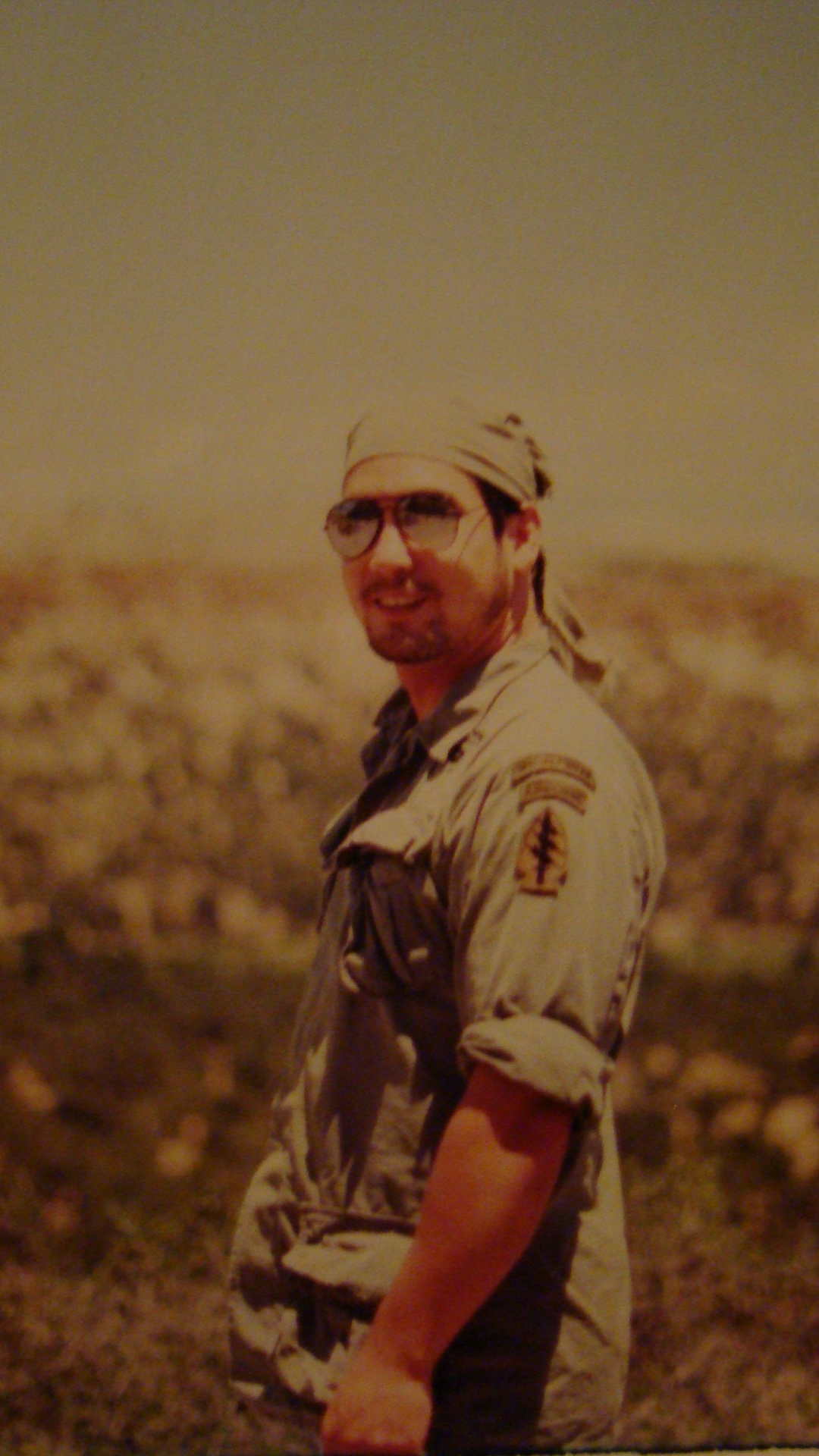 The Army started adding VELCRO to the patches to save the soldier money, but in the long run it ended up costing more. Plus, who wants to wear metal “I love me” badges? If you get the cloth ones sewn on, you have to have the name tapes, US Army tape, and rank sewn on as well.
jimb July 29, 2022, 8:39pm #10

You have motorcycles in your attic?

No, but probably enough parts, minus an engine, to build nearly another one.
The problem is the attic door is one of those fold down ladder types, and my chopper is situated right underneath it, with four other bikes that have to be removed from the garage (including one that is still pieces from when I purchased it a few months ago, in order to back the chopper enough to lower the door. Fortunately there’s another ladder in the house with no bikes underneath it, at least for now. (my wife has actually watched me change the oil on the Indian in the dining room when it was too hot to do so outside) The two different attic areas do not connect.