Hey everybody… Going to try to weather some soviet armor could definitely use some guidance! First off… Is the t55Am considered cold war or modern? Anyways here are some pictures. 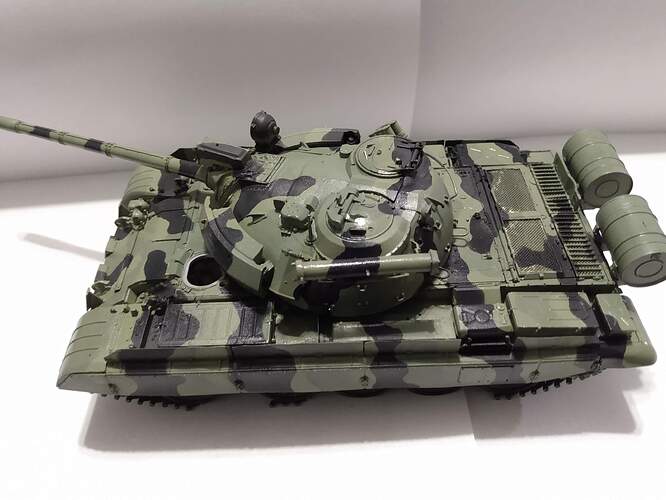 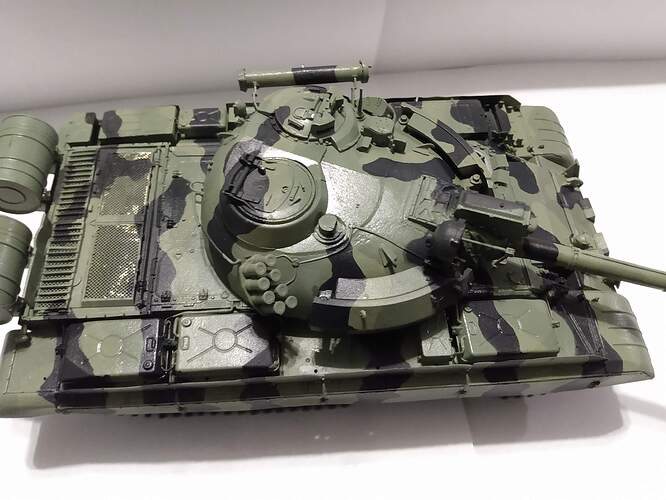 History wise, the T-55AM is definitely Cold War. But the site guidelines say Modern. Your choice. Personally I’d put it in the Cold War section.
It’s looking good so far. Which kit is this?

But they are still in use. Would make it possibly “modern”… depends on who’s operating it. T34 would be modern if its being used by the Yemanis in their civil war.

Thanks for the replies! I’m doing the Russian naval version so I guess it’s cold war… This is the takom t55am kit. It was a pretty fun build, the painting not so much! Haha anyways because it’s part of the navy, does this tank spend much time rolling around on the beach?

And thanks for the kit maker clarification. That looks good.

Edit- Soviet/Russian Naval Infantry, their version of a Marine Corps, forced entry from the sea. By the 80’s, they had developed a pretty robust amphibious warfare capability. So yes, it roll around on the beach, off, and inland to whatever objective.

Wow! Thank you guys for all the info! I guess this is posted in the wrong section… Oh well maybe next time I’ll get it haha… Anyways sorry for taking so long to post but I been busy experimenting with washes and filters but I can’t get it right… I can’t get the lighter green to pop out more… Does anybody have any suggestions? Right now just the turret is washed and filtered 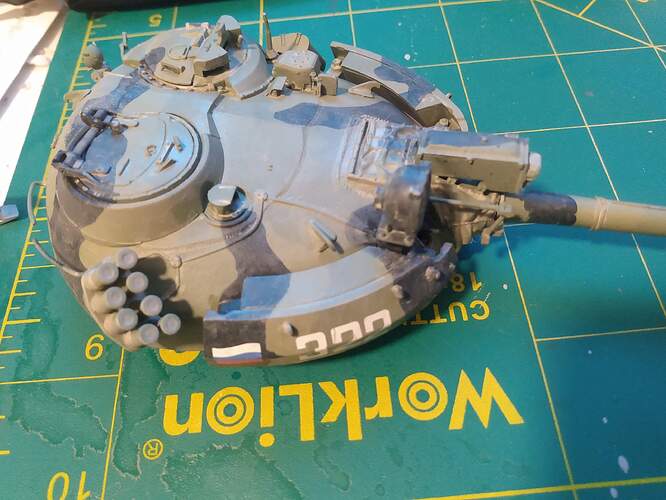 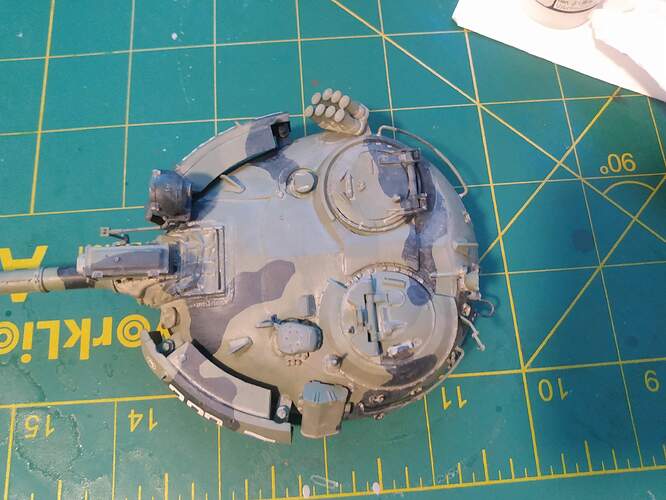 Try drybrushing to get it to pop more. Use brighter greens over the green areas and medium grays over the black area. Washes and such will just blend and tone the colors down.

I dried your dry brushing idea and dude I am horrible at dry brushing… So I ended up repainting all the light green areas. I applied a tan filter… But it stood out way to much do I applied a green filter. It actually came out awesome! Then I applied a dust wash… Don’t know what to think of it… 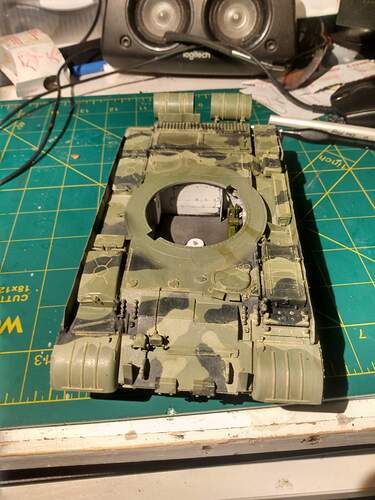 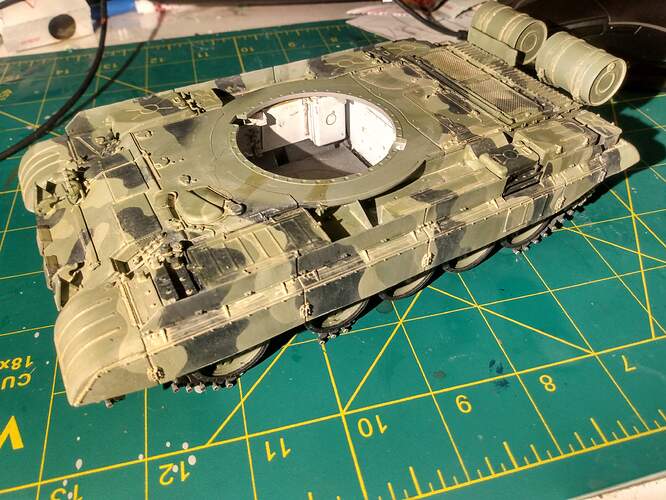 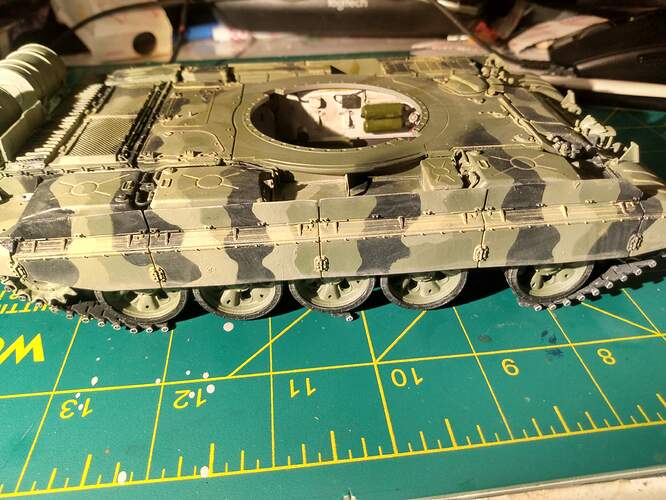 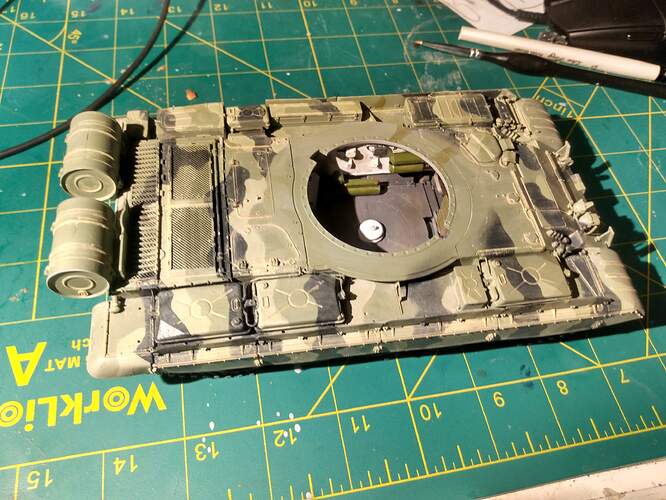 I think it all looks good. Everything blended together well with the washes and dry brushing.

Sorry for the long time to update!!! This thing has been nothing but bad luck!! When I glue one piece on 2 more fall off. When I was almost done I ended up dropping the fu$&en thing! So I finally got my self to put it together and here it is 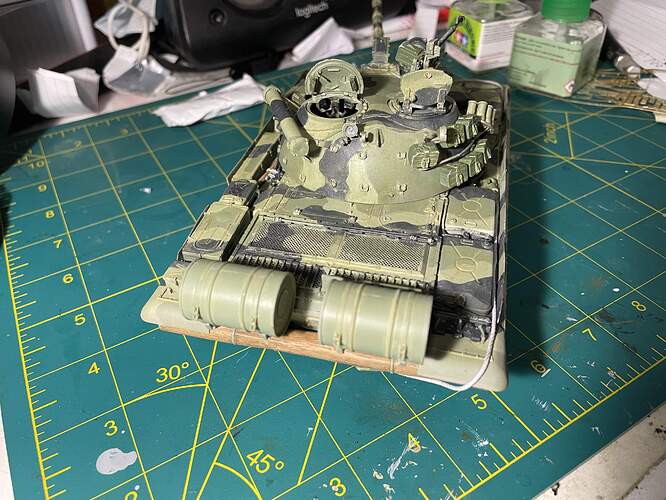 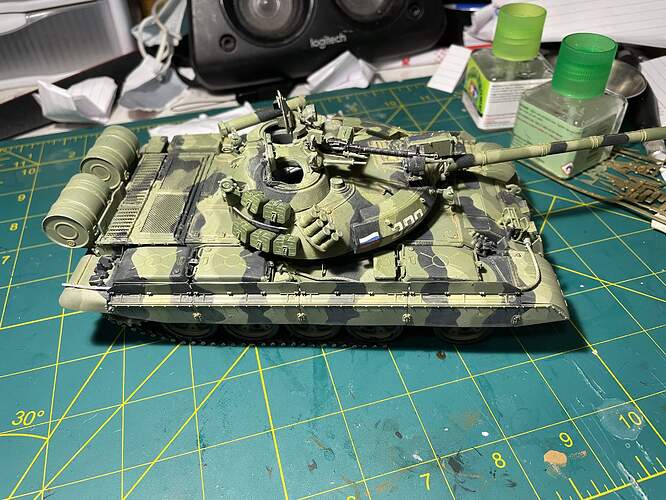 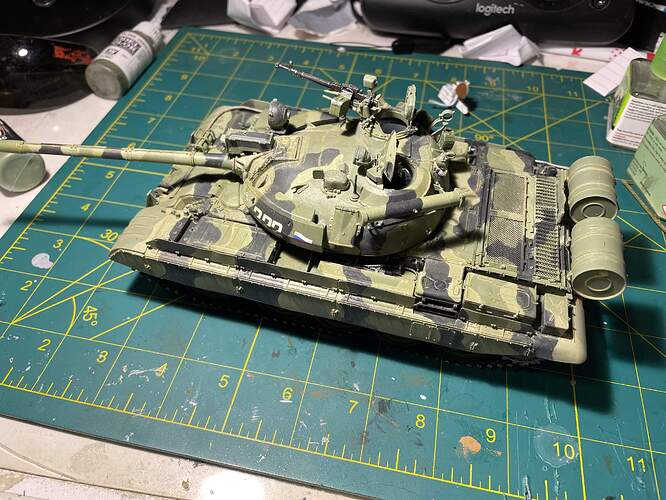 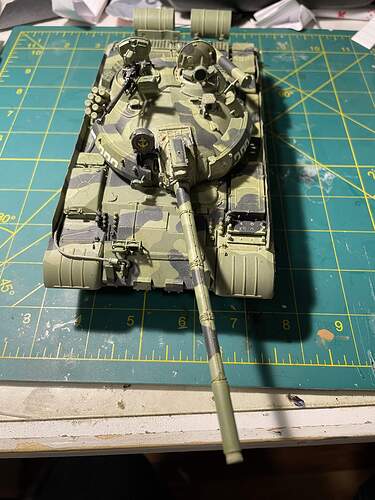 Now time for some minor paint chipping! Was Soviet armor taken well care of or was it neglected? Should the paint chips be like a dark steel or gray or something?

Try to do a two tone chipping. First lighten the shade of your basic color (green or dark gray) and do chipps and scratches. Then try to follow the pattern of your light chips doing smaller areas in those chips with a dark black brownish shade (I use a mix of gunmetal, black and dark brown 2:1:1). This way your chips will look more interesting, as if the paint faded first and then broke off.

Dont get too excited, work near hatches, moving parts and angles. Dont cover wide areas, small chips at a time.

Very nice model; I wouldn’t worry too much about chipping - it’s often overdone and the resultant finish, were they the real thing, look like they belong on a scrap heap.

Tanks are prime equipments and in most armies are well looked after. A bit of wear and tear around the hatches perhaps, or where feet have scuffed a lot (and I’ve seen a Challenger 2 where there was almost a chrome-like finish between the 2 hatches on the turret!) Russian Naval Infantry I’m sure would be a proud unit and take such pride in their equipments; also factor in how the Troop Sergeant would operate (or Russian equivalent) - he wouldn’t let kit get too scruffy I’m sure.

I want to thank everybody for the tips and comments! I’m not trying to make this tank look beat up or abandoned but I just want to try chipping and scratches. Right not I’m trying to use the tips and tricks everybody provided but nothing is really working. Once I start getting the desired effect I will post pictures! Thanks again for everything!

I’m fairly new to chipping but as the posted video states one thing I’ve found helpful is to use Vallejo paints for chipping. I’ve found it’s easy to get a bit heavi handed and have chips fall where too don’t want them or end up too blotchy. The nice thing about Vallejo is if you mess up a bit you can get a water wet brush and go over the chips and it will remove some of them giving a more natural chipping effect

Sorry for the really really long wait! I finished up a while ago and forgot to post pictures! Here they are 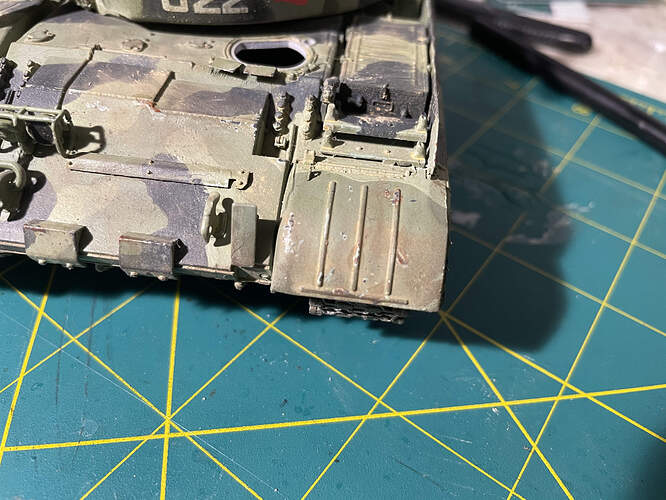 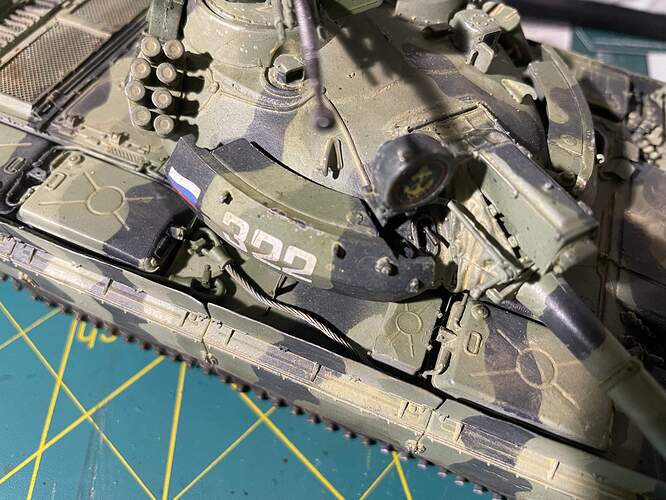 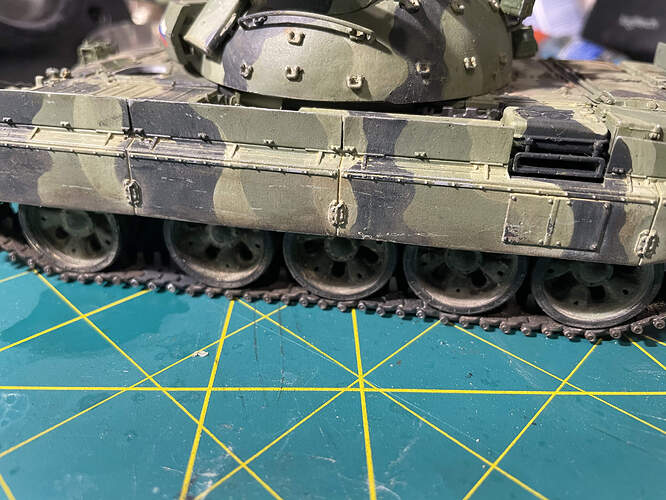 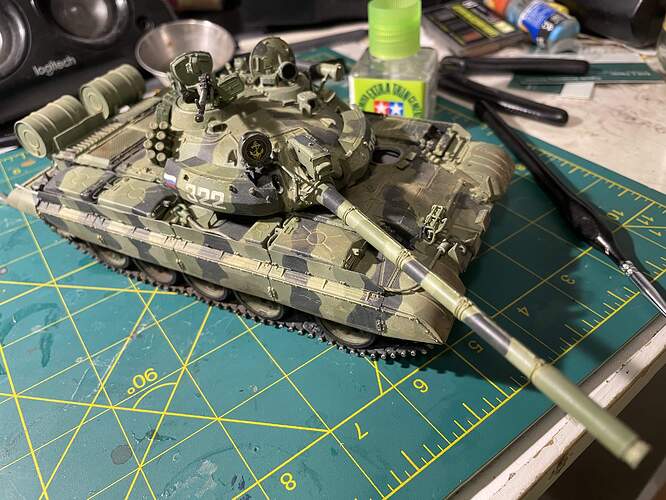 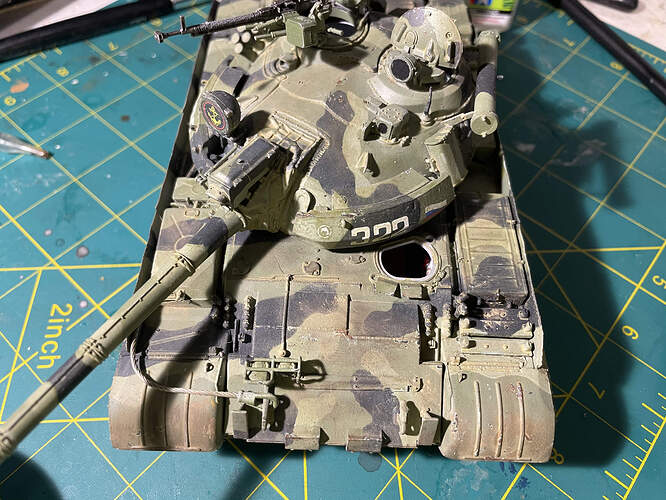 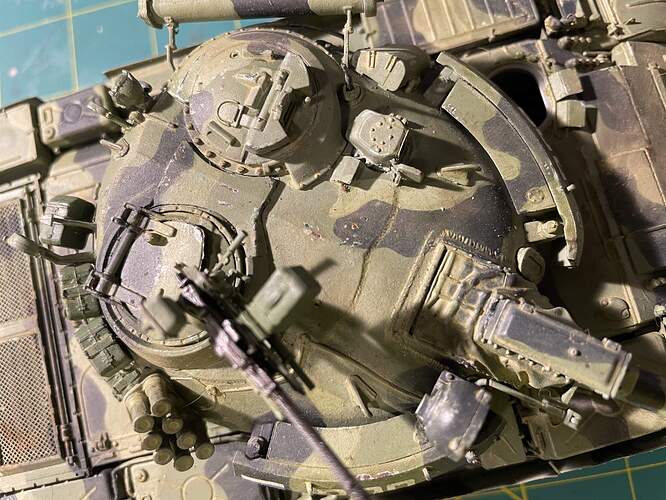 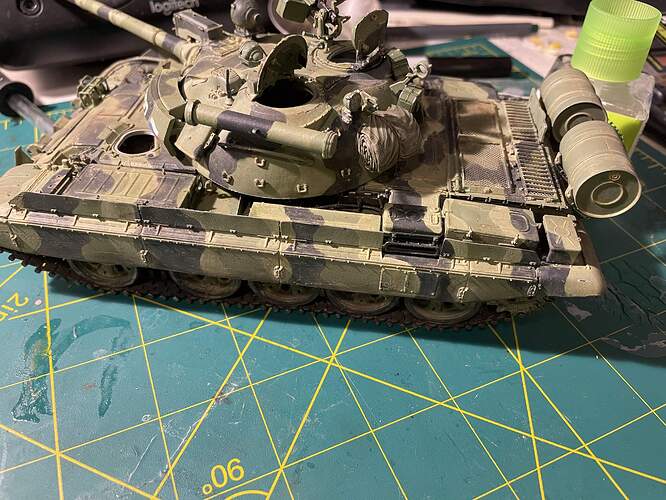 Let me know what you think!?