I’m working on a D model from Dragon. I’ve gone back and forth on riders. Space is the issue. I’m unsure if my Dragon model UH-1D or the riders aren’t really 1/35. I’m starting to think it’s the helicopter. I went with riders disembarking and they are really nice figures. I really wanted riders with feet dangling just as you said. I tried these same truck figures but space is still an issue. They’re designed to be spaced out in the truck when they’d be very close together on the helo.

I had to remove the benches in the Dragon model because they were definitely not to scale. Too high, legs too thick. Looked good until you tried figures and they don’t fit anything.

I’m still painting the figures. They’re only primed at the moment.

I’m debating using the “get to the chopper” SOF guys in the diorama. The helo would be in the process of landing. I don’t like changing mid build. I really just wanted the same thing you did.

I really liked the Dragon model. It came together really well. I’m unsure of the scale challenges. I went with the resin pilots and gunners instead of what came with the kit and I had to modify the cockpit a great deal. I should have gone back to the kit figures but I’d fully committed to those guys.

I’ll let know you how it comes along. Maybe that’ll help inform your decision.

Here’re a few pics of the figures and helicopter. 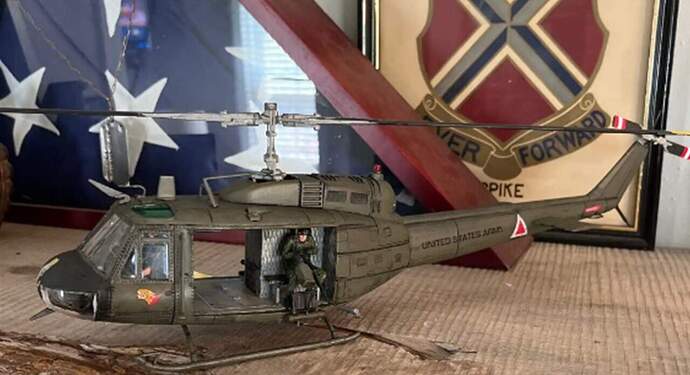 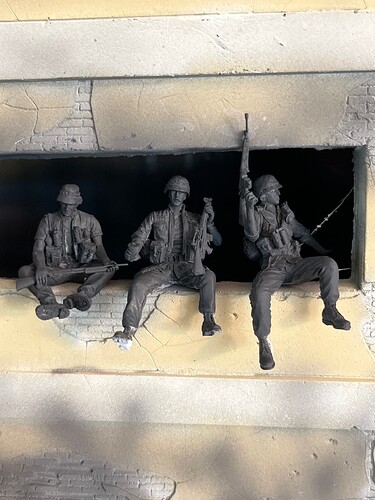 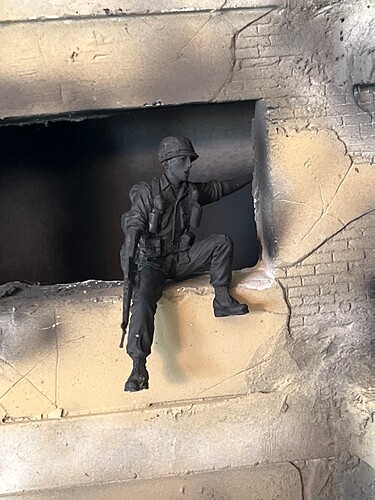 The GIBs and Huey look really good. I especially like the door gunner. One issue though. Your Huey has a few post-Vietnam features. The wire cutters above the canopy and under the bubble, and the VHF whip antenna on the cabin roof were not fitted until the '70s, after Vietnam. Remove the circled items and you will be good. 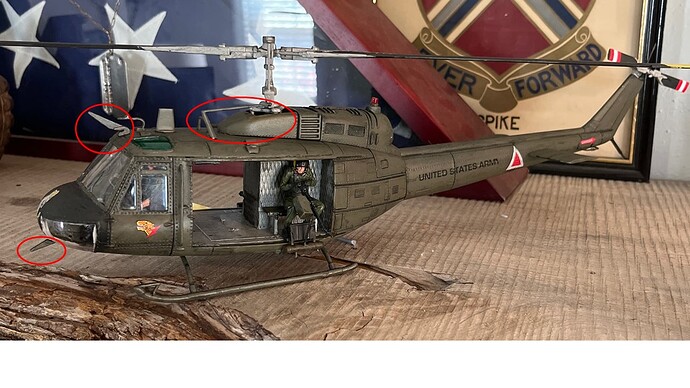 Thank you!
When I built it, I was on a roll that day and kept going. I kept noticing in pictures that I didn’t see either of the three things you pointed out. I’m definitely removing them now.

The panel on the other side is present. I’ll need to use putty to fill that in.

The kit came with gunners but the kit only comes with one door mount. I ordered another door mount that arrived this weekend. I’m waiting on the epoxy to dry on it before I pick it up again. I’ll post a picture of the starboard side tomorrow.

The challenge I have with the current door gunner on the port side is the angle he’s designed to fire. It’s down at a 45 degree angle so while in flight.

I’m still debating what to do with the figures for riders. I’m only happy with the one sitting flat. Though the Soldier is configured with a flak jacket while the rest are not. I’m still on the hunt for riders.

Maybe I’ll purchase more D models and use those on that one!

I appreciate everyone’s positive feedback! I’m getting back into the hobby after many years. My skill level is slowly increasing. If you see somewhere I can improve and think you can offer a technique to improve, please let me know.

I removed what you suggested. Thank you! 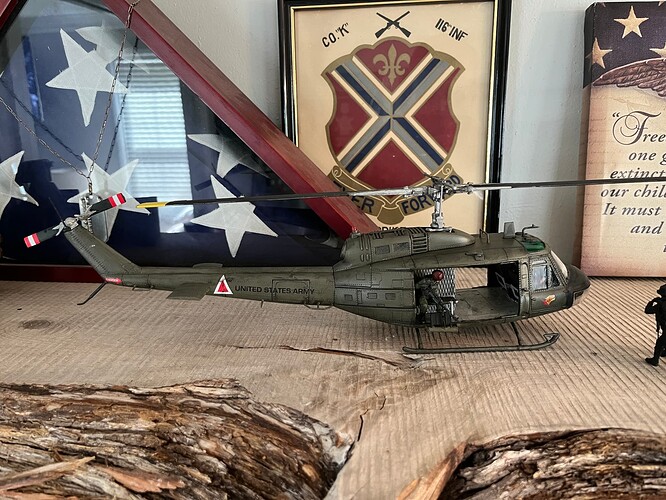 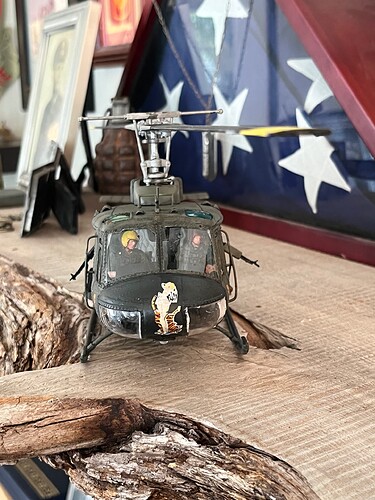 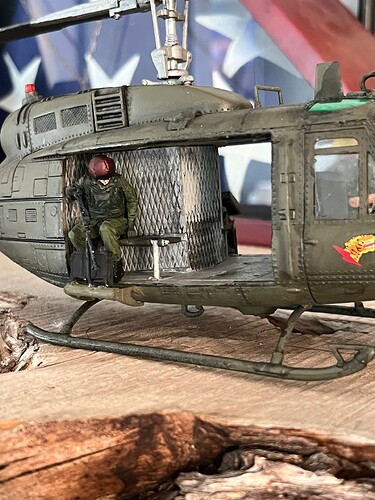 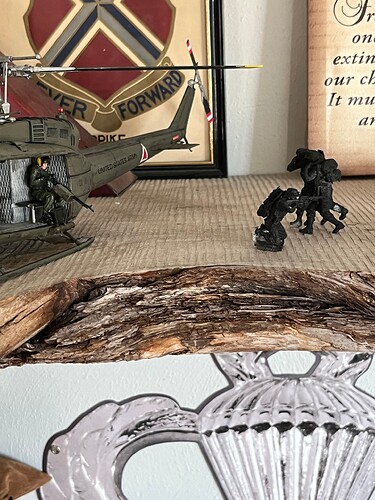 Looks much better. The door gunners look good. I also separated this out into its own topic for you. I think it deserves to be featured on its own as oppose to buried in the other topic.

Another thing I missed in the earlier pics are the antennas on either side of the forward fuselage and the one on the forward right tailboom (circled below). These too are post-Vietnam features and should be removed. 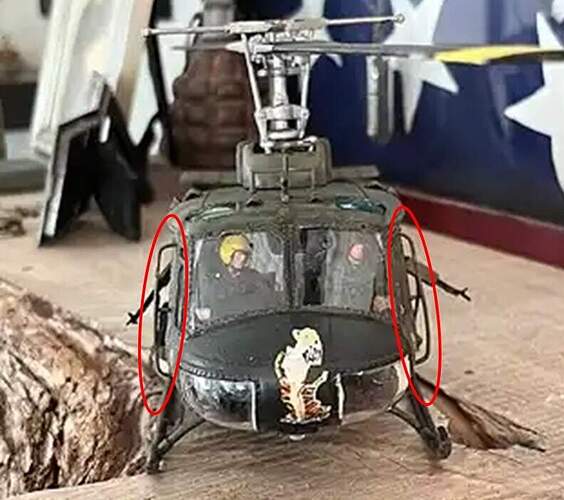 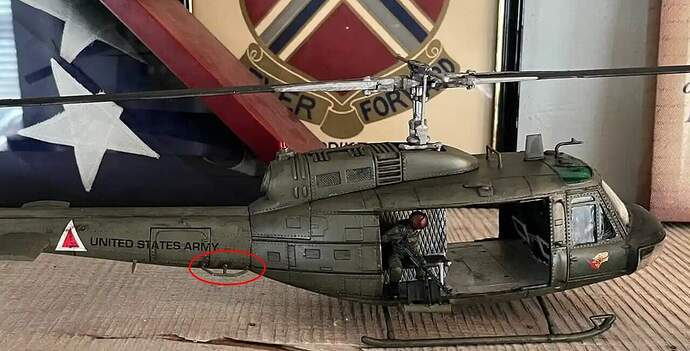 Also, you are actually building a UH-1H, which was a later (after about '67) upgrade to the Huey. The earlier D parts are in the Dragon kit as well. It has parts to build pretty much any version from a D to a more modern (post-Vietnam) H. Unfortunately, the directions don’t tell you what to add for each version.

The D model had a pitot tube on the nose and HF antennas coming off the nose. 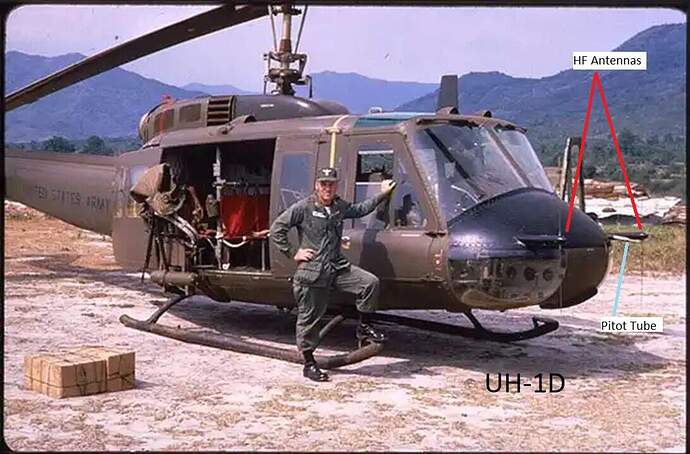 The UH-1H moved the pitot to the roof and the two HF antennas to a towel bar on the roof as well. The rest of the upgrades were internal to the engine and transmission, among a few other pieces. 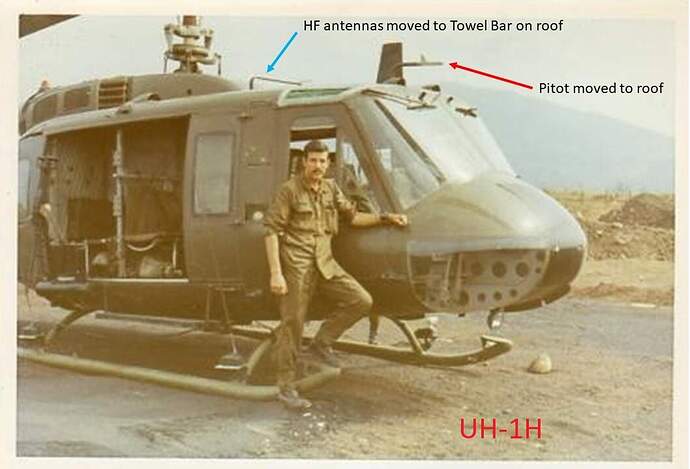 So the antenna wire zig-zagging along the tail boom, is that model specific (B,C,D,H,L,M) or period specific (pre 1975)?

I think the long-line antenna zig-zagging down the tailboom was more a function of what the helo was used for and the type radio fitted. I believe it was a longer range antenna used on command birds or ones that were going further out and needed a long range radio to reach back with.

IIRC, this antenna was used with the AN/ARC-102 airborne radio. 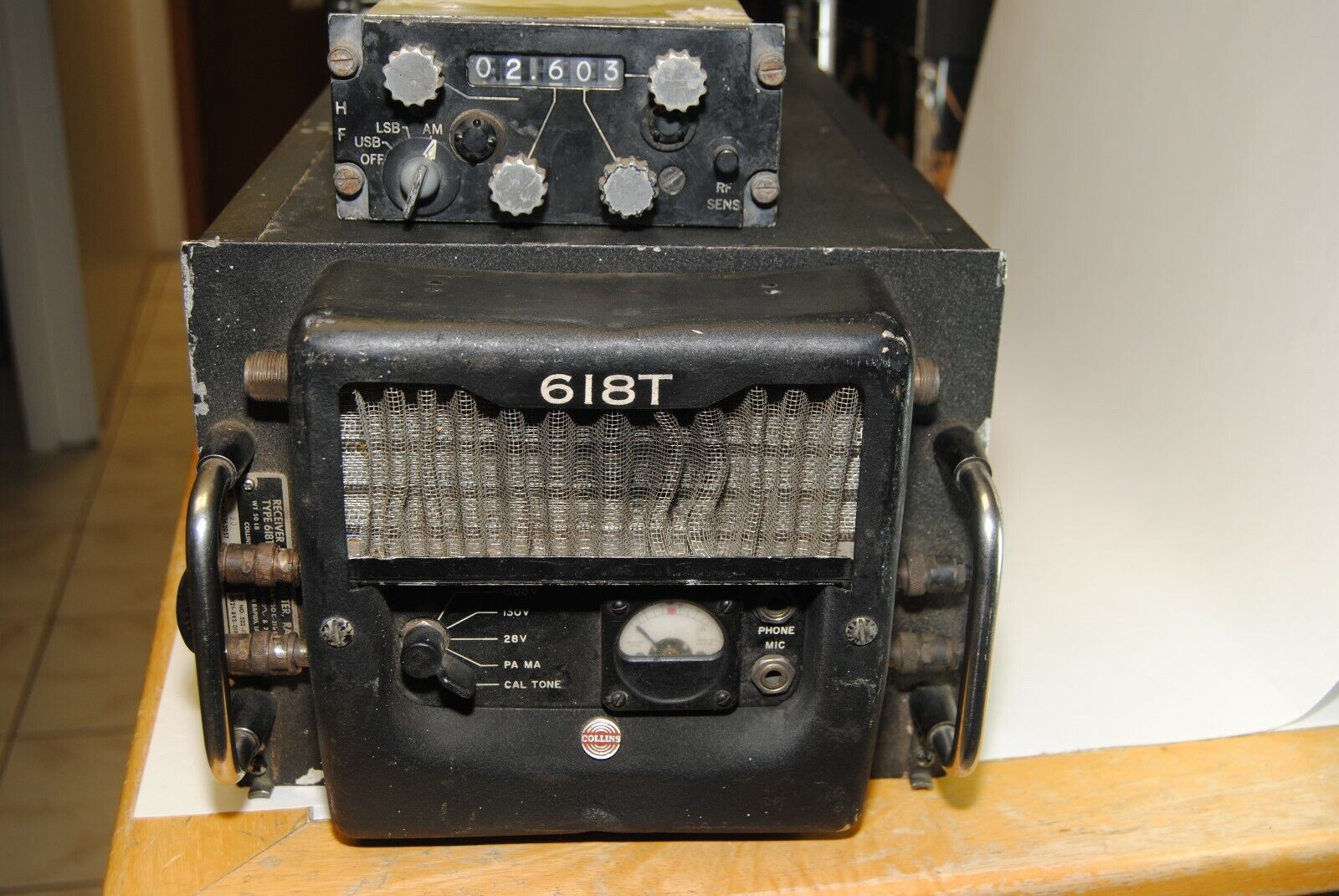 Yup, Frenchy found the answer, as usual. The AN/ARC-102 was a long-range radio set.

“…the ARC-102 HF Side band radio. It could receive and transmit on AM, USB, LSB and CW on 28,000 channels. You could talk back to the states on this radio. Radio Frequency (RF) power was up to 400 watts. The antenna ran in a zig-zag pattern down the tail boom of a Huey with a caution signs to stay away from the antenna.” 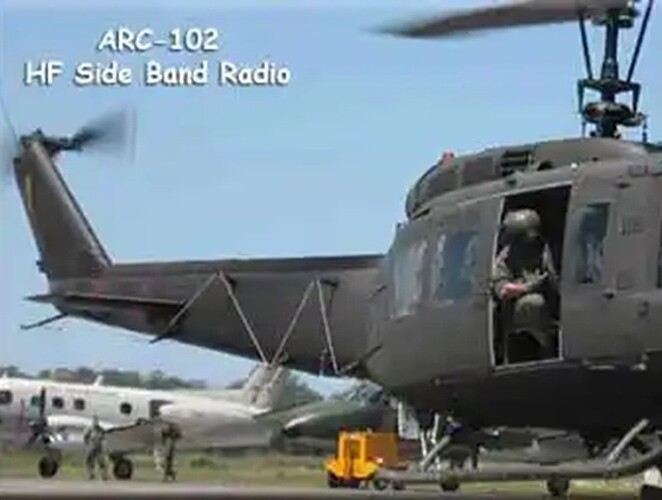 If you’ve ever taken. a ride thru the Smokey Mountain NP, then you know exactly what the western end of I-Corp looked like. Even the trees and brush are similar. An infantry or Arty battery located deep in the valleys or even on hill tops couldn’t make good contact. There was the EC130 that orbited the western end of the place, but he also was often out of your range. Infantry and Arty units did a commo check every hour or so, and you’re often going thru a relay system (even though you never know it). There were many radio relay stations on the ground, but still left a few dead spots. That’s where the slick with the fancy radio could get the job done. Range was almost never the issue as it was a dead spot in a valley maybe two and a half miles out.
gary