1/48 C-47 Dakota with paratrooper on a static line

It’s something I would’ve done as a young man but getting the course in Canada is difficult to get unless your with a airborne tasked unit. And for straight leg infantry regiments it’s pretty much impossible. I did have a Warrant Officer threaten to send me on the jump course in order to give me an attitude adjustment and get me into better shape. I asked when and was ready to pack no problem, that seemed to take the fun out of it for him. I twisted my knee on my section commanders course so they changed my medical status to unfit for infantry forcing a “voluntary remuster/reclassification into administration “. The remuster and effect it had on my promotional opportunities ended up in driving me into alcohol until I finally got ahead of it prior to a medical discharge and the start of 18 years of policing in mostly remote areas in northern Quebec and a time looking after university students in Ontario. 7 in the north and 11 in Ontario before a injury in my early days policing caught up with me.

I’ve decided to cut thin ever green plastic to width to make the static lines for the jumper and to indicate a few before him also. Once I get it done I will post the results.

Thanks for the help.

I have been looking closer at the pictures you guys have been so kind to send along. They’ve been quite helpful in convincing me to go to the evergreen to make the static lines.

The next question I have before my shaky hands start on that how would any of you suggest creating the D bags that are left trailing along side the aircraft and with the static lines being.025 inches, what width and length of the bag should I be aiming for in order to make it appear correctly when looking at it.

I appreciate all the help!

The Dbag would be roughly slightly smaller than the base dimensions of the parapack itself. It’s all designed to be tight when packed so nothing moves around.

There is no D-Bag on those ‘chutes. The design pre dates that feature. There is only the back cover flap of the pack tray, so it’s a slightly smaller rectangle. 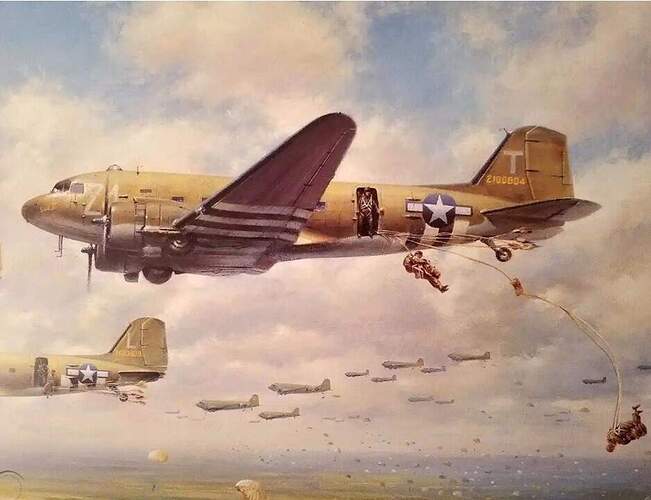 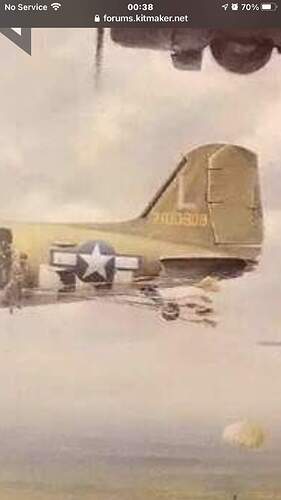 I zoomed in on the tail of the aircraft and noticed what appears to be some sort of bog or something on the end of the static line. That’s why I termed it a D bag. So if it’s not a D Bag what would it be. I have to dig out some of the unpainted packs to get a better image of what monogram included in the kit, at least to me it seems different from the ones in the picture from @HeavyArty

I appreciate any insight into what I am seeing in the pictures.

Ok, let’s go with some actual WWII photos as opposed to a painting.

The rear flap cover of the T-5 parachute broke away from the pack tray and harness upon the deployment of the chute via the static line. Here is a view of a paratrooper exiting during Operation Dragoon. It is the center rectangular portion. 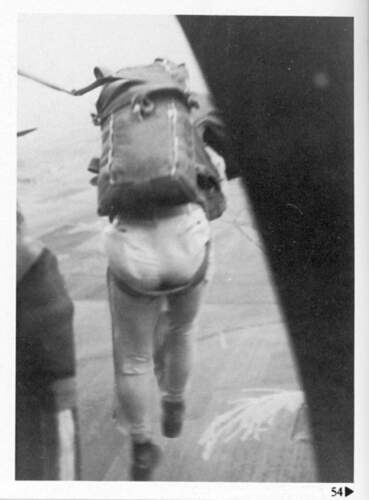 The rear flap cover ( my term, I don’t know the actual nomenclature of the item) would then remain with the static line attached to the aircraft anchor cable, whipping about in the slip stream. Just as today’s deployment bag does. You can see them in this photo here, as well as the one for the belly carried supply containers below the aircraft. 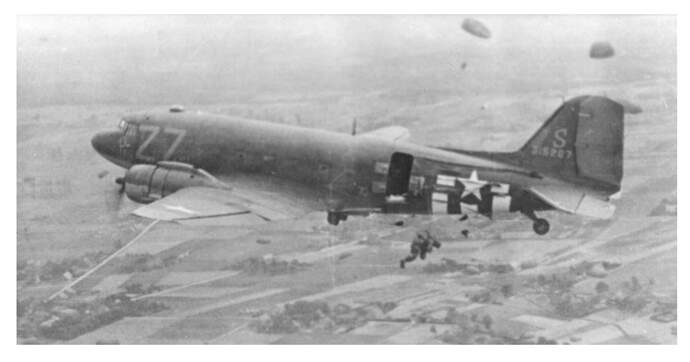 Whoever painted this picture has confused later T10 parachutes with the wartime T5, the deployment bag and the rigging lines out before the canopy is the T10 sequence of operation. The T10 was introduced in the 50’s if that helps.

Okay here’s pictures of the things supplied in the kit. The Dakota I have is marked for the 1950’s not WW2. I’m doing them as Canadian troops during a winter drop. 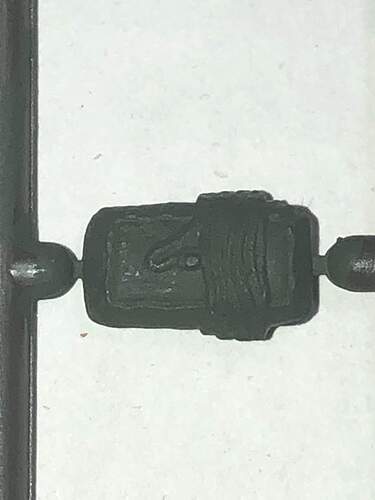 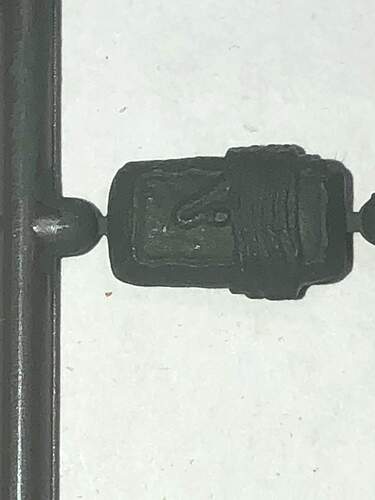 Okay looking at the photos 2 questions

1 does the chute in the picture presumably a T5 resemble what they included in the kit or is it closer to the T 10 ?

2 in the drop picture there still appears to be something remaining on the end of the static line after the chutes been deployed.

I don’t have any book references for these operations unpacked since my space is limited in the house we moved into after returning north.

That indeed looks like a T-5. You can see how the top, bottom, and side panels all come up and form a rectangle around that pad that Stik aluded to. I never really looked into how they operate as I never jumped one. I assumed from the painting that those were D bags as on the T-10, which I do own. (in case you need reference photos) The painting is interesting for a different reason: That first trooper has had one hell of a poor exit. This is generally how you get shroud lines wrapped around parts of your body that they shouldn’t be wrapped around.
Correction on information above. MOST T-5’s had OD static lines. By Normandy a small number were still white but not many. In Stik’s photo above it is clearly OD. Given that they do not have an indefinite life span, if the Kanuks were still jumping them in the 50’s I’d make the static line OD.

The Dakota I have is marked for the 1950’s not WW2. I’m doing them as Canadian troops during a winter drop.

Which changes things up a bit, depending upon the accuracy level you’re shooting for:
#1, did the Canadian army use US chutes? I know in WWII that they were using the British X Type parachute.
#2, by the early ‘50s, the US had moved to the T-7 type parachute. If the Canadian army had switched to US made parachutes, this type is a possibility.

I have found our airborne museum to start looking into what exactly they were using in the fifties. They had activated the mobile strike force at that time and probably mid fifties had gone to the boxcar for a drop aircraft but early on were still using the Dakota in large numbers.

With my internet it’ll take a bit before I figure out the answer. But with the speed our government has always moved in the early fifties they probably still had WW2 chutes.

Upon exiting the aircraft do they go out bent over or more straight since that’s going to make a difference with the figure as to wether I have to modify him beyond squeezing the feet together. Since it’s going to hang from the ceiling it doesn’t have to be 100% but I do want to have this fella not the first out the door so I guess I’ll have to create something for the end of the static lines of previous jumpers.

Still a lot of considering to do before I go on further. The aircraft has a few things to add but mainly it’s representing a drop from it. For my sons room. It’s going to be in good company with the armed twin otter I did for him on floats. He gave me a challenge to see if I could arm one although it would never get off the water

. I told him it could be a swotter 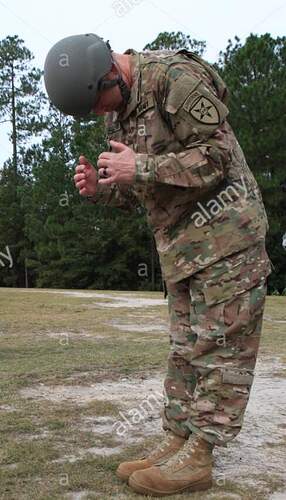 Just don’t be these guys:

Jumpers Execute Dangerous Exits, Ramp Strikes and Falls in One Jump Exercise. Military static line parachuting is safe when practiced correctly, but minor mistakes can quickly turn a jump into a disaster. Take a look [...]

I remember seeing that video and laughing my ass off. But yes a fine example of how NOT to exit an aircraft.
I recall one guy in my stick in jump school who attempted to sit down at the door of a C-130 and was promptly thrown out before he could get hit bottom down. Don’t recall seeing him after that…

Gotta laugh, as I experienced something similar in Tunisia in the late 70’s with 5th SG Group.

We were conducting a jumpmaster course in Tunisia and flew in an MC-130 for the jumpmasters’ “graduation / graded jump”. Issue: the jumpmaster “trainees” needed jumpers. So, the Tunisians literally “grabbed” one of their airborne companies who were on their way to the field for several days of training. The Tunisians did not have “high-powered” AC at that time so, they “borrowed” Morocco’s C-130 occasionally; otherwise, they used their own helos for airborne ops. And, as most jumpers know, their is a BIG difference in jumping from a helo vs from a high-powered prop or jet AC.

Anyway, the Tunisian jumpers included the company baker (with big loaves of French bread strapped to his gear); the cook (with pots and pans dangling from his gear) and so on. Needless to say, they were neither prepared, nor anxious to make the jump from the MC-130.

I was one of the 2 “safeties” for this jump and got to see all of the action in the air. This was a “ramp jump” (similar to the one shown in the video) and I must admit it is rather “awe-inspiring” when that ramp goes down in flight. The Tunisian jumpmasters were doing their thing as the first stick and pass got ready to go.

The first few jumpers were a bit “hesitant” going off the ramp but, “style points” not withstanding … they went. When the 4th or 5th jumper’s turn came I could see the absolute terror in his eyes and thought “this is not going to go well”. And, it did not. As the jumper reached the top of the ramp he began leaning backwards as he walked and, eventually, leaned back so far that he was sitting down halfway down the ramp. Our Group CSM (the other safety) and I watched to see what the Tunisian jumpmaster would do. The JM yelled, kicked, and otherwise had no luck moving the jumper until we finally waived him off and went over and stood the jumper up, unhooked him, and then walked him back to a seat and strapped him in. The rest of the jumps went pretty much without incident.

When we landed the Tunisians had several senior NCO’s waiting for us, and their “jump refusal”. He was, unceremoniously, drug to a waiting (covered) truck and put in the back. As the truck drove away we could hear lots of yelling and “thumps”!

Sorry, that was with 5th SF Group!

Here is a link on a blog page with a great history of Canadian Airborne.

It looks like immediate post WWII that they used a combination of US and British gear- uniforms & helmets were British/Canadian, while parachutes and boots look to have switched to US types. The British parachutes had no reserve ‘chute.

That’s hysterical Steve ! That video always gets me lol

Cool pictures there Carlos.
I have an Osprey book about the Canadian Airborne and it mentions the mix of gear among other shortages/ hardships .
they had in getting gear and equipment. Great book.