Limited run resin kit with 1/72 Sword Beechcraft added. OOB with many modifications:
Yagi antenna, corrected wheel hubs, recut- reprofiled wheel rims, custom strip decals, (courtesy Niels Emholt Christiansen) headlight buckets, added panel lines, white metal air horns, hydraulic wheel well fittings and added triple tail lights. I’m happy this kit was produced, but it has the usual short run resin kit challenges. In hindsight, I would probably have benefited by using the body parts as templates to cut from the right thickness styrene sheet stock. This would have allowed a crisper and more surface and symmetrically correct shape. The last time I will probably use decanted paint. For me, it seems to fragile to handling and very difficult to panel line match due to opacity variances with different coats. The Sword Beechcraft kit was imho the worst 1/72 plane kit I’ve ever built…I’m sure others could make less of a sow’s ear of it?

How excited I am that someone finally made a model of the Snow Cruiser. For me, this was a very connected, inspired and personal build.

Locating the actual Snow Cruiser has been the very long term goal of our small global team, SCRG. All such long shot endeavors are fraught with challenges and changes of fortune. Yet without such dreams, the museums of the world would be far less populated with artifacts of history. Our research paper on this subject is published in Polar Geography. The Beechcraft Staggerwing’s burned frame was recently found in the ‘Aussie Bush’ where it crashed and burned years after it’s Antarctic service. This famous aircraft has now been recently restored to flying status by our associates down under. Despite the considerable dual sow’s ears modeling challenges of a very limited run ‘garage kit and a Sword 1/72 aircraft, I’m happy to share this build at last. Thanks to Niels Elmholt Christiansen for the custom stripe decals. FYI the Beechcraft Model 17 Staggerwing was never fitted to the back of the Snow Cruiser despite the promotions, drawings and demonstration models in period. After much work, I did find great fortune locating it’s Antarctic ‘Flying Marine’ Pilot, Colonel Ted Petras, the ‘last resident’ of the Snow Cruiser. Before he passed, this famous pilot provided details that were critical to our published paper and continuing search.

The Antarctic Snow Cruiser was a vehicle designed from 1937 to 1939 under the direction of Thomas Poulter, intended to facilitate transport in Antarctica during the United States Antarctic Service Expedition (1939–41).[1] The Snow Cruiser was also known as “The Penguin,” “Penguin 1” or “Turtle”[2] in some published material.

Poulter had been second in command of Byrd’s Second Antarctic Expedition, launched in 1934. From his time in the Antarctic, Poulter had devised several innovative features. The massive Snow Cruiser generally failed to operate as hoped under the difficult conditions (the tires, notably smooth to avoid becoming snow encrusted, did not grip the ice) and was eventually abandoned in Antarctica. Rediscovered under a deep layer of snow in 1958, it later disappeared again due to shifting ice conditions. 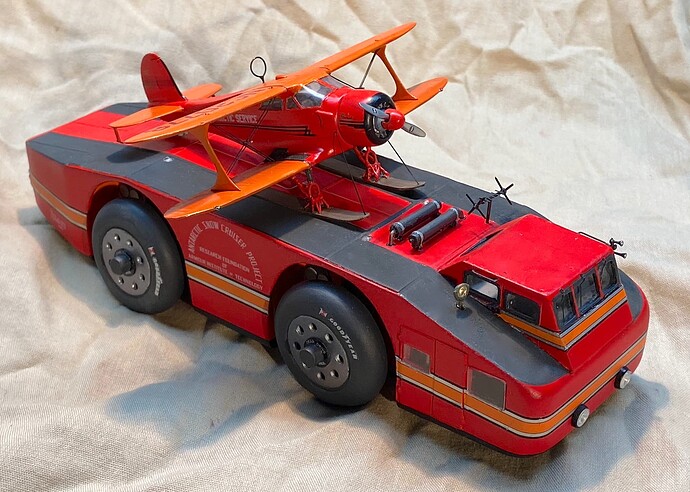 Your personal connection with the vehicle is amazing, I wish your team all the luck in the world in your endeavours, and the Aussie connection hits home for me as well!

As usual, I had to go Googling to further check out it’s history. It has a real “Thunderbirds” look about it.

Thanks so much for sharing your build here, please keep us updated on the search.