Thought I’d share a large (8’x12’ ~ 2.75mx4m) 1/72 scale diorama of Vietnam Fire Support Base RIPCORD that our local AMPS chapter members completed about six months ago. The diorama was commissioned by an co-tenant state military museum and is now on public display in the atrium of the SC State Museum located in Columbia, SC. 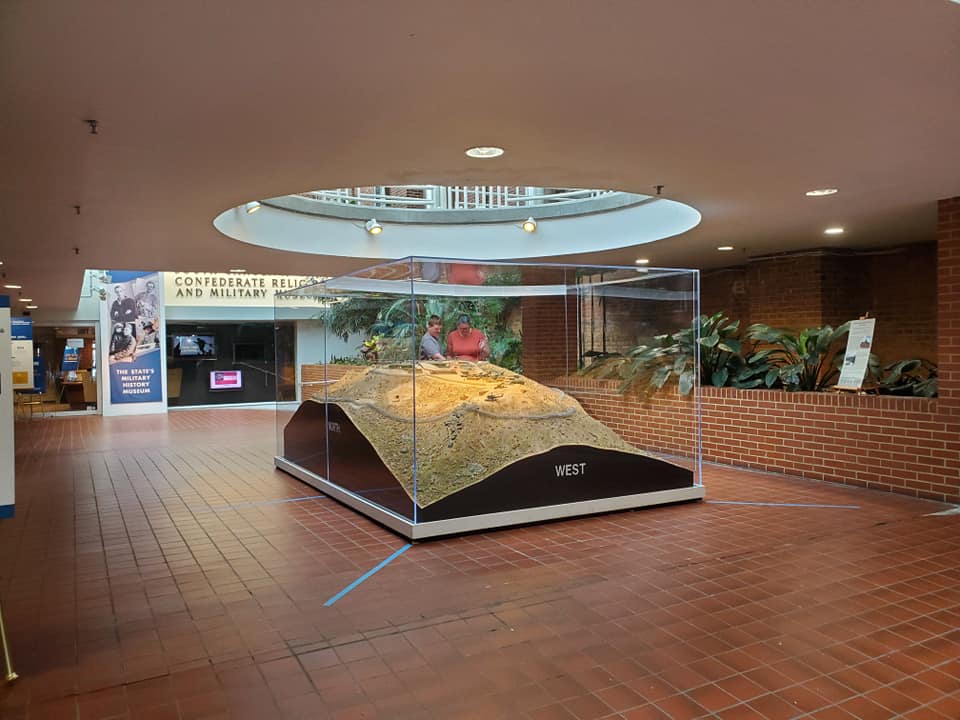 The article is a reprint of the three-part, serialized article about the project that appeared in the AMPS Boresight.

That’s darn right pretty cool to have a club build like that. Congratulations.

It was a real labor of love, so to speak, and the only modeling project many of us worked on for well over two years… Just about every Saturday for all that time the gang met together to work on the dio. Then during the week, they were at home working on individual pieces and parts to go on it.

A lot of credit goes to those club members who stuck with it all the way through to the end. 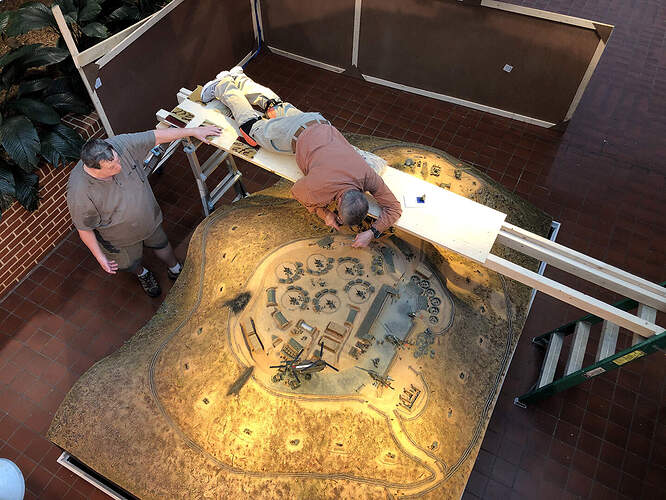 Here’s another view of the final model being added.

It was a real labor of love

I can imagine. Our IPMS club has done veteran builds that last only a few months and a 100 years flight display but nothing that involved. Our AMPS club is too new to try anything yet but shared this project with them.

Can I have one please !!! Now that’s what you call a diorama. Fantastic

I love knowing I helped (you) in the background, with pics of the Generators (considering I own one of the MEP-016A’s)

I love knowing I helped (you) in the background, with pics of the Generators (considering I own one of the MEP-016A’s)

And I really appreciated the assist, Matt! Research was an ongoing part of the project that took us down a lot of interesting roads. The generators was certainly one of them!

Top!
You guys and lady’s did a stellar job !!
Interesting site also ,thanks for posting .
Wished there was a AN/MPQ-4 counter battery radar in 1/35 scale

Thanks for the props, Piet!

The Vietnam war is a subject area that is WIDE OPEN for some enterprising model manufacturer to exploit. When we accepted the commission, we really thought that there would be a lot more suitable commercial kits available, but once we got past the major signature items of equipment, there was nothing. We knew that in 1/35 scale the “pickings were slim,” but even in 1/72 scale there’s practically nothing.

For instance, figures… We really expected to find several sets of US Vietnam infantry and artillery crews that would be usable. Nope. There are just a couple of limited “army man” sets, none of which could be used in the setting we intended.

Same with all of the accessories, like MCI’s (aka C-rations), mermites, insulated drink containers, ammo boxes and crates, fire extinguishers, blivets and field refueling equipment, small arms, etc, etc, etc… No one makes the M29 81mm mortar in any scale (except a limited edition and very poor Hobby Fan resin mortar).

The list goes on and on… That’s why the recently announced Gecko LARC-V is such a nice surprise.

Really, some major kit maker should wake up and see the opportunity that presents itself to steal the march on its competitors. It would be very easy to carve out a solid market position on Vietnam and middle-Cold War period subjects.

(BTW, there is a possibility that our friend and club mate, Jeff, who scratch-built the MPQ-4 radar might continue to develop his CAD work to include the rest of the model - i.e. those parts he scratch-built using traditional techniques - to create a full, 3D model and potential kit which could be printed in 1/35 scale.)

Perfection in a perfect setting, I’d like to see it with no other lights apart from the overhead spots

I’m a huge fan of large displays like this one of FSB RIPCORD, you and your group did our Nam vets proud. This is a tremendous effort to memorialize a generation of some of Americas finest and bravest young men and their experience on the other side of the world. Thanks for your contribution to a remarkable work.

SdAufKlam.
I hear you ! Lets hope Gecko models taps in to this .
Here in my part of the world(Netherlands) i cant find any 1/35 dragon M48a3 tank not even secondhand .

who needs another Tiger,Panther or any other German tank …or a T34 for that matter . (sorry PZ fans)
I have build many over the years .

who needs another Tiger,Panther or any other German tank …

You and me are definately on the same frequency. Years ago (1982), I bought a copy of Shelby Stanton’s “Vietnam Order of Battle”, an excellent work, in the photo section are pics of different AFV’s used incountry which inspired the diorama I’m working on now, ten years ago when the industry started raining Nam period kits I couldn’t get them quick enough, a few set me back some major bucks and some I just couldn’t justify for what I was getting, HF’s M501 tractor is one little darling I’d love to have, Dragon’s M109E Maitenance truck would be cool, any of Masrepeice models brown water selections, $$$, I love 'em all but I’m running out of real estate on an already too large dio base and the only Tiger you might see here is yellow with black stripes and big teeth. ( somebody’s gonna point out that some pzkw VI’s were desert yellow with black stripes and big teeth ( 8.8 kw36 gun))

This is a tremendous effort to memorialize a generation of some of Americas finest and bravest young men and their experience on the other side of the world.

Thanks, Terry! The history and story of Operation TEXAS STAR, of which the battles for FSB RIPCORD were some of the central events, is probably the untold story of the war. At the time, spring-summer 1970, US domestic and international politics combined to deflect attention away from the actual war (not to mention a US Army near blackout on reporting of the operation conducted for various reasons). Operation TEXAS STAR and the battles for FSB RIPCORD received almost no reporting in by the US press and have been largely ignored by historians.

The campaign involved two, corps level conventional forces of regular allied and NVA infantry (one US, one ARVN, and two+ PAVN divisions) fighting it out in a campaign that rivaled or surpassed the size of many of the conventional infantry battles of WWII fought in the jungles of the Pacific or Asia. The evacuation of FSB RIPCORD, in just six hours on the morning of 23 July, 1970, remains the largest single airmobile operation ever conducted in combat (over 1000 rotary wing sorties along with uncounted fixed and rotary wing air to ground combat missions around the fire base involving aircraft of all four US services). There were no roads into or out of the area. The only way in or out was either by helicopter or foot. It was a truly massive battle fought between conventional forces largely hidden away from the world and history by the mountains and jungles of the Vietnamese central highlands.

For anyone looking for some of the details, you might find this research monograph drafted up to support the project interesting:

Although closed to new group members, our project management FaceBook page has been opened to the public (now that the project has been completed). For anyone who might want to drill down into the details of the project, you’re welcome to read down through all the posts (which include a lot of in progress photos taken and posted by club members) along with many of the research photo albums on various subjects related to the project:

This was a project that was worthy of the effort and time, and we’re happy to have played a small part in bringing the story into the light.

I’m gonna have to get down there some day and check this out, is it a permanent display or period/limited time only?

We’ve been told by the museum that the diorama will be on display for at least two years. It was originally intended to be part of a new Vietnam War exhibit that was to be opened almost two years ago. However, events and funding issues kept pushing the opening into the future. (We started research and planning almost four years ago. The project was then put on hold for over a year because funds had to be diverted for work on the museum before we started the actual work over two and half years ago.)

The last I heard (a couple of months ago), the Vietnam War exhibit is re-scheduled to open next March (2021). (The whole COVID thing threw yet another monkey wrench into the works.) I assume the museum’s intentions to keep the exhibit for at least two years from its opening still stand. However, who really knows?

Right now the diorama is located in the arcade leading from the museum complex front doors to the interior museum entrances (both the state museum and military museum), so its actually located in an area open to the public without any entry fees. (The museum complex shares some building space with another SC state agency, so the atrium / lobby area is wide open to the public.)

Interestingly enough, when we did the initial planning of the diorama, it was discovered that it could not fit into any of the interior spaces of the CRR which has been built in a remodeled 19th century textile mill. The museum specified the subject and scale when they commissioned the work, but the intern doing the exhibit design never actually looked at any maps or did any math to calculate the physical dimensions of a 1/72 scale model of an isolated, jungle mountain top.

Once we crunched the numbers and calculated the scale dimensions of the diorama, we made a scaled model of the model to discuss the details of the project with the museum director and staff. 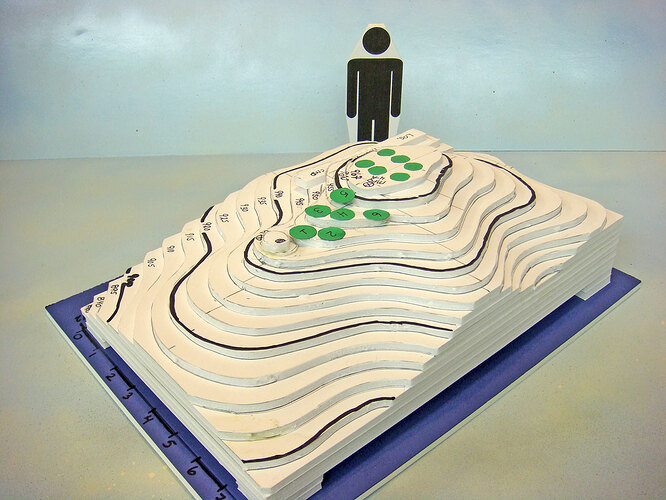 Once they got a look at what they had actually specified, they were hooked on figuring out some way to put the massive dio into their museum. In the end, the CRR had to jump through hoops to get administrative control of a part of the complex’s atrium so that the diorama could be installed there instead of actually inside their museum.

The entire project was, well, like the proverbial Chinese curse, “living in an interesting time”!