Hey all, its been a while since I posted anything here on the salty side eh?

Well today I have my build of the Takom Bismarck Bruno turret in massive 1/72 scale! And I mean this is huge! 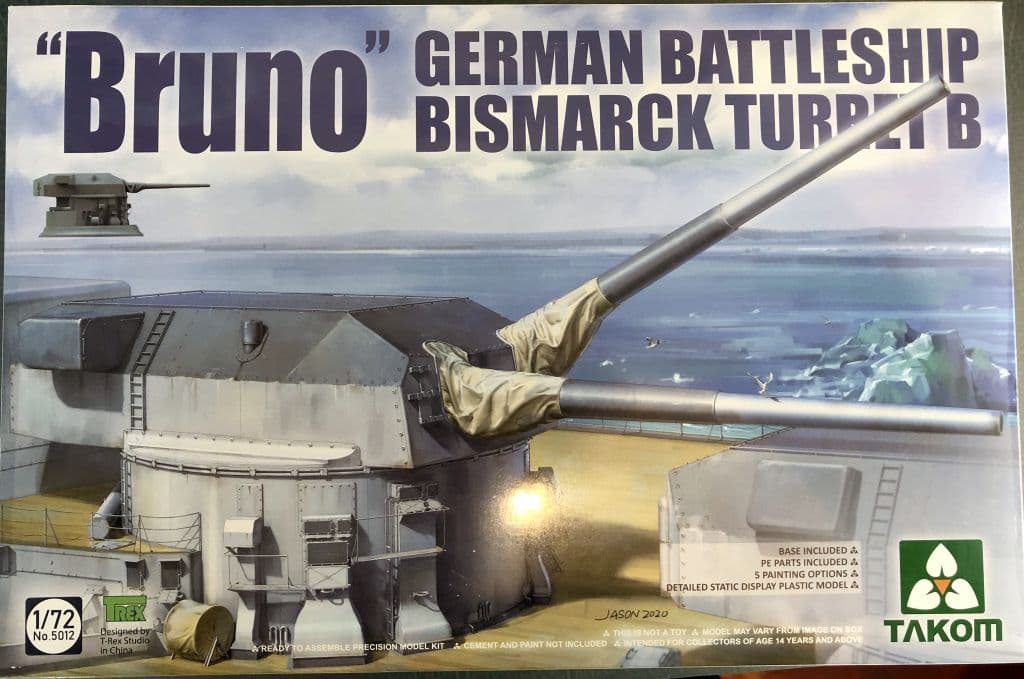 I also bought metal barrels and a wooden deck for it from a Chinese company. I should have them in a few days. 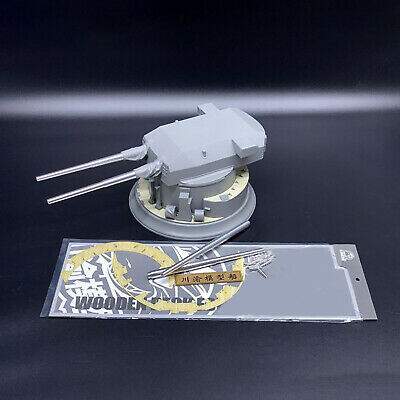 It was a simple kit and I had it fully build in 2 evenings, I left everything separate for painting. 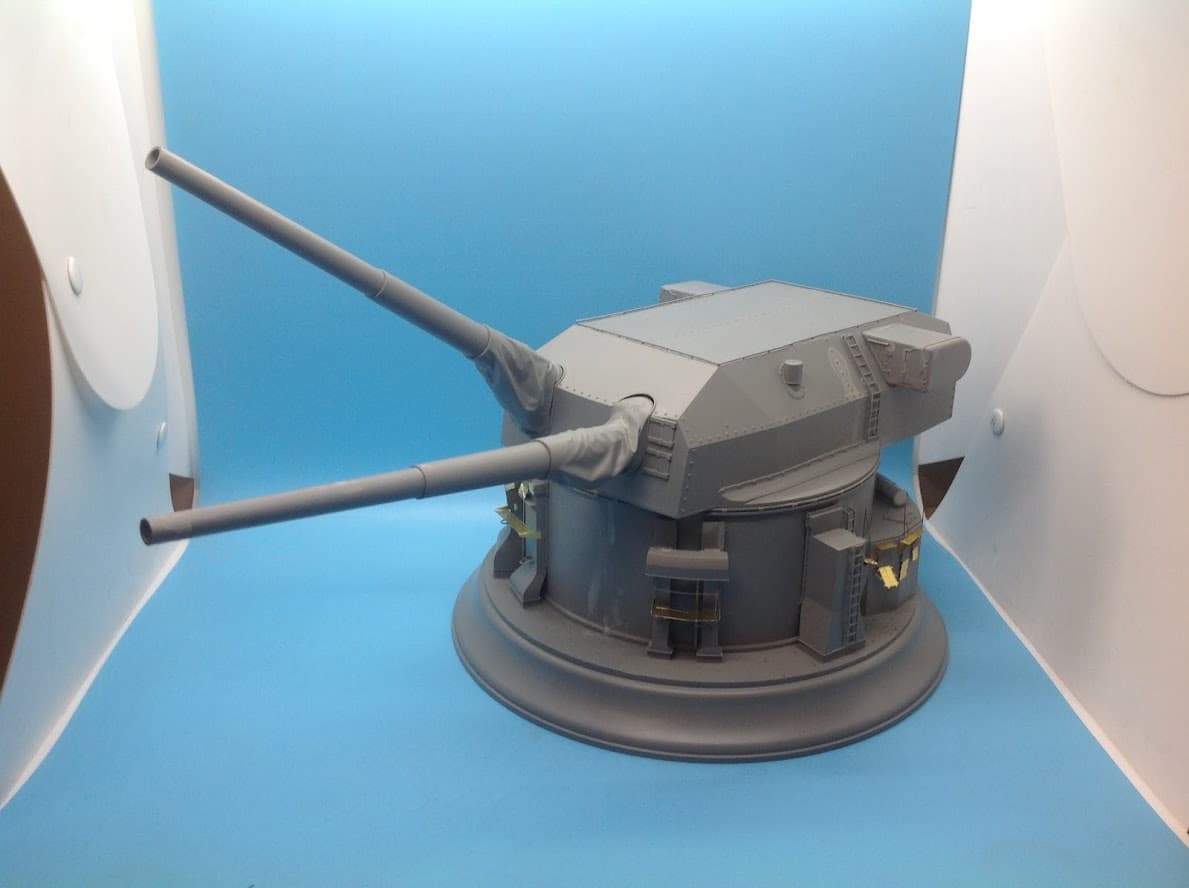 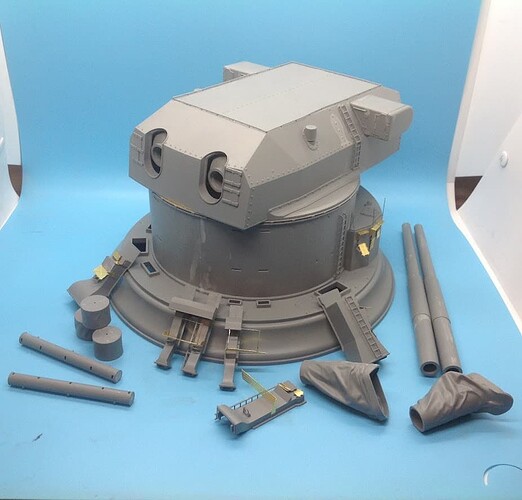 The kit is really nice but Im adding a few details, one being replacing all the PE guard rails and railings with guitar wire. 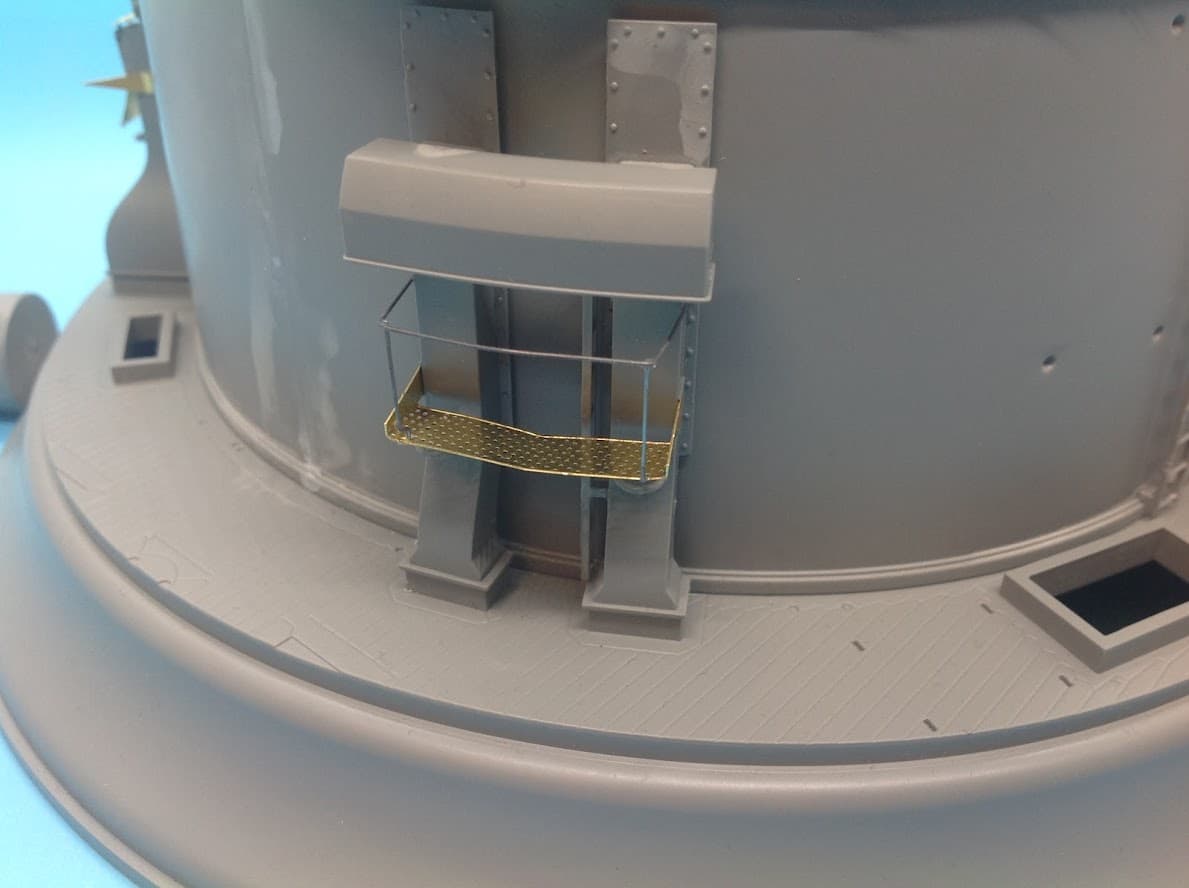 And replacing the railings entirely as the kit ones were inaccurate and to flat.

EDIT: Yep I know that stand in a little bent, I will take care of that. 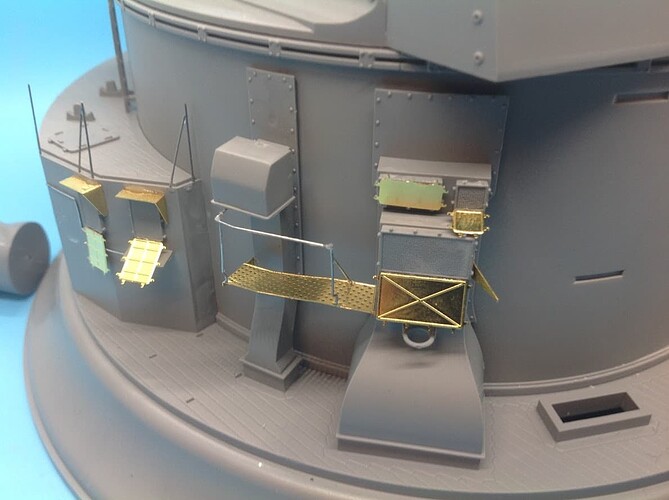 Now I have a question for anyone who reads this, what do you think happened to the top of the turret in this photo? Is the paint wearing off? 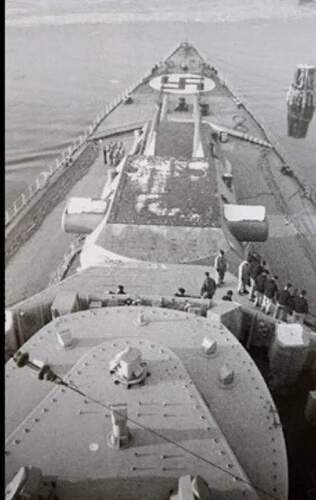 Snow accumulation. You can see it on some of the other horizontal surfaces as well.

Ahhhh that’s so obvious! Thanks dude! And welcome to KM.

Nice build Ezra. Can do do size comparison with something when you get the chance ?

Ooooh…lovely stuff. This is next in my build queue! Finished the Yamato turret earlier this year and loved it apart from the railings and some of the PE bits.

Can I ask where you got the metal barrels and also what marking scheme are you going for?

Here it is next to my (still unfinished

(Sorrey its a bit grainy, the light where I took it was pretty bad.)

@Karl187 Thats really cool! Have you posted pics of it anywhere? I would love to see it.

I got the barrels off eBay. Heres the link. (There are also some for the Yamato) 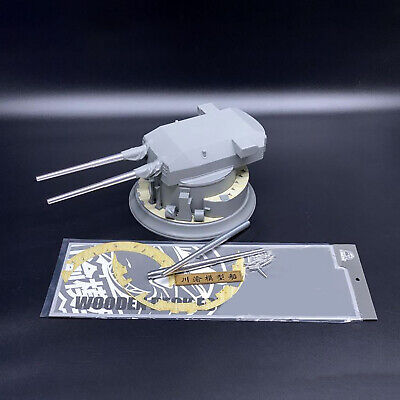 And for the markings Im planning on the yellow top for the turret as it was (I believe) before it sank. 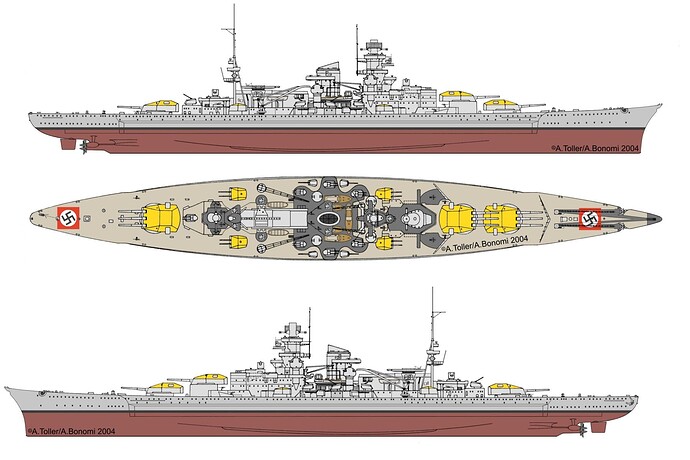 This particular drawing from what I read is inaccurate as the yellow paint was all washed off the secondary guns before it dried.

Thank you for the link, will come in very handy! Though I have to say that even though the Yamato barrels came in two parts the fit was pretty good and didn’t require much sanding to get rid of the join.

I did snap a pic of it once I’d finished but never posted, until now!

The sheer size makes it difficult to photo, as you will find out with Bruno! Only bit I was unhappy with was the railing wire which wanted to curve as it was threaded in. Probably should have replaced it but I think I was out of the size of wire I would have needed. I also replaced the near useless PE parts with plastic for the low down guard rail- I believe the kit parts were the wrong shape anyhow.

Thanks for the scale shot Ezra. It’s nice to see it against something else. That paint scheme will look very striking… Nice choice

as it was (I believe) before it sank.

Depending on how close you want to get, you’ll need to remember to blow out the back wall of the turret too

The caption (Chinese) for the image reads like this when mangled by Google Translate:
"In the spring of 1940, a photograph of the foredeck taken from the bridge of the USS Bismarck, the bow deck was painted with anti-air identification markings, and a row of naval sailors stood in front of the superstructure. "

That looks really good! The streaking and wood effects especially are really nice.
Im defiantly gonna build the Yamato and Iowa turret in the near future.

These barrels on Bruno were 2 part but I agree the fit was really nice.

Yea those railing wire looks a little funny but it isnt super noticeable!

@Johnnych01 your welcome! I know what you mean about the color scheme.
I actually will be trying something ingenuitive for the yellow, (as it would have been painted quickly and prolly had sea water splashing all over it making it all runny) I will be painting the yellow 100% with oil paint.
I will be doing it like a dot filter, covering it in dots then blending and once thats dry repeat the process till its how I like.

In the spring of 1940, a photograph of the foredeck taken from the bridge of the USS Bismarck, the bow deck was painted with anti-air identification markings,

@Robin_Nilsson do you think this could be the long debated red turret tops from the Baltic sea training?

Spring 1940 is before the commissioning in August so training, testing and evaluation in the Baltic seems reasonable.
Red usually shows up as a very dark colour in B&W photos from that period. 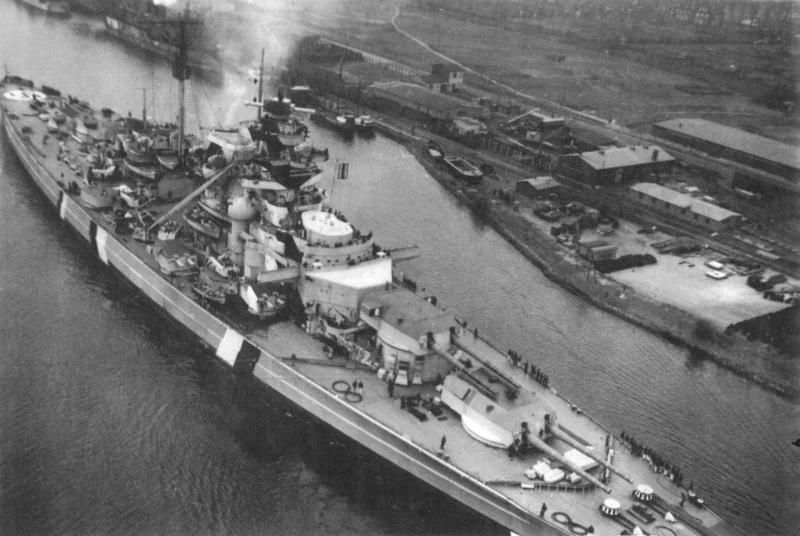 Some information in German here:
https://community.revell.de/viewtopic.php?t=8317

I like the oil paint idea, I think that will work really well on the large surfaces.

This drawing is either Scharnhorst or Gneisenau

Wow guys… its sure been a while eh?

Well, I managed to finish the grey on the turret and mount. I think it looks pretty sweet. Tonight I wanna paint the barrels. I plan on adding the yellow after the weathering was done as It was applied just before she sank. 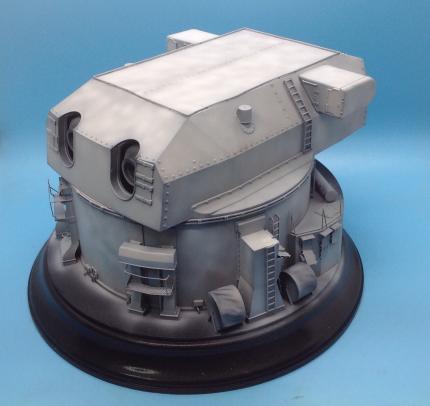 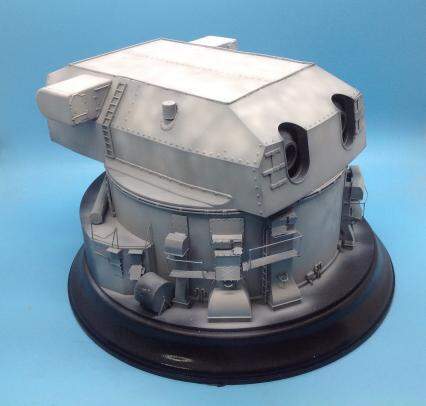 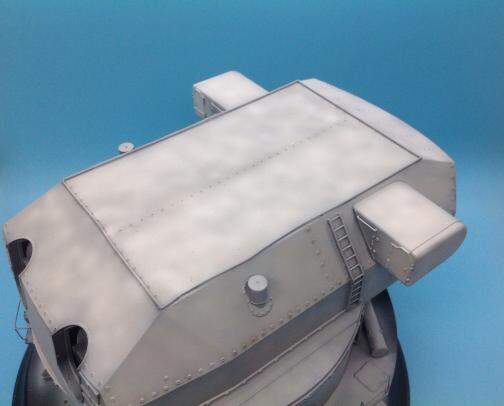 Weathering this beast is gonna be fun!

What do yall think?

Very nice Ezra ! I think you might need a 1/72 Swordfish approaching to keep the crew on their toes ….

A question for you ship gurus like @JJ1973 @Robin_Nilsson @Russelle @d6mst0 @RollTide, when the crew touched up rusted areas of the turret with new paint would they do it by hand or with a spray gun?

Also would the the yellow have been by hand or sprayed?

that was - and still is - done by hand. Even larger parts of the ship are painted by hand, even when in shipyard workers hands.

Beautiful paint job you have there- really helps the details stand out nicely.