I started on this build back in September after moving states. The Austin armored car was initially finished in October as well as the figures. I have just been buying time and trying out new techniques before attempting to do more ground work. Here is my final product though after the past six months.

The diorama base is a 4x6 piece of wood from hobby lobby that i stained varnish and polyurethane yesterday. The ground work is ammo Mig dry mud, ak interactive grass tufts and some model railroad bushes that i plucked to give the ground some variation. I gave it a shot of black primer then went over it with brown soil, earth and dust to give it some varying highlights. The grass is a forest green from Ak interactive and an algae green for some highlights. The grass was further dried and given the yellow fall look by spraying ammo Mig ochre and yellow gold mixed together. After a day of drying i went back and dry brushed the tips with a pale green and yellow as well as a pale green and a zinc yellow chrome from ammo Mig. I did an oil wash of the road with brown oil paint mixed with lighter fluid. I personally enjoy how this turned out.

For the figures i used Andrea miniatures German field grey. Instead of following the step by step I played with the colors a bit and used the lighter grey colors for the figure with the beret and utilized dark grey for the figure in the heavy jacket. The khaki pants were painted with khaki grey for the base and khaki for the highlights.

The Austin armored car is initially painted in a base coat of algae green from ak interactive. I followed this up with a wash of burnt umber and some heavy streaking to show its wear and tear. 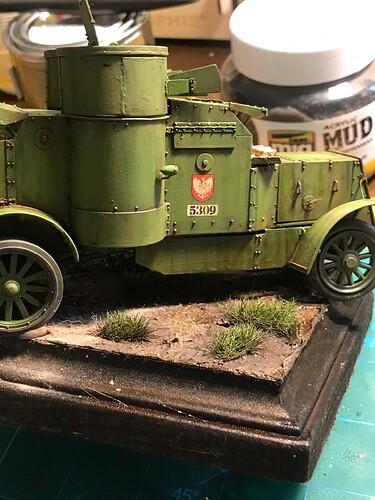 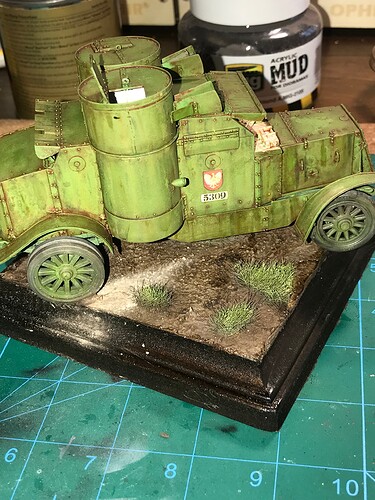 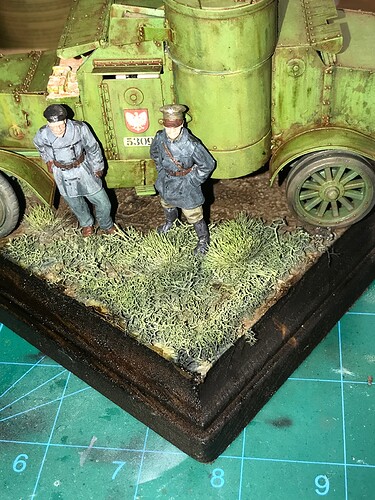 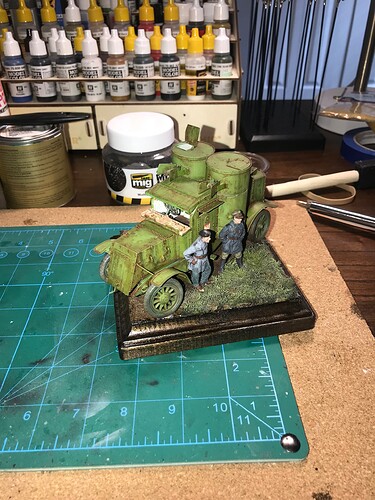 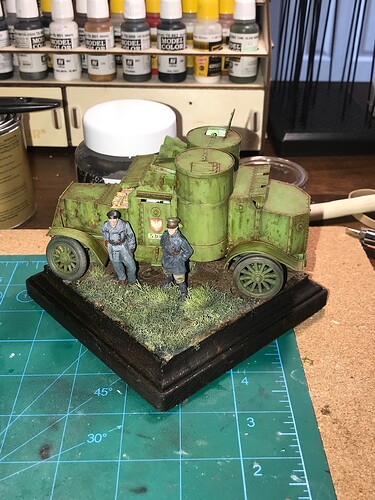 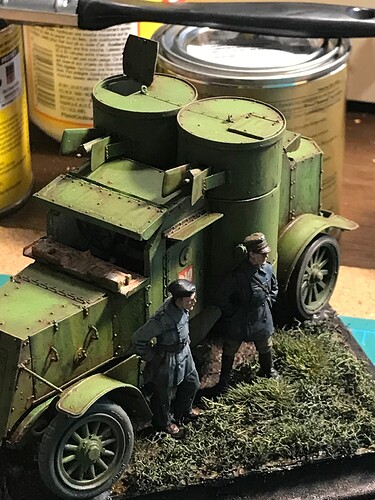 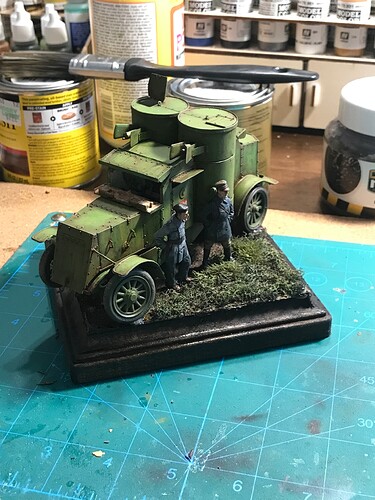 Here’s a couple of shots from the WIP piece: 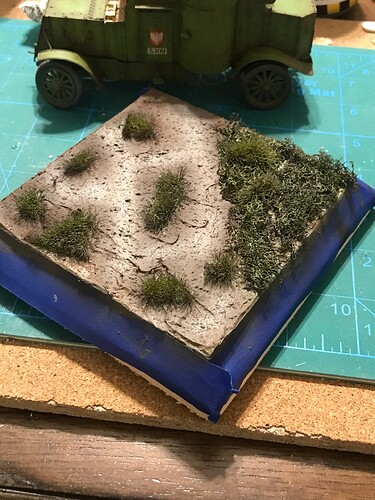 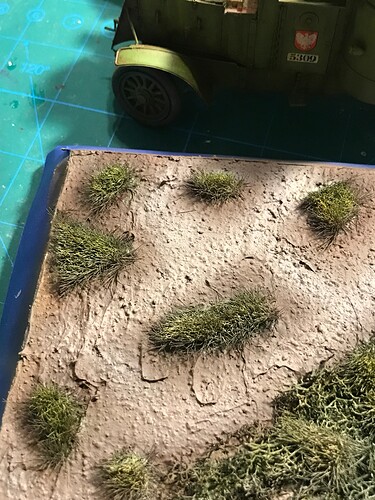 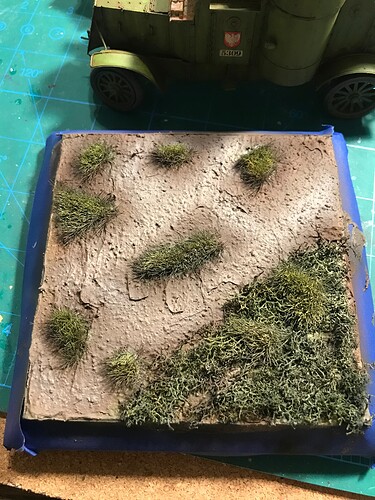 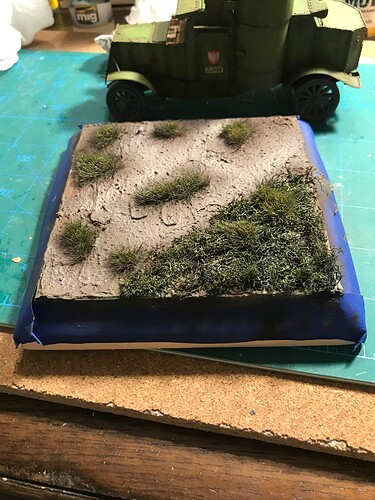 @Panzer_modeler thank you, I’ve been steadily trying to improve my modulation and weathering techniques over the past year!

Great subject. Prit Buttar wrote a great book about these conflicts if you’re not familiar with them already…

@phil2015 i have some limited knowledge. In the past 5 months i did buy the osprey publishing book on the subject and the Warsaw 1920 by Adam zamoyski book, i still need to give it a read but it’s something fresh and new to study.

Gregory that really looks great! You certainly have improved your finish and weathering work and the groundwork looks excellent. Keep up the good work!

It was an important war … not only for Poland …

Let me elaborate on Prit Buttar a little more. I don’t know much about him, but I gather he’s a doctor based in the UK who took an interest in eastern european history. He’s written two or three books on the Ukraine in WW2. And he’s written several books on the “eastern” front (from a German perspective) in WW1 that extends into the conflicts that continued after the Russian withdrawal from the war. I find him an excellent writer. Our library system (Chicago suburbs) had the WW1 set and I put in the suggestion with my local library to pick up the Ukraine in WW2 titles. I thought I knew a fair bit about WW1 but this made me realize I really knew next to nothing about Russia, Austria, and Germany in that conflict.

@metalhead85 thank you, It’s been fun learning new techniques and using them. YouTube and help from @Chris_Bryan have been paying off dividends.

@PiotrK i agree, from my understanding of the war it was big for all of Europe. If i remember correctly wasn’t there a thought that they would push all the way to Berlin if possible?

@phil2015 I’ll have to give him a look. World war I is a subject I’m not we’ll read up on. I have taken some interest in the history of Gallipoli and am currently finishing up “Achtung Panzer.” I will say there is a lot i still don’t know, in recent years i have taken more interest to the wars that occurred during the 20s and 30s. Learning about the freikorps and the various rebellions. The books on Ukraine in world war 2 would be interesting as well but I’ve never taken in interest to World War I eastern front history. Thank you for the suggestions i think my library is going to expand again lol!

I think it would open the way to the whole of Europe, not only to Berlin …

@PiotrK now that would of been a different history for Europe

Very nice result, the base is also outstanding!

@Agriamodeling thank you, this is my first time not using styrofoam to create a base. Instead I just put ammo migs mud effects straight on the base. I wasn’t to sure of the outcome but i love how it looks. After building the groundwork and weathering it i stained the wood base and gave it a finish.

That is definately some beautiful work