Planning on building a 20th Pursuit Group P-40 from Hamilton Field around December 7(but pre May 42). What USN/USMC squadrons were based on the US West Coast at the time? (preferably Northern Cal/ Bay area) And where? The Pacific based carriers must have had shore bases for the aircraft when not at sea.(Like the F-18s at NAS Lemoore these days) Shore based replacement air groups. Shore based USMC squadrons. I’d like to do a naval fighter to go with the P-40 for the dark days after Pearl Harbor.

I will have dig around as during that timeframe June 41 - May 42 there was lots of changes in Marine Aviation.

NAS Alameda, and NAS North Island were two of many pre WWII air stations for Carrier Air Groups in existence at the time of Pearl Harbor on the West Coast. IIRC, Miramar was a MCAS and not NAS in 1941. Naval Aviation was expanding at the time, but lacked trained pilots and aircraft, so actual squadrons were barely enough for what carriers were out at sea with the fleet. Hornet, being commissioned in October 1941, was just getting together with her newly formed Air Group 8 in Norfolk during December of that year. Saratoga had just completed some refit in San Diego immediately before Pearl Harbor, so her Air Group was either on board or at NAS North Island at that same time.

I read Moffett Field was actually under Army control … result of some inter service pissing contest over North Island in San Diego. After Pearl Harbor the Navy said they wanted it back for the blimp hangers. Army said no War Dept said “you WILL give it to the Navy!!”

This site will give you the location and history of all airfields in California. Most have photos, maps, etc.

Side question… Decal set I am pondering has markings for 55th PS, 20th PG. Allegedly they are from 1940/ early 41. They have the aircraft number in yellow on the upper port wing. Photos of other Group aircraft (77th and 79th squadrons) dated 1941 (but not what month) dont seem to show the numbers. Any ideas of when the port wing numbers were used? When did they phased them out? As near as I can tell markings for the 20th (using the 1941 photos) should be national markings with red dot on 4 wing positions, red/white/blue rudder, yellow group/ aircraft number on vertical tail, squadron emblem below cockpit. Sound right?

The group and plane in group number were phased out sometime soon after Pearly Harbor, I’d have to dig out my Air Force Colors Vol.1 to get any dates. Prior to the Dec.7th, national cockades were worn in the four positions on camouflaged US aircraft- the fuselage sides, plus left upper and right lower wing. And there were the unit ID and plane in group numbers on the tail(s) and upper wing surface, supposed to be in black, but also seen in Yellow. Unit badges were not supposed to be carried, but some units still did use them briefly stateside. After the attack on Pearl Harbor, the second pair of wing stars and red & white rudder stripes were added for aircraft in the PTO, and primarily Navy, but some USAAF aircraft operating under USN commands such as CINCPAC.

Interesting. Unfortunately, not much on units/ aircraft/ markings late 41- March 42 era. Other than 20th Pursuit Group (Hamilton Field) and John Bulushi over L.A , not sure what fighter aircraft were on the West Coast to keep the Zeros at bay. 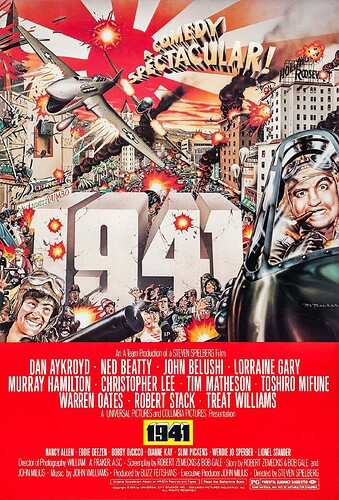 Here is what was where from the USAAF on December 7

Now that is handy. It’s kinda wonky how they list things though. For Hamilton they list 7th Bomb then 20th Pursuit groups , then 9th, 11th bomb squadrons, 12th Transport, 22nd Bomb Sqn, 55th,70th 77th, 79th Pursuits like they were all independent. 55th,77th, 79th PS were the 20th PG (70th was formed at Hamilton as part of 35thPG, Other 2 squadrons were in the Philippines, 70th on the way , when the Japanese attacked. The 70th was returned to Moffett Field) . Bomb squadrons were parts of the BG. (One of the Bomb Squadrons, on the way to Hawaii, was the one the radar guys on Oahu mistook the Japanese attack for.) Bulushi must have been outta March Field.

Click on the day, month and year (e.g., 2 Feb 1942) to view the Location of U.S. Naval Aircraft report for that particular timeframe.    NOTE: All of these records are unclassified or have been declassified. Due to the age of the records,...

The Navy and Marines were even thinner than I thought. The only trained fighters on the whole West Coast were in San Diego! And only F2A Buffalos for the most part at that. At least until Spring of 1942. Nothing at San Francisco or Seattle in the way of USN/USMC fighters. Wow! The sole replacement air group was in Norfolk. It’s amazing how by two years after Pearl Harbor that had changed exponentially.

I agree. I wonder if it is missing/not describing all aircraft correctly. As Wake Island Marines has F4F’s, don’t think they were the only squadron to have them on the West Coast.

I am not surprised by Marine units only being in SD. Even afterwards LA is the furtherest north I recall.

I know off the top of my head 2 VMSB squadrons were formed/ trained out of Santa Barbara. As for the Bay area, Moffett was an Army facility till March or May of 42. I know the Navy had a number of facilities along the coast from mid 42 on but mots were patrol . I think most training was handled in the Gulf Coast area. Lack of fighter types may have been a case of the Navy saying " We have the carriers to get the fight to the Japanese. You stay here and guard the fort." (Hold my beer!) Marine Corps Air Station Santa Barbara (MCAS Santa Barbara) was a United States Marine Corps air station that was located in Goleta, California 70 miles (113 km) north of Los Angeles during World War II. It was also known as the Goleta Air Station in the 1940s. Commissioned on December 4, 1942, the air station consisted of an airfield that had been built into the Goleta Slough and served as a training base for numerous squadrons before they deployed to support combat operations in the Pacific In...

Yeah, UC Surf Board!!! And you thought it stood for University of California, Santa Barbara???